The Power of Nāda Yoga

There is a universal language, beyond words, culture, sex or nationality. A language of the heart that cuts across all difference and connects us to something greater than ourselves. That language is music. Sound is our connection to our deepest being. It connects us to a higher consciousness, but also to our primal selves. Each one of us has access to this innate power of sound through our voice.

The ancient Indian system of Nāda Yoga is a science of inner transformation through the power of sound. Nāda or Nād yoga is the conscious use of sound vibrations, like chanting, mantra and musical resonances to treat various spiritual and psychological conditions. Practitioners focus their mind in meditation and then use sound to access higher states of consciousness and healing.

From human DNA to bacteria and worms, from the Earth to solar systems and distant galaxies and from the newborn stars to the black holes, everything has its own sound and music. – The Nāda Yoga School in Rishikesh

Ancient Indian teachings say the whole world emerged from the original sound: the sound of creation. Nāda Yoga is a metaphysical system that is based on the belief that the entire cosmos and all that exists in the cosmos, including human beings, consists of sound vibrations, called nāda. Quantum physics has now proven what these spiritual masters knew, that matter and sound are intimately connected. Science shows that not only does everything in the universe possess a basic vibration and interact with other vibrational fields, but that vibration actually affects matter. 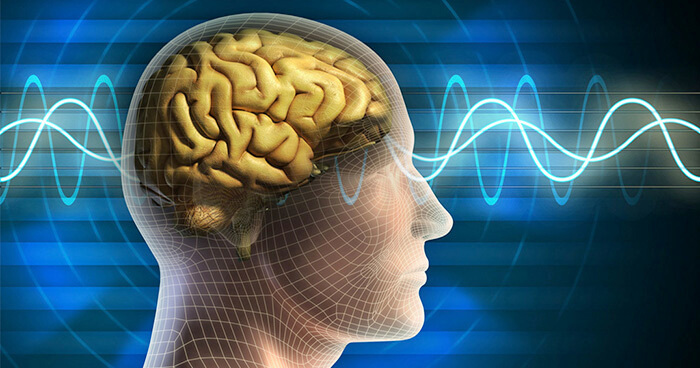 Sound is our connection to our deepest being.

In ancient times words and music were used to attain an altered state of mind. Music was an aid to develop the mind, spirit, emotions and sensitivity. In this modern age different forms of music have developed, like rock, heavy metal, jazz, etc., but until recent times music was used not to please the mind but to tranquillize the agitations of the mind. — Swami Niranjanananda Saraswati

I’d always heard that sound waves have form, and that sound creates matter. While I could accept this, I had no experience of it. This all changed in a radical way when while attending a year-long sound healing training, I experienced something amazing. The facilitator hooked up a large speaker to a music player. She then covered the speaker with cling wrap and poured talcum powder all over the top of the cling wrapped speaker. She then played different tones and within minutes, the powder started moving into geometric shapes as the sound vibrations came through the speaker. It was quite incredible. I saw firsthand how sound frequencies affect matter. If sound can move salt, sand, powder particles or water molecules into particular shapes, it is doing the same with our cells. A sound is basically a vibration that creates a wave of pressure that travels through air, water, or solids, and by harnessing this vibration, as Nād Yoga does, we can have a powerful effect.

Nād yoga is a union of the self through sound. Mantra harnesses the power of Nāda Yoga, as does meditating to the vibrational energy of instruments such as the tabla, the harmonium or the Tibetan singing bowls. Nāda Yoga is described as the most immediate path for reconnecting the human being with the divine core of his or her being. Nada Yoga is considered to be an essential component of all yoga disciplines and the Yoga Pradipika describes it as one of the most powerful and fruitful meditation techniques to calm the mind. 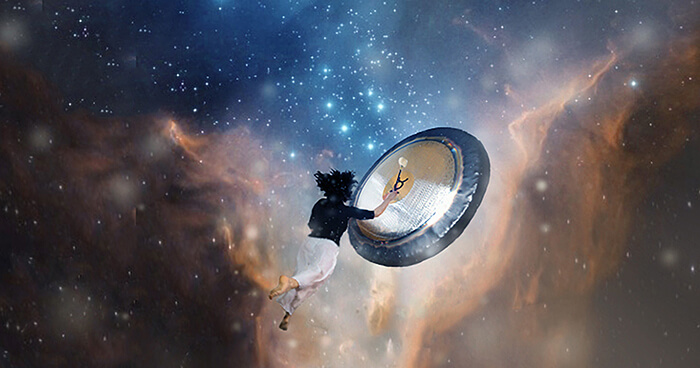 Nād Yoga is a union of the self through sound.

One who desires true union of yoga should leave all thinking behind and concentrate with single-pointed attention on the nāda. – Hatha Yoga Pradipika 4.93

There are four types of Nāda Yoga: Vaikhari, which means audible sound that can be heard by the human ear. It is the sound of speech, song and when two things strike each other (eg. instruments), and is the grossest level of sound. Madhyama is mental sound, and is more subtle than vaikhari. Pashyanti is subconscious sound or what is known as a visual sound. It could be a dream or visualisation of sound. And Paranada is transcendent sound that is beyond the senses and the mind and can also be heard in different dimensions.

Nāda Yoga incorporates all forms of sound or music. This science of sound involves becoming aware not only of audible frequencies but also of frequencies that are inaudible to our ears. It is said that this path of yoga is the one to which all forms of yoga eventually lead. Sound is a powerful healing force and it can remove blockages in our energy system and us back into balance.

Nāda means flow of sound and yoga means Union. Nāda Yoga is the process of the union of the individual mind with cosmic consciousness through the flow of sounds. – Nāda School of Yoga Rishikesh

Nāda Yoga works on the principle that everything is vibrating, and diseases are disharmonies in our systems. You can think of discordant harmonies and how they make us feel and that is akin to the disharmonies in the physical body. The music of the body has literally gone out of balance. But, we can utilise our voice and sound to bring back equilibrium. 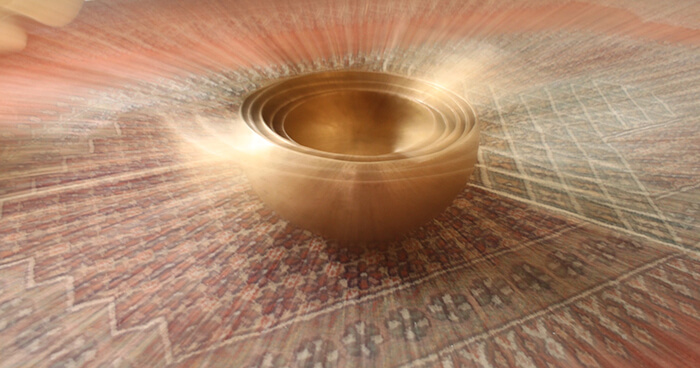 Nāda Yoga works on the principle that everything is vibrating.

Unresolved emotions and desires are stored as toxins in our energy channels, or nadis. When we use sound consciously we can create a profound effect on our health. Nāda Yoga’s use of sound vibrations and resonances have a healing effect on problematic psychological and spiritual conditions and can regulate the immune system through the powerful effect it has on our thoughts and emotions. Mantra, rhythm and breath, when used together, can create a healing response in the immune system as backed up by science. Many studies have shown that brain waves are influenced by sound, music, chanting and meditation. Nāda Yoga can also help relieve tension, high blood pressure, insomnia and negative mind states, as well as evoke the deeply restorative and relaxing alpha and theta brain wave patterns.

Kirtan, sacred devotional singing, helps us to experience a state of spiritual bliss and oneness. It is a way of expressing our feelings and connecting deeply with others. Singing regulates our breathing and releases stress. Nāda Yoga is not about professional singing, it is about the pure sound that comes direct from our inner core.

Creation is not something that happened millions of years ago. It is happening now and it is an ongoing process. We create every time we have a thought, move a muscle or speak and sing–especially sing. – Sannyasi Krishnadhyanam

An initial Nāda Yoga practice you could experiment with, before moving onto a more advanced practice as outlined below, is to practice humming meditation or Bhramari Pranayama, where you place the thumbs over the ears, closing them, and bring the little fingers to rest lightly on the third eye. Closing the eyes, take a few deep breaths and then on your next exhalation emit a humming sound (much like a bee), directing your full attention to the humming sound. 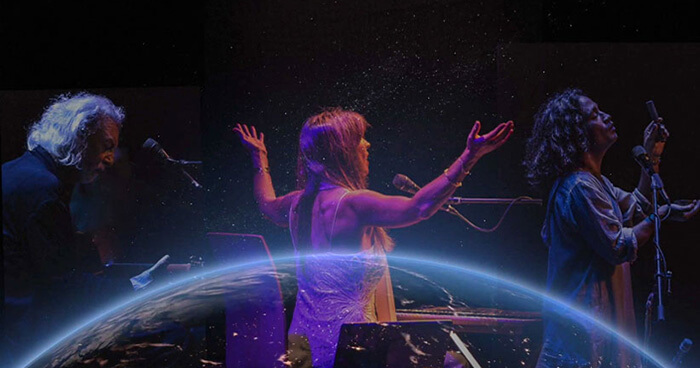 Mantra, rhythm and breath create a healing response in the body. Image: Deva Premal and Miten

You can begin the practice of Nāda Yoga by listening to external sounds like music, preferably soothing and beautiful instrumental music. Sit quietly and focus your full attention on the music, allowing yourself to be immersed deeper and deeper into the sounds. After some time of practicing this meditation, gradually direct your attention inwards and towards your inner subtle sounds. You will become aware of your inner sounds and then you can bring your full concentration to these sounds. The meditation will become increasingly about listening to these inner sounds and you can turn the external music down and eventually off. Relax your body and mind into deep meditation for as long as you choose to and then gently come back to a wakeful state when you’re ready.

You can also easily balance your chakra system through using the mantras for each chakra in the ancient Vedic Chakra Meditation known as Chakra Dhyana. Sitting comfortably with your back straight being with several rounds of pranayama and then chant the seed syllable for each chakra at least seven times, moving up from the base chakra to the crown, whilst visualising the particular chakra and then imagining the kundalini rising. The seed tones for each chakra starting from the base and moving upwards, are: Lang, Vang, Rang, Yang, Hang, Om and Ogum Satyam Om.

Nāda Yoga is a powerful way to deepen your spiritual practice and discover greater inner peace, clarity and union with the Divine.

Sacred sound has the power to connect and heal. Sign up to the free Yoga Day Summit 2018 and watch UPLIFT’s new film ‘The Power of Mantra’.