The Science of Yin Yoga

The long-held, deeply restful postures of Yin Yoga provide a welcome contrast to the more dynamic, Yang dominated practices that are popular in the modern, Western world. A remedy to our fast-paced lifestyles, Yin is a practice that encourages people to slow down–immersing in the kind of stillness that can lead to the expansion of consciousness.

Today’s Yin Yoga is highly influenced by the philosophies of Traditional Chinese Medicine (TCM), which say that the body contains meridians–invisible energy highways that carry Qi (energy). The physical postures of Yin are said to work with these meridian lines to improve health and wellbeing.

Western science is also discovering the impact of the practice on a physical and psychological level. Yin creates the space to activate the parasympathetic nervous system (our rest and digest) and the longer holds work to unwind the body’s deeper layers of fascia (as opposed to working with the muscles in more dynamic movements). As we work with these layers, we create the conditions to release deeply held tension in the body and mind.

The Evolution of Yin as a Yoga Practice

The introduction of Yin Yoga to the West happened in the 1970s and is credited to yogi and martial artist, Paulie Zink. The roots of Zink’s practice are in Taoist Yoga, where Hatha Yoga poses are held for longer periods of time. The current style of Yin Yoga, however, was popularised by Paul Grilley and Sarah Powers, who have infused more Traditional Chinese Medicine and anatomical science into the practice. 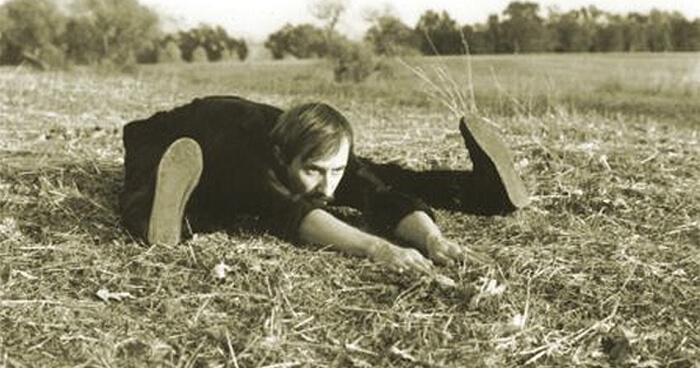 The meridian theory Paul Grilley used is over 2500 years old and originates in China… It is based around the idea of Qi, which is erroneously translated as energy.

Sarah Powers, who was teaching at the same studio with Paul, “came to love the quiet floor poses that Paul was teaching”, says Robinson. He says, “Sarah suggested that… they should call these long-held, floor poses Yin Yoga… Paul and Sarah then taught the Yin Yoga practice to a growing number of students and it eventually became the practice we have today.”

Traditional Chinese Medicine is a system in which practitioners use herbal medicines and mind-body practices, such as acupuncture and Tai Chi, to treat health ailments and enhance wellbeing. In these Chinese systems of health, meridians are said to be channels throughout the body that direct the flow of Qi through an interconnected network that forms a complete energetic circuit. Qi can be weak, strong, agitated or balanced, and this impacts on our physical and emotional health.

Each meridian is associated with a different internal organ, and therefore the health of this organ is affected by the way that energy flows. For example, author of Brightening Our Inner Skies: Yin and Yoga, Norman Blair, says:

If the stomach meridian is blocked, we could feel nervous and unable to feel satisfied with receiving support. If there’s an imbalance in the Liver meridian, this manifests as anger and a feeling of hopelessness. 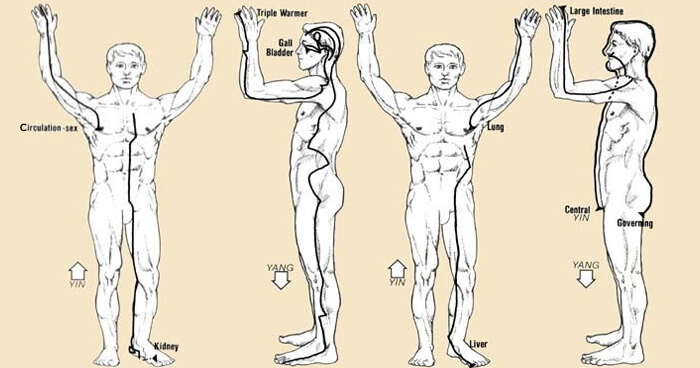 Yin Yoga affects our meridians–channels of Qi that run throughout our bodies.

According to these philosophies, there is no difference between our physical and emotional health–they are interconnected. Hence the health of the organs has a direct impact on our emotions, and vice versa.

When Paul Grilley delved into these traditional Chinese philosophies, combined with yoga asana, he discovered that certain yoga postures could impact the meridians and the way that Qi flows through them. Blair explains:

Certain Yin poses have greater influence on certain meridians and it is possible to construct a Yin Yoga practice that is based on this knowledge. In Butterfly, we strongly affect the Kidney meridian and the Bladder meridian. Frog accesses the Spleen meridian, supporting our creative potential.

The Anatomy of Yin

Sarah Owen is one of the leading Yin Yoga teachers in Australia and has been mentored by Sarah Powers for over a decade. She explains that the lower parts of the body, as well as the internal tissues, are more related to Yin Yoga than the upper body or the external tissues, such as muscle. She says:

“The more internalised tissues are best nourished when the muscles are not engaged but instead kept relaxed, and when the poses are held for longer periods.”

One of these internalised tissues, and a word we often hear associated with Yin, is fascia. Author of Fascia–What It Is And Why It Matters, David Lesonak, explains that fascia is like “a silvery-white material, flexible and sturdy in equal measure–a substance that surrounds and penetrates every muscle, coats every bond, covers every organ, and envelops every nerve.” He explains:

The most important thing to keep in mind… is that the fascial net is one continuous structure throughout the body…The ‘everywhereness’ of fascia also implies that, indeed, it is all connected, and thus is ‘connective tissue’, which is a term often used interchangeably with ‘fascia’. 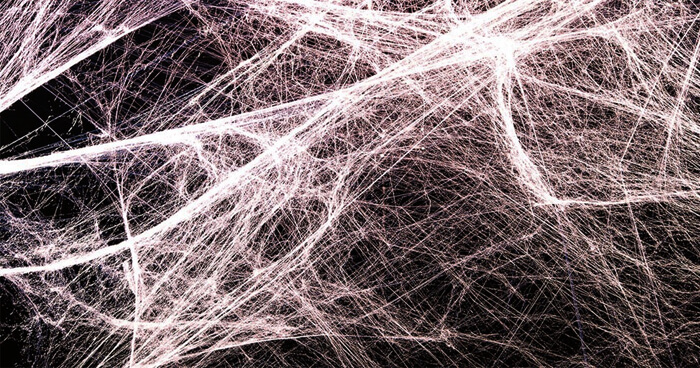 Fascia surrounds every muscle, covers every organ, and envelops every nerve.

Erin Bourne holds a Bachelors of Exercise Science, as well as extensive training in Yoga and Myofascial release. She teaches the anatomy of Yin Yoga on teacher trainings and is currently writing a book that looks at Yin poses from a physiological, energetic and meridian perspective. She explains that if we stop moving parts of the body in particular directions then the fascia begins to dehydrate, solidify and constrict. She says:

Think of a kitchen sponge that’s left to dry for days. It has no spring or flexibility. Yin Yoga lengthens the fascia, releasing the stuck spots and allowing the tissue to rehydrate and glow again (like soaking the sponge).

Fascia needs at least 120 seconds of sustained pressure to start to change. “This is why Yin, with its long pose holds, actually lengthens the fascia,” says Bourne.

Bourne explains that the poses in Yin Yoga also work the lines of the meridians, opening the whole length of a meridian and bringing light (Qi) to those dark spots in the body. Recent research has confirmed that 80% of meridian points in the arms correspond to the fascial planes, indicating a link between these Eastern and Western philosophies.

Robinson illustrates the importance of remodeling this connective tissue through adopting a dedicated Yin Yoga practice, to counteract the effect of how we hold our body in our daily life:

We all practice Yin all day every day, in whatever pose you adopt the most. Your body will see this as an important posture for it to hold and so will alter its structure to support your activities.

Yin and the Nervous System

Simon Borg Olivier is a long time yoga teacher, physiotherapist and university lecturer. He acknowledges that many of the fitness-dominated practices we see today are putting practitioners into fight or flight mode; activating the sympathetic nervous system and inevitably leading to anger, aggression and competitiveness. In contrast to these heart rate increasing practices, Yin Yoga works to activate our parasympathetic nervous system, which allows us to rest and digest. Simon says:

I believe that if you are doing real yoga then you should be feeling love, happiness and safety while you are practicing, not only in your relaxation after your exercise… To generate yoga on a physical level by improving blood flow without needing to increase heart rate is not only possible but it is the way of healthy people and the way of real Hatha Yoga. 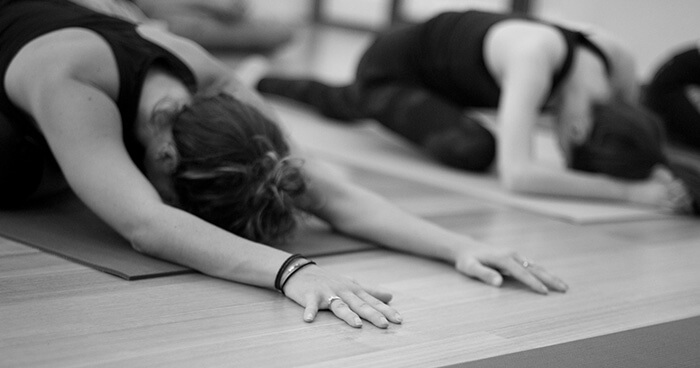 Yin Yoga activates our parasympathetic nervous system, which allows us to rest and digest.

Tara Fitzgibbon, one of the most well known Yin Yoga teachers in Australia, agrees. “Yin yoga gives us permission to be still. It provides balance against all of life’s Yang activities, and allows us to reach deeper levels of rest, which open us up to higher consciousness.”

Yin and the Mind

The ‘mood’ of a Yin Yoga practice is one of self-acceptance, compassion, and simply being present, rather than an attitude of striving to improve ourselves or berating ourselves for any difficulties that may arise. Instead, the practice becomes like a meditation in which one can observe mental habits and accustomed ways of reactivity. The Yin Yoga practice creates a ‘holding space’ to practice mindfulness or other meditation practices, and to observe the inner and outer experiences as they arise. – Sarah Owen

As both Eastern and Western science are unveiling, when we relax in Yin Yoga, we begin to heal the body’s deeply held tensions and change the patterns that leave our body constricted, and impact our emotional health. As we progress through these physical, emotional and spiritual layers, the opportunity for expanding our consciousness easily follows.

The Powerful Benefits Of Yin Yoga For The Body And Mind

Wonderful story, reckoned we could combine a couple of unrelated data, nevertheless actually worth taking a appear, whoa did one particular discover about Mid East has got much more problerms too.

[…] wall (viparita karani) or final resting pose (savasana) for 5 minutes can help to ease the body. The Science of Yin Yoga | UPLIFT delves into […]

This article will help the internet people for setting up new website or even a blog from start to
end.

I am not real fantastic with English but I come up this very leisurely
to translate.

This is the right website for anybody who wants to find out about this
topic. You understand a whole lot its almost hard
to argue with you (not that I personally would want to?HaHa).

You definitely put a fresh spin on a topic which has been written about for ages.
Excellent stuff, just great!

I have read some just right stuff here. Certainly
worth bookmarking for revisiting. I surprise how a lot effort you place to create such
a great informative website.

I like this weblog very much, Its a very nice situation to read and
find info.

Thank you for the auspicious writeup. It in fact was a enjoyment account it.
Glance complicated to more introduced agreeable from you!
However, how could we communicate?

Good info and straight to the point. I don’t know if this
is really the best place to ask but do you people have any ideea where to get some professional
writers? Thx 🙂

Glad to be one of several visitants on this awe
inspiring web site :D.

Thanks a lot for being my own tutor on this topic. My spouse and i enjoyed your article greatly and most of all preferred how you really handled the issues I widely known as controversial.
You’re always incredibly kind to readers like me and aid me in my everyday living.
Thank you.

Thank you for this short succinct description of Yin. I plan to give it to my students.

Thank you for explaining deeply what really is yin yoga and its benefit to our body.

I think it’s important to note here that not all yoga outside of the yin style is fitness/yang/aggravating to the nervous system. A well-balanced class should have dynamic strengthening postures and flows to prepare the body for deeper longer holds. This helps to release tension in the muscles and the mind, and creates “stretch receptivity” in the body tissues. For many yoga practitioners in the west the practice style that will serve them the most over the course of their life will be one that undoes the evils of sitting and develops strength first of all. Once the body’s support structure is awakened through dynamic strengthening, the muscles will be willing to relax. We are struggling with muscles that feel tight because certain ones are over-recruited and many others are shut down and weak. Balance the strength and alignment first! Otherwise those long holds will lead to more joint instability and dysfunction.

So what is the difference between yin yoga and restorative yoga…you hold the pose too?