Tips from Gandhi on Changing the World

“You must not lose faith in humanity. Humanity is an ocean; if a few drops of the ocean are dirty, the ocean does not become dirty.”

“The difference between what we do and what we are capable of doing would suffice to solve most of the world’s problem.”

“If I had no sense of humor, I would long ago have committed suicide.”

Mahatma Gandhi needs no introduction. Everyone knows about the man who lead the Indian people to independence from British rule, back in 1947.

And the problem with changing your outer world without changing yourself first is that you will still be you when you reach that change you have strived for. You will still have your flaws, anger, negativity, self-sabotaging tendencies etc.

And so, in this new situation, you will still not find what you hoped for, since your mind is still seeping with that negative stuff. And without having some insight into, and distance from your ego, this negative stuff may grow more powerful. Since your ego loves to divide things, to find enemies and to create separation, it may start to try to create even more problems and conflicts in your life and world. 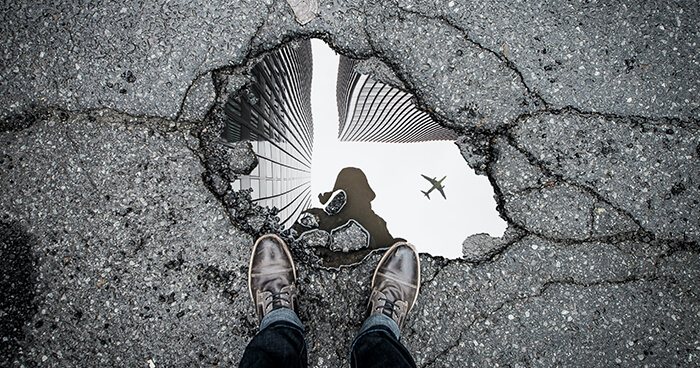 You must be willing to look deep within yourself and make changes there first. Image: Marc-Olivier Jodoin

You Are in Control

“Nobody can hurt me without my permission.”

What you feel and how you react to something is always up to you. There may be a ‘normal’ or a common way to react to different things. But that’s mostly just all it is.

You can choose your own thoughts and reactions to pretty much everything. You don’t have to freak out, overreact, or even react in a negative way. Though sometimes a knee-jerk reaction just goes off, or an old thought habit kicks in.

But as you realize that no-one outside of yourself can actually control how you feel, you can start to incorporate this thinking into your daily life. You can develop it as a thought habit; a habit that you can grow stronger and stronger over time. Doing this makes life a whole lot easier and more pleasurable.

Forgive and Let it Go

“The weak can never forgive. Forgiveness is the attribute of the strong.”

“An eye for eye only ends up making the whole world blind.”

Fighting evil with evil won’t help anyone. And as said in the previous tip, you can always choose how to react to something. When you incorporate this thought habit more and more into your life, then you can react in a way that is more useful to yourself and others.

You realize that forgiving and letting go of the past will do you, and the people in your world, a great service. And spending your time in some negative memory won’t help you after you have learned the lessons from that experience. You’ll probably just cause yourself more suffering and paralyze yourself from taking action in the present moment.

If you don’t forgive, then you let the past and this other person control how you feel. By forgiving, you release yourself from those bonds.

Without Action, You Aren’t Going Anywhere

“An ounce of practice is worth more than tons of preaching.”

Without taking action, very little will be done. However, taking action can be hard and difficult; there can be much inner resistance.

And so you may resort to ‘preaching’, as Gandhi says. Or reading and studying endlessly. And feeling like you are moving forward, but getting little or no practical results in real life. 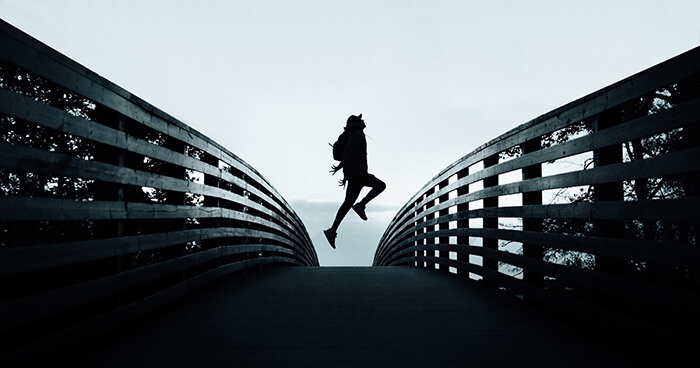 Forgiveness of yourself and others frees you from unnecessary pain and suffering. Image: Steven Erixon

So, to really get where you want to go and to really understand yourself and your world, you need to practice. Books can mostly only bring you knowledge; you have to take action and translate that knowledge into results and understanding.

Check out the next point to find out how to take more action in your life.

Take Care of This Moment

“I do not want to foresee the future. I am concerned with taking care of the present. God has given me no control over the moment following.”

The best way that I have found to overcome the inner resistance that often stops us from taking action, is to stay in the present as much as possible and to be accepting.

Why? Well, when you are in the present moment, you don’t worry about the next moment, which you can’t control anyway. The resistance to action – that comes from imagining negative consequences of an action, or reflecting on past failures, loses its power. And so it becomes easier to both take action and to keep your focus on this moment, and perform better.

Remember, reconnecting with and staying in the now is a mental habit – a sort of muscle – that you can build. Over time it becomes more powerful, which makes it easier to slip into the present moment.

“I claim to be a simple individual liable to err like any other fellow mortal. I own, however, that I have humility enough to confess my errors and to retrace my steps.”

“It is unwise to be too sure of one’s own wisdom. It is healthy to be reminded that the strongest might weaken and the wisest might err.”

When you start to make myths out of people – even though they may have produced extraordinary results – you run the risk of becoming disconnected from them. You can start to feel like you could never achieve similar things that they did because they are so very different. So it’s important to keep in mind that everyone is just a human being, no matter who they are.

And I think it’s important to remember that we are all human and prone to making mistakes. Holding people to unreasonable standards will only create more unnecessary conflicts in your world and negativity within you.

It’s also important to avoid falling into the pretty useless habit of beating yourself up over mistakes that you have made. Instead, try to see with clarity where you went wrong and what you can learn from your mistake. And then try again. 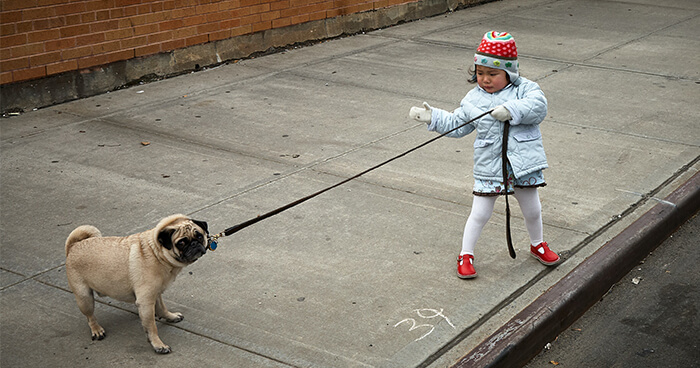 Never. Give. Up. Image: Vidar Nordli-Mathisen

Be persistent. In time, the opposition around you will fade and fall away. As a result, your inner resistance and self-sabotaging tendencies that want to hold you back and keep you like you have always been will grow weaker.

One reason Gandhi was so successful with his method of non-violence was because he and his followers were so persistent. They just didn’t give up.

Success or victory will seldom come as quickly as you would like it to. I think one of the reasons people don’t get what they want is simply because they give up too soon. The amount of time they think an achievement will require isn’t the same amount of time it usually takes to achieve that goal. This faulty belief partly comes from the world we live in. A world full of magic pill solutions, where advertising continually promises us that we can lose a lot of weight or earn a ton of money in just thrity days.

Another useful tip to keep your persistence going is to refer back to the third quote in this article – keep a sense of humor. It can lighten things up at the toughest of times.

See the Good in People and Help Them

“I look only to the good qualities of men. Not being faultless myself, I won’t presume to probe into the faults of others.”

“Man becomes great exactly in the degree in which he works for the welfare of his fellow-men.”

“I suppose leadership at one time meant muscles; but today it means getting along with people.”

There is pretty much always something good in people, and also things that may not be so good. But you can choose what things to focus on. And if you want improvement, then focusing on the good in people is a useful choice. It also makes life easier for you, as it can make your world and relationships more pleasant and positive.

And when you see the good in people, it becomes easier to motivate yourself to be of service to them. By being of service to other people; by giving them value, you not only make their lives better, over time you tend to get what you give. And the people you help may feel more inclined to help other people. And so together, you create an upward spiral of positive change that grows and becomes stronger.

By strengthening your social skills you can become a more influential person and make this upward spiral even stronger. Read on to find out how.

Be Congruent, Be Authentic, Be Your True Self

“Happiness is when what you think, what you say, and what you do are in harmony.” 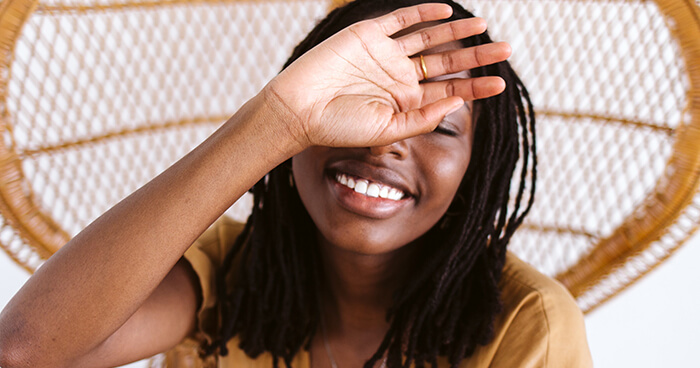 Just be yourself. You will make mistakes, but that is how you learn and grow. Image: Joanna Nix-Walkup

“Always aim at complete harmony of thought and word and deed. Always aim at purifying your thoughts and everything will be well.”

I think that one of the best tips for improving your social skills is to behave in a congruent manner and communicate in an authentic way. People seem to really like authentic communication. And there is much inner enjoyment to be found when your thoughts, words and actions are aligned. You feel powerful and good about yourself.

When words and thoughts are aligned, it shows in your communication because your voice tonality and body language – some say they are over ninety percent of communication – are in alignment with your words.

With these channels in alignment, people tend to really listen to what you’re saying because you are communicating without incongruency, mixed messages or phoniness.

Also, if your actions aren’t in alignment with what you’re communicating, then you start to hurt your own belief in what you can do. And other people’s belief in you too.

Continue to Grow and Evolve

“Constant development is the law of life, and a man who always tries to maintain his dogmas in order to appear consistent drives himself into a false position.”

You can pretty much always improve your skills and habits or re-evaluate your beliefs, and by doing so, you can gain a deeper understanding of yourself and the world.

Sure, you may look inconsistent or like you don’t know what you are doing from time to time. You may have trouble acting congruently or communicating authentically, but if you don’t then you will drive yourself into a ‘false position’, as Gandhi says. A place where you try to uphold or cling to your old views to appear consistent, while you realise that within yourself, something is wrong. It’s not a fun place to be. To choose to grow and evolve is a happier and more useful path to take.