Darwin showed us that those who are generous, altruistic and compassionate are the ones who not only survive but also thrive.

Is it possible for the very essence of agonizing loss to bring about the epitome of loving-kindness?

Most remember the tragedy at Sandy Hook where twenty grade one children and six educators were murdered in a little elementary school tucked away in a small New England town on a cold wintery day in December of 2012. The world collectively gasped in shock at the horror and hugged their kids a little tighter that evening as the international media coverage highlighted gory scenes of death and suffering, anger and blame.

Something else was quietly unfolding however behind the scenes, the tragedy having cultivated a seemingly unprecedented generosity of spirit pouring forth from people all over the world.

I know this because I am one of the victim’s parent.

Leaving the school that day without my son was unbearable. Getting into my car and glancing at the car-seat where Jesse sat just the day prior was indescribable. Thank goodness for the shock that numbed me enough to function at a limited capacity. The next few days were a whirlwind of notifications, funeral arrangements, media requests, along with a slow dawning of the gravity of what was lost.

How the World Chose Love

In tandem, however, was a swelling of worldwide collective compassion that began to manifest along the sidewalks leading away from the school and flowing into the quaint downtown hamlet.

A woman from Texas sent twenty-six Christmas trees that were placed equidistant on what became a destination for many from around the world who felt compelled to come to the site to mourn with the community. Gifts were placed by those passing by beneath the personalized trees. Decorations began to appear, flowers, intricately carved sentiments and ornaments with the children’s names. My family and I visited Jesse’s tree several times during the next few weeks, from the back of a state trooper’s car that would weave in and out of the heavy visiting traffic, lights flashing, quietly grieving passengers in the backseat looking out at fellow mourners. 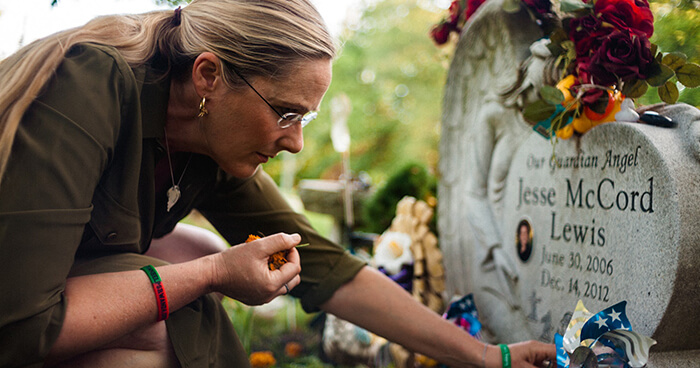 A swelling of worldwide collective compassion began to manifest along the sidewalks. Image: Scarlett Lewis

Cards and packages began arriving at my house, from all over the world. A beautiful outpouring of feelings and emotions, some from parents who had suffered a similar loss. Those compassionate notes brought me so much comfort and taught such poignant lessons that I’ll carry with me always.

Many of the messages came from children, trying to wrap their heads around the unbelievable reality while offering expressions of healing from their point of view. ‘You could be grateful for the time you had!’ ‘You and Jesse will be enjoying Christmas together, it’s just that he will be in heaven.’ ‘Jesse looks like a great kid. I play soccer too! I wish I could have met him.’ And more…

I loved the thought of these children, obviously, some in first grade, like Jesse, were thinking about my son and getting to know him. Carefully wrapped portraits of Jesse came, each etched in a unique way, and with the artist’s obvious care and concern for the subject, my son. These are hanging all over my house to this day. I appreciated how they took an image of Jesse and portrayed him through their eyes. I sensed and could see the love in each stroke, the careful choice of color and the intricate way they portrayed my son’s expression. It all touched my heart deeply.

The gifts and cards continued to pour in, over half a million, in fact, flooding the post office to the point it had to shut down and divert the mail to a massive regional sorting plant.

Individuals from different countries, cultures, and religions illustrated how we are all the same, in the want to love and be loved.

To Love and Be Loved

Sixty-five thousand teddy bears arrived for a population of twenty-seven-thousand. Local schools mentioned on Facebook that they would like to decorate tractor-trailers with hundreds of thousands of snowflakes poured in, one after another, rivaling any blizzard in our history books. The town resorted to leasing tens of thousands of square feet of warehouses to temporarily store the gifts — Warehouses of Love. They created huge bins for each family and we would visit weekly to see what had been sent to us. We took what we could and by the next visit, the spaces would be filled to overflowing again.

So many gifts, of all shapes and sizes, poured in that they were paid forward, all over the world to children’s hospitals, orphanages and refugee camps. Art supplies, peace poles, paintings, books, you name it, so many felt from their hearts to give. Some were even turned into sacred soil that will one day be the foundation of a memorial for those who lost their life. It was a phenomenal show of compassion and overwhelming generosity, stoked by our humanitarian instinctual need to help one another. 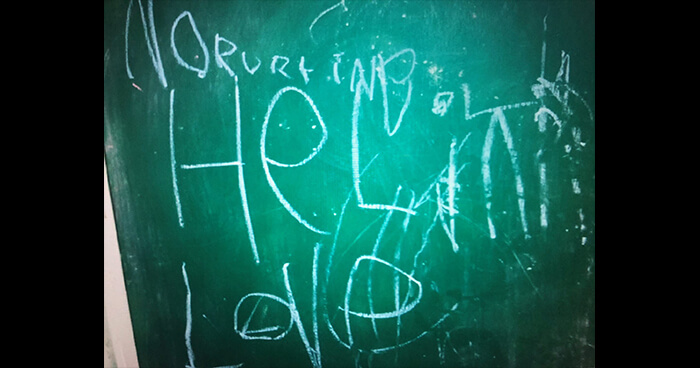 This was the opposite of the familiar credo, ‘Survival of the fittest,’ often attributed to Charles Darwin. However, his famous research on evolution actually found that it would be those most ‘sympathetic’ to one another that would survive and thrive. By sympathetic he meant generous, altruistic and compassionate. This certainly rang true following one of the worst mass murders in the United States’ history. Individuals from different countries, cultures, and religions illustrated how we are all the same, in the want to love and be loved. Empathy emanated from caring individuals that translated into action, ultimately healing the giver and receiver.

It is not the strongest of the species that survive, nor the most intelligence, but the one more responsive to change. – Charles Darwin

Darwin was correct in concluding that it would be survival of the most compassionate and then right again when he stated we must be ‘responsive to change.’ What we’re doing clearly isn’t working when school shootings become as commonplace as epidemics of suicide, substance abuse and mental illness. The shooter, a former student of the same school in which he discharged his isolation and rage, received compassionate expression as well, albeit on a much lesser scale, and too late.

What Sandy Hook Has Taught Me

The lesson from this is to see how we can keep this evolutionary instinct intact every day. Yes, it arises and we are able to come together during suffering. This is something we all understand and have in common as well as the want, and need, to love and be loved. Yet, I long for the day when we feel this yearning from our hearts on a daily basis, in all situations, including conflict and even opposition.

We know love and compassion are the strongest thoughtful response to any situation. It enables us to take our personal power back, even amidst tragedy and choose how we respond.

Sandy Hook is proof that we can all Choose Love.

This outpouring of compassion is proof of inherent unity in the face of devastation. We know the ability to thoughtfully respond with love is there. Now we take that everflowing compassion and utilize its full capacity within each one of us to create the world we want to live in. This entails an individual focus on amplifying love in action each and every day in all situations and circumstances.

We can do this. We must and now is the time!

Take a moment. Take a breath. Allow the ripples of feeling to be present in your body. Let your inner light and compassion choose love for you right now. Alchemise this story which ripples with all sorts of feelings and Choose Love right now. Send that love to all those angels and their family and friends. And then open your heart as it circles back to you. Knowing this story initiates you into the Choose Love Movement. You’re family now… Welcome!

As always we’d love to hear from you in the comments below.