What is the Collective Field?

BY Jacob Devaney
Welcome to UPLIFT
Field of Love
What is the Collective Field?
Together We Rise

The strange thing about the Collective Field is that we rarely consider it, or even know that it is there yet it influences us in huge ways. It is the collective emotional, psychic energy that builds in the unconscious, just beneath the surface of our awareness and bursts into consciousness spontaneously as if it came out of nowhere. An awareness of this internal process can empower you to manifest your highest potential.

The Multiple Discovery Hypothesis concept describes the phenomena of individuals around the world working independently and without knowledge of each other while making the same discovery at practically the same moment. For many years, people thought it was impossible for a runner to break the four-minute mile. As soon as Roger Bannister did it, he gave dozens of other athletes ‘permission’ to do the same within the same year. What is apparent is that there is a collective field of thought/belief that dictates, to some degree, what is possible and these limits are continuously being expanded.

Emerging Into The Conscious Realm

The term most often used is ‘emergent,’ which describes the place where unconscious properties are birthed into the conscious realm. It is a process whereby larger entities, patterns, and regularities arise through interactions among smaller or simpler entities that themselves do not exhibit such properties individually. When we apply this concept to human social systems, we begin to recognize the importance of thinking collectively, as well as individually. This can be difficult in a culture that emphasizes the power of the individual over the collective.

Vladimir Vernadsky used the term ‘Noosphere’ to describe the sphere of human thought as a distinct realm that shapes the physical world and thus the life-forms that inhabit it. In Vernadsky‘s theory of how the Earth develops, the noosphere is the third in a succession of phases, after the geosphere (inanimate matter) and the biosphere (biological life). Just as the emergence of life fundamentally transformed the geosphere, the emergence of human cognition fundamentally transforms the biosphere. 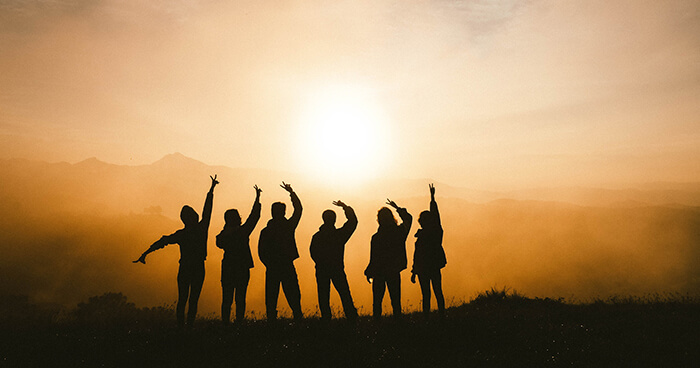 We begin to recognize the importance of thinking collectively, as well as individually. Image: Chang Duong

Together we are the Collective Field

With these ideas swirling through one’s head in contrast to the immense global problems we are facing, it is apparent that a ‘mind-shift’ is in order. We have the ability to bring about transformation and expand our notion of what is possible, but this will only happen when we begin to think collectively.

We all know what it is like to walk into a room full of tension and anxiety, as pressure builds we can feel the potential for violence to break out. Likewise, we know what it feels like to walk into a room that is filled with safety and love. These vibrations and emotions cannot be seen, yet they are very contagious while contributing greatly to what is created within a given space. When people consciously focus their mindful energy together simultaneously towards increasing the vibration for positive outcomes globally, we can alter outcomes.

Lifting Each Other Up

An analogy I love is about a bucket of crabs. Each time one reaches the top and almost escapes, the others pull it right back down into the bucket. We do this to each other when we let jealousy, competition, and pride rule us rather than wishing to lift up those around us. It takes self-awareness to think collectively so that we can separate our own personal insecurities from our desire to see prosperity, success, and healing for everyone. Clearly, we have the potential to push each other down or lift each other up, the choice is ours. What we do for or to others will always eventually come back to us, this is the beginning of understanding the collective field.

The noosphere is global, we are all in the same ‘room’ and each of us affects the collective field. The vibrations of fear and violence are powerful and mostly unconscious. The antidote is a conscious, mindful strengthening of the collective field with love, trust, and gratitude. This is not ethereal or mystical, it is a practical response to the situation we find ourselves in right now on the planet. Some say that humanity is doomed to self-destruct, but people also once said humans could not break the four-minute-mile. Possibilities are endless, the wave of consciousness and transformation is contagious.

Together, we can BE the change.

Guys this article points to a fundamental misunderstanding and misrepresentation of Vernadsky’s Noosphere theory – the cognitive development is not psychic and mankind has changed the biosphere through actions – development of fuel, nuclear fission, plastics and so on not some kind of cognitive psychic ability.
Furthermore, you could very simply look at the fact that many different people indifferent regions (this does not require contact of any kind) were potentially considering the same problem/question at the same time and came to similar conclusions – there is nothing mystical about that unless you want to downplay human ingenuity and inquiry or play up the hero theory – a lone genius comes up with an original idea – which is never the case.
Roger Bannister’s four minute mile achievement was widely broadcast, it’s not a stretch to see human competitiveness arise there. The rise of roads, navigation, communication, broadcasting and type raised multiple/simultaneous discovery by orders of magnitude.
Something that strongly suggests that more people were aware of and looking for the solutions to a given question and came to similar conclusions independently. Necessity has always been the mother of invention and humans tend to search for similar things simply due to similar necessities.

Stop trying to put wheels on a perfectly good tomato, it rolls just fine without them. Stop looking for fairies in a beautiful garden, its beautiful nonetheless, and finally, please, please stop misquoting and mispresenting legitimate theories to impress because they really don’t stand up to scrutiny.