The Aliveness in Self-Responsibility

I can recall clearly the distinct absence of tangible contentment and perpetual happiness in my life at one point. Apprehension and a sense of being rudderless within were rife in my early twenties. Faced with the classic ‘chicken-and-egg scenario: does discontent rid itself in some way, or does contentment rid discontentment.

There are two primary choices in life: to accept conditions as they exist, or accept the responsibility for changing them. — Dr Denis Waitley

Back then, matters such as ‘feeling under the weather’, so to speak, were resolved either by a visit to the doctor or a visit to the local priest – one remedied pharmacologically the other, dogmatic. Thus, words such as meditation, spirituality, ‘inner’ or ‘within’ were areas one investigated for one’s self.

And, even though there wasn’t anything major materially lacking in our household while growing up, emotions such as love, inner peace and happiness were seldom mentioned or even expressed physically among family members, thus that residual ‘something is missing’ presence.

Rooted in this ‘carrot and stick’ mind-set, of searching for an invisible something for which I didn’t have a name, bound me to repeat the same ignorance-based activities with the same inevitable results of worsening matters.

The search for this abstract ‘elixir’ had now become the dominant drive in my life. The unspoken mantra was: someone-something-someday will provide that missing jigsaw piece, that magic, then everything will be great again! As this Old Chinese proverb for maintaining happiness, puts it:

At first, on this inner quest, I remember being externally focused only, thus, through ignorance, was completely ignoring the within realm. Then, one day I said, ‘Time now for getting serious with this situation’. I posed this emphatic self-inquiry question repeatedly to myself, both silently and verbally:

‘What precise outer action must I take to change this inner situation to peace-happiness-contentment?’ 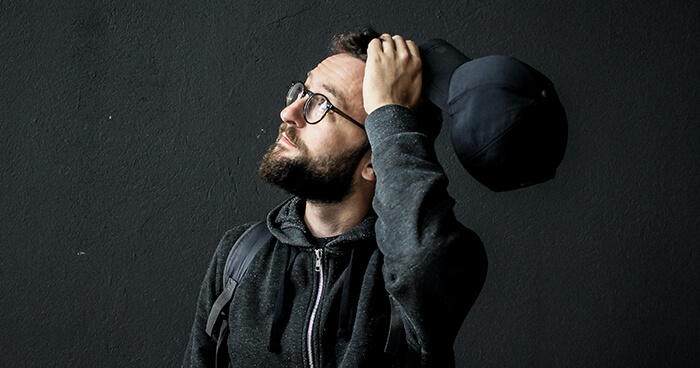 The question that set my quest in motion. Image: Valentin Salja

Asking this question with conviction daily had a profound effect. It triggered insights on the need of gaining an understanding of the subject matter. Things started to happen. Soon, understanding regards the inner mind processes began surfacing into consciousness. Suddenly, books on how these inner processes worked (an area previously ignored) began grabbing my attention. I found myself reading mind-body-spirit material for the very first time. At this stage, as spiritual perception started to crystalize, the once incomprehensible ‘inner ‘ and ‘within’ began making perfect sense.

The best way to predict the future is to create it. — Abraham Lincoln

For example, understanding such as, there is a perfect loving intelligence innately present within each one of us. That there is a level of mind known as sub-consciousness: a level of unwitting conditioning by parents, society, schooling, peers, religion and nation. A set of mental imprints that collectively make up our persona (false mask) personality through which we live our life.

These new insights triggered even deeper curiosity leading to even further revelations. Further Discoveries, that these automatically recurring thought-feeds to the conscious mind, should we remain in ignorance of, become even more dominant in terms of life orientation toward activity which does not honour our Nobler Self.

In other words, negative thought patterns remain active in deeper consciousness until we consciously interrupt the cycle, the loop-feed to the conscious mind. The sub-consciousness is not a separate mind but rather a submerged aspect of the full mind; the storage chip which contains every nuance of learned behaviour since birth. Housing all of our fears, phobias and addictions, this subconscious content exists in a perfectly mastered CD-like state and depends on mental tension, physical stress, fear and low self-esteem, for its survival. Activity without conscious consent.

In other words, mental stress, physical tension and residual fear are prerequisite dynamics for maintaining the involuntary influencing of the conscious mind without our conscious consent. Unwittingly, through non-awareness, we block our own inner bliss, smother the very source of the happiness we each innately crave. 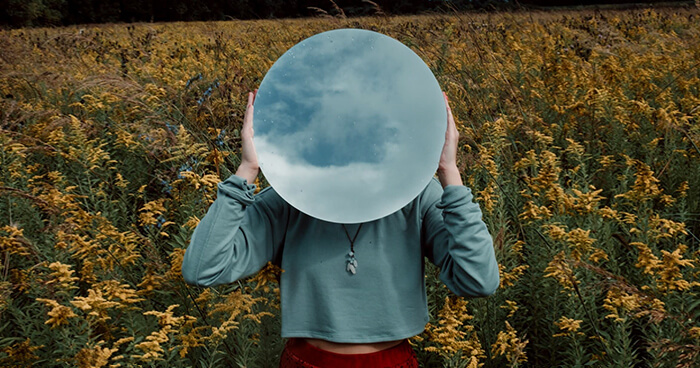 I had to take a deeper look at my thought-patterns. Image: Noah Buscher

What lies behind us and what lies before us are tiny matters compared to what lies within us. — Ralph Waldo Emerson

Studies suggest we use about one-fifth of our total mind with the remaining four-fifths lying as dormant potential. As my mind was undergoing the shift to spiritual awareness, intuition revealed that in the context of direct bliss experience and rebalancing the obvious deficit between being spiritually asleep and spiritually awake, that I commit fully, through some practical method, to the spiritual path.

Soon after these deep insights, a catalyst moment was about to change everything. I noticed an advert on a street billboard for meditation. This sign had been there for a number of years but I had never read it in any great detail, until that day. On reading it, every word described my situation just perfectly. And even though I knew nothing about meditation, apart from what I had read in books, this practice felt just right for me, thus I didn’t hesitate in ringing for an appointment.

After making that call from a local phone box, I walked home feeling really good and happy in myself. I had finally summoned up the courage to do something tangible toward finding that ‘missing something’.

Now, forty years later, I can say without a scintilla of doubt that practising meditation has truly changed my life completely, for the good. The practice has awoken deeper regions of un-tapped consciousness resulting in intangible levels of bliss, harmony and compassion. A level of awareness where happiness can be found in every situation that I’m consciously present to in mind, particularly in nature. A realization that consciousness is the innate status of each soul awaiting creative exploration and development.

The search for that missing something was finally over.

I practice meditation daily with the same youthful enthusiasm as when I first learned. In fact, as benefits are cumulative, from the spiritual well-being perspective, the practice, as it matures, is becoming even more noticeably rewarding and uplifting. 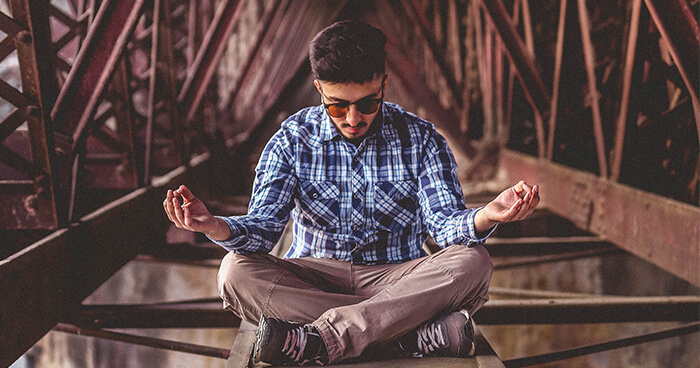 The practice that changed my world, for the better. Image: Syed Bukhari

Having competed in ten-kilometre road and cross-country runs during my teens, I decided on fulfilling a deep-seated desire of competing in my first forty-kilometre marathon, at age sixty. The distance seemed daunting at first, like, would I finish it? And what about hitting that ‘wall’ marathon runners speak about? I said to myself, “Hey, all I need to do is make it to the halfway marker, after that point, I was heading home with no other means of transport available due to road closures.”

After about three to four months of regular training, I found myself at the starting line of the Dublin city marathon in pouring winter rain. The first fifteen kilometres was like jogging in bliss. But, later in the run, matters of fitness were called into play, when every muscle of my body began protesting that I stop jogging … but quitting didn’t feel right either somehow.

Meditation to the Rescue

Meditation and simultaneously tuning into the universal life-force within while jogging came to my rescue. And, hey, in proportion to the strength of inner focus, life-energy flowed throughout my body thus helping to keep astride. That’s not to say the marathon was an easy stroll-in-the-park. Far from it: it was tough-going in places, particularly through the infamous ‘wall’ phase at about thirty kilometres. But, eventually, wrecked to the core, I staggered across the finish line in five hours and ten minutes amid cheers from excited spectators. WOW – what a feeling!

Having now completed three forty kilometre marathons (something I would not have dreamed possible during those earlier ‘searching’ days) I’ve discovered, similar to how improvised meditation helped through those grueling ‘wall’ phases, focussing fully in the now moment can be equally beneficial in our domestic chores. That, instead of ‘thinking about’ the activity, we remain fully focussed ‘on’ the activity. Thus, a tedious chore like washing the dishes can become an enjoyable means of deepening one’s spiritual awareness.

Connecting with the universal life-force is my greatest reward-gift, bar none. A journey initiated through inner chaos resulting in cosmos. As they say: if only I knew then what I know now! The sunshine was always there, it simply required instruction on clearing the clouds to experience its warmth within. To this end, reading that advertisement for meditation, for me, proved a catalyst moment to inner sunshine.

How are you all? What are you doing to keep your inner peace alive and your inner sunshine bright? Where are you making conscious choices around self-responsibility? What are some of the walls that you have to push through – how does it feel when you do? We are always interested in your generous sharings.

Thank you, Anuschka, good to hear from you. Yes, indeed hope springs eternal within each soul.Blessings, Raymond.

I have found my Tribe therefore hope
Thank you
Anuschka

0
Reply
PrevPreviousWho is My President?
NextReflections on The Social DilemmaNext