It’s Time to Own My Hidden Shadows

Find beauty not only in the thing itself but in the pattern of the shadows, the light and dark which that thing provides. – Junichiro Tanizaki

Animals have light and shade, just as people do. And contemplating my pet Chihuahua Podrick’s complex personality, got me thinking about my own. I know I’m not perfect, but perhaps I have a greater shadow side than I had previously thought. Perhaps, I’m the flip side to Podrick — I show the light to the world while keeping the shadows hidden away, close to home. A sneaky move. Perhaps unconscious — until now.

It is often said that pets have similar personality traits as their owners. According to this tongue-in-cheek theory, those with Golden Retrievers may be more happy-go-lucky, those with cats more sophisticated, self-sufficient or independent, and those with rabbits may be a bit on-edge yet curious.

Being the ‘parent’ of a Chihuahua, I’ve always felt slightly uneasy about this analogy, even if it is just for a bit of fun, for it is based on how the outside world views my dog. I don’t see myself as a particularly aggressive person, while my bite-sized pup, Podrick, will attempt to devour anyone who doesn’t meet his approval – this ranges from the postman to my previous love interests, to innocent babies. Young children wail in terror, and full-grown men jump high in the air in horror — it really does not look good for us.

Yet, as anyone who has been close to an animal will know, the personality that is shown to the world is only the surface level compared to what is conveyed to those in their ‘pack’. What most people don’t see is the way his gentle soul stares into mine as he rests his head in my lap and gazes into my eyes, how he brings me his, oh-so-stinky toy when I’m upset and how he gently and protectively lays on me when I’m unwell. To the world, his ‘shady side’ is on show, while the light clearly shines bright inside and privately. 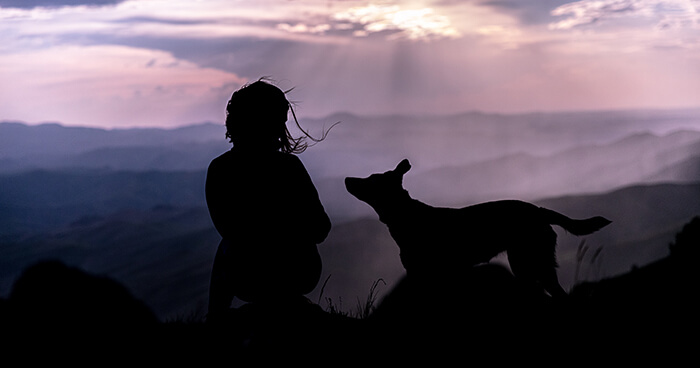 Sometimes we hide our shadows or our light, even from ourselves. Image: Patrick Hendry

Uncovering the Shady Corners Within …

I decided to get more guidance on how my shade reveals itself took a Dark and Light Triad Test – a psychology-based personality exam aimed at uncovering your natural tendencies on both sides of the scale. The web is filled with them, but the one I chose was created by the humanistic psychologist, Scott Barry Kaufman, Ph.D., who was named as one of the Top 50 Groundbreaking Scientists Who Are Changing the Way We See The World.

The elements of the Dark Triad part of the personality are:

On the other side of the scale is the Light Triad:

Faith in Humanity (believing in the fundamental goodness of humans)
Humanism (valuing the dignity and worth of each human being)
Kantianism (treating people as ends in themselves, not means to an end).

Before taking the test I was warned that the results may be confronting, that I will have all elements of the dark and light triads in me. I was told to be prepared. Still, I was taken aback at how much my results affected me and shook my perception of myself. 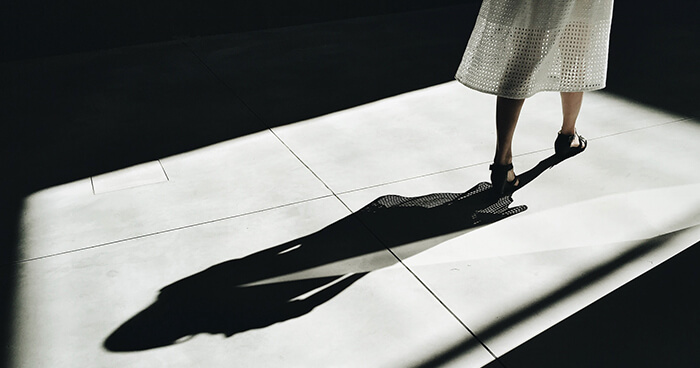 I felt ashamed of my shadows but when I sat with the discomfort, they transformed. Image: Martino Pietropoli

According to this test, light reigns over the shadow side of me, however, this less desirable side is greater than I had thought. Truth is, like most people, I never really think much about this element of myself. And as the world upgrades, I believe it’s time I did. The highest aspect in my light triad showed as Humanism, while on the dark side, Machiavellianism rules.

Sitting with the results, I felt ashamed, I felt imperfect. Defensiveness riled in me. Surely that couldn’t be right. That’s not me. I don’t have that much shade! I felt as though I had walked through a thick spiderweb, trying to pull off the sticky, unseen threads that covered my face like a mask, wondering where the spider was hiding, waiting for it to pounce, it’s venom ready and waiting.

Once I worked through these unpleasant emotions, something shifted in my everyday outlook. I no longer felt trapped by the web, instead, a sense of freedom took over as I moved through my everyday life with full knowledge of where the spider may lay. Just knowing and owning its presence gave me some hope and the power to make amends.

We’ve all got both light and dark inside us. What matters is the part we choose to act on. That’s who we really are. – J. K. Rowling

Since the online test, I have thought twice about making an excuse for why I was late to meet a friend. Instead of trying to save face, I owned up to my mistake and apologised. I realised I hadn’t called another friend, without a selfish reason to do so, for some time, so I picked up the phone to check in on him. These may seem like relatively small things, yet I know they can make a huge difference to people around me. Moreover, I am laying the foundation to tackle the greater shadows that I am inviting to surface. Owning my stuff and taking responsibility is a habit — one I want to devote time and awareness to. 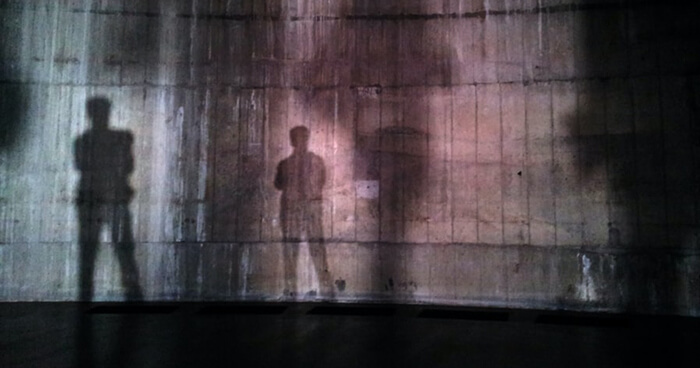 What matters is the part we choose to act on. Image: Marco Bianchetti

We are All a Little Bit ‘Bad’ and That’s OK

As Anne Frank is famous for writing: “In spite of everything, I still believe that people are really good at heart.”

Dr. Kaufman’s research backs this up, finding that while everyone has both light and shade, on average, most people tip more towards the light. He also found that those who rank higher on the dark triad often grew up in environments that were unpredictable and deficient in meeting basic needs such as; love, connection, shelter, nourishment and safety.

Those who have a propensity to act out and misbehave may be deemed to have more ‘bad’ in them. Perhaps they have just had harder struggles, larger obstacles to overcome, and are in need of more love and compassion. And perhaps they could be the brave ones too; owning their stuff and shedding their pain and fostering their light — they just need a little more guidance and support.

The eye is always caught by light, but shadows have more to say. – Gregory Maguire

Perhaps instead of branding people ‘good’ or ‘bad’, I will instead focus on treating everyone with kindness and understanding. I will pause a moment and consider how life might be for others, hear out their viewpoints, listen to their tales. For in essence, deep inside, we are all the same — we all have basic needs, we all have a light side, and we all have a shadow side too.

Recently as I walked Podrick past some young children (his arch nemeses), his body began to quiver with pent up emotion, a growl released from between his bared teeth but then something different happened: As I braced myself to take control of the situation, he turned and looked nonchalantly away, and we continued peacefully on our walk. Just as I am trying to be the very best version of myself, I realised, so is he.

Challenge: An invitation into the shadow

As Dr. Kaufman points out in his book Transcend, the latest research shows it is important for us all to not only cultivate positive emotions but acknowledge and accept without judgement those that are difficult or uncomfortable, and invites people to mindfully sit with the following questions:

What might come to mind when you think of your own shadow side?
What is something you struggle with or see as a potential scar?
How have you coped with negative emotions and scars?
What new ways might you be able to take these negative emotions/scars and do something productive with them?

We’d love to hear your thoughts and reactions in the comments below.

Much love and light to you and your shadow.

0
Reply
PrevPreviousThe Taoist View of the Universe
NextFaith and PatienceNext