BY Jonathan Davis
Welcome to UPLIFT
Stories of Love
Female Voices the World Needs to Hear
Who are Your Favourite Heroines of Today?

As a male growing up in modern western culture, I’ve been encouraged all my life to look to heroes for inspiration. What was implied from a young age, in the same vein as the idea that boys shouldn’t play with barbie dolls, is that all my heroes should be just that… heroes, not heroines. At some point a few years back, I realised that there was a category distinctly missing from my mind. I would hazard a guess that it’s a category missing from many male minds. Who are my favourite heroines of today?

I am a media-maker with a personal interest in helping people heal, grow and evolve so the following list may seem a bit skewed towards media-makers and change-makers. So, with that disclaimer, here’s my list of the most powerful voices that I personally feel everyone on Earth would do well to listen to; especially the fifty percent of us (the males) who have not even noticed that we aren’t listening to women enough.

Dear Friends, on the 9th of October 2012, the Taliban shot me on the left side of my forehead. They shot my friends too. They thought that the bullets would silence us. But they failed. And then, out of that silence came, thousands of voices.
The terrorists thought that they would change our aims and stop our ambitions but nothing changed in my life except this: weakness, fear and hopelessness died. Strength, power and courage was born. – Malala Yousafzai speaking to the UN.

When the title of Mrs. Universe was awarded to Ashley Callingbull earlier this year, she became the first Native American woman in history to win the crown. The pop-culture media was in for a shock when they discovered this beauty queen was ready to break all stereotypes from day one. She’s a newcomer to this list and I’m looking forward to hearing more of her voice in the future. 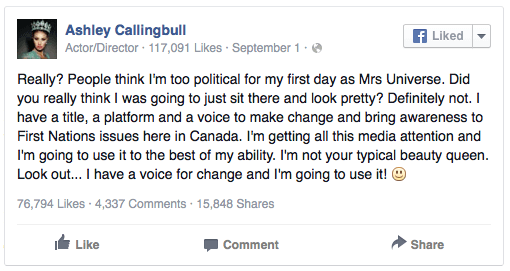 Lissa Rankin came to prominence with her 2013 book Mind Over Medicine. She’s a practicing doctor who became fascinated with the study of the placebo effect and the body’s ability to heal itself. A couple of great places to start if you want to know more are the following two TEDx talks: Is there scientific proof we can heal ourselves? and Is medicine making you sick?.

Brown, an author and research professor in social work is another person many people may have discovered through TED. I personally feel that her talks The Power Of Vulnerability and Listening To Shame are among the most deeply powerful TED talks of all time. You can find more about her perspective in her books The Gifts of Imperfection (2010) and Daring Greatly (2012).

Her book, No Logo taught a generation to critique consumer capitalism. The Shock Doctrine taught us to see how governments take advantage of disasters in order to execute their own agendas, and now the recently released This Changes Everything: Climate vs Capitalism is showing us that the climate crisis may be our best and only chance to make the drastic changes needed to reverse the concentration of power that seems to be ever-increasing in the world today. 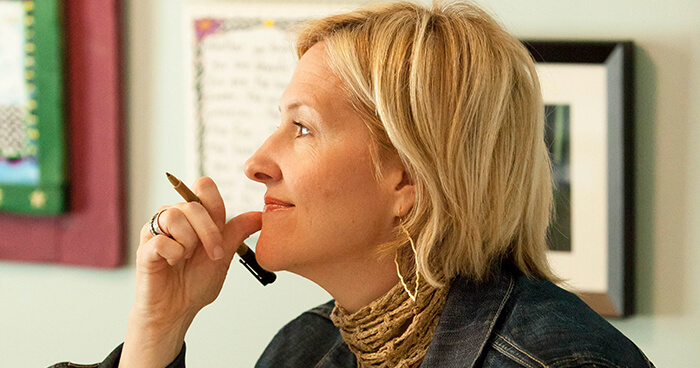 “You can’t get to courage without walking through vulnerability.” – Brené Brown. Image: Wikimedia Commons

Imagine being a typical student at university and then one day you begin to hear voices. Eleanor Longden has been through the depths of psychosis and has come out the other side. Longden is living proof that a person is capable of coming to a level of mastery over the challenges our culture considers to be mental instability. To this day Longden still hears voices, and at the same time has finished a degree in psychiatry herself and is completely stable, comfortable and happy with her life. Well, as happy as the rest of us… See her amazing TED talk here.

Lyon built a career as an investigative journalist. In later years she blew the whistle on her own network, CNN, when they refused to air her documentary about the Bahrain Revolution due to the network engaging in accepting money from regimes such as Bahrain in exchange for them being portrayed in a positive light. She has since had a change of life-direction after experiencing severe post-traumatic stress disorder from her time reporting in war zones. She finally found healing after working with the visionary Amazonian plant medicine, Ayahuasca and as a result founded Reset.Me. It’s a media-outlet specifically focused on journalism that shows the developments in what many are considering to be a scientific and cultural renaissance concerning the use of psychedelics as medicines.

Vandana Shiva is an Indian author who has published more than 20 books. Her focus is predominantly on the crossover between the expansion of corporate power, environmental destruction, and food security. For a great introduction to the mind of Vandana Shiva take a look at some of her more famous quotes here. 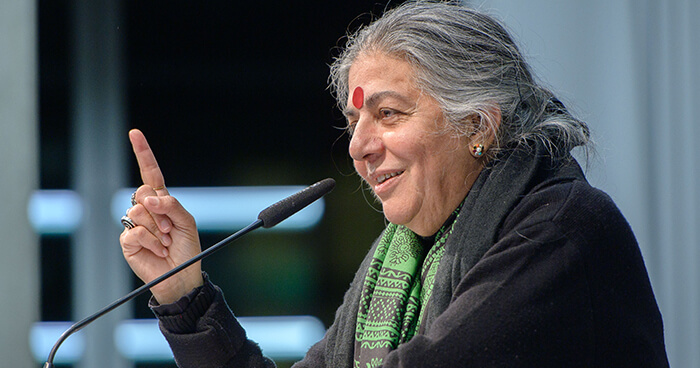 “We are either going to have a future where women lead the way to make peace with the Earth or we are not going to have a human future at all.” – Vandana Shiva. Image: Boellstiftung

Jill Bolte Taylor’s TEDtalk A Stroke Of Insight and her book of the same name both give an astounding account of a neuroscientist who experienced a stroke from the inside. While she never uses the word ‘spiritual’ or ‘mystical’, her story is a powerful first-hand depiction from the inside of what people have been describing for thousands of years: a mystical or spiritual experience. There is an added impact to hearing a neuroscientist tell it, and doing so in such a way that is not trying to convert anyone to some kind of new-found religion, as others have done in the past. Instead, she simply shares a perspective about accessing a sense of compassion and connection that is valuable for all of humanity. Between the TED video player and YouTube there have been over 20 million views, so it’s clear that I’m not the only one who was moved by it. Watch this life-changing video here.

Leonard is the founder of The Story Of Stuff Project, which creates amazingly simple animations to help people understand the complexities, problems, and solutions around consumer culture. You can take a look at the animated short that started it all, The Story Of Stuff, here. There are now more than a dozen in the series.

Roy is a Man Booker Prize-winning author of fiction and an environment and human rights activist. Her eloquence as a writer makes her choice of words when speaking as an activist both captivating and powerful.

Our strategy should be not only to confront empire, but to lay siege to it. To deprive it of oxygen. To shame it. To mock it. With our art, our music, our literature, our stubbornness, our joy, our brilliance, our sheer relentlessness – and our ability to tell our own stories. Stories that are different from the ones we’re being brainwashed to believe.
The corporate revolution will collapse if we refuse to buy what they are selling – their ideas, their version of history, their wars, their weapons, their notion of inevitability.
Remember this: We be many and they be few. They need us more than we need them.
Another world is not only possible, she is on her way. On a quiet day, I can hear her breathing. – Arundhati Roy 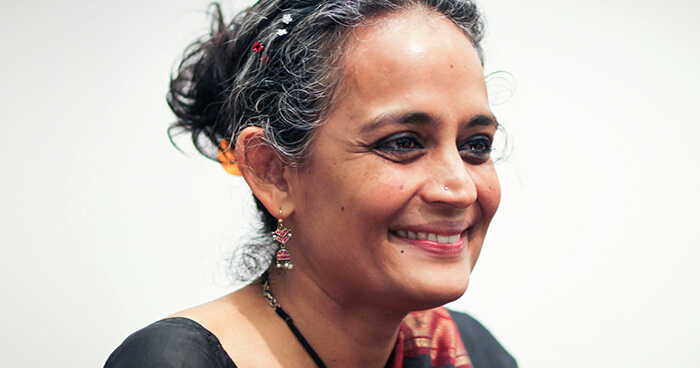 “Another world is not only possible, she is on her way. On a quiet day, I can hear her breathing.” – Arundhati Roy. Image: Jeanbaptisteparis

Wolf has emerged as a voice of reason in an increasingly insane world. She is an author and journalist who came to fame as the instigator of third-wave feminism with her book The Beauty Myth. She has since spoken out about violence in the Middle East and US foreign policy, as well as US domestic policy regarding the erosion of liberty. Her recent book The End Of America compares the historical warning signs of fascism with post 9/11 USA. Here’s a great summary of her ten warning signs of fascism, published in The Guardian.

Ever wonder what happened to Occupy? The Spanish Indignados were perhaps the most powerful example of the 2011 global protest movement, and out of it has emerged a political presence that has captured the heart and the city hall of Barcelona. Ada Colau Ballano, a member of the Indignados became the Mayor of Barcellona in June 2015, on a platform of anti-austerity. 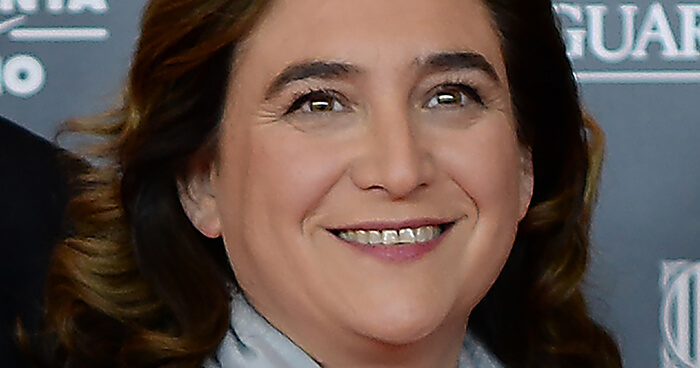 AMY GOODMAN: Ada Colau, one of the most tweeted photos in Spain these days shows riot police hauling you away. The image is from July 2013 when you were trying to occupy a Barcelona bank that was foreclosing on homes.
The caption added by Twitter users reads, “Welcome, new mayor.” Can you talk about that moment that you were being dragged away?
ADA COLAU: [translated] Well, there were many similar moments in past years, because when we have unjust laws, like the ones we have now in Spain, one has to massively disobey these unjust laws to defend human rights. Here, the right to housing is being infringed upon, and that’s why thousands of people, in a peaceful manner, we’ve had to practice civil disobedience to defend human rights. In this sense, this action was one of the many that have been performed in this country, and not by me, but by many other people who have been defending the human rights of all the others.
Throughout human history, it has happened this way. In order to defend rights and to win rights, many times it has been necessary to disobey unjust laws. Of course, now, as future mayor of Barcelona, I hope the police are going to be at the service of human rights, and not of the banks.

Christina Grof is the author of The Stormy Search For the Self, a guide designed to help people who have engaged in spiritual practices and found themselves in a state of spiritual emergency. She is also the driving force behind The Spiritual Emergence Network, an organisation helping people going through spiritual emergence through peer support from others with lived experience. She is the wife of Stanislav Grof and together they have dedicated a lifetime to understanding and caring for people who, very frequently, would otherwise be diagnosed with some kind of psychotic disorder and medicated for the rest of their lives.

As a Muslim woman, Manji is a powerful voice not only against Muslim extremism but also against the moderate Muslims she feels aren’t doing enough to stop the spread of extremism. Manji is incredibly articulate and brings a refreshing perspective in the form of a progressive interpretation of Islam. The following video clearly shows her fascinating and engaging perspective.

The trouble with Islam today.

Is there anyone I’ve missed? Who do you think are the female voices the world needs to hear?