Our life is frittered away by detail … Simplify! Simplify! – Henry David Thoreau, ‘Walden’

In my public presentations on future visioning, emotional healing, the ‘overview effect’, and living from the heart, I am often asked, “What sort of things can someone actually do to contribute to making it a more life-affirming world?”

I will sometimes reference the example set by Thoreau – something that my wife Linn and I have, in a small way, tried to follow by decluttering, by downsizing and by building and finally moving into a tiny house on wheels. But first, why Thoreau – who’s he?

Who is Henry David Thoreau?

In the spring of 1845 a brilliant twenty-seven-year-old schoolteacher and visionary writer, Henry David Thoreau, began a two year, two month experiment to live a simplified, more authentic life – “to live deliberately” as he put it, in a tiny one room, self-built cabin in the woods on the shores of Walden Pond, some distance north of Boston.

His foundational axiom of ‘simple living – high thinking,’ and the penetrating beauty of his writings – deeply soulful and down-to-earth practical – have for decades inspired and catalyzed numerous environmental revelations and life-style choices. Thankfully, they are continuing to influence the regenerative thinking of a rapidly growing fellowship of twenty-first century planetary-stewards.

At times it seems as if Thoreau is even strolling about with some of us right now; through woodlands and meadows, through crowded urban centers; running a succinct commentary from the clear streaming of his mind – past the extractive madness of greed – as he elucidates principles of self-sufficiency, and regenerative approaches to the life-support systems of our planetary biosphere. He’s delighted by the metaphor of ‘Spaceship Earth’ – and, he’s pleased by the continuance and embrace of his Walden experiment through the work of many awakening individuals in these late times.

Contrary to Thoreau’s admonishments, the unnecessary accumulation of things, of stuff, continues. Although there are beautiful shafts of life-affirming illumination breaking through everywhere, still, within these highly contrasting times of bleakest poverty and inconceivable riches, the accumulation of things amongst ‘the haves’ continues unabated.

History is rife with accounts of people getting stuff and holding on to stuff. Egyptian pharaohs, Viking kings, Chinese emperors, Celtic chieftains, and others of religious and political prominence not only got it (stuff), but also tried to ‘take it with them.’ Centuries later all their stuff was still here, crumbling, and covered in dust and dirt. Obviously, greed and hoarding are nothing new. 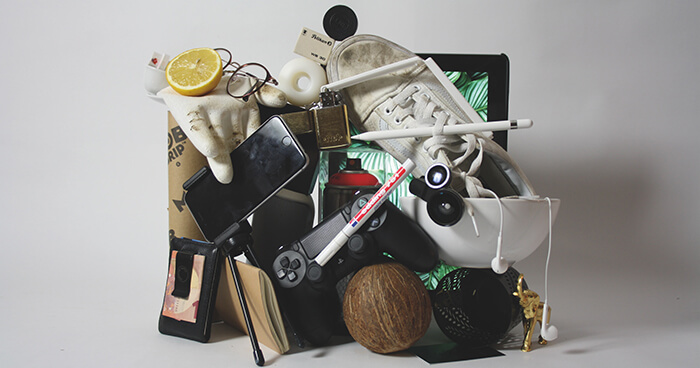 The simple truth is that the holes in the souls of hundreds of millions, even billions, of modern day humans can never be filled by material things. The incisive (Youtube) video, ‘The Story of Stuff’ with Annie Leonard tells it like it is. The angst-retardant of ‘Retail Therapy’ remains the ineffective, obscene and misleading fabrication that it always has been.

In far too many ways modern humans have been struggling within an onslaught of ceaseless waves of hypnotic programming (advertising) that surges through just about all the available bandwidths. Even now, when it should be most apparent, we are still told to accumulate things we don’t need, by spending money we don’t have.

Ethnobotanist and visionary Terence McKenna put it very slap-in-the-face-bluntly, “Reclaim your mind and get it out of the hands of cultural engineers who want to turn you into a half-baked moron consuming all this trash that’s being manufactured out of the bones of a dying world.” Whew! Cultural historian Thomas Berry said the same thing in a different key,

The difficulty of our times is our inability to awaken out of this cultural pathology. – Thomas Berry

Thus, one of the most important, pressing and persistent questions for our times is, ‘How might we live more sustainably, more consciously, simply, compassionately, and regeneratively?’

Within popular culture there are, thankfully, numerous emergent life-affirming signs and orientations that include, to the surprise of many, ‘letting-go of clutter.’ A burgeoning lifestyle equation seems to be: ‘less stuff = greater peace, satisfaction, and freedom.’

Keeping up with the Joneses is passé, while ‘decluttering’ is on trend. Life on a planet with limited resources demands that this attitude be more than just a passing trend. A growing array of popular books on simplifying our lives and getting rid of excess possessions is a good start. It seems like millions of ‘regular people’ are starting to wake up to Walden!

Just as inspired activists and visionaries speak about, ‘The Great Turning’ – so those in what has now become the budding tiny house movement are living themselves into ‘The Great Downsizing.’

Like many things that are unfolding in these unprecedented transitional times, tiny housing is not seen as the singular solution, but rather, it plays its part in the overall shift that is accelerating and gathering us up. These times are immensely uplifting if we know where and how to look. Despair not brothers and sisters!

Living in Process – Remembering the Love

My wife Linn and I believe we have moved in the right direction through the unconventional, liberating, challenging, creative, and, yes, fun process of building a tiny house on wheels.

The Story of Stuff with Annie Leonard

This venture went from a projected six-week completion time-window into a prolonged exercise in patience as we encountered the onset of a planetary health crisis. Some of the non-toxic materials we sought took months to arrive.

We are proud to say that our mutual decision to build a tiny house on wheels was made gradually and consciously. And, it’s important to note, we were not strangers to living together in small spaces. We had already lived together in two very small cottages for some three years. We like our compressed togetherness.

So we knew we had the ability to thrive living in very close proximity, and were confident that it had a lot to do with our clarity about the crucial importance of, ‘living in process.’ This was strengthened overall by our steady practice of, ‘remembering the love’.

Our relationship to ‘simple living and high thinking’ has not been merely conceptual, nor brand new. Linn had traveled for some ten years living out of a suitcase. When we met she described herself as a ‘climate refugee’.

As a young adult, also for about a decade, I had lived as a renounced monk and could have held in my arms all my personal possessions of less than fifteen items total. Unless you’ve lived with so few possessions by choice, it will be difficult to convey the freedom and clarity that seemed to emerge for me from this kind of radically uncluttered lifestyle.

Elements of Our Tiny House Process

Here’s an abbreviated seven-step sequence of our journeying:
1. Desire
2. Vision
3. Life-Alignment
4. Funding
5. Deciding
6. Committing
7. Design-Clarity (which occurred somewhat like a landscape appearing out of a thick morning fog.)

We did a lot of research to find a ‘tiny-experienced’ (local) builder. Linn also did months of extensive research that opened numerous and important doors into non-toxic living. We made a point to get clear on our values about not having stuff. We noted that in the hundreds of videos about tiny houses on the Internet, one of the most talked about aspects of tiny building considerations is ‘clever-storage’ for lots of stuff. Hmmm… ‘clever-storage’ hasn’t been high on our design criteria list.

It seems we went way more ‘Zen’ than many people who go tiny. Back to Thoreau: “Simplify! Simplify!” Ours is a symbolic expression as much as it is an imperfect practical demonstration. And, our liberating work of letting-go continues to this day.

We are very pleased to say that our completed eucalyptus-green tiny house on wheels of 7.4 x 2.4 meters is parked on a twelve-acre organic farm on the Sunshine Coast of Queensland, Australia. Like the mythical realm of Shambhala, Linn and I are graced by the wonderful people residing there, and by animals, ducks, other birds and bats, reptiles, insects, trees and plants — the Earth, Sun, Moon and Stars!

We are in. We are downsized. We are simplified. We are grateful. And … We are loving it!

What has this article brought up for you? Are you a mini or maxi-taxi? As we go into the New Year we invite you to rummage through all your stuff and make a big pile for the charity shops. Charity shops are in great need during this time and afterall someone’s junk is someone’s treasure. Let it go …
Please let us know your thoughts in the comments below.

Much love and happy freeing and freedom to you all.