It is fair to say that being well mannered and polite is expected. Manners are taught across all cultures all over the world. Ancient traditions and rituals fashion the outward appearance of the gestures offering nuance and cultural diversity: lowering the eyes, tipping the hat, bowing or genuflection, hands in a prayer mudra, nodding of the head or as in china a two-taps on the table to say thank you to the waiter. There are so many different customary ways that all illustrate the same sentiments: ‘I see you, I acknowledge you, I respect you, I thank you.’ On this, we are all agreed.

When we see a lack of manners we are generally taken by surprise. They are so far from the norm that we single them out and recount the behaviours as rude. What we are truly saying is that this anomaly surprised us, offended us, shocked us and sometimes even hurt us. We take a collective sigh of disappointment for the whole of humanity. It also is an accurate reflection that our moral compass is in good working order and so too is the bigger moral compass of the society that we are navigating within.

Recently I met a new friend from China. With a PhD doctorate. A man of relatively few words. He smiles a lot and he says, ‘thank you’ an inordinate amount of times. Of course, I noticed it. I even passively judged it as an excessive and unnecessary cultural difference. Yet, soon I began to understand this was not a distinct cultural learned behaviour, but rather particular to him. He was excessively kind. He said ‘thank you’ on almost every occasion. He even thanked me for thanking him. It had a mesmerising effect on me. It softened me. It made me more receptive. More alert to my gestures and behaviours—my manners. It gave greater meaning and impact on shared activities. It slowed me down. I paused more. Watched more. I was simply more present.

I am a strong believer in expressing gratitude. I practice this as much as I possibly can. But this was a whole new level. It was an entirely new reverent way of interacting. It was breathing life more and more often into the sentiments: ‘I see you, I acknowledge you, I respect you, I thank you.’ I noticed at first how it felt a little uncomfortable, even contrived. And yet the effect on my heart and even happiness was evident. I too was smiling more, laughing more and generally feeling more engaged and enchanted by the world. 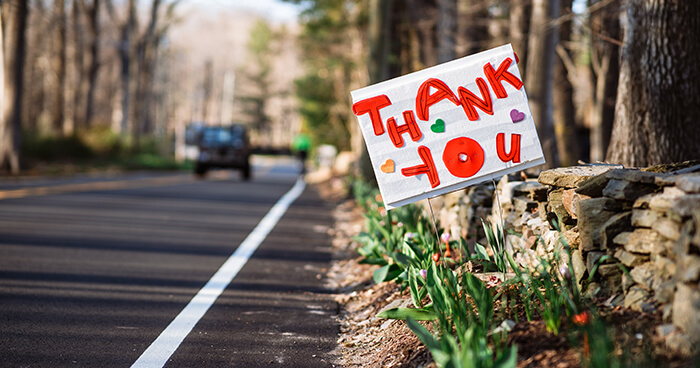 ‘I see you, I acknowledge you, I respect you, I thank you.’ Image: Nicholas Bartos

The main challenge for me was when I gave a compliment, it could be deep or banal: ‘The soup you made was delicious or I appreciate your kindness and willingness to help others.’ No matter what the compliment, he simply said, ‘Thank you.’ He has never refuted or rebuffed my praise. He has never made an excuse or offered self-deprecating commentary. He has never looked or felt embarrassed. He simply says, ‘Thank you.’ And we move on.

Somewhere in my British cultural conditioning I am always giving or expecting an epilogue at the end of a compliment. I guess it’s a habituated false modesty. It surprised me how hooked I was on waiting for my new friend to protest a compliment and how unstoppable my knee-jerk reaction at contesting his. As he always took the compliment, I simply had to follow suit. I just started to breathe in, pause and from my heart, say, ‘Thank you.’ And we moved on.

He in turn is mesmerised by my constant commentary and appreciation of the world around me; particularly that of nature. He is accustomed to living in his mind and his intellect. I am accustomed to living in a world where miracles and images grapple with the alphabet to try and put the wonders and mysteries of this universe into an expressible form. To try and capture a moment of the complexities and like a snowflake, place it delicately, on a warm tongue – knowing it has already started its disappearance.

His kindness and gratitude blow my mind. My seeking deep into this mystery called life blows his mind. Together our new friendship is shaping our separate well-mannered sensibilities. There’s a convergence: gratitude for each other, an appreciation for our differences and for what’s to be spontaneously discovered in the honest sharing of who we truly are/were.

What did you notice?

the bat, on the wind, in the dark;

big-chested geese, in the V of sleekest performance;

the soft toad, patient in the hot sand;

the uproar of mice in the empty house;

the tin music of the cricket’s body;

the blouse of the goldenrod.

What did you hear?

The thrush greeting the morning;

the little bluebirds in their hot box;

the salty talk of the wren,

then the deep cup of the hour of silence.

When did you admire?

The oaks, letting down their dark and hairy fruit;

the carrot, rising in its elongated waist;

the onion, sheet after sheet, curved inward to the pale green wand;

at the end of summer the brassy dust, the almost liquid beauty of the flowers;

then the ferns, scrawned black by the frost.

The swallows making their dip and turn over the water.

My dog: her energy and exuberance, her willingness,

her language beyond all nimbleness of tongue,

her recklessness, her loyalty, her sweetness,

her strong legs, her curled black lip, her snap.

What was most tender?

the everlasting in its bonnets of wool;

the kinks and turns of the tupelo’s body;

the tall, blank banks of sand;

the clam, clamped down.

What was most wonderful?

The sea, and its wide shoulders;

the sea and its triangles;

the sea lying back on its long athlete’s spine.

What did you think was happening?

The green beast of the hummingbird;

the eye of the pond;

the wet face of the lily;

the bright, puckered knee of the broken oak;

the red tulip of the fox’s mouth;

the up-swing, the down-pour, the frayed sleeve of the first snow—

so the gods shake us from our sleep.

Thank you. Thank you for saying ‘thank you’ more and bearing witness to how it changes you. What do you notice? What moves you? What is freshened or new? We are always thankful when you share your heart with us in the comments below.

0
Reply
PrevPreviousDespite the Anxiety, I Pitched My Tent
NextA House is Not a Home Until Safety and Love Move inNext