Dr. Bruce Lipton: We are Moving into a New Phase of Civilization

If you have watched the news lately, browsed the web, or even looked out the window, you may have noticed that something is going on. In the face of economic upheaval, religious violence, racial bloodshed, climate change and now, a viral pandemic, civilization is in a state of upheaval. The globe is enveloped in chaos.

Chaos? That sounds pretty scary! The reason is that most people confuse the word chaos with the word random. Random simply means the outcome or result of a process occurs simply by “chance.” In contrast, the opposite of random is the word determined, which means the outcome of a process can be predicted by understanding a sequence of cause and effect events.

BUT WAIT! Fact: Chaos is not random!

Chaos is actually a special case of determinism. While the outcome of a chaotic process is indeed determined, the number of inputs contributing to the process is so great, that it is mathematically impossible to calculate all of the data to predict what will inevitably result. Remember the story of the butterfly effect; in which a butterfly that flaps its wings in South America influences a storm in North America?

The weather is an example of chaos. You could make a totally accurate prediction of what the weather will be at twelve-noon on Monday in Paris … but one would first have to calculate the flapping wings of every butterfly and every other insect around the world, as well as measure every breeze on the planet, and a myriad of other contributing factors. Theoretically, the collective data would be able to make an accurate prediction of weather at every spot on the globe. The problem is that it is impossible to record all of the data necessary for that accuracy. So, weather prediction, using only a small data set, would not provide an accurate prediction but would represent more of a ‘probable’ prediction.

In regard to the current global chaos, the influence of human behavior has undermined the web of life and precipitated the planet’s Sixth Mass Extinction event. Is the current chaos expressing civilization’s end or is it signaling a new beginning for civilization?

Stepping into A New Phase of Civilization

Surprise! Nature is an expression of fractal geometry, the science that emphasizes the principle of “As above, so below.” Getting to the point, the evolution of human civilization is an expression of a fractal, self-similar, image of vertebrate evolution; the pattern of evolution that went from fish to amphibians, to reptiles, birds, and finally, mammals. Human civilization has completed the first four stages and is on the threshold of manifesting the fifth level, the ‘mammalian’ version of our evolution. The earliest version of civilization represented the ‘fish’ phase, a time when the lives of the early people were tied to the proximity of water, living off the fruits of the sea and traveling the planet from coast to coast. 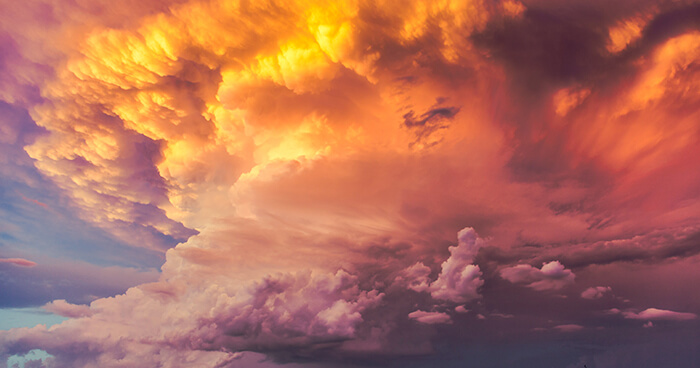 The weather is a perfect example of chaos. Image: NOAA

Once humans developed the ability to dig wells and use viaducts to control the availability of water, they were able to move on to the land and generate agriculture. This was the equivalent of the ‘amphibian’ phase of human evolution, starting at the water and moving onto land. The introduction of technology pushed humanity to the next higher level of civilization’s evolution, its ‘reptilian’ phase. Reptiles, from lizards to dinosaurs, move and behave as powerful, Earth-bound digital ‘machines.’ When humans entered the industrial age, civilization advanced beyond agriculture and created a mechanized civilization. Interestingly, the ‘blood’ of the dinosaurs, oil, is the fuel that powers our ‘reptilian’ civilization.

In 1902, the industrial revolution enabled the Wright brothers to manifest human flight in North Carolina, an event that birthed the ‘bird’ phase of civilization. Civilization’s ‘bird’ phase culminated when humans landed on the Moon in 1969. The event was marked by the astronauts’ picture of the distant blue-green planet Earth on the Moon’s horizon.

This one photograph changed human civilization and launched the Earth Day movement, a time of Hippies and a time when people began to consciously recognize that we must take care of the children, the oceans, the lands and the air … a focus on nurturing Nature. It is not a coincidence that the character of mammals is that they are, by definition, ‘nurturers.’ The moon landing, the fullest evolution of the ‘bird’ phase, precipitated the evolution of the ‘mammalian’ phase of civilization.

Opportunity for a New Beginning

The current global chaos is a symptom of the pending mass extinction event. It is an expression of an inherent fractal pattern, in which Nature is informing us that our destructive ‘reptilian’ phase of exploiting Nature must come to an end. It is necessary that the ‘reptilian’ dinosaurs, the corporations that control government, stop desecrating Mother Nature for profits. It is time for us to collectively evolve to a higher level of consciousness and adopt the indigenous people’s insight as being ‘gardeners’ that nurture the planet. Nature is now calling us to adopt our ‘mammalian’ character as nurturers.

So where are we at the current moment? The most important point we must recognize is that the current chaos is not a ‘random’ character; it is an expression of an unfolding predetermined pattern. We are observing the collapse of the current destructive ‘reptilian’ civilization while simultaneously seeing the rise of the new, nurturing ‘mammalian’ culture.

The important conclusion of this communication is that the planetary upheaval we are now experiencing is not an ending, but a new beginning, offering an opportunity to birth a new, healthy, sustainable civilization. Employing an understanding of Nature’s inherent fractal pattern will enable human beings to create a social structure that will nurture the planet and its web of life, an evolutionary uprising that will ensure all of life has a chance to thrive into the future.

The conclusion is simple: Don’t focus on the structures that are collapsing. It is time to direct our intentions and our efforts in supporting the rise of a holistic, healthy and harmonious new civilization!

With Love and Light,

I call it organized chaos per Blue Star, the Pleiadian. This theory is complimentary to Blue Star. Definitely OC (organized chaos) is the NOW theme on planet earth. Unfortunately so many are being ‘forced’ to recognize the truth of our living planet instead of exploiting her, we need to join together in co-creation. Bruce is on the right path and with so much wisdom, thank you!

My good friend Ellen led me to the term/phrase ‘Choarder’ … meaning out of chaos comes order. It has helped me understand and come to terms with current events. Thanx for all you do

Powerful words. I agree with Bruce Lipton … change is in the air although as it’s planetary, it’s going to take a while! The hippies in the 60s were right “ the times they are a-changing…”

Loved this read. Yes time for love and nurture.
Anna

You are a gift to humanity and our mother earth with all the things you’ve come across and that you are sharing with us!!

So true – your conclusion – and that’s what I do, have been doing in the last years, seems like a preparing time for this extraordinary time NOW.

With love and light,
Natali

thank you for this blog

Nature nurtures, we must start nurturing nature. Gratitude for all your work Dr Lipton. Namaste.

A stunningly insightful expression of our current standing on the path of evolution! And, yes, dr. Bruce-
It’s definitely time…

does the mammamaian phase mean the end of a patrarchal system ????

Thanks you is ongoing. May of my

Thanks for the wonderful article. Thanks for sharing

Thank you for this direct insightful article. More please

Dear Bruce, thank you for this. It occurred to me while reading that we could also say that our reptilian brain fight/flight/freeze/etc response to chaos is making it more difficult for us to move into this new “mammalian” phase? That we need to learn to use brain structures that are more appropriate for the complexity of the chaos we find ourselves in?

Uplifting and inspiring, so much so it’s brought tears to my eyes and a deep yearning for what the future holds.

Thank you so much, Dr. Bruce!

Succinctly written and inspiring. This article resonated deeply with me and voiced my innermost feelings. New personal and collective power and dynamism will only flower as a result of harmonising with Gaia rather than exploiting her for short term desire fulfilment and the archaic idea that having more “stuff” makes you happier.
We can smell the rose, kiss it, give heartfelt thanks in the moment, then walk on. Rather than pluck it and stick it in a ziplock bag in a vain attempt to capture the heady aroma for some future when the child-ego wants that experience again.
And so, we are growing up. At last!
Cheers Bruce.