It has been said that dancing is integral to the experience of being human. Like speech, it’s a way of expressing and communicating with others. The benefits of dancing are endless. Not only does it make you smarter, happier and healthier; dancing in synchrony with others raises our pain tolerance and makes us feel more connected. Dancing together is something universal that we humans have done since the earliest times. It is fundamentally cooperative in nature. Just as dance is innate to every human being, social dance is universal to every society.[1] Making music, and movement to music, is central to ritual, courtship, identity, and human expression cross-culturally.

While I dance I cannot judge, I cannot hate, I cannot separate myself from life. I can only be joyful and whole. This is why I dance. – Hans Bos

There is something quite magical about dancing with others in synchronised movement. Whether it’s purely for enjoyment, for fitness, or as part of a ceremony, dancing with a group will most likely leave you with an ear-to-ear grin or feeling deeply stirred and part of something sacred. It blurs the lines between the perception of “self” and “other” and leads to a bond between participants. Anthropologists have long recognised the community-building effects of dancing:

As the dancer loses himself in the dance, as he becomes absorbed in the unified community, he reaches a state of elation in which he feels himself filled with an energy of force immensely beyond his ordinary state . . . finding himself in complete and ecstatic harmony with all the fellow-members of his community, experiences a great increase in his feelings of amity and attachment towards them. (Radcliffe-Brown 1933/1948)

Studies have found that even smaller moves like tapping or nodding your head to the same beat as someone else still has its benefits. Walking around in step, and singing in synchrony with others creates stronger feelings of trust and connectedness, as well as an increased willingness to cooperate. 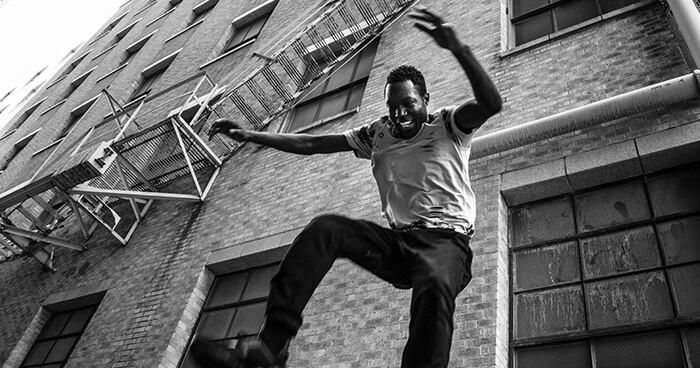 Brownwyn Tarr, a dancer and experimental psychologist at Oxford University, investigated the effects of synchronised dancing. In this study, 264 high school students from local schools on Marajo Island, Brazil, were recruited to participate in learning one of four movement conditions. The movements were high and low exertion, and synchronous or partially synchronous.

Those who were doing the same dance moves in time with the rest of the group felt more connected to one another afterwards. Exertion, which raised their level of endorphins, produced higher pain thresholds. As it’s hard to measure endorphin levels directly, they used pain thresholds as an indirect measure, by attaching and inflating a blood pressure cuff on their arm, and determining how much pressure they could stand. Those who sat down to dance and were out of sync with their group felt their pain threshold lessen. Tarr states, “The key point is that if you exert yourself or synchronise your movements, you can arrive at an elevated pain threshold. If you do both, the effect is additive.” Tarr also said that perhaps this is why we love to flashmob.

[…] We’re getting this elevated pain threshold, from the feel good chemicals pumping through our systems, but also we feel more connected to others because we’re doing the same thing at the same time and that signals the sense of connective oneness we like to get. 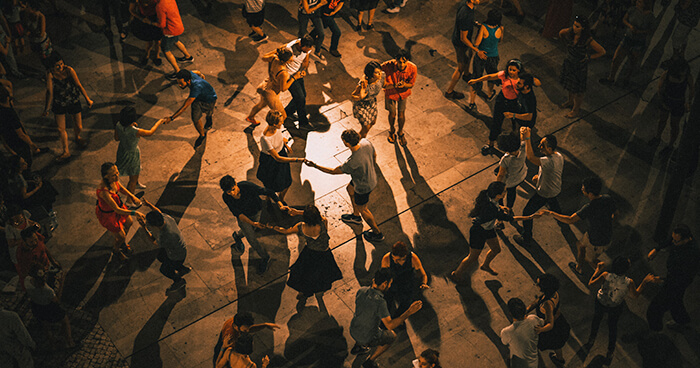 Another study looked at how people grew closer through singing. It was found that making music together also elevated pain tolerance and social bonding. People from a community choir met in both a small group and a large group or ‘mega choir’. Results showed that feelings of inclusion, connectivity, positive affect, and measures of endorphin release all increased across singing rehearsals.

The finding that singing together fosters social closeness – even in large contexts where individuals are not known to each other – is consistent with evolutionary accounts that emphasize the role of music in social bonding, particularly in the context of creating larger cohesive groups than other primates are able to manage.

To anyone who dances, sings or makes music with others, these findings will hardly come as a surprise. The idea that synchronous movement and music increases group cohesion has old roots. Becoming “absorbed in the unified community” through music and dance can happen in many settings; at carnivals, parties, ceremonies or celebrations. Historians suggest that armies, churches and communities may all have benefited either intentionally or unintentionally from cultural practices that draw on physical synchrony to strengthen bonds between members. Judith Lynne Hanna said:

To understand humans, Charles Darwin recognised it is first necessary to understand how they gather and transmit knowledge in ways similar to and different from their animal forebears. The more we know about dance — its presence, absence and its resurgence in individual and group life — the more we will know about ourselves: To Dance is Human.

And if dancing and singing build trust and unity, we probably should all do more of it.

Watch the video We Came to Dance.

What’s your favourite way of body movement and expression — Tango, Freestyle, Hip-Hop, Classical, Modern Jazz? Do you like dancing alone in a crowded room or vibing off a partner? Have you ever tried group routines and dance choreography? Maybe you just let it all twist and shout at a Zumba class? Maybe you are shy and just dance at home when no one is watching?  However you get your groove on, we’d love to hear about it in the comments below.

Much cheek-to-cheek affection in motion …

Thank you for this article. Yes dance build community. I’ve been dancing now for over 25 years And teaching for more than 15 years. Owned a Latin dance school several years until I had to stop dancing due to major back problems. For years, I’ve research other types of dance and movement practice that I could do without hurting my back. I found my practice through conscious dance and self expression. I love this way of dancing, it allows me to dance my own unique way without complicated choreography which I can fully express myself, be free and authentic.
I have been offering Groove classes online through zoom and it’s been a great way to connect with people, interact and dance together.
If you are interested to dance freely With some guidance and to belong to a wonderful community Of liked minded people, I invite you to try it out. Here is the link below. Just email me for the password or click here for more info: https://bit.ly/2WMRrhc

I hope to have the opportunity to see you on our virtual dancefloor.

Yes! If anyone is needing more dance please join us – look for Dancing Resilience group on facebook – we dance 5x a day for about 20 minutes each time. Every playlist ends with Resilient by Rising Appalachia, and all the other songs are a mix from instrumental to hip hop to West African to disco to funk to 60s to pop to Latin (lots of Brazilian and Colombian and Cuban influence) and medicinal music of many mother tongues. Thank you for this loving message.

Love it…have been dancing from birth and went on to train professionally in all genres.Tap dance being my fav.I continue to dance at almost 60yrs, salsa and belly dance being the latest

Your artcle has explained clearly everything people need to understand about dance and its ability to heal and improve health to name but a few of its benefits.Thankyou.

Yes so wonderfully true ! Thanks Tanja.
Many years of ecstatic dance taught me just that.
Dance: nirvana here on earth.
Namaste, love to all
Ton

I love dancing! Went to a ballet boarding school in England as a kid, danced professionally for a year in Canada and am now partially paralyzed from a car accident so I boogie with one half of me. Let’s dance together online! Get our groove on!

Where it all began
And returns!!
From the last Psalm for such times as these at last!
Ignored,rejected,overlooked,underestimated,neglected,
THE LOVE SPIRIT WHO created all & gave us HIS LOVE-LETTER-MANUAL,through ever possible thing,still was first to encourage us to celebrate with THE LORDGOD-with DANCING,another perfect gift!! All thankfulness,and Glory to The One Who gave dance,HalleluYah!Foreign to most,because of blockages,but TRUE nevertheless!

Thank you for this article. Sacred Circle Dance is a form of dance that is built on the ancient way of dancing in a circle, synchronizing the steps, so sounds just in tune with what you are writing.
In cultures such as Greece and the Balkans it is still alive today. However, it has also been brought to a much wider public: In the 60s German dance master Bernhard Wosien collected many of these dances and also choreographed many beautiful ones himself and then introduced them from the Spiritual Community Findhorn Foundation in Scotland in the 70-s. From there this dance form has spread far and wide over the world and many many teachers have passed it on and added to the treasure of dances, to everything from classical to modern music. Sometimes it’s called simply circle dance. Check it out and enjoy!

The same effects (healing, connecting, uplifting) that Tanja describes on the Social/Communal level… can also be experienced on an individual level.
Chakradance, for example, is a more inner-directed dance journey, using spontaneous movement to music created to resonate with each in turn of our major chakras, or energy centers.
It can be experienced privately, at home, or publicly, in a group class led by one of our global tribe of facilitators.
Interestingly, even though we emphasise the personal over the collective… and encourage people to dance with eyes softly closed… and celebrate the ideas of non-performance and non-judgment (literally “dance like nobody’s watching, because nobody is!)… we nevertheless find that the experience is amplified in a group class setting.
Great article, Tanja, thank you. Namaste, Paul x