What Happens When We Teach Peace?

BY David Cook
Welcome to UPLIFT
Stories of Love
What Happens When We Teach Peace?
The Ripple Effect of Inner Peace

Earlier this year, I walked into the university classroom where I teach a course in Peace Studies. Seated in a circle around the room were seniors just shy of graduating. They would soon become doctors, social workers, teachers, community organizers, executives, and leaders.

To open our semester together, I wrote a simple, three-word question on the board.

Silence. Stumped by this tiny question, no one spoke. They did not have an answer, and I would later discover why: It was the first time in their life a teacher had asked them to define peace.

Each year in the United States, millions of students graduate from high school and college, their diplomas certifying years spent studying the principles of science, mathematics, literature, and writing. These are the subjects we value as a society, and therefore we insist that our young people develop knowledge in these areas. Imagine if we graduated seniors who couldn’t read, or do simple math, or write basic paragraphs. Outrageous, right?

Yet these very same students will graduate without ever once studying conflict resolution. During their entire academic career, they will never be required to take a course on making peace, building community, or forgiving an enemy. The principles of violence and nonviolence will not be analyzed, the philosophy of Dr. King will not be discussed, and satyagraha—the practice of nonviolent resistance, which Gandhi called the most powerful force in the universe—will remain ignored.

We are neglecting to teach our students the most fundamental and urgent lesson: how to make peace in the world around them. And by forgetting to do so, we are promoting violence. As my friend and fellow peace educator Colman McCarthy once said,

If we don’t teach our children peace, someone else will teach them violence.

So each day, in the classrooms where I teach middle school, high school, and college students, I work to counter the violence, spark the conscience, and liberate the thinking mind. I teach peace. 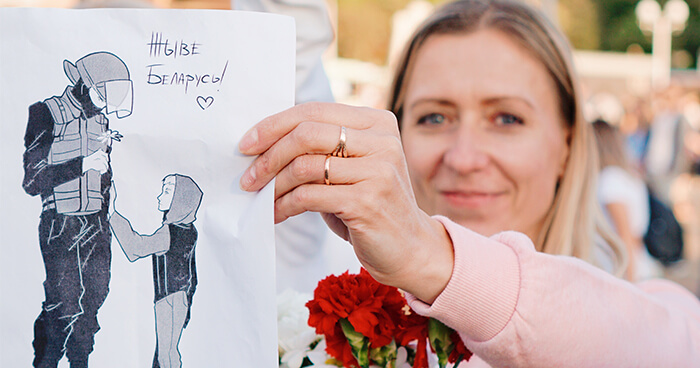 At the most basic level, to teach peace is to teach that violence does not have to happen.

For too long in the West, we have acted as if violence is inevitable, a natural part of the human condition that sticks to us like the skin on our back. Nonviolence is written off as an afterthought—viewed, at best, as do-nothing-passivity and, at worst, as a long-haired fantasy of Woodstock. Responding to violence with violence is seen as the only practical solution, and the result is greater violence.

But this is changing.

Hundreds of colleges and universities across the globe now offer degrees in Peace Studies, with some universities reporting enrollment size doubling in the past few years. At the heart of each program is the declaration that nonviolence, peace, and justice are not utopian dreams but real and practical ways in which humans can live and affect the world around them. Violence and its dynamics are examined alongside the history, philosophy, and principles of nonviolence. The treasure chest of stories is opened, and like some reverse-Pandora’s Box, the ideals of peace-making are unleashed onto classrooms as students study the examples of Cesar Chavez and Vandana Shiva, Dorothy Day and Daniel Berrigan, Gandhi and Gene Sharp.

From a broader perspective, this academic trend towards peace-making is part of the widespread awakening—what David Korten calls “The Great Turning”—happening in response to the problems of our time.

Those problems are many.

The United States leads the First World in the following categories: prison population, drug use, child hunger, poverty, illiteracy, teen pregnancies, firearms death, obesity, diabetes, recorded rapes, use of antidepressants, income disparity, military spending, production of hazardous waste, and the poor quality of its schools (Paul Hawken, who published this list in Blessed Unrest, also points out that the U.S. is the only country in the world besides Iraq with metal detectors in its schools).

For the peace educator, this list is no surprise. Violence spreads like a virus. Contagious by nature, it follows a spiritual law that says that violence plus violence only equals more violence. Violence can never lead to peace, and the more we respond with violence, the more violence we create. 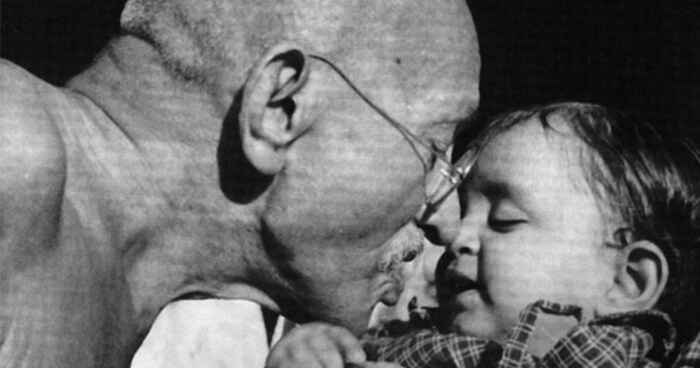 Gandhi was, and still is, a beacon of peace. Image: Public Domain

To Teach Peace is to Teach Gandhi

“Could nonviolence have stopped Hitler and the Nazis?” I ask middle school students in my U.S. history course. Having already examined the philosophy of Gandhi and Martin Luther King Jr., the students create imaginary European nations whose mission is to develop nonviolent strategies to stop invading Nazis. After they present their plans, I tell them about the citizens of Denmark—so many of them teenagers barely older than my students—who monkey-wrenched the entire Nazi plan through nonviolent noncooperation.

During our year together, these 12-year olds have surveyed the landscape of U.S. history. But where most history courses ignore the deep tradition of American nonviolence, my curriculum examines Jeremiah Evarts as well as Andrew Jackson, AJ Muste as well as Harry Truman, Henry David Thoreau as well as Teddy Roosevelt. My course features nonviolence alongside every story of violence. Students develop a long exposure to the people in our history who have resisted violence by following their conscience.

“Which is stronger: love or hate?” I ask high school students in my Democracy Studies course. We’ve already finished the biography of Gandhi, discussing at length the ideas behind satyagraha. Gandhi is the Thomas Edison of nonviolence—he switched on our understanding of this universal force more than anyone prior, and to study and teach peace is to study and teach Gandhi.

Gandhi was skilled at civil disobedience, but he was even better at promoting practical solutions. Gandhi resisted injustice by creating alternatives, what he called “constructive programmes.” His favorite was the spinning wheel, which allowed Indians to forgo British cloth while actively spinning their own.

With a nod to Gandhi’s idea, I ask my students to create their own constructive programmes. Find a problem in the world around you, I tell them, and then create its solution. Further freeing them from traditional academia, I liberate the grade book and allow them to assign themselves a grade. They dive in and create some powerful actions. 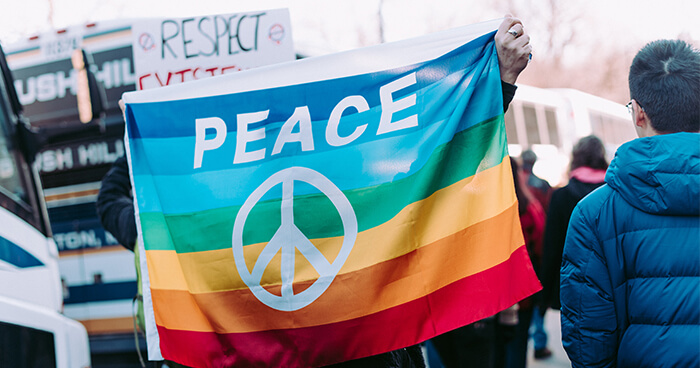 There are so many ways we can be advocates of peace. Image: Alice Donovan Rouse

Schools do not have to create a formal Peace Studies course. Just like writing or note-taking, it is an academic skill that can be infused into almost any current course.

But when schools do formalize a Peace Studies program, the door opens wider. At the university where I teach Peace Studies, students read a biography of Gandhi and then Michael Nagler’s formative The Search for a Nonviolent Future. We spend many days wrestling over the practice of forgiveness before measuring the effect inner peace has on external circumstances. Understanding the practice of war-making consumes several weeks, as we examine the media’s role in promoting war, the reasons why war gives us meaning (in the words of Chris Hedges), and also a presentation from local U.S. Army colonels.

Peace Studies does not shirk away from opposing viewpoints. It does not practice partisanship. The study of peace is radical in that all are welcome, for peace is about more than politics. I can teach for months without ever speaking about George Bush and Barack Obama or red and blue states. Peace Studies gets underneath the surface, going deeper into what it means to be human.

And that’s why so many students cram into my classroom to take these courses. Not because of me, but because they are so hungry to study peace.

“I Understand What Making Peace Is All About”

A few years ago, a student of mine who delved as deeply into understanding peace as anyone I’ve ever taught was participating in a march for reproductive rights in Washington. Thousands were there, including the counter-protestors shouting from the barricaded sidewalk. One man in particular caught her attention.

Breathing deeply, she put down her sign (it read: “Equal Rights for All”) and walked over to him, smiling softly. She put her arms around him and hugged. Then she walked back, picked up her sign and kept marching.

The story does not end here. Months later, at another march, she spotted him again. Again, she was marching, he was shouting. But their eyes locked, and in that moment, all the animosity melted away. He stopped shouting. He softened. He may have even smiled.

“It was in that moment that I understood what making peace was all about,’’ she later told me.

And that is why I teach peace.

Thank you for the story of the young woman in the equal rights march at the end of this column. It gives me encouragement to carry out my ‘plan’: In the past couple years when meditating it came to me that I need not be afraid if someone points a gun at me. I want to be able to smile at them and tell them I want to hug them first. My heart says that if I’m going to die, I want to do so while spreading love.

SUCH AN important idea to teach PEACE and compassion in our SCHOOLS . Its a social and educational tool and attitude and practice which we all need to develop as human beings, the younger the better

Thank you for this article

We also instil violence within our youth by letting computer/video games be violent and have a strongly competitive theme or nature.
These are their learning methods – by impregnating the kids with these ideas in their minds as an acceptable thought process, we condition them to be that way – then we are trying to ‘unlearn’ them.
I am all for creativity and innovation and even use of games for teaching via computer/tech etc but that freedom is contrary to a peaceful society – we and all kids learn by example and do what appears to be acceptable!! If we promoted peace instead, what a different world it could be.

This article makes me wish I personally knew educators with whom to share it. What a wonderful teacher of this course that many could/should be teaching. M.Scott Peck wrote a book called “Community Making and Peace” that gave many examples of how each of us can work toward a peaceful world, beginning with our own smaller groups. Thank you for sending so many enlightened “children” into the world. May their numbers grow so that we will see the changes they will make.

Thanks David for sharing. Its all right. The only thing, that I wanted you to change, is your word “nonviolence”. We think harmoniously. That means, by that word, we see violence. Please talk about “love” or “peace”. Thanks. Felix.

Got me thinking about the divide here in Victoria Australia. Those that believe the government is doing the right thing and who think there’s a better way. Common ground is difficult to find. I’m now going to try talking to a lady to defuse the situation.