The Science behind Breathing in Yoga

Hatha Yoga can be seen as a complete workout for the autonomic nervous system. The sympathetic and parasympathetic nervous systems are both stimulated in turn during forward and backward bends, muscle contraction stimulates sympathetic activity, as does the actual process of stretching. Suddenly, at the end of a posture, you are brought back to baseline. You experience a relaxation (parasympathetic) signal as your muscles relax from tension and stretching.

Yoga trains the Mind to deal with Stress

Yoga involves controlled entry into a pose- or asana- holding the pose in complete stillness, then a controlled release. As you go through this workout, it takes strong prefrontal cortex activity to maintain your concentration and stillness. As you hold a posture, your prefrontal cortex is countering the raised sympathetic signal as it keeps you focused. This is how you train your mind to keep your stress signal under control. As your mind learns how to do this, you get better at doing this even outside of the yoga room. Eventually, with practice, you will be able to maintain self-control in most stressful settings.

When faced with this challenge of overcoming your sympathetic signal in order to concentrate, you can help your mind by using a simple tool at your disposal: your breathing. 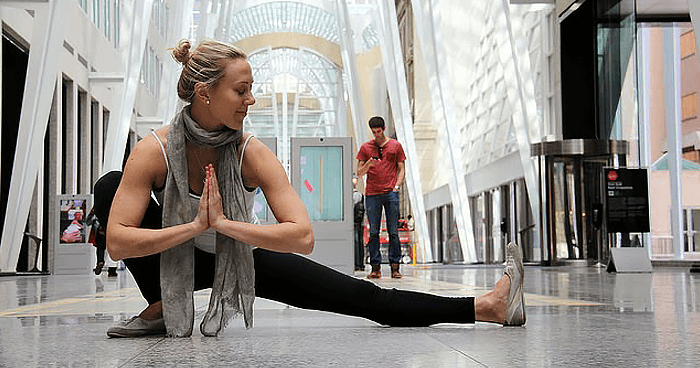 Train your mind to keep your stress signal under control

The heart and lungs have a common purpose in delivering oxygen around the body. The lungs fill trucks with oxygen and the heart pushes those trucks onto the highway across the body to deliver it. It makes sense for the heart and the lungs to work together as a team and we know that the heart’s activity changes as the pattern of breathing changes.

Whenever we breathe in, a nerve called the phrenic nerve makes the flat sheet of muscle at the bottom of our lungs (the diaphragm) contract, which sucks air into our lungs. The phrenic nerve is turned on and off by a signal generator. Nerves that control the process of breathing line a part of the brain’s medulla called the ‘ventral respiratory column’. Within this column lies a specific nerve circuit known as a respiratory ‘central pattern generator’. We also find nerves mediating the sympathetic nerve signal (in the rostral ventrolateral medulla) in this exact same region. We think that such close proximity of breathing signal generators and the nerves mediating ‘sympathetic’ signals may explain why one can so closely influence the other. Breathing changes the sympathetic signal and the sympathetic signal changes how we breathe. The two are tightly linked.
[signupbanner]
This region also receives information from pressure receptors in the neck and aorta (baroreceptors) as well as carbon dioxide ‘alarms’ scattered around the body. Yoga poses also stimulate these baroreceptors during bends. 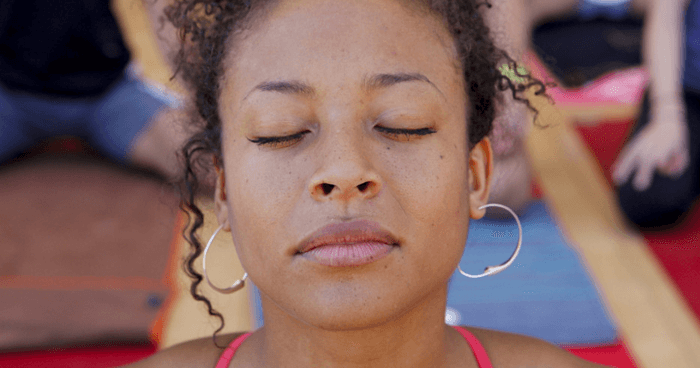 When it comes to yoga, the sympathetic signal-lowering effects of slow deep breathing compliment the efforts of the prefrontal cortex in trying to focus, concentrate and attain a relaxed mental state. Breathing is like an additional tool to calm down a sympathetic signal.

Although there are not many studies on the effect of changing the pattern of breathing on the sympathetic signal, the studies that do exist suggest that we might be able to control our breathing to bring down our sympathetic nerve signal, at least in some cases. 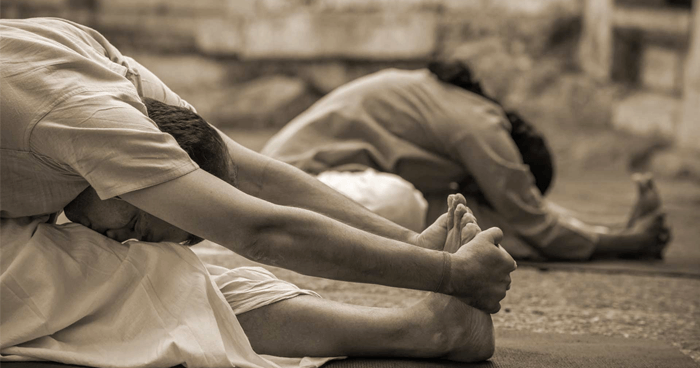 When in a forward bend, also breathe slowly and deeply

During yoga, we see another interesting dynamic taking place. As we move from posture to posture, we are sometimes stimulating pressure receptors in the neck (baroreceptors). This stimulation feeds into the signal generator in the medulla, lowering the sympathetic signal.  Forward bending poses will do this.  If, when we are in a forward bend, we also breathe slowly and deeply, we see a spectacular effect on the sympathetic signal going to the heart as shown in an intriguing case report published in the Journal of Aviation, Space and Environmental Medicine. A healthy young woman was first made to lie flat, then placed so her head was 45 degrees lower than her heart.

When lying flat, her heart slowed down as she breathed a bit more deeply (a phenomenon known as respiratory sinus arrhythmia or RSA). As she breathed 50% more deeply, her RSA doubled, as we would expect. When lying with her head at 45 degrees below her heart, however, this relationship became far more pronounced. In this position, the RSA reached 450% the level at baseline in the lying flat position. Superimposing the head down position with deeper breathing volumes resulted in an extreme RSA, an extreme variation in the sympathetic/parasympathetic signals reaching the heart, suggesting that all these signals act together in synergy, rather then in a simple additive manner. 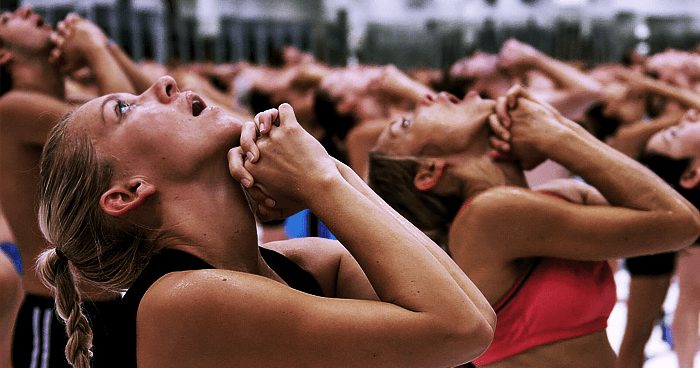 Inhaling deeply and bringing the breathing rate right down can bring the sympathetic signal down. This explains why Pranayama breathing techniques can induce a state of relaxation. Slow, deep breathing techniques can reduce the stress signal temporarily and even help dampen an impending stress response. Focusing on breathing during the practice of Yoga can help you achieve focus and calmness in the face of overwhelming autonomic stimulation. Learning to use breathing to help yourself focus and achieve calmness can be taken out of the yoga room and put into practice in the real world. In the yoga room, you will remember the feeling of your mind reaching peak concentration in the face of stress and with repeated practice, you will be able to repeat that feat anywhere, anytime.

There was a yogi who controlled his breathing. The autonomus control of breathing was lost and the yogi would stop breathing when sleeping. The situation became so bad that he had to get the help of Shirdi Sayi Baba of Maharashtra. So I feel that controlled breathing is dangerous. Let it be autonomus breathing.

Although I am a quite active person yoga practice wears me out more than any heavy weights lifting workout, jogging, hiking, etc. It is not reducing my stress either. I am doing it only because I like to believe people saying that it brings great health benefit.