Deep Awareness of the Universe

Yūgen is an important concept in traditional Japanese aesthetics. The exact translation of the word depends on the context.

To watch the sun sink behind a flower clad hill. To wander on in a huge forest without thought of return. To stand upon the shore and gaze after a boat that disappears behind distant islands. To contemplate the flight of wild geese seen and lost among the clouds… – Zeami Motokiyo

Japanese aesthetic ideals are most heavily influenced by Japanese Buddhism. In the Buddhist tradition, all things are considered as either evolving from or dissolving into nothingness. This ‘nothingness’ is not empty space. It is rather a space of potentiality.

If the seas represent potential then each thing is like a wave arising from it and returning to it. There are no permanent waves. There are no perfect waves. At no point is a wave complete, even at its peak. Nature is seen as a dynamic whole that is to be admired and appreciated. This appreciation of nature has been fundamental to many Japanese aesthetic ideals, ‘arts,’ and other cultural elements. In this respect, the notion of ‘art’ (or its conceptual equivalent) is also quite different from Western traditions…

Japanese aesthetics is a set of ancient ideals that include ‘wabi’ (transient and stark beauty), ‘sabi’ (the beauty of natural aging), and ‘yūgen.’ These ideals, as well as others, underpin much of Japanese cultural and aesthetic norms. Thus, while seen as a philosophy in Western societies, the concept of aesthetics in Japan is seen as an integral part of daily life. Wabi and sabi refers to a mindful approach to everyday life. Over time their meanings overlapped and converged until they are unified into wabi-sabi (侘寂), the aesthetic defined as the beauty of things “imperfect, impermanent, and incomplete.” 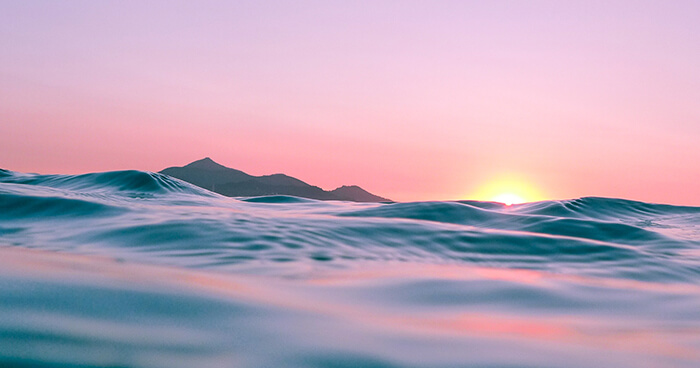 Nature is seen as a dynamic whole that is to be admired and appreciated. Image: Linus Nylund

Things in bud or things in decay, as it were, are more evocative of wabi-sabi than things in full bloom because they suggest the transience of things. As things come and go, they show signs of their coming or going and these signs are considered to be beautiful.

In this, beauty is an altered state of consciousness and can be seen in the mundane and simple. The signatures of nature can be so subtle that it takes a quiet mind and a cultivated eye to discern them. In Zen philosophy, there are seven aesthetic principles for achieving wabi-sabi.

Each of these things are found in nature but can also suggest virtues of human character and appropriateness of behaviour. This, in turn, suggests that virtue can be instilled through an appreciation of, and practice in, the arts. Hence, aesthetic ideals have an ethical connotation and pervade much of the Japanese culture.

What are some ways you have experienced Yūgen or wabi-sabi in your life lately? Please feel free to share in the comments below. We love hearing from you.

Blessings of deep awareness and beauty to you.

Nice blog. Thank you very much

Thank you very much for the information!

Yesterday a friend and I sat on the deck watching the clouds move and change shape before a rain storm began. We began watching in order to know when the rain would begin, but we wound up spending an hour or more watching with fascination as the beautiful process unfolded and feeling the first drops of rain.

Recently, contemplating my consciousness and existence as the goop the is in a cocoon between caterpillar and butterfly, shapeless and free from containment. This concept of Wabi-sabi sure hit home. Thankyou for sharing.

Wabi-Sabi pervades the silence around me while I read this article. This gave me a refreshing idea about how beautiful something is though it is incomplete. I recalled a certain project that never reached completion, and all along I had been grieving that. But Wabi-Sabi makes me appreciate this situation anew. I am in tears. Pure beauty! Thank you!

I experienced Wabi-Sabi in the simplicity of the explanation of the title of this article. Very much appreciated.
In tune,
Adda

That was a beautifully written piece. Like an adagio in words. Thank you.