A Conversation On Masculinity – Part Two

Ian MacKenzie is the Creator and host of The Mythic Masculine podcast, a renowned filmmaker and writer, and the founder of A Gathering of Stories.  This is a continuation of an interview with Ian about the place of masculinity in our modern culture. Read Part One of this interview.

As a man, what do you most proud of?

I’m most proud of the Mythic Masculine Podcasts because what started as a vague idea struck a chord with a lot of people and not just men. I’m up to thirty-one episodes and I’m really pleased with the depth of the conversations. I’ve subsequently created the mythic masculine network, which is an online community. I feel proud of what we’ve been able to achieve in a short time.

As a man what are you most hurt by?

I’m soul hurt when I look to leaders or who ‘should’ be leaders who demonstrate an immature, egoic, narcissistic petty way of being. It is deeply unbecoming to their positions of leadership. Certain men have risen to positions of power and have failed so utterly. The privilege and the power and granted to them are squandered by not recognising and not taking seriously their responsibilities to people and to life. It’s deeply painful to be in the presence of that. To be powerful and to really harness it into purposeful service is a great privilege.

What advice can you give to young men who feel as you did; lost and without any real rights of passage ritual or strong authentic masculine rules? Where can they start their journey into strength and vulnerability?

This is really why I created Mythic Masculine Podcasts. Initially, I really did struggle to find places to go. There’s now a plethora of books, articles and resources but there’s been a struggle to find real embodied modelling that men can directly connect with and I think that’s changing. The broad subject of men’s work as a whole has certainly begun flourishing. We’re in the process of rebuilding healthy masculine culture. 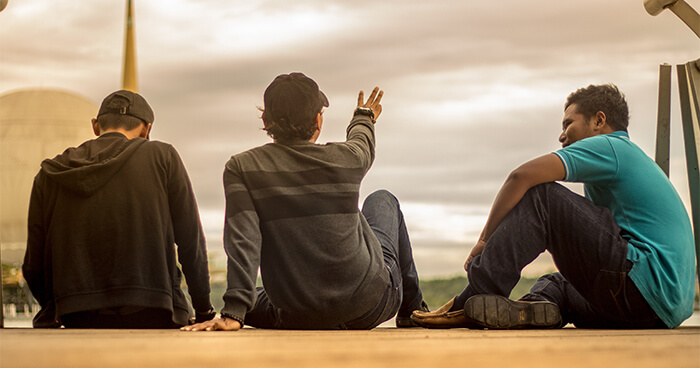 Often the literature, for example, archetypal psychology, can feel over the heads of younger age groups. So I’m really grateful that there are certain organizations that are deliberately providing pathways and offerings to younger men: Journeymen which is in the Seattle area; Rites of Passage Institute in Australia etc. There are organisations springing up all over. Best to google in your local area and follow any leads. Someone will point you in the right direction.

What are your feelings or thoughts about the ever-evolving sphere of sexual identity and sexual orientation?

I’m thinking of Robert Bly’s book Iron John, I believe he talks about how homosexuality and how it changes depending on the culture and the time. You know whereby in ancient Greece homosexuality was actually just one part of masculinity. It’s much more inclusive now because of gender activists and social media which gives a much more expanded set of expressions of sexual orientation, gender identity etc. and leads to the natural deconstruction of what gender is — is it a spectrum or is it a social construct? The polarities are dissolving and energetic expressions of orientation becoming more fluid. The conversations around male, masculine and masculinity just get more interesting and diverse.

What medium of storytelling really lights you up? Favourite story-tellers and creatives?

I’ve been a documentary filmmaker for thirteen years, this has been the medium of my choice. There’s something in filmmaking whereby it unfolds and has a dynamic beauty to it but it takes far longer to bring that story to the world. It can take several years. So I’m really drawn to the tradition of oral storytelling which is what we are crafting for A Gathering of Stories. It’s so immediate, so alive in the moment and there is this connection between the audience and the storyteller and the story itself. It’s an art form that I’m pretty excited by and I’m stepping into more but at this event, I really want to just be in the field of these other talented folk who have really given their lives to this craft. Favourites at the moment are Jan Blakes and the rest of our awesome lineup: Bayo Akomolafe, Sharon Blackie, Michael Meade, Tom Hirons, Pat McCabe, Andreas Kornevall.

I think all you can do as a storyteller is hold up a mirror. — Jan Blake

A Gathering of Stories is for anyone who’s interested in the craft of story, storytelling or maybe just curious about it. Or anyone who is interested in the subject of masculinity, male leaders, the patriarch, the 2021 renaissance man etc. would be fascinated and inspired by the diversity of perspectives. Listening to the conversation is being part of the energetic zeitgeist of the topic — It matters. It informs and motivates change. We aspire to create a sacred space too, so there’s a chance to explore safely. Everyone is invited! The medicine of story is for everyone.

What potential lies in the power of Story?

Story is a kind of nourishment for our times. Stories have the capacity to bring forth new insights which often don’t fit into the clean binary narratives that maybe we’re unconsciously used to. People are tired of these polarities, especially in politics that produce a kind of deadlock. The left and the right are utterly convinced of their own ‘rightness’. Stories have the capacity to delve into the light and the shadow before drawing obvious conclusions. Its very nature is to arc, to explore, to find transformative ground. We need to develop this quality and to light alternative pathways otherwise invisible to us — a visionary possibility!

People have innate energies that desire fresh future possibilities. Often those energies are stuck until we have the capacity and practice to envision, to imagine, to tell stories about where we might go. There is a deep longing for that energy to be put into service for the greater good — an intelligence of life that needs to find the right way to flow. Stories with a particular visionary capacity create the subliminal scaffolding for the conscious participation in bringing those narratives and ideas to life.

What wild imaginings are inside of you? What energies for Unity, Peace and Love are waiting to burst forth and into manifestation? Start with the murmurings of an idea — It might not even have language yet but you recognise it as a feeling or sensation that wants expression. Honour that feeling: draw, paint, sketch, write, garden, play or write music, listen to great storytellers. Let your inspiration find its own kind in the inspiration of others.