Why We Must Save Dying Languages

Welcome to UPLIFT
Why We Must Save Dying Languages
Is Common Language Killing off Ancient Ecological Knowledge?

You probably know that much of the world’s environment is under threat. But a new study says languages are disappearing alongside plants and animals.

The study, from the World Wildlife Fund, measured the threat to languages using a scale that tracks how threatened species are. Not only are many languages steadily losing speakers, says co-author Jonathan Loh, but “the rate of decline, globally, is actually very close to the rate of decline in populations of wild vertebrate species.”

There’s the obvious threat of in-demand languages, which many people start speaking more and more, as the speakers of smaller languages dwindle. “Thousands of indigenous languages spoken around the world are being replaced by one of a dozen or so dominant world languages like English, Spanish, Mandarin Chinese,” he says.

But Loh, who’s also a research associate at the Zoological Society of London, says that languages are dying off due to many of the same issues that plants and animals face. He comments:

And that’s no coincidence. Loh explains that languages have a lot of specific local knowledge built in. 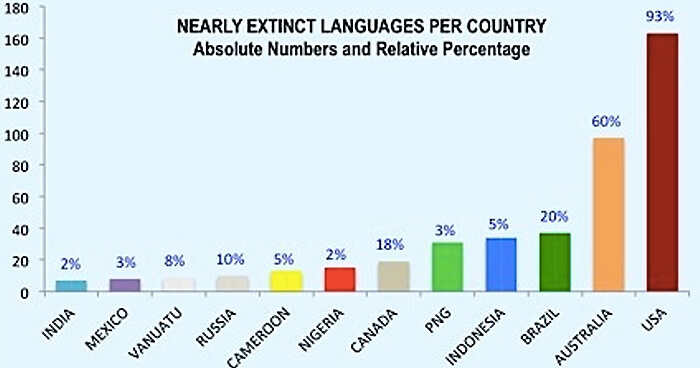 The vertical axis represents the number of nearly extinct indigenous languages; the number in blue its relation (in percent) to the total number of native languages still spoken in same country. (Source: National Geographic, 2013)

The Knowledge Embedded in Languages

The cultures have evolved in a particular environmental context, so they have an extraordinary amount of traditional ecological knowledge — knowledge of the local species, plants, animals, the medicinal uses of them, the migration patterns of animals behavior,

So when the languages die off, much of that knowledge goes with them. “Then children stop learning the language, they also stop acquiring that traditional knowledge,” Loh says.
[signupbanner]
There are plenty of linguists who are studying and trying to preserve native languages, but Loh wants to see them work with biologists to make sure that valuable ecological history isn’t missed. “Linguists often don’t have the knowledge of natural history that’s necessary in order to be able to record an endangered language because so much of the lexicon is tied up with names of species or types of ecosystems,” he says.

…if we can recognize that culture and nature are inextricably interlinked, then working on a biocultural diversity as a whole, as a subject, would be a more fruitful way of looking at conservation.

The Link Between Culture and Nature 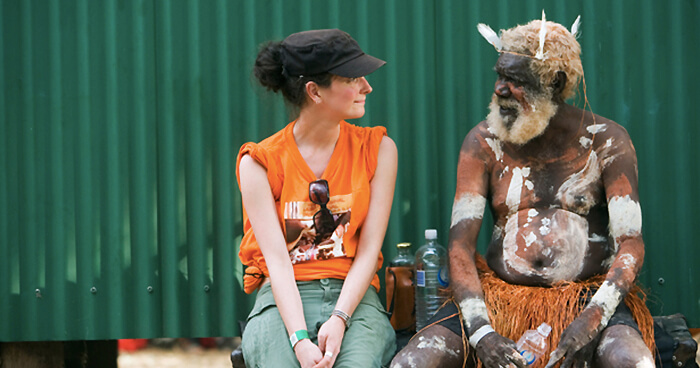 An Aboriginal man from Laura, QLD; part of a Northern Australian ‘hotspot’ of dying languages.

Loh says languages are disappearing most quickly in Australia and the Americas. “About three-quarters of the languages of the Americas are under the threat of extinction,” he says, and “95 percent of the indigenous aboriginal Australian languages are … declining extremely rapidly.”

“And, as with species,” he warns, “when a language is lost, it’s gone forever. You can never get it back.”

There’s this extraordinary wealth of traditional ecological knowledge that’s bound up with a lot of the world’s indigenous languages, and I think it would be really useful to biologists in understanding how to manage natural ecosystems.

Over the past century alone, around 400 languages – about one every three months – have gone extinct, and most linguists estimate that 50% of the world’s remaining 6,500 languages will be gone by the end of this century, with some putting the figure as high as 90%. Today, the top ten languages in the world are spoken by around half of the world’s population. We could even be facing a future world where only one language is spoken globally, but while it’s important for everyone to understand each other, perhaps there’s a way we can preserve the wisdom of ancient languages at the same time.