Why Surfing is Addictive

It’s like the mafia. Once you’re in – your in. There’s no getting out. – Kelly Slater

When I first moved to Australia about 20 years ago, one of the first things I noticed at the beach was how surfers would arrive to the parking lot when the waves were good, and literally run from their cars/bikes/scooters, to the water with their boards. When I started surfing shortly thereafter, strangely the same phenomena began happening to me.  The anticipation would build during the drive and it didn’t seem to matter how early I got there. If the surf was good, I instantly felt almost panic to get into the water.

Recently there’s been a lot more than usual shark activity in the waters near where I live, including a couple attacks.  And while research shows us that we are about 30 times more likely to be struck by lightening (and over 3,000 times more likely to be injured by our own toilet – go figure?) than by the jaws of a shark, multiple local encounters has shaken the community and kept many people painfully out of the water. A couple weeks in, I began hearing locals (only half jokingly) suggesting the need for free mental health checks at the clinic to help surfers cope with the angst of being deprived of their daily fix.  A few days later a friend of mine and I couldn’t hold back any more so we paddled out at one of our favorite breaks and discovered about 50 other surfers in the water just like us. Surfacing with an uncontrollable smile after my first wave, I started asking myself, what calls us into the water like this, despite very real (or even imagined) risks? The answer I came up with was quite simple. Surfing is addictive… in the very best of ways. And here’s a couple reasons why. 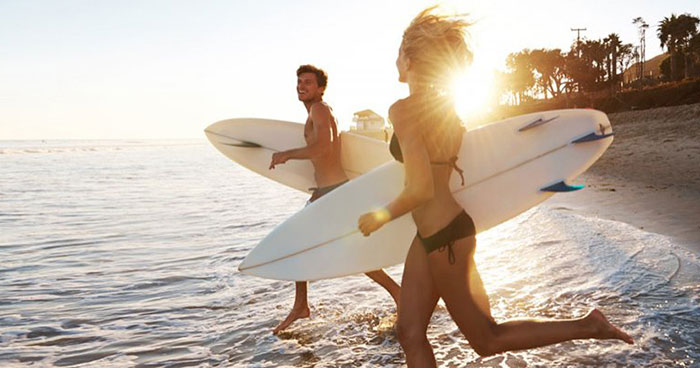 I noticed how the surfers were literally running to the water

Out of water, I am nothing. – Duke Kahanamoku

The basic fitness benefits of surfing are  multiple and quite obvious (including cardiovascular and muscle/movement development from the moment you enter the water). By placing the activity out in the ocean (a vast field of health-enhancing negative ions) often early in the morning (positive exposure to Vitamin D from the sun) in cold salt water (cleansing the sinuses and supporting telomere growth, which science now attributes to extending our life), the vitality factor measures off the charts.

It’s also hugely meditative and has a way of infusing the body and mind with a powerful combo platter of peace and exhilaration. The turbulence created by breaking waves actually alters the physical structure of the air and water, breaking apart water and air molecules and releasing charged ions which scientists believe trigger the release of endorphins (a.k.a. “inner dolphins”) and serotonin – increasing blood flow and oxygen circulation through our bodies.

Surfing is the most blissful experience you can have on this planet, a taste of heaven. – John McCarthy 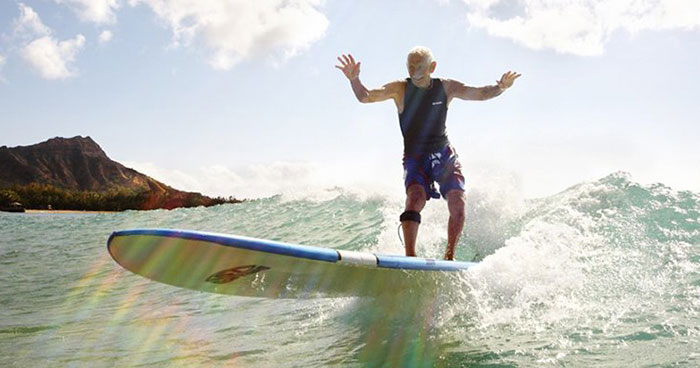 Interestingly, several years ago I attended my first Qigong class with a master of the art. Prior to the class I spoke with the master who asked me if I had ever done Qigong before. I said no, but that I surfed most days. When he heard this he smiled and replied. “Ah yes… Surfing is one of the very most powerful forms of Qigong. When you are in the ocean you are literally surrounded by Qi (life-force), and the act of moving with this energy… riding this energy, is a pure expression of the principles of Qigong. If you surf, you probably don’t need to learn Qigong… But I will teach you anyway.”

I once heard my surfboard shaper describe one of the reasons why he believes that the act of surfing is so special (and addictive). He said, “Think of it this way… Waves often begin as subtle shifts in atmospheric pressure many miles from the Earth’s surface. These shifts build into air currents and storms which form epicentres of energy way out in the middle of the ocean. Wind swell forms surface waves which deepen into ground swell, merging with others and rolling into rhythmic pulses over thousands and thousands of nautical miles, gaining energy and momentum until eventually being compressed by the shallows of approaching land. Mirroring the shape of the rising seafloor, the swell is pressed up to a peak, before peeling off in a perfect cylindrical tube, exploding onto the reef, the sand or the stones of land. When you have the gift of riding a wave you are interacting with the very climax moment of a many thousand mile, multiple elemental journey. A crescendo of cosmic proportions.”

I took off on a wave, went down the side, popped out the other end, and went, shit, I’m still alive! – Greg Noll 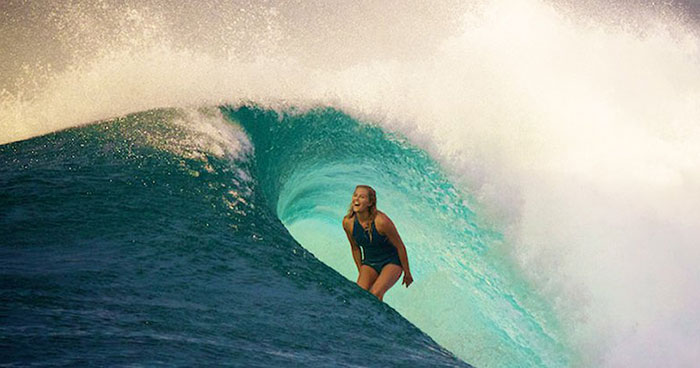 Ask anyone who surfs and they will verify the feeling. No matter what size or shape of board or human, there is something quite extraordinary, quite magical really, about standing (or sitting, kneeling, laying) right in the focal point of a breaking wave as it peels along the shore completing its epic journey from the vastness of the universe in a single climactic moment. It doesn’t matter how tired or sore or lonely you might have felt a few seconds ago, the moment you are soaring along the face of a wave, nothing else exists. You are in the flow, connected, tuned in, aligned and alive. Otherwise you simply wouldn’t be there.

I think when a surfer becomes a surfer, it’s almost like an obligation to be an environmentalist at the same time. – Kelly Slater

According to Human Needs Psychology, six core emotional needs drive our behavior. The needs are progressive leading from the basic need for certainty, variety, significance, love, growth and ultimately contribution. Interestingly, when someone has a activity in their life that stimulates and satisfies three or more of the basic human needs, the activity is marked as a prime target for (you guessed it) addiction. Addictions can manifest themselves positively or negatively and in the case of surfing (which ticks off pretty much all six of the Human Needs) I have certainly seen both. One of the great expressions of the surfing addiction is the growing wave of surfers around the world who have translated their love of the ocean into foundations and real world action that is devoted to protecting and preserving the life within it. For every single human killed by a shark, we take the lives of more than 2 million sharks (over 100 million sharks a year, 75 million of which for their fins alone!). Organisations like Surfers for Cetaceans, co-founded by professional free surfer Dave Rastovich,  galvanizes the surfing community globally to channel their passion for the ocean and its sacred life forms into creative initiatives that have awakened new levels of positive stewardship in many lands.

Having grown up skiing and snowboarding in the snowy mountains of Colorado, I thought I would pick of surfing easily.  I didn’t. At all. In fact I can say without question it was the most humbling learning curve of any sport I’ve ever attempted – in part because I assumed I could just apply what “I knew” from other sports to this one. This theory was pounded out of me onto the sandbank repeatedly, until I genuinely, humbly allowed myself to step to the waters edge in a space of “not knowing”, and from there, the ocean began to more gently share its rhythms, one wave at a time.

You can’t stop the waves, but you can learn to surf. – John Kabat-Zinn

The great thing is that each time we align with, paddle onto and ride a wave in the ocean, we also build a tangible reference point of what that feels like in life. These days, I notice that often times when I am preparing to begin a workshop, presentation or important business meeting, rather than thinking about the details of the event, I often just sit there and quietly imagine myself surfing. That’s probably partly because I’m addicted to surfing and I like thinking about it anyway, but I’ve also come to experience that as I take time to tune into the connection, energy, and powerful sense of flow of surfing in my mind, those feelings build in my body and carry me like a wave at sunrise, right into parallel experiences in life.

The best surfer out there is the one having the most fun.
– Phil Edwards

I totally believe that surfing is addictive because I have been there. But you cannot compare it to meditation. Most of the surf beaches are crowded, and what you see is constant yelling and people hassling each other for waves