When the Middle East chooses Love

BY Amir Paiss
Welcome to UPLIFT
Stories of Love
When the Middle East chooses Love
There is a beautiful story that originates from Native American tradition...

A grandfather tells his grandson “Two wolves live in my heart, one is full of rage and hate, short tempered and fearful, vengeful and violent. The other is gentle and considerate, patient and compassionate… and they are at war inside my heart.”
“Which one of them will win the war in your heart?” asks the young boy.
The old man answers: “The one I feed”.

Usually the news from the Middle East is associated with war, violence and conflict. While the promise of the Arab spring revolutions can seem a bit faded by the clouds of social disruption and the elections in Israel that are nearing, the ancient question that this story illustrates is more relevant than ever, not only for the grandfather’s heart, but also for the whole Middle East and, in fact, for the whole world.

Which wolf do we feed?

This is not a political issue, nor it is a question of who has better arguments for their agenda. It is simply a choice between two distinct modes of operation- one is fuelled by antagonism; the other is fuelled by inspiration. One is the Path of Fear and Hate, and the other is the Path of Love. Fear is expressed through hate that offers activism as an act ‘against’ and Love offers activism as an inspired act ‘for’. Most leaders in the Middle East refer to their respective holy books and to their faith as the main compass in navigating the rough waters of this tough neighbourhood. Perhaps they all need to be reminded of Leo Tolstoy’s immortal quote: 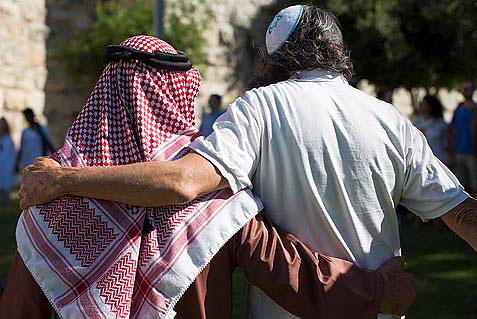 If Love had an opposite, it wouldn’t be hate – it would be fear… One of the greatest examples of choosing love in the Middle East is the late Rabbi Menahem Froman, a settler and a peacemaker, who said: ‘The Love for the Palestinians is the essence of my religion”. This may seem radical to those who promote violence as a solution to the Middle East’s conflicts, but Choosing Love is more effective and way more powerful. There are grassroots Peacemakers who are working tirelessly through choosing love over fear and although they may be invisible to the mass media, their effects ripple deep and educate many in experiential and un-conventional ways, such as the ‘Way to Sulha’ prayer in Abraham’s tomb in Hebron (see video below).

Why is the best option for the Middle East to Choose Love?

Because this is the only way in which the Middle East can truly evolve into a region of genuine and sustainable Peace. It begins, as all belief systems and programming do, in our education. Dr. Bruce Lipton, in his groundbreaking scientific work (Epigenetics) and his writings (Biology of Belief), points to the crucial importance of our early childhood education programming. Perhaps here is where the key to Peace in the Middle East lies. When we choose Love over Fear, we actually re-educate ourselves and thus we educate our children to seeing one another as partners for Peace rather than rivals for war. This choice can change the Middle East and be a living example for the whole world.

An historic prayer for peace by Muslims and Jews at the the tomb of Abraham, the forefather of both religions