BY Chip Richards
Welcome to UPLIFT
What is Migaloo’s Message?
The Return of Migaloo

In ancient lore and prophecy, the birth of rare animals often represents a message, birthing or rebirthing of something new for humanity. White animals in particular have long been revered as symbols of purity and peace, seen as omens of good fortune, fertility and bountiful harvest. Some even describe them as being imbued with supernatural or magical powers. Interestingly, in recent decades, rare and beautiful white animals have begun to appear in many places, shapes, and sizes, calling forth both scientific curiosity and indigenous recognition. From white lions, tigers and buffalo, to white giraffes, zebras and gorillas; robins, foxes, dolphins, pythons, leopards, crows and even white black bears – to name a few.

According to Chief Arvol Looking Horse, traditional leader of the Lakota clan of the Sioux nation and 19th generation Keeper of the White Buffalo Calf Bundle, the arrival and appearance of these white animals brings both blessings and warnings – heralding a time of great urgency for the Earth and a deep calling for humanity to come back into the right relationship with the natural world and our own true nature. It is believed that the appearance of such animals is calling for us to see past the colour of our skin and the differences of our cultures. To come together as one – brothers, sisters, and children of Mother Earth. 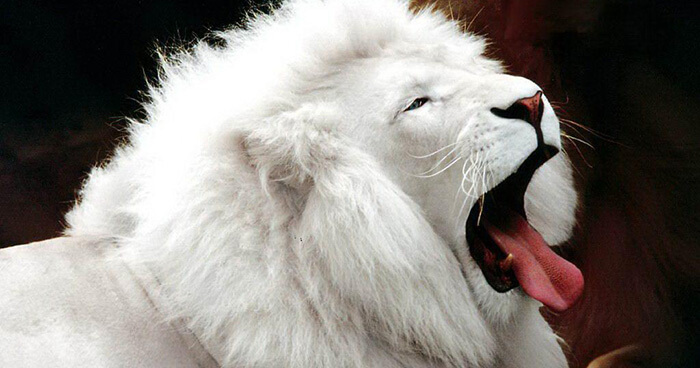 The arrival and appearance of these white animals brings both blessings and warnings.

One of the most unique and powerful expressions of this rare animal phenomena comes in the form of the pure white Humpback Whale, Migaloo, who has in recent days been spotted on multiple occasions during his northward migration along the East Coast of Australia.

Whales have lived in harmony in our oceans for over 50 million years. They are of the most immense, intelligent and physically powerful creatures on the planet… yet they are also among the most gentle. Their peaceful ways and their willingness to connect with humanity, despite the lack of mutual respect they often receive, hints at a level of mastery and sentience aspired to by our greatest earthly teachers.

Unfortunately, commercial whaling practices in the last century brought many whale populations down to the brink of extinction in the late 1950s. By 1962, on the East Coast of Australia, Humpback Whale numbers once estimated at 40,000, had dropped to around 500. Dubbed “commercially extinct”, there were no longer enough whales left to justify keeping whaling stations open, so commercial whaling eased off in Australia and the whales began a very gradual journey of recovery. In 1982, this recovery was helped by a global moratorium on commercial whaling adopted by the International Whaling Commission. Interestingly, right about that time (researchers suggest) Migaloo, one of the world’s only pure white whales, was born. 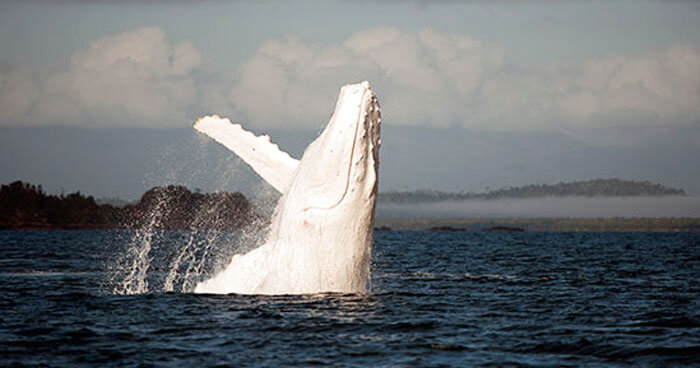 Whales have lived in harmony in our oceans for over 50 million years.

Migaloo and the Return of Humpbacks

Migaloo was first spotted in 1991 by a group of volunteers conducting a whale count off the coast of Byron Bay, New South Wales. At the time, he was estimated to be 8-10 years old.   The whale was named by Australian Aboriginal Elders as ‘Migaloo’, meaning ‘White Fella’. During the naming of Migaloo, the elders explained their reverence and connection to all white or albino animals, offering a deep reminder for humanity to respect all forms of life, even if they appear different than ‘normal’. In the ancient language, Migaloo also represents Yiragir, the Great White Whale – Great, Great Grandmother and the Creator in many of the Aboriginal creation stories.

Over the past 25 years, Migaloo has been seen dozens of times, making appearances every couple of years in different places along the coast. During this time, he has become an icon of the peaceful magnificence and mystery of the whales – a symbol of their fragility, the importance of our protection of them, and of their return.

Today, at a time when much of our scientific research now points toward the collapse of ecosystems and accelerated extinction of many species, it is powerful to recognize that the numbers of Humpbacks along the East Coast of Australia has made an incredible recovery from 500, back up to over 26,000.
With the return of Humpback Whales in large numbers along the East Coast of Australia, more and more people are meeting them in the water, witnessing their graceful power and majestic way of being. And under water, more and more people are hearing their song. 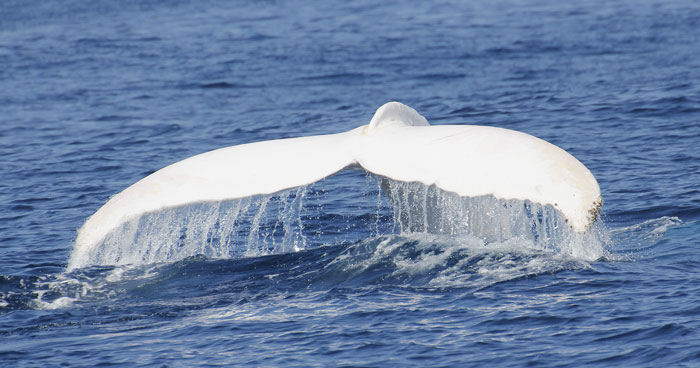 Migaloo has become an icon of the peaceful magnificence and mystery of the whales.

Awakening the One Song

Similar to the way that tribal lore is passed down through Songlines among Aboriginal people, the Humpback Whale song is shared down through generations in sonic streams that stretch thousands of miles and keep them connected to each other under water.

One of the most extraordinary discoveries about the Humpback’s song is that even though the song has complex verses and chorus (lasting many hours in a stretch) and even though the melody changes and evolves each year, at any given moment, across an entire region of ocean… All of the whales are singing the same song.

Imagine if humanity could find a way to ‘sing one song’ together? A song where each of us brings our unique voice and vision to the circle in such a way that it does not divide or separate, but unifies, honours, and connects us all? Perhaps this is one of the messages that Migaloo brings us in raising our awareness and unifying our efforts to witness, connect with and protect his species. 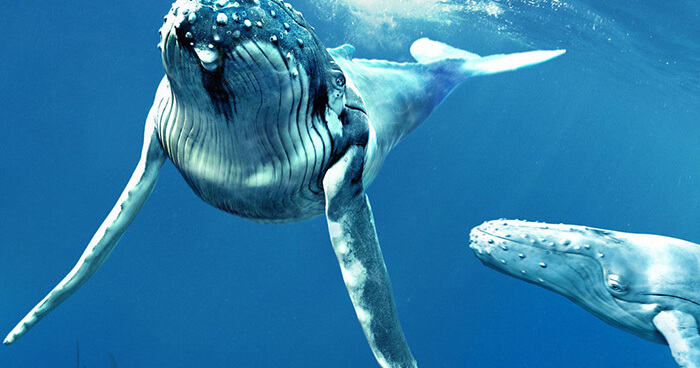 All of the whales are singing the same song. Migaloo and his family by Kimsu Young.

A Message of Healing?

In medieval Europe, it was believed that white mice brought messages from the souls of departed children. In the Hindu tradition, the white elephant was said to proclaim the birth and presence of Gautama Buddha. What is the message of Migaloo and the Humpback Whales? Perhaps in his graceful immensity, Migaloo and his pod are giving us a glimpse into a deeper and vaster aspect of our own being. Perhaps they are calling forth the song of humanity to weave more positively into the great creation song of life. To protect and honour those who are ‘different’ and in so doing, protect the whole. To join together again as one family and remember how powerful we are when we move in peace, for the greater good of all.

I once heard a marine biologist say, “I have never seen anything have such a profound impact on people of all ages and walks of life, as when a whale surfaces from the deep, simply to breathe.” If you have ever been on or in the water near whales in the wild, you will have felt the sense of deep awe and magnificence permeate the air and hearts of who were there to share it. Often indescribable but profoundly real. Many people say their entire lives have been changed by a single moment of eye contact with one of these great beings. Perhaps the only way to truly know what message Migaloo and his family have for us is simply to spend more time together listening. 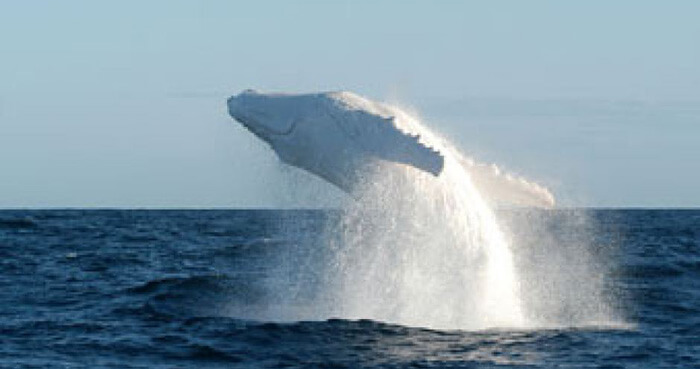 What is the message of Migaloo and the Humpback Whales?

The following is an actual recording of Migaloo’s song, captured by the founders of The Oceania Project, Trish and Wally Franklin in 1998. Trish and Wally have communed and researched Australian Humpbacks for over 25 years and their annual photographic tracking of the East Coast pods gave them the ability to match previous images of Migaloo with recent sightings to confirm it is in fact the same whale.

With this recording of the song of the White Whale, The Oceania Project honours Uncle Lewis Walker, Aboriginal Elder of the Wahrlabal Tribe of the Bundjalung Nation and a Keeper of the Ancient Songlines of the Whales. Uncle Lewis and his people still live very close to the land, and in their tradition, Uncle Lewis’ role is to be a bridge between the wisdom and way of his people and the global community, with a fundamental aim of bringing unity once again to all tribes. He does this by sharing songs and story, and by bringing people out into the country where he and his people still live very close to the land. Sharing a deep understanding of the relationship between the elements, animals, Earth, and humanity, Uncle Lewis reminds us that all of Earth’s creatures are our brothers and sisters. When he speaks of Yiragir, the Great White Whale, he speaks of her not as a symbol or metaphor, but as the true expression and embodiment of his Great, Great Grandmother.

Read about Feeding the Right Wolf.

What a load of nonsense. Also the indigenous in Australia have a very different view of the whale you feature here. He’s not an omen – he’s a whale.