We are Made to Live Together

It really boils down to this: that all life is interrelated. We are all caught in an inescapable network of mutuality, tied into a single garment of destiny. Whatever affects one directly, affects all indirectly. We are made to live together because of the interrelated structure of reality.
– Martin Luther King, Jr.

A battle, by nature, requires two opposing sides. From a disagreement between individuals to war between nations, it is all too common for us to see the other side as someone or something separate from who we are and what we know.

But what happens when we realize that all of humanity – indeed all of life – is interrelated and who or what we thought our enemy to be is somehow a part of us?

In this somewhat unknown speech from 1967, Martin Luther King Jr. reminds us that understanding our connectedness and interdependence is critical to bringing peace to the world. 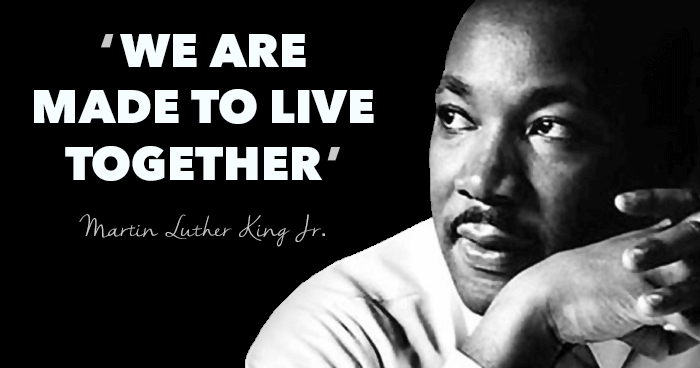 “If we don’t have good will toward men in this world, we will destroy ourselves by the misuse of our own instruments and our own power. Wisdom born of experience should tell us that war is obsolete. There may have been a time when war served as a negative good by preventing the spread and growth of an evil force, but the very destructive power of modern weapons of warfare eliminates even the possibility that war may any longer serve as a negative good.

And so, if we assume that life is worth living, if we assume that mankind has a right to survive, then we must find an alternative to war and so let us this morning explore the conditions for peace… And as we explore these conditions, I would like to suggest that modern man really go all out to study the meaning of nonviolence, its philosophy and its strategy.

We have experimented with the meaning of nonviolence in our struggle for racial justice in the United States, but now the time has come for man to experiment with nonviolence in all areas of human conflict, and that means nonviolence on an international scale. 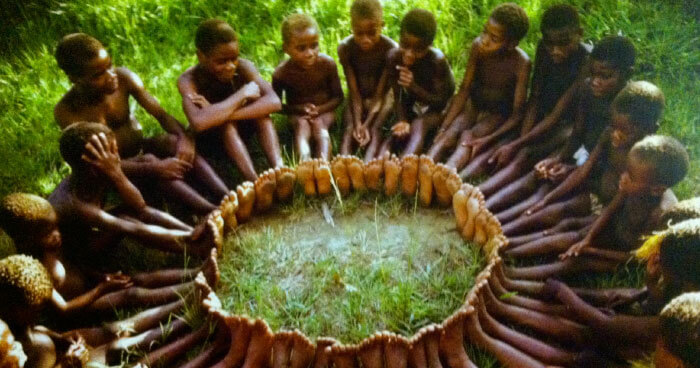 Children naturally understand how connected we all are

All individuals and nations are interdependent

Now let me suggest first that if we are to have peace on earth, our loyalties must become ecumenical rather than sectional. Our loyalties must transcend our race, our tribe, our class, and our nation; and this means we must develop a world perspective.

No individual can live alone; no nation can live alone, and as long as we try, the more we are going to have war in this world. Now the judgment of God is upon us, and we must either learn to live together as brothers or we are all going to perish together as fools.

Yes, as nations and individuals, we are interdependent. I have spoken to you before of our visit to India some years ago. It was a marvellous experience; but I say to you this morning that there were those depressing moments.

More than a million people sleep on the sidewalks of Bombay every night; more than half a million sleep on the sidewalks of Calcutta every night. They have no houses to go into. They have no beds to sleep in. As I beheld these conditions, something within me cried out: “Can we in America stand idly by and not be concerned?” And an answer came: “Oh, no!”

And I started thinking about the fact that right here in our country we spend millions of dollars every day to store surplus food; and I said to myself: “I know where we can store that food free of charge- in the wrinkled stomachs of the millions of God’s children in Asia, Africa, Latin America, and even in our own nation, who go to bed hungry at night.” 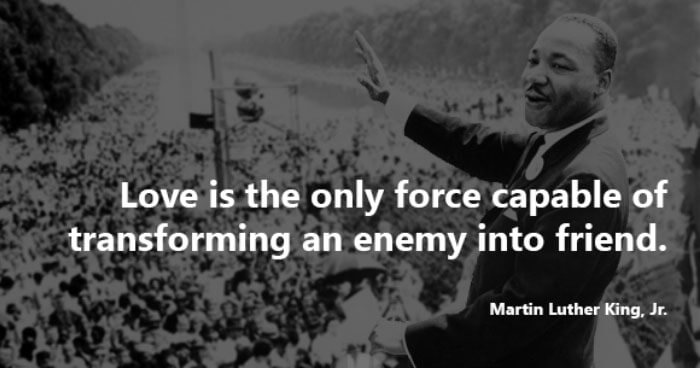 We rely on each other all the time, even if we don’t realize it

It really boils down to this: that all life is interrelated. We are all caught in an inescapable network of mutuality, tied into a single garment of destiny. Whatever affects one directly, affects all indirectly. We are made to live together because of the interrelated structure of reality.

Did you ever stop to think that you can’t leave for your job in the morning without being dependent on most of the world? You get up in the morning and go to the bathroom and reach over for the sponge, and that’s handed to you by a Pacific islander.

Or maybe you’re desirous of having cocoa for breakfast, and that’s poured into your cup by a West African. And then you reach over for your toast, and that’s given to you at the hands of an English-speaking farmer, not to mention the baker.

And before you finish eating breakfast in the morning, you’ve depended on more than half of the world. This is the way our universe is structured, this is its interrelated quality. We aren’t going to have peace on earth until we recognize this basic fact of the interrelated structure of all reality.

Now let me say, secondly, that if we are to have peace in the world, men and nations must embrace the nonviolent affirmation that ends and means must cohere. One of the great philosophical debates of history has been over the whole question of means and ends. And there have always been those who argued that the end justifies the means, that the means really aren’t important. The important thing is to get to the end, you see. 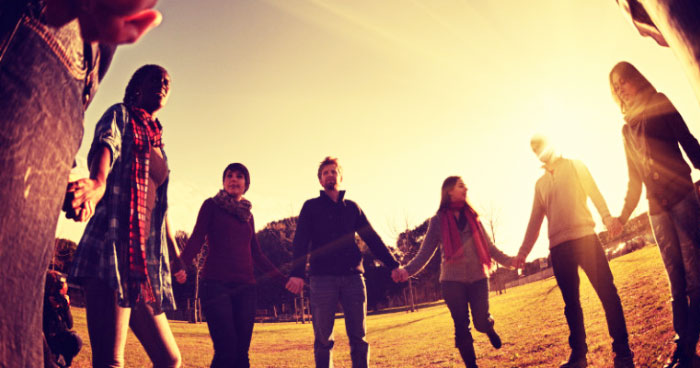 Coming together in peace, to find peace together

So, if you’re seeking to develop a just society, they say, the important thing is to get there, and the means are really unimportant; any means will do so long as they get you there. They may be violent, they may be untruthful means; they may even be unjust means to a just end.

There have been those who have argued this throughout history. But we will never have peace in the world until men everywhere recognize that ends are not cut off from means, because the means represent the ideal in the making, and the end in process, and ultimately you can’t reach good ends through evil means, because the means represent the seed and the end represents the tree.

It’s one of the strangest things that all the great military geniuses of the world have talked about peace. The conquerors of old who came killing in pursuit of peace, Alexander, Julius Caesar, Charlemagne, and Napoleon, were akin in seeking a peaceful world order.

What is the problem? They are talking about peace as a distant goal, as an end we seek, but one day we must come to see that peace is not merely a distant goal we seek, but that it is a means by which we arrive at that goal. We must pursue peaceful ends through peaceful means.

All of this is saying that, in the final analysis, means and ends must cohere because the end is preexistent in the means, and ultimately destructive means cannot bring about constructive ends. 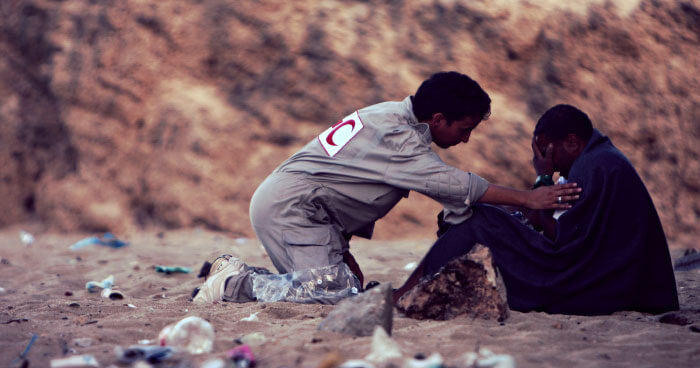 All people must be respected as part of the human family

Affirming the sacredness of all human life

Now let me say that the next thing we must be concerned about if we are to have peace on earth and good will toward men is the nonviolent affirmation of the sacredness of all human life.

Every man is somebody because he is a child of God. And so when we say “Thou shalt not kill,” we’re really saying that human life is too sacred to be taken on the battlefields of the world. Man is more than a tiny vagary of whirling electrons or a wisp of smoke from a limitless smoldering. Man is a child of God, made in His image, and therefore must be respected as such. Until men see this everywhere, until nations see this everywhere, we will be fighting wars.

Wow! What an amazing speech by a truly awe-inspiring man. MLK Jr. as well as Mahatma Gandhi are two of my all time favourite people. They both stand as powerful examples and beacons of light in a world of confusion and fear. I’m taking the time today, this special holiday in celebration of that incredible man and learning more about him and his story. I haven’t heard a lot of his speeches, so this was powerful and eye-opening! Thank you so much for sharing, I am deeply appreciative from the bottom of my heart and the depths of my soul. Namaste soul tribe family.

I think what it so sad to me is the fear factor which ends up putting us in a trust deficit. People are often afraid to trust the “other”, especially given the behavior of some. So somehow in our minds “other” becomes untrustworthy or bad. In the past and even today, American’s have proven their untrustworthiness in taking what they desire from others i.e., Native American Genocide, eminent domain, lobbying practices, and even the ones with money buy-out the ones without means. Usually ripping them off. How does one practice trust and seed peace among those who have a track record of not being trustworthy?