Chances are that you, or someone you know, has experienced being depressed. It is estimated that on average, 1 in 6 people will experience depression at some stage in their lives, and it’s the leading cause of disability worldwide. The symptoms can range from minor to very severe.

Feeling the love, support and compassion of an entire community can be a very effective way to address depression. There’s a lot to be learned by treating depression with tribal wisdom from traditional cultures, rather then the strictly ‘individual’ way of western medicine.

Andrew Solomon had suffered from depression for many years. In his attempts to better understand this illness, his journey has taken him across the globe, interviewing many people who share his affliction.

His research took him as far as West Africa where he participated in a Senegalese Ndeup ritual, a tribal ritual for depression, and concluded that it was probably better than many forms of group therapy that he attended in the US. He describes the Ndeup as an astonishing experience, even though he didn’t believe in the animist principles behind it. Moreover, he was incredibly touched and exhilarated that all of those people had been gathered together, cheering for him.

African Rituals that Are Effective in Treating Depression

Many years later Solomon discussed his experience with a Rwandan man, still unable to entirely describe which essential elements of the ritual so significantly lifted his spirits. The Rwandan man explained that they have similar rituals in East Africa and, in comparing these rituals with standard western psychotherapy, makes it clear why the African rituals are effective in lowering depression:

“You know, we had a lot of trouble with Western mental health workers, especially the ones who came here right after the genocide. They came and their practice did not involve being outside in the sunshine… which is, after all, where you begin to feel better. There was no drumming or music to get your blood flowing again – when you’re depressed and low you need to have your blood flowing. There was no sense that everyone had taken the day off so that the entire community could come together to lift you up and bring you back to joy. 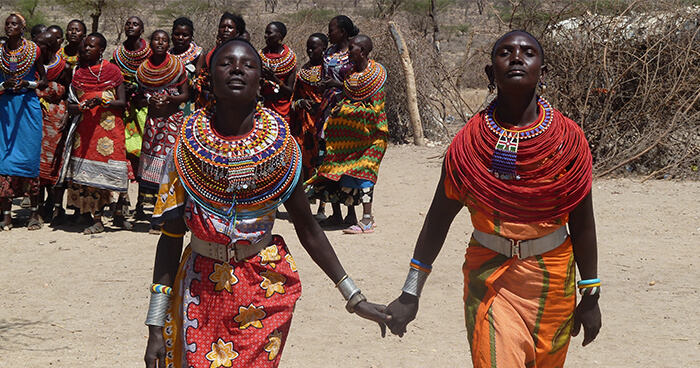 Kenyan tribal dance. Image: John McArthur
There was no acknowledgement of the depression as something invasive and external that could actually be cast out of you again. Instead, they would take people one at a time into these dingy little rooms and have them sit around for an hour or so to talk about bad things that had happened to them. We had to ask them to leave the country.”

Community dance rituals have been used for the good health of indigenous cultures worldwide for thousands of years. Dr Bradford Keeney, cultural anthropologist and author of Bushman Shaman: Awakening the Spirit through Ecstatic Dance, says “a healing context is one where you create a swirling of the life force, an amplification, a movement, a transmission, an energy field so that when another person steps into it, an awakening of their own inner healing sources is encouraged”.

Mending the Soul to Make Us Whole

Shamans and Shamanic practitioners are said to treat illness by mending the soul, restoring the physical body of the individual to balance and wholeness. They can enter supernatural realms to obtain solutions to problems caused by foreign elements afflicting the community. Furthermore, these rituals break down isolation through reconnecting the tribe.

Solomon describes how, in the middle of his own Ndeup experience, he was told to say something that moved him deeply: “Spirits, leave me alone to complete the business of my life and know that I will never forget you”. These tribal rituals recognise that an external aspect can cause mental illness, and that this spirit or unresolved issue causing the illness can be ‘cast out’.

There are many external factors that can bring on depression, such as isolation, poverty and lack of education, limited access to health care or a lack of meaningful activities. These causes are significant to the kind of treatment a patient could receive. Instead of blaming the individual, or expecting them to ‘snap out of it’, we are reminded as a community to examine his/her place in society and to look at what can be done to address the underlying problems. We all have a role in creating a mentally healthy community that supports recovery and social inclusion and reduces stigma and discrimination.

Loved the article. Have felt this on a very deep level. The dances I have done where I can reach esctatic states are similar to Sufi ritual and also the Greek Sertou. I am a whirler in any dance I do. Iam a trauma psychologist and nurse, and healing artist/ dancer. 50 years now. This article is so validating. Wrote about my journey in healing self, culture, nature, and the divine which took 30 years. See christinacampbell.com. published 2003. Received awards. Perhaps you would like to review. Thank you for this article..so appreciated.

Interesting research about tribal wisdom to treat depression. I do believe dance traditions from around the globe offer great body wisdom. I trust that we must absolutely dance to live in balance and harmony in all.

unstructured freeform dance also helps with cognitive disorders because they engage the frontal lobe, which gates the limbic system.

0
Reply
PrevPreviousIs Something Missing from your Spiritual Practice?
NextTransforming Anger into CompassionNext