To My Fellow Climate Scientists: Be Brave, Speak Truth

BY Peter Kalmus
Welcome to UPLIFT
The Science of Love
To My Fellow Climate Scientists: Be Brave, Speak Truth
The Truth That Must No Longer Be Ignored

I’m afraid to publish this article. Why? Because I’m a climate scientist who speaks out about climate change, and in speaking out I may be risking my career. But I do so anyway, out of love — love for my two young sons, for others’ kids, for wild animals, for this beautiful planet. These are infinitely more important than my career, and I see that global warming poses a clear and present danger to them all. The choice to speak out has become easy though, because I no longer see it as a choice. I need to speak out. Knowing what I know, I couldn’t live with myself otherwise. And in this I’m not alone.

At the annual American Geophysical Union meeting in San Francisco last December, I sensed some collective urgency for the first time. As a few of us gathered for a rally on the steps of a nearby church, Kim Cobb, a paleoclimatologist from Georgia Tech who studies corals, gave a call to action. She said:

It has been a very tough year for me personally, having scuba dived on a reef in the far reaches of the tropical Pacific, and watching 85 percent of that reef die between one of my trips and the next in six months… We have for too long, as scientists, rested on the assumption that by providing indisputable facts and great data that we are providing enough, … and obviously that strategy has failed miserably. 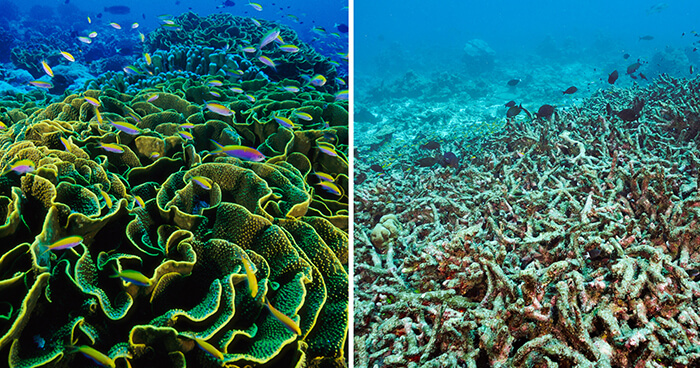 The devastating effects of climate change on coral reefs cannot be ignored.

The Risks that Have Kept Scientists Quiet

But many scientists — myself included — worry that standing up for what we know to be true, or advocating for a particular action in response to anthropogenic change, that we find deeply disturbing, will make us look biased or unprofessional. We’re afraid that if we speak out, we’ll lose our funding or be labeled as politicized or alarmist.

We scientists have a careful, understated culture; we don’t like calling attention to ourselves. We prefer letting our results speak for themselves. As a group, we prefer evidence to politics; we communicate mainly within our ranks and behind paywalls in scientific journals. And when we have something scary to say, we employ the dry, yet precise, language of science.

What Cobb was acknowledging that day, however, was that when climate scientists don’t speak out, we’re inadvertently sending a message that climate change isn’t urgent. If the experts — the scientists on the front lines, the people who know — are so calm, dispassionate, and quiet, how bad can it really be? 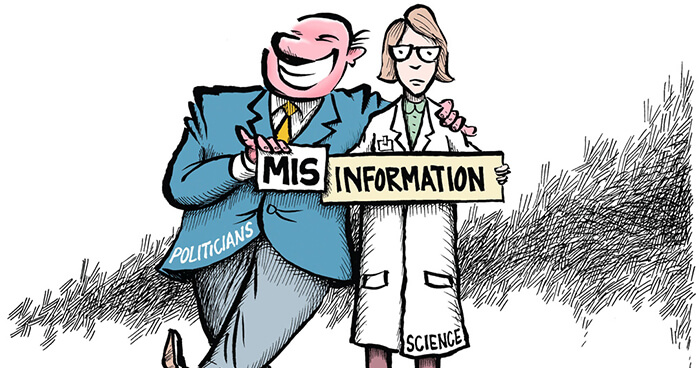 For some, global warming really is an inconvenient truth.

I experience a surreal tension between the terrifying changes unfolding within the Earth system and the Spock-like calm maintained within the scientific community. Following a formal scientific talk about dying forests or disappearing glaciers, for example, audiences commonly ask a few questions on instrumentation or methodology, and then quietly shuffle out.

But after I give a public talk, without fail, someone in the audience will ask, “What can we do?”. It’s a natural question, and it seems irresponsible to reply, “Figure it out yourself” or “That’s up to the policymakers.” I’ve spent more than a decade grappling with that very question. After all, I’m allowed to think about things other than science. I’ve developed informed opinions as to what works for me as an individual and what seems sensible for society (hint: reduce my own emissions and instate a revenue-neutral carbon fee).
[signupbanner]

There are two ways for scientists to speak out.

The first is simply to communicate that ongoing, human-driven changes to the Earth system demand urgent action before things get much worse. This message contains a value judgment, something you’ll almost never see in a formal scientific talk; scientists prefer to stay far away from feelings and value judgments. 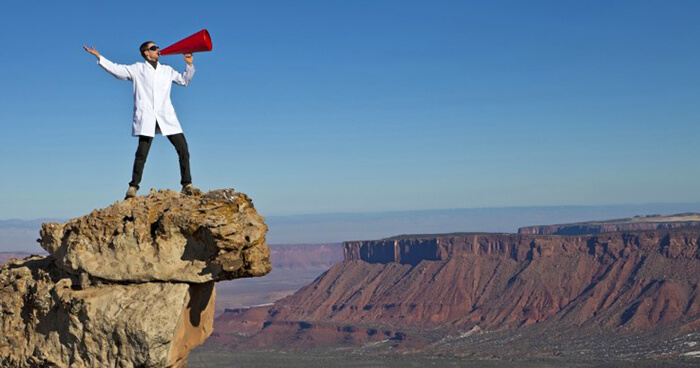 We scientists need to speak out and inform the world of the urgency of climate change.

A second way to speak out is to suggest solutions, which takes us even further out of our scientific comfort zone.

If the public expects scientists to have no opinions about policy, they hold a false expectation.

When I suggest solutions, I make it clear that I’m speaking as a citizen, not a scientist. But if the public expects scientists to have no opinions about policy, they hold a false expectation. Better to recognize that good scientists are capable of keeping those opinions from biasing results. However, offering meaningful solutions is crucial to meaningful communication. As climate scientist, Katharine Hayhoe points out, acceptance of a problem is much higher when an engaging solution is offered.

I recently surveyed 66 earth scientists to see how they felt about speaking up. Half of the respondents said they engage with the public at least twice per year; a quarter engage more than six times per year. Two-thirds said they strongly feel that climate scientists should “warn society that change is needed (without necessarily suggesting a particular policy),” and feel increased respect for peers who speak out. 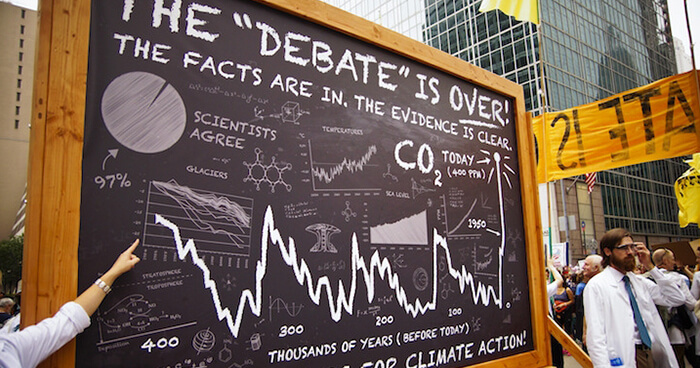 Scientists come together and reveal the evidence in public protest.

But three-quarters said that speaking out is risky; the most commonly cited fear being the loss of credibility. Respondents also feared the loss of peer respect, harassment from trolls, and playing into the narratives of climate deniers.

Michael Mann is intimately familiar with these risks.

Currently a climate scientist at Penn State University, in 1998 he was the lead author of the original ‘hockey stick’ graph that traced global temperature over the past 400 years and showed the alarming extent of recent warming. Mann speaks out regularly. Over the course of his career, he’s faced vilification by politicians, federal subpoenas for personal emails, and research grant audits. He has even received death threats.

So speaking out takes real courage. But now the stakes here are so high that we need to find that courage.

We have a responsibility to tell the whole story. 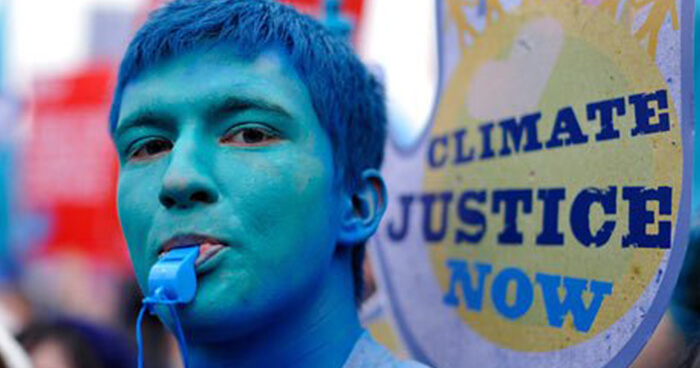 The stakes are high, our planet needs us.

Time to Raise the Alarm

We scientists are the ones who synthesize the laws of physics with observations of the recent past, reconstructions of the distant past, complex computer models, and a spectrum of possible human behavior; and we fold these into possible futures. We’re the ones who stand face to face with the beast on a daily basis. If the future we’re headed toward looks scary, it’s up to us to sound the alarm that a change of course is needed. We’ve stayed on this course too long, and now, frankly, the reality is alarming.

But the public and policymakers simply don’t speak our language, and this is why we need to know when to shed the mantle of scientific authority and speak from the heart. We need to let our emotions shine through; we need to become storytellers. Relaying the science, as beautiful and convincing as it is to us, hasn’t worked. We have a responsibility to tell the whole story.

The real problem here surely isn’t scientists being political — it’s politicians being just plain wrong. Infrared photons and carbon dioxide molecules don’t give a crap about our politics. But with climate deniers sweeping into the White House and the halls of Congress, the stakes just got even higher. For the sake of my kids, I don’t feel that I can afford to wait for our policymakers. It’s a curious situation: You can get in more trouble these days by telling the truth than by telling lies.

It takes a lot chutzpah to entitle such a dishonest graphic “The Truth That Must No Longer Be Ignored.”

The real agendas behind the warming/climate scare scam, which Trump is demolishing?
Vast Depopulation, de-industrialisation, destruction of all nations, one world totalitarian govt of a feudal global society of Lords & serfs:
http://www.c3headlines.com
Click on QUOTES.

Michael Mann is the author of the “Hockey Stick” graph, a fraudulent effort which attempted to wipe out the Medieval Warm Period & the Little Ice Age, 2 historical periods documented in thousands of historical documents, hundreds of peer-reviewed science papers, history books & paintings.
Anyone who cites Mann as an authority is clearly on the wrong path.
Two books I recommend:
1) Ian Plimer’s Heaven and Earth global warming: the missing science. A great read.
2) The Deliberate Corruption of Climate Science, by Dr. Tim Ball.
Clearly shows the UN IPCC as a corrupt political organisation posing as a scientific one.
drtimball.com

If it is science, it is isn’t settled. If it is settled, it isn’t science.
Have a close look at how the consensus studies were conducted. What constitutes agreement? Why are there semantic manipulations?
Look at the 2009 Doran-Zimmerman study. Look at the actual final sample size and more importantly, look at the leading and ambiguous questions.
Then look at Cook et al (2013) 11,944 papers reviewed. Look at how many papers (they claim 64 but on review, it was more like 41) came to a quantified conclusion that humans were the dominant cause of global warming/ climate change. Serious action can only be justified if human CO2 is the dominant cause of injurious global warming/ “climate change.” It has to be quantified with evidence to be even remotely useful. Opinion or worse still, the perception of an opinion is NOT science-it is opinion. Lumping in the coulds , maybes, opinions without actual quantification in to the “positives” group is semantic manipulation bordering on scientific FRAUD.
41 papers out of 11,944. Huge “consensus”- really? How many actual lead authors and peer reviewers does this represent. This must be investigated. It is quite likely to be around 8 actual lead authors and 8 peer reviewers. I will bet there is an overlap of peer reviewers and authors which could well be collusion. If there is a strong suggestion of collusion, perhaps these papers should be excluded-after all, there is supposedly masses of evidence. It is quite possible there are no positively unbiased papers that show human activity is dominant cause of global warming/ climate change.
Time to wake up to the high likelihood that there is a hidden political agenda behind plugging the global warming/ climate change scenario. Do note, if it is so “settled”, why not debate and put the issue to bed? There really has NEVER been a proper debate. To take it on trust with only the illusion of overwhelming agreement is extremely dangerous.

Can some scientist publish an explanation of “peer review” and explain how as science moves forward, and some theories get modified or even disproved. I keep encountering people who think science is some sort of club, where you mustn’t disagree with the concensus.
I often ask why they doubt the science, and what qualifies them to hold an opinion, but l never get any sense. It is “doing my feckin head in” Can’t we just shut them in a box full of CO2?