The Work and Life of Thich Nhat Hanh

Our own life has to be our message. ~ Thich Nhat Hanh

Beloved by hundreds of thousands of people around the world, called ‘an apostle of peace and nonviolence,’ by Martin Luther King Jr, Vietnamese Buddhist monk, Thich Nhat Hanh is one of the most important spiritual teachers on the planet today. His influence as a global religious leader, peace activist and spiritual master has spanned decades since he was ordained as a novice monk at the age of 16. He had an enormous impact on the peace movement of the 1960’s and 70’s and his message of turning within to find peace is still valuable to us all today.

Thich Nhat Hanh has written over 100 books on mindfulness and peace. He has captivated followers with his glowing serenity, warmth, sweet gentle smile, and beautiful teachings. Thay (or master), as he is fondly called by his followers, will be 92 this year and is revered the world over for his powerful message and bestselling writings.

The Birth of ‘Engaged Buddhism’

Born in Vietnam in 1926, he was called to his path at the age of seven when he saw a picture of the Buddha in a magazine. The peaceful, smiling image of the Buddha inspired him, and he wanted to be just like him. He had to wait till he was older to fulfil this longing, finally being ordained as a novice monk nearly ten years later. 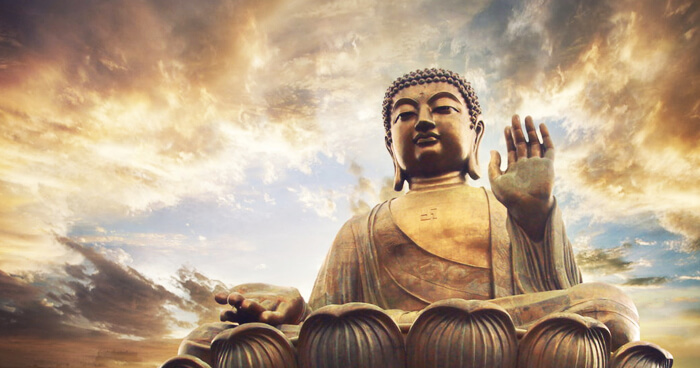 Thay was first drawn to Buddhism when he saw a picture of Buddha at 7 years old.

Even as he chose to be a monk, spending his days in contemplative study and meditation, Thay was faced with a choice when the war came to his doorstep. He could stay in seclusion and prayer, or go out and help the innocent people being affected by the Vietnam War. Of course, his choice was to help those who were suffering, giving birth to what is now known as ‘Engaged Buddhism,’ a movement of peaceful activism for social reform; where peace begins with you.

When bombs begin to fall on people, you cannot stay in the meditation hall all of the time. Meditation is about the awareness of what is going on–not only in your body and in your feelings, but all around you.

He brought these worlds together, joining the secluded devotional life of the monastic with the tumultuous world of samsara. And since then, he has dedicated his life to the work of inner transformation for the benefit of individuals and society. 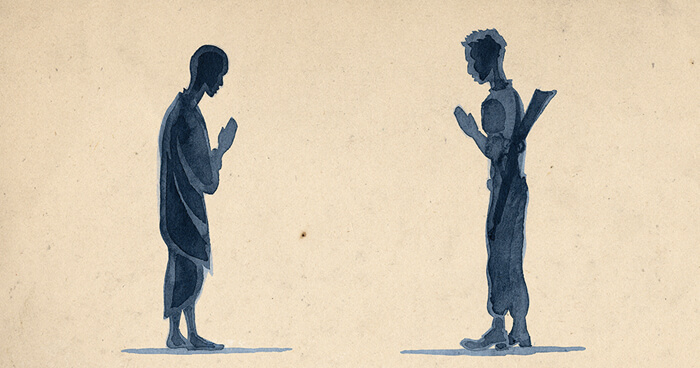 When war broke out, Thay knew he had to put his beliefs into practice.

He courageously opposed his own government during the Vietnam War and helped those around him who were suffering from the bombings and turmoil of war. He founded the School of Youth and Social Service, a grass-roots relief organisation of 10,000 volunteers based on the Buddhist principles of non-violence and compassionate action.

Denouncing the violence inflicted on his countrymen, Nhat Hanh’s relief organisation rebuilt Vietnamese villages that had been bombed, set up schools and medical centres, and resettled homeless families. He also created a publishing house, peace activist magazine and Buddhist University. His activities later led to the Vietnamese government forbidding him to return to his homeland when he left the country on a peace mission, and he was exiled for 39 years.
[signupbanner]
Before being exiled, he travelled to the US to teach Comparative Religion at Princeton University, and then went on to teach Buddhism at Columbia University. It was here that he met with Thomas Merton, the American Catholic writer, mystic and theologian, who was also a poet and social activist. Thich Nhat Hanh met with Martin Luther King Jr in 1966 and asked him to publicly denounce the Vietnam War. King did so the following year and also nominated Hanh for the Nobel Peace prize saying:

I do not personally know of anyone more worthy of [this prize] than this gentle monk from Vietnam. His ideas for peace, if applied, would build a monument to ecumenism, to world brotherhood, to humanity. 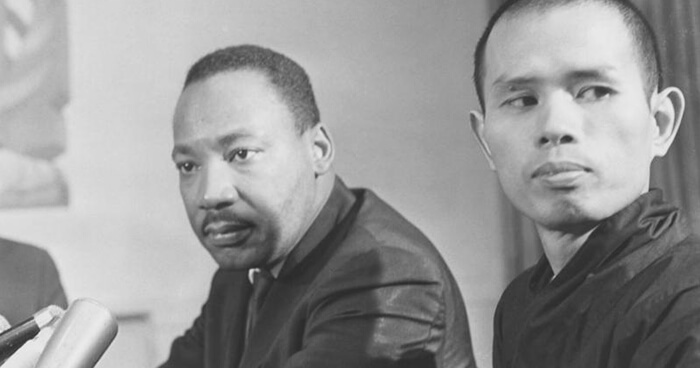 Thich Nhat Hanh’s teachings spread rapidly around the world; his voice like soft rain in the parched wilderness of the madness of global conflict, and so he started to garner quite a following. He moved to France and became the chair of the Vietnamese Buddhist Peace Delegation, later establishing the Order of Interbeing, and then a meditation centre in the south of France. This soon grew into a monastery and Zen Centre, and Plum Village was born; where he still lives today.

Refused entry to his homeland after the Northern Vietnamese army took control of the south in 1975, Thich Nhat Hanh led efforts to help rescue Vietnamese boat people in the Gulf of Siam. He also established monasteries in Vietnam and monasteries and Dharma Centres in the US.

It is not easy to see a terrorist, or the soldier of an invading army, as the same as us. This is precisely why we must try. Compassion is most needed where it is most difficult to give. If the possibility for communication is to exist, we must first communicate with ourselves. We must know ourselves. Not as separate, but as the indivisible whole of humanity. 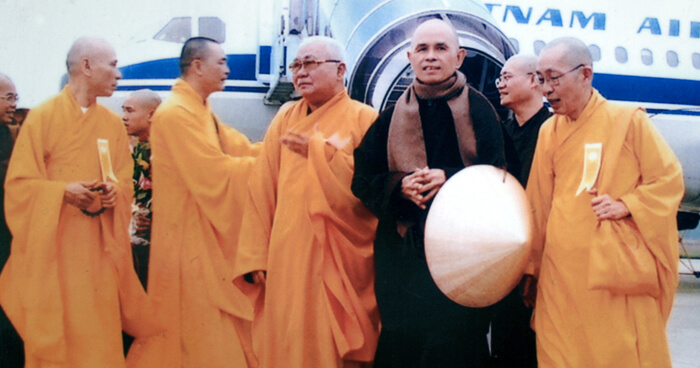 Thay was exiled from Vietnam in 1975.

Remarkably, Thay is fluent in French, Chinese, Sanskrit, Pali, Japanese and English, in addition to his native Vietnamese. And along with his spiritual teachings, he has also written poetry and children’s books.

‘The Father of Mindfulness’

While his life is his most powerful teaching, Thich Nhat Hanh’s key teaching is that, through mindfulness, we can learn to live happily in the present moment —the only way to truly develop peace, both in one’s self and in the world.

He experienced the horror of war in his homeland, and his compassion and love were born out of this deep experience.

Today, the teachings of the Buddha are desperately needed to combat the hatred, violence, and divisiveness in the world and he is always urging us to choose love and compassion – the heartfelt pathway of peace.

When another person makes you suffer, it is because he suffers deeply within himself, and his suffering is spilling over. He does not need punishment; he needs help. That’s the message he is sending. 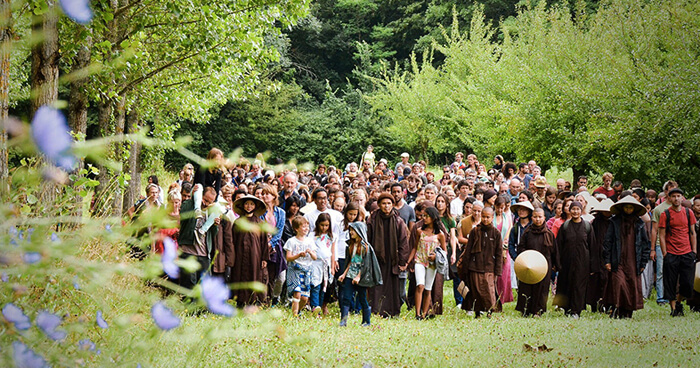 Thay has built a strong following and continues to teach, and reside, in Plum Village.

On his own journey of being exiled from his country, witnessing the horrors of war, and always striving to find the depths of infinite compassion within himself, he is certainly someone who understands – and lives by – the principles of Engaged Buddhism and the highest love in service of all humanity. And his teachings provide a roadmap for each one of us to do the same.

In the past, you may have been animated by the energies of hatred, violence, and blaming, but through the practice of looking deeply, those energies can be gradually transformed into understanding and compassion. Compassion helps us understand others, even those who have caused our suffering. With compassion and loving kindness in us, we suffer much less.

The sweet Vietnamese monk who today lives in Plum Village, his meditation centre in France, is dearly beloved by his own followers and people across the world, who are inspired by his profound teachings.

His extraordinary life is the message. It’s no wonder he’s been called  ‘the other Dalai Lama’, and ‘The Father of Mindfulness.’ If we could all take to heart the teachings of this humble monk, and even live five percent of his wisdom and active service, the world would be an entirely different place. This reminder from the beautiful prayer, written by him, is something we can all choose to live by.

In the garden of my heart, the flowers of peace bloom beautifully.

I attend Deer Park Monastery in southern periodically for the past 20 years. He is my Teacher.

His teaching and talk help me a lot , and cure my suffering that I hold for so long.

And it the prove… my self healing.