The Women of Visionary Art

Visionary Art is becoming one of the most culturally relevant art forms of our time. If you haven’t noticed we are currently experiencing accelerated shifts socially, technologically, and environmentally so it is no surprise that art is reflecting these changes. With these social shifts we are being invited to create something new as we witness the collapse of traditional structures.

Voices from all directions are calling us to return to a balance with feminine energies which are nurturing, cooperative, and compassionate as compared to our war-like and competitive history. We recently explored the science of how Art Changes Consciousness on a biological level in our brains. Let’s now consider the ways that art is shaping and reflecting the emerging culture around us, especially from the point of view of the Women of visionary art.

For me, what’s central to humanity’s strife and the devastation we are wreaking upon our mother Earth, is an imbalance of the masculine and feminine. – Nina Simons, President and Co-Founder of Bioneers,

The feminine re-emerging through visionary art

The Visionary Art scene is very community centered, with a lot of collaboration between artists and cross-pollination of techniques and vision. You can find these artists live painting at festivals and literally watch their genius unfold before your eyes while striking up a conversation with them. Being able to watch the creative process in action always brings me closer to recognizing that all of life is a work in progress.

Jessica Perlstein paints the world that I would like to inhabit some day in the future. Seeing her paintings gives me a blueprint for what I’d like to create in society. Amanda Sage’s paintings are intricate, delicate, expressions of a universe between dreams and reality where feelings abandon their clothes and roam freely through the soul. Autumn Skye Morrison can make even a word-smith become silently absorbed into a reverie while conjuring the intimacy of forgotten beauty.

The Great Eternal Goddess hovers above Elizabeth Banker and whispers colors into her brush as she dreams out loud. Martina Hoffmann’s sublime strokes of eloquence blend nature into a carnivalesque menagerie of veils that exalt one’s deepest yearning for life. Emma Watkinson brings an ancient future into a contemporary balance between opposing expressions of now. There is an endless universe of delight waiting for anyone who dares to explore this wondrous world of art and artists.

What is the role of the feminine in art and culture?

Understanding masculine and feminine as energies that are expressed in the world beyond gender attributes is important. A man can be in balance with his feminine side while still being masculine, and the same is true for a woman. In order to get a a woman’s perspective of how these attributes express themselves in art and culture I asked Liana Sanada who is an art curator and gallerist at Sananda Gallery in Los Angeles.

Visionary art is filled with femininity: soft tones, morphing lines, and ethereal depths. Often, the subject of visionary art includes the form of the goddess. It is a receptive style that has a strong emphasis on beauty. Our modern world is defined by hard edges, straight lines, and strict rules. Order, strength, and power are elements of masculinity. Within each of us we contain both masculine and feminine energy. We have built a society with many masculine features: hard concrete, phallic buildings, wars of aggression; where assertiveness and business are celebrated, and the logic brain rules. Generally speaking, we have empowered the masculine energy within us all and allowed this field to determine the direction in which the physical and social realities have been constructed. We have silenced our inner female energy, minimizing the importance of the attributes of Woman. It is my understanding that the world as we know it will dramatically shift the moment we start deeply listening to the inner voice of Women, embracing the soft and receptive, and trusting our intuition. The rise of visionary art is evidence of a shift that many are making into a more balanced expression of both masculine and feminine energy.
– Liana Sananda 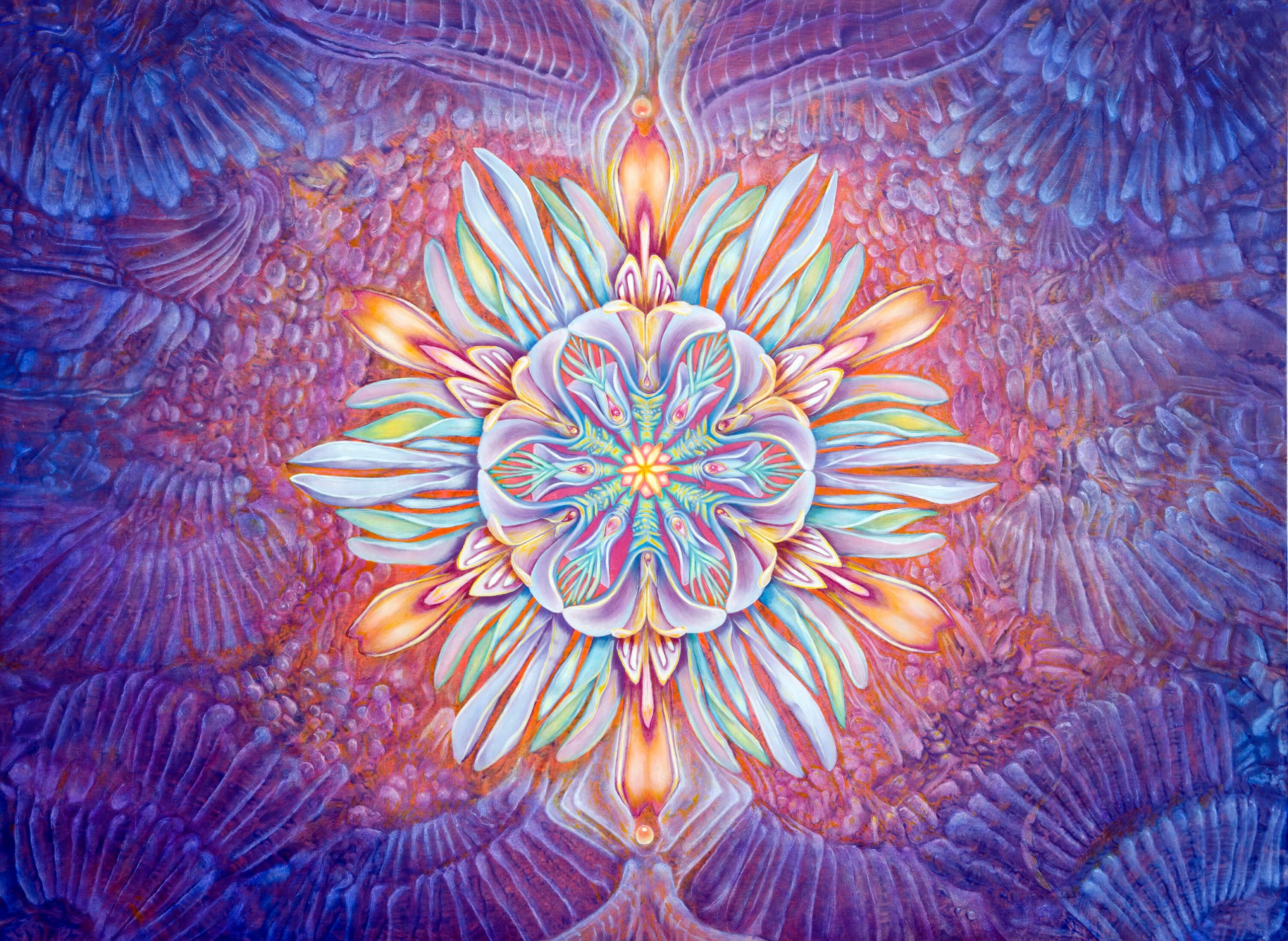 The gender imbalance in art is a reflection of global inequality

Artist Ashely Foreman recently wrote an article entitled Inspired Contemporary Art by Women. The blog contains over 120 inspired pieces of art by women in a virtual gallery tour of exalted work that has been largely un-noticed. While I browsed through the images I could feel my mirror neurons absorbing and reflecting a sensual, healing feminine vibration that altered my consciousness. Art could be a fundamental way to correct the imbalance that Nina and Liana speak of above, but the art world has tended to cater to male artists.

Fierce Women of Art by PBS

Historically, too few women artists were able to attain any level of mastery because lack of access to learn, cultural disapproval during their time period, or the challenge of balancing obligations as mothers and various other gender roles. While some of this still echoes from the past, it is indeed the past! – Ashely Foreman

Many others are determined to bring attention to this imbalance through theatrics and activism. In 1984 only 13 out of 169 artists featured at The Museum of Modern Art in New York exhibit entitled An International Survey of Painting and Sculpture were women. This despite the fact that it was supposed to be an up-to-the minute summary of the most significant contemporary art in the world.

Guerrilla Girls is an anonymous group that formed as a response to the 1984 exhibit and has continued ever since, appearing at over 90 universities and museums. However, despite their efforts – and the efforts of many others – the gender statistics continue to be discouraging.

Beyond the canvas: invoking feminine power in the world

Art, culture, and consciousness shape each other and influence each other in a symbiotic relationship. Our brains respond to the stimuli that we feed ourselves, including everything from art, music and media, to conversations with friends.

A walk in nature, yoga, or a meditation practice may also allow you to release stress and melt into a receptive, nurturing state of mind. Witness the ebb and flow between internal states and external realities, by modifying your internal state you can effect change in the world around you.

There is a mystical quality to Visionary Art that encourages us to be open to that process of insight and transformation. By witnessing the depth of meaning hidden within these works, we give ourselves the opportunity to absorb the feminine qualities that lie at the heart of the art and the artists themselves. 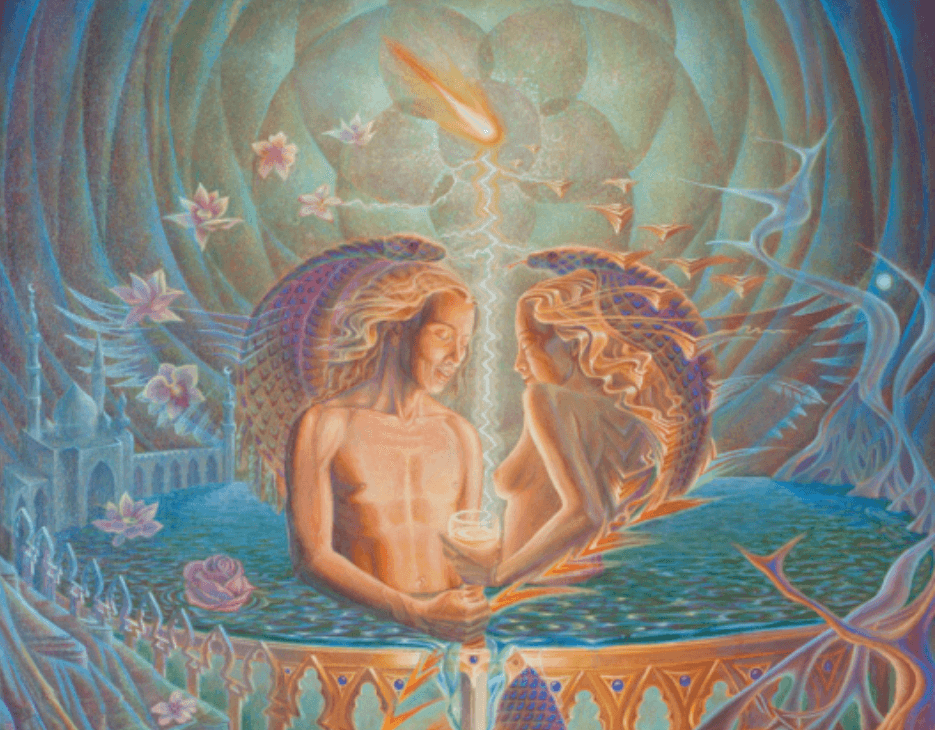 “The Magi’s Grail” by Emma Watkinson

Art is a reflection of, but also shapes the way that we see the world around us. The more we learn to embody the feminine power that we witness in Visionary Art, the more we give those qualities of gentleness, compassion and love a chance to become manifest through our thoughts and actions.

It looks like the great divide between northern and southern California extends to the art world. California Visionary Art started in San Francisco in the late 1960’s. But, searching the web under California Visionary Art calls up southern California artists almost exclusively. Most of the pioneers of that movement are now deceased, and if they are still living have moved out of the city because of the cost of living here.The prime movers of the movement are seldom mentioned; Nick Hyde, Clayton Anderson, Gage Taylor, Bill Martin, etc. There were and remain a number of women artists in the CVA movement from northern California who produced many seminal works who continue to produce art, and they are worthy of recognition. To name a few; Susan Boulet, Lois Anderson, Susan St. Thomas, Margaret A. Daley, Sheila Rose, Josie Grant, Bonnie Bixby, Uriel Dana, and others. Many have websites. Please check them out and give them a much deserved shout out. The genre is incomplete without them.

The power of visionary art is infinite and limitless. The creative possibilities when creating art are also endless. Whenever I’m creating visionary art, my imagination is totally open and in full swing. Sometimes, I feel like I will never finish a piece because the visions and ideas just keep coming. Take a second and check out some of my visionary art https://awakeningvisions.com

What an inspiring article! I wish I could paint! Yesterday I stumbled across VANA (The Visionary Art Network Australia ) There are quite a few films on there about visionary art & artists (not just Australian) I think the founder is actually South African. Interesting stuff.

What a great start! Thank you. May I strongly recommend Penny Slinger. She started in England in the 1960’s and was on the forefront of the fully expressed female movement. Over the decades, her continued mastery of her artistry has expanded and spans several media ~ as the options for expression have evolved. I believe she has recently enjoyed one woman shows in Japan, New York, London ~ as a revived interest in her life’s homage to the Divine Feminine continues. But please fact check the “one woman” part? She currently lives in the Santa Cruz Mountains in California.

How wonderful to see the work of some of my former teachers and classmates at the Vienna Academy of Visionary Art featured here. Beautiful article.