BY Mark Heley
Welcome to UPLIFT
Discovering Love
The Whole World Needs Healing
Why does our empathy seem to have limits? Why can't we extend our compassion to the whole world?

Amongst the huge response to the Paris Attacks, there was also a significant response to the response. In between the wall-to-wall media coverage and genuine grief and shock that was being expressed by millions of people online, there were also a number of people wondering why we are so shocked when something so appalling happens in the heart of a Western City, but we seem less concerned when that terrible loss of life and damage happens somewhere else in the world.

Along with Paris, many people were wondering why Beirut, which suffered devastating double suicide bomb attacks that happened there just the day before received just passing notice in many Western news and media channels. What is it about our Selective Outrage that is so concerning?

While it is perfectly natural to react more strongly when the victims of a tragedy are either known to us personally, or that tragedy happens in proximity to us, there does seem to be definite and perceptible cut-off point in empathy when those same tragedies happen to people who are farther away, or we happen to see as ‘different.’ 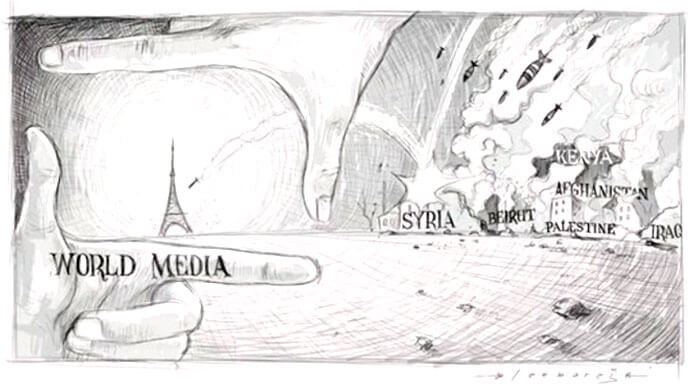 A Plan to Polarise the World

Addressing this failure of empathy seems to be one of the most important issues arising from the widening spread of terrorism and conflict that we seem to be seeing in this present time. It is particularly important because we are seeing an increasing tendency amongst some political leaders and many frightened people around the world to call for greater separation, for new walls, new laws, new powers of surveillance and policing and more and more military might.

And ironically, this is EXACTLY what Daesh (also known as ISIL/ISIS) wants to happen. We know because they told us so. It’s actually a policy goal and the justification they use in employing such grotesque and inhumane tactics in their killing.

What they want is to remove the ‘grey zone’ between the West and the Muslim world. Daesh want to marginalise Muslims living in the West and force them to choose between their twisted interpretation of Jihad and the countries they live in. And they want to radicalise Westerners by getting them to call for greater and greater attacks on Syria and Iraq and Daesh’s bases there, thereby erasing the ‘grey zone’ and polarising the world into two. 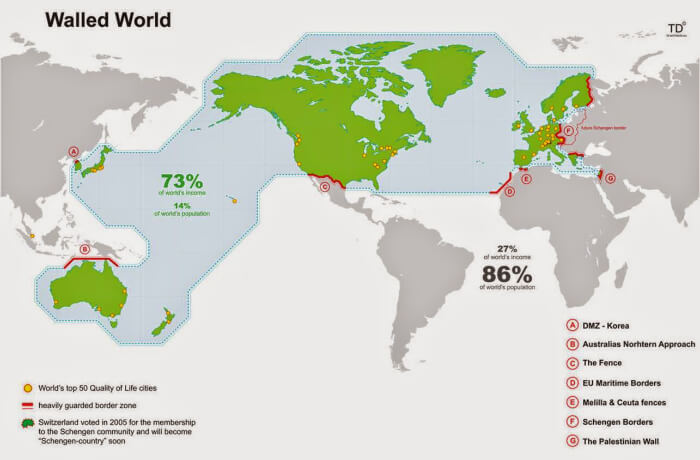 In the twisted ideology of Daesh, these two camps are the ‘Crusader’ civilisation of the ‘Kuffar’ (disbelievers) pitted against the ‘Islamic’ state of Daesh. In actuality, the ‘two camps’ appear to be something quite different. They are not West vs. East, or North vs. South, Christianity vs. Islam, or even Developed vs. Developing countries. The actual geopolitical reality of the situation seems to boil down to ‘The Walled World’ and the ‘The Rest’. The graphic above, although outdated, shows exactly why.

14% of the world’s population lives in the protected zone, but has 73% of the income. 86% of the population live outside the zone, with just 27% of the income.  Although the reality for many of those people is even starker as the wealth disparity in those ‘unprotected’ countries means that most actually live in poverty. The borders between the ‘Walled World’ and ‘The Rest’ are exactly where we have seen the refugee crises emerge, as you would expect as catastrophe outside the Walled World compels those outside to try and get in.

The ‘Walled World’ also has 75% of the military weapons (a trillion dollars a year global business) which are manufactured by wealthy “protected” nations, while more than 95% of deaths from these weapons have been in unprotected nations.

From the point of view of the Walled World, Daesh and Donald Trump are very much on the same side: the side of separation. The side that clamors for more walls to keep out the ‘other’. Whether from ideology, ignorance, or just plain hatred of what they do not know, the side of separation looks for solutions by making the world a smaller, less diverse place that seems to be under control.

The Walled World of Donald Trump

It appeals to the default neurological patterning of humans re-enforced by the oxytocin pathways in the brain, which leads people to see ‘their’ tribal members as more important, more human and more real than those who are distant from them. The problem with this, is that we no longer live in a tribal society where space and distance separates different cultures, we (whether we like it or not) live in a global village that is interconnected, interdependent and becoming increasingly so.

Instead of tribal empathy and selective outrage, somehow we must rise to the challenge of moving into planetary empathy and universal compassion. So how exactly can we do this?
[signupbanner]

Moving beyond the World of Separation

Otto Scharmer, a Senior Lecturer at MIT, the Massachusetts Institute of Technology, and Co-founder of the Presencing Institute, has been looking at the issue of moving beyond the ‘Walled World’ reality. If we cannot control the ‘stream of disruptions’ as Otto Scharmer puts it, from terrorist attacks, climate disruption, financial instability and the social consequences of extreme wealth polarisation, what can we control? He believes that we can control our response to these events. In doing so, Scharmer has identified three essential options:

‘Let’s build a huge wall that separates “us” from the “them.” Let’s practice the values of freedom, equality, and solidarity inside these walls, and let’s do the opposite outside of them.’

‘Acknowledge our own role in generating the problem, and therefore our responsibility to co-create a solution.’ 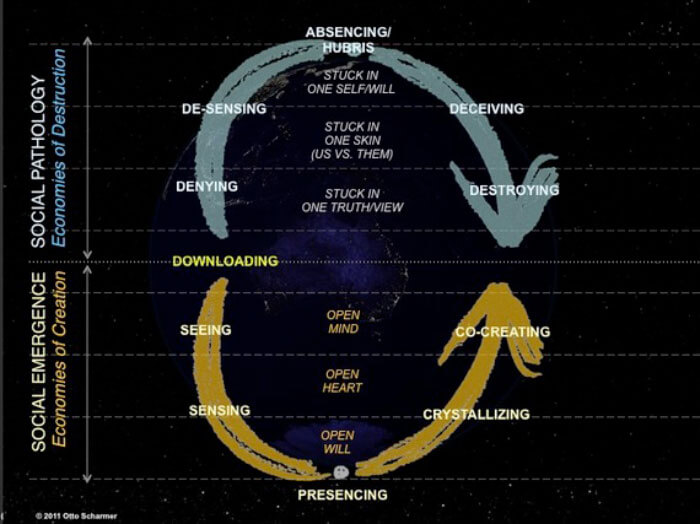 At the heart of this conflict according to Scharmer are two ‘clashing mindsets’. One shaped by the field of ‘Absencing’: that is, the field of “building up walls”, by enacting a social architecture of separation. The other by ‘Presencing’: that is, the capacity of co-sensing and co-shaping the future by enacting a social architecture of connection.

Here is a video from the MIT online course ‘Transforming Business, Society, and Self’ where Scharmer explains this in detail:

Transforming Business, Society, and Self with Otto Scharmer

It is crucial to see that the conflict we are currently in is not just one of terrorism, resource exploitation and climate change, but a combination of all of these elements across all levels of all systems.  According to system theorist Thomas Homer-Dixon in the book The Upside of Down: Catastrophe, Creativity and the Renewal of Civilization, the global conflict we are currently experiencing can be a precursor to revitalization.

However, this requires fundamental shift in worldview to break out of the current paradigm of Absencing, to create a new system from the perspective of Presencing. We don’t have to wait for someone else to do this. The shift can begin within each person, and then spread out to communities, nation states, and then the world, or as Scharmer puts it ‘the one shift that now matters most is the shift of the heart.’

The question however, arises, how will we deal with ISIS and Donald Trump? The answer according to Benjamin Barber, author of Jihad vs. McWorld is to open a ‘Second Front’, while the ‘First Front’ is the expanding shockwave of intra-governmental and intra-ideological conflict. The Second Front is a citizen-led initiative that relocates the point of leverage and action to individual people and communities.

The second front … engages every citizen with a stake in democracy and social justice, both within nation-states and in the relations between them. It transforms anxious and passive spectators into resolute and engaged participants… 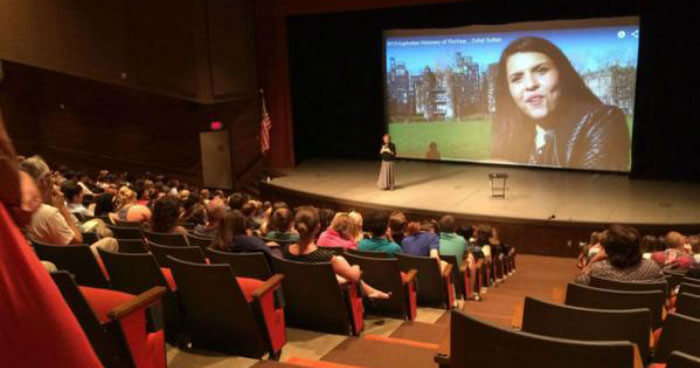 An amazing example of what this looks like in action is given by the Euphrates Institute, who recently honored Zuhal Sultan, founder and director of the National Youth Orchestra of Iraq, as 2015 Visionary of the Year. Starting the orchestra when she was just 17, Zuhal brought together young people from every religion and ethnic group in Iraq to build bridges through music.

The orchestra members overcame incredible obstacles of war, violence, and lack of resources to perform successfully throughout Europe and Iraq, giving people a symbol of hope and accomplishing what no Iraqi politician has been able to do—unite the disparate groups of an Iraq that threatens to splinter apart. The Euphrates Institute was founded by Janessa Gans Wilder who worked on a special CIA assignment in Iraq for nearly two years, but left the CIA in 2005 so that she could pursue counterterrorism work from an entirely different angle.

What Janessa Gans Wilder now sees as the most effective way forward to counteract terrorism is  by creating inter-community cells that harmonize. This is exactly the opposite of what Daesh are doing with terror cells.

The solution to conflict and bombing is not more conflict and bombing. The solution is to create a culture of peace. The National Youth Orchestra of Iraq is just once example of what that might look like. If we can stay open and present, instead of shutting down and ‘absencing’, a new possibility can emerge. Not just of the healing of a few, or peace for the privileged, but the beginning of healing for the whole world.

There are no other solutions left. We live in radical times and our answer to conflict must be to move together, not apart. We must aim to reclaim the world in its entirety from those who would build walls of separation. We the people might not have military might, but we do not need any weapons, this a battle that will be fought and won one heart at a time.

Truly beautiful and amazing work. Thanks for this.

I am so glad to have the Baha’i Faith, for it is truly striving to be harmony cells. I pray that the people of the world come together in unity of being and in religion. That we learn how to truly consult to solve global problems. That men and women are equal, that all people are of the same value (we are made from the same dust), that there needs to be equity and justice, accountability and transparency.

The fact that the event in Paris was all pervasive in the media was no accident. The cabal uses terrorist attacks to ramp up security and surveillance here and give themselves an excuse to declare a perpetual war. They use the media and news outlets to get you scared so you’ll go along with their plan.

Wonderful article, but I couldn’t help noting that the preamble to opening the “second front” is “how will we deal with ISIS and Donald Trump”? What happened to not polarizing and choosing presencing over absencing? I don’t mean to imply that this wonderful article is dancing dangerously with falling into Option1: “Muddling Through -Basically same old, same old. More meetings. More declarations. More empty words.”

But perhaps if we’re to make the quantum leap to Option 3: “Moving together -‘Acknowledge our own role in generating the problem, and therefore our responsibility to co-create a solution.’”, we cannot afford to expeditiously employ Option 2 thinking: Moving Apart – “Let’s build a huge wall that separates “us” from the “them.”

Perhaps we must first acknowledge the ISIS and Donald Trump within ourselves? And learn to carefully integrate that HORROR SHOW, the Trump and ISIS deep within ourselves, in a supportive, nourishing, loving environment. Jung used to ramble on about this a lot. Maybe it is from this point where genuine, authentic, inspiring and sustainable action springs.