The Unpublished Musings of Bruce Lee

You will never get any more out of life than you expect. — Bruce Lee

Although Bruce Lee is best known for his legendary legacy in martial arts and film, he was also one of the most underappreciated philosophers of the twentieth century, instrumental in introducing Eastern traditions to Western audiences.

A philosophy major in college, he fused ancient ideas with his own singular ethos informed by the intersection of physical and psychological discipline, the most famous manifestation of which is his water metaphor for resilience.

Early in his career, Lee was systematically sidelined by Hollywood’s studio system, which operated with extreme racial bias and still used white actors to portray stereotypical Asian characters. Over and over, Lee was told in no uncertain terms that white audiences simply wouldn’t accept an Asian man as a lead character in a movie. 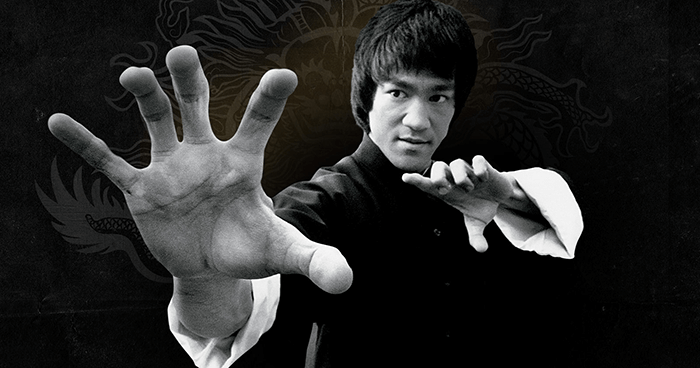 Even when he finally broke through and was cast as a lead, the studios continued to treat him as a brainless robot, there to entertain with his kung-fu skills.

When they tried to cut all the philosophy out of Enter the Dragon because they wanted a vacantly entertaining action movie, Lee refused to go on set for two weeks, insisting that the kung-fu and the philosophy were inextricably entwined, each the vehicle for the other.

Hollywood eventually had to relent and it was precisely the philosophical dimension that rendered the movie — just before the release of which Lee met his untimely death in 1973 — a cultural icon and a beacon of racial empowerment associated with the Black Power movement, later acquired by the Library of Congress as a “culturally, historically, or aesthetically significant” artifact. 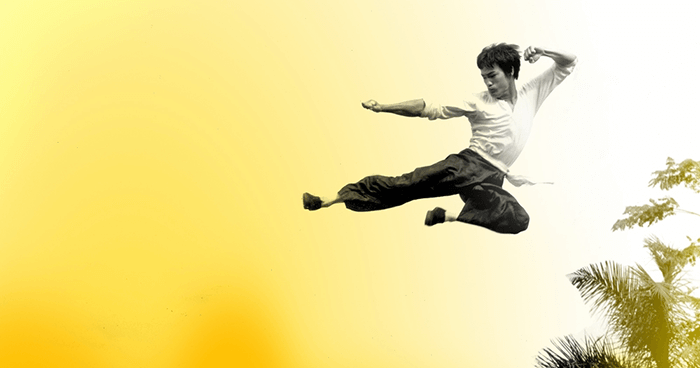 Lee stood his ground for ancient philosophy amongst the glamour of Hollywood.

Lee saw philosophy as inseparable from everyday life, just as he saw the mind as inseparable from the body, each end of the battery constantly charging the other. He recorded his rigorous workout routine alongside his philosophical meditations, which he fleshed out in the course of living.

Even his handwriting, meticulously neat and measured to fit the tiny page, radiates Lee’s formidable discipline and orderliness.

Like Oliver Sacks, who carried a notebook everywhere, Lee always had a tiny 2×3″ pocketbook with him, which he filled with everything from training regimens to the phone numbers of his pupils (who included trainees like Chuck Norris and Steve McQueen), to poems, affirmations, and philosophical reflections. Even his handwriting, meticulously neat and measured to fit the tiny page, radiates Lee’s formidable discipline and orderliness. 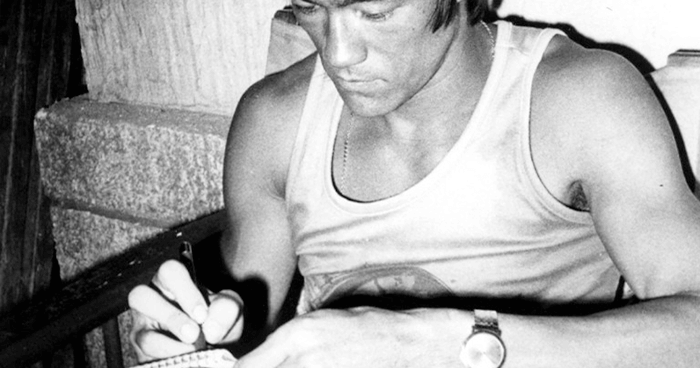 Lee carried a notebook with him everywhere to write down his daily musings.

But perhaps the most notable portion of his pocketbooks — or day timers, as they were called — were his affirmations, reminiscent of the rules of conduct Nobel laureate André Gide penned in his youthful journal, and of artist Eugène Delacroix’s diaristic self-counsel.

In these notes to himself, Lee articulated his personal philosophies aimed concretely at his own growth, but resonating with universally applicable insight into our common psychology, behavior, and human nature. 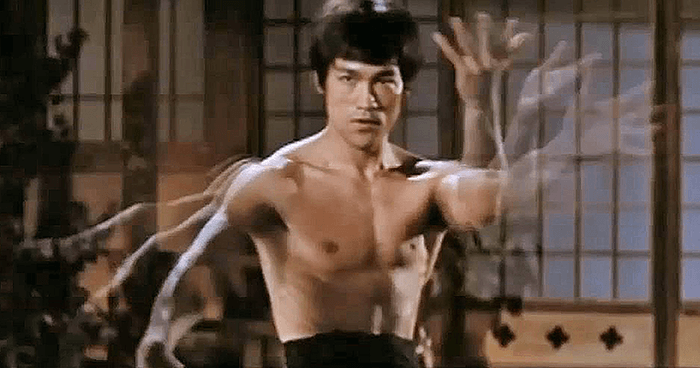 Discipline was a large part of Lee’s thoughts on personal growth.

With special permission from the Bruce Lee estate, here is an exclusive look at several pages from his 1968 pocketbook, penned shortly before Lee’s twenty-eighth birthday, each transcribed below, beginning with Napoleon Hill’s “Daily Success Creed”, which Lee copied into his notebooks:

Recognizing that the power of will is the supreme court over all other departments of my mind, I will exercise it daily, when I need the urge to action for any purpose; and I will form HABIT designed to bring the power of my will into action at least once daily.

Realizing that my emotions are both POSITIVE and negative I will form daily HABITS which will encourage the development of the POSITIVE EMOTIONS, and aid me in converting the negative emotions into some form of useful action. 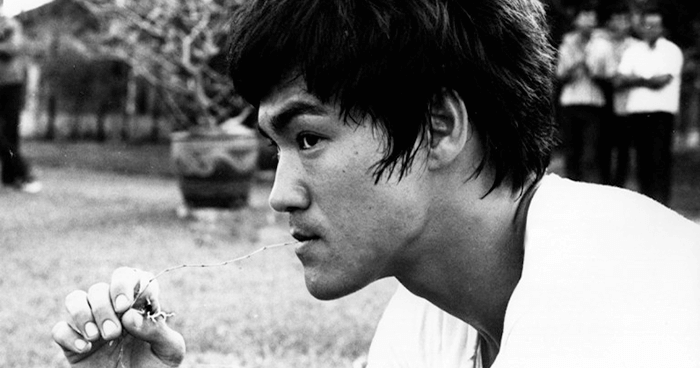 The pocketbooks reveal the depth of Lee’s philosophical musings.

Recognizing that both my positive and negative emotions may be dangerous if they are not controlled and guided to desirable ends, I will submit all my desires, aims and purposes to my faculties of reason, and I will be guided by it in giving expression to these.

Recognizing the need for sound PLANS and IDEAS for the attainment of my desires, I will develop my imagination by calling upon it daily for help in the formation of my plans.

Recognizing the value of an alert memory, I will encourage mine to become alert by taking care to impress it clearly with all thoughts I wish to recall, and by associating those thoughts with related subjects which I may call to mind frequently. 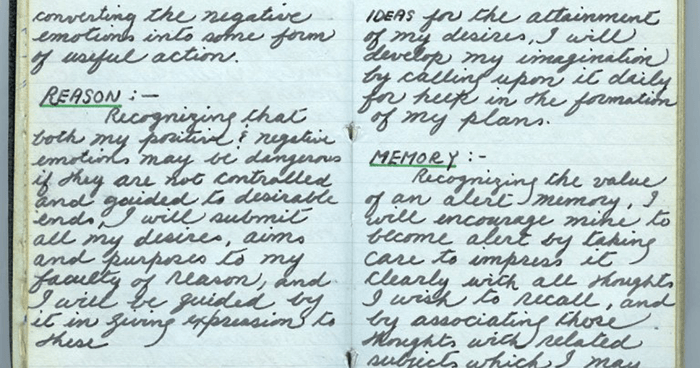 A page from Bruce Lee’s 1968 pocketbook.

Recognizing the influence of my subconscious mind over my power of will, I shall take care to submit to it a clear and definite picture of my CLEAR PURPOSE in life and all minor purposes leading to my major purpose, and I shall keep this picture CONSTANTLY BEFORE my subconscious mind by REPEATING IT DAILY.

Recognizing that my emotions often err in their over-enthusiasm, and my faculty of reason often is without the warmth of feeling that is necessary to enable me to combine justice with mercy in my judgments, I will encourage my conscience to guide me as to what is right and what is wrong, but I will never set aside the verdicts it renders, no matter what may be the cost of carrying them out. 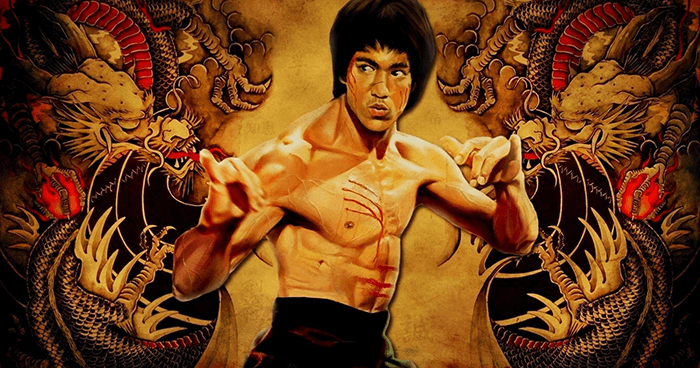 These private musings combine the philosophies of the East and West.

When Lee felt that he had arrived at a particularly significant idea, he wrote it on the unlined back of a plain 3×5″ lined yellow notecard, which he signed, almost like a will or perhaps a contract with himself. He would often refine or copy reflections first recorded in his pocketbook onto the notecards reserved for only his firmest convictions and deepest dedications.

What makes the affirmations especially notable is that they fuse ancient philosophical and spiritual traditions (particularly Zen Buddhism’s ideas about character, the self, and the ego), questionable New Age magical thinking, and habits of mind which contemporary psychology has since proven fruitful — a reminder that our personhood is a mashup of our era and our culture, with all their inherent knowledges and ignorances, and it is the way we combine the elements at our disposal that makes us who we are. 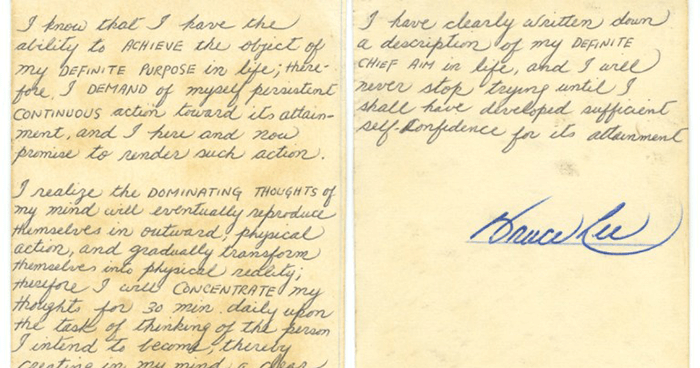 Lee wrote is most significant findings on notecards that he signed with his name.

You will never get any more out of life than you expect.

Keep your mind on the things you want and off those you don’t.

Things live by moving and gain strength as they go.

Be a calm beholder of what is happening around you.

There is a difference a) the world b) our reaction to it.

Be aware of our conditioning! Drop and dissolve inner blockage.

Inner to outer – we start by dissolving our attitude not by altering outer condition.

See that there is no one to fight, only an illusion to see through.

No one can hurt you unless you allow him to.

Inwardly, psychologically, be a nobody. 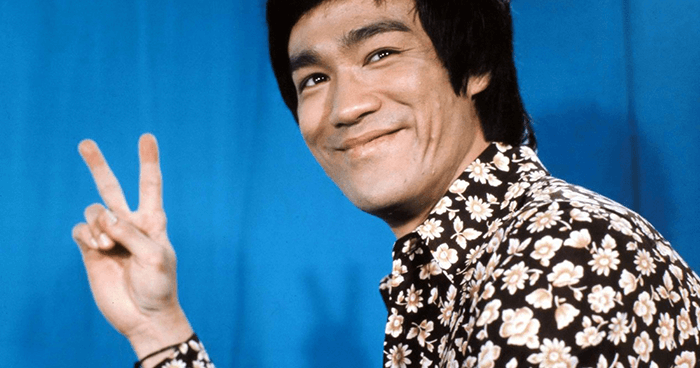 The writings show us how to cultivate our truest selves and live in harmony.

I know that I have the ability to ACHIEVE the object of my DEFINITE PURPOSE in life; therefore I DEMAND of myself persistent, continuous action toward its attainment, and I here and now promise to render such action.

I realize the DOMINATING THOUGHTS of my mind will eventually reproduce themselves in outward, physical action, and gradually transform themselves into physical reality; therefore I will CONCENTRATE my thoughts for 30 min. daily upon the task of thinking of the person I intend to become, thereby creating in my mind a clear MENTAL PICTURE. 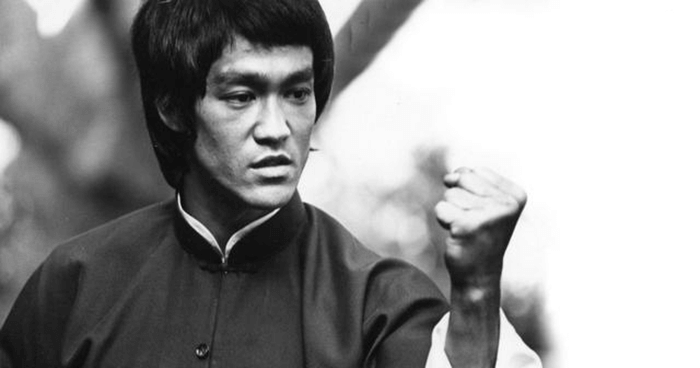 “Always be yourself, express yourself, have faith in yourself.” – Bruce Lee

I know through the principle of autosuggestion, any desire that I PERSISTENTLY hold will eventually seek expression through some practical means of attaining the object back of it; therefore, I will devote 10 min. daily to DEMANDING of myself the development of SELF-CONFIDENCE.

I have clearly written down a description of my DEFINITE CHIEF AIM in life, and I will never stop trying until I shall have developed sufficient self-confidence for its attainment.

he will never be forgotten…but it is always good to see some of what he believed in, and what drove him to do what he did…and in the lives of many still does.
Bruce has been gone for well over 40 years, and people are still trying to use him, that is part of the reason why he left here so soon in his life because of people trying to use him.
but it is all good..

It does really sound like think and grow rich by napoleon hill. My favorite book

It sounds ok, but seems like he was putting way too much pressure on himself. Both phisically and mentally

Unknowingly i am practicing number of “things” as has been said in this artical, and all works and now i came to know why i am like this.

Thanks for publishing the unpublished. Krishnamurti had a lot of influence on Bruce Lee. He read and was very inspired by Krishnamurti philosophy on truth and self-reliance. And both shared the same human ideal and aim: to be absolutely, unconditionally free.

Will and determination are mighty engines for life accomplishments

Wonderful approach to life and goals.

Simple truths to live by.. wisdom and practice merged together equals power and happiness.