The Transformative Power of Play

BY Chip Richards
Welcome to UPLIFT
Stories of Love
The Transformative Power of Play
Are Games the Solution to Our Planet’s Greatest Challenges?

During the first several years of my son Josh’s life, he had a passion for ball sports and sword fights. He used to barge into my office intermittently throughout the day, usually dressed in the full regalia of his chosen theme for the day (from Michael Jordan to Jack Sparrow) and beckon me to abandon whatever I was doing for a game or adventure. Though I would often resist in order to finish my ‘important work’, he would eventually wear me down and before I knew it we’d be out in the grass immersed in a moment of pure play together. I began to notice that two things would happen consistently… Firstly, the sense of urgency around whatever serious work needed to be done would almost always dissolve, leaving me with a sense of spaciousness and fresh energy to enjoy the game and whatever happened after… and secondly, often within moments of letting go of my serious work challenge in order to play catch or battle for treasure, a previously unseen idea or solution to whatever I was working on would spontaneously bubble up into my consciousness. The act of playing was not only wonderfully worth it for its own sake, it seemed to open up aspects and creative capacities within myself (and Josh!) that flowed powerfully into other areas of life.

In our modern world where “putting our game face on” often means getting more serious about an issue, the co-founder of the Elos Foundation, Edgard Gouveia Júnior has won international attention for his unique approach to the power of play as a vehicle for profound social, community and planetary change – through such initiatives as the Warriors Without Weapons program, Oasis Games and Play The Call. 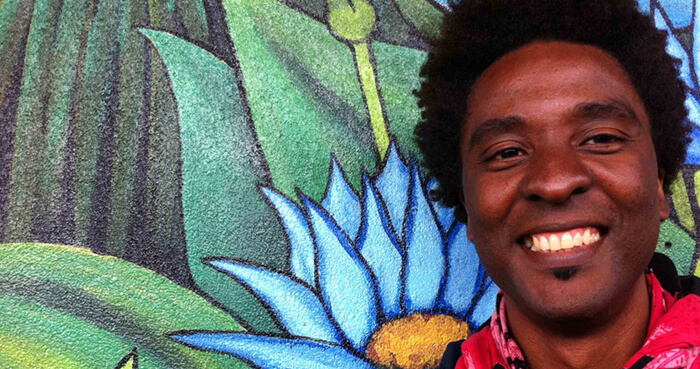 In a recent conversation with UPLIFT, Edgard shared a glimpse into the challenges he faced as a child growing up in a world out of balance, and the path of possibility that opened as he discovered the gift of play as a doorway to making people shine.

I was a very sensitive kid and when I used to see sad things – like visuals of kids in Africa or Brazil who were facing hunger and real poverty – I used to cry a lot. So much that my family would literally jump in front of the TV to protect me from seeing footage like this. One day, they were distracted and didn’t realise that I was watching a whole documentary about the Holocaust in Germany. I cried for hours and after this I became very suspicious of humanity. I couldn’t understand how we could let this happen. Even more than the acts themselves, I couldn’t understand why other people wouldn’t stand up and stop those situations from happening.

Edgard shares how he began to see many situations like this on a small scale in day-to-day life around him where he grew up in Brazil. Kids living on the street, homeless people and servant workers being poorly treated. But simultaneously he started to have experiences of seeing “the amazing side of humanity” as well. ‘I remember the first time I sat on the ground and spoke to a homeless man and I realized “homeless” was just a label. Here was an amazing man with such beautiful stories. I began to become attracted to other moments where even when you don’t expect it, humanity is amazing.’

I discovered a lot about asking questions and listening. I noticed that when I asked people to tell me about the most amazing story from their childhood, or the most incredible people they’d met… when people start sharing like that, they shine. People can be sad or very troubled and with just a few questions something different begins to show up. This saved my life: To discover that humanity was not dangerous as long as I could make them shine. People shining I was not afraid of. 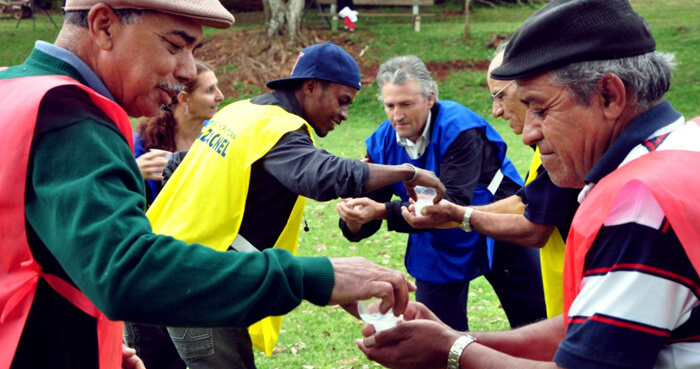 Making a Game from Impossible Missions

Around this time (age nine), Edgard had his first experience of Gincana – a traditional Brazilian collective game, in which people in a community are divided into groups that compete across a village or town, with challenging tasks to find specific objects or information and express themselves collectively as a group.

Gincana is a special game because it’s based around naïve, impossible missions. For example you have teams of 4-500 people, all through the town gathered in the big square and the game leader goes to the stage and says, “OK. You have three hours to bring me a real pink elephant.” There are no elephants in Brazil. There are no pink elephants anywhere. But the people don’t care. They have to find a collective way to find one. People try everything they can think of and maybe finally someone finds a circus that has an elephant and they convince the owner to bring the elephant. Others find paint or pink flowers to cover the elephant and after three hours the pink elephant is there in the square. The Gincana is all about drawing forth the creative entrepreneurship of an entire town to solve impossible missions. When I saw that for the first time as a kid, and I knew I had found a real solution to the problems I was fearing. 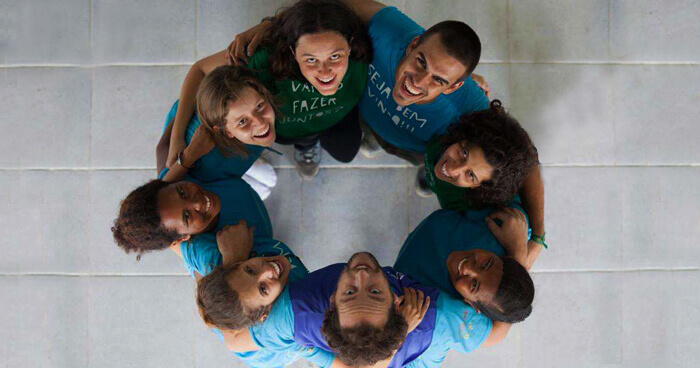 When We Play, Our Best Self Emerges

The truth is we love impossible missions. We love to play and make magic happen. If we are playing together we can do impossible things, in impossible time and create the most amazing results. What I could see very early is that when we are playing, the best version of ourselves is there. The joy, collaboration, connection. And suddenly our surface differences don’t matter. You’re on my team and we have an impossible mission… So let’s do it!

Translating the Power of Play into Positive Real-World Action

In university, Edgard and his friends began challenging themselves to push the boundaries of play into new arenas – which lead them into slums, indigenous communities and other places where people were facing big challenges and they started using games to help discover previously unseen solutions and pathways to realize community dreams.

We might enter the heart of the slums of Brazil and say, “We have three days to build a kindergarten and we’re not allowed to use money.” Many people have no money so it’s not allowed. Just go and make it happen! As people embrace the mission they begin to discover an amazing number of resources. Wood, stones and workers of all kinds, coming to help for free… simply because it’s a game. It’s not easy, but its not supposed to be easy. It’s supposed to be a challenge. Otherwise it’s not fun.

When fellow students galvanized around this approach, calling for training to be able to bring the power of play to other places of need, Edgard and friends began framing up a methodology and open source technology called Oasis Games, which is now spreading all over the world, addressing goals challenges ranging from building community gardens to supporting the sustainable reconstruction of Nepal. 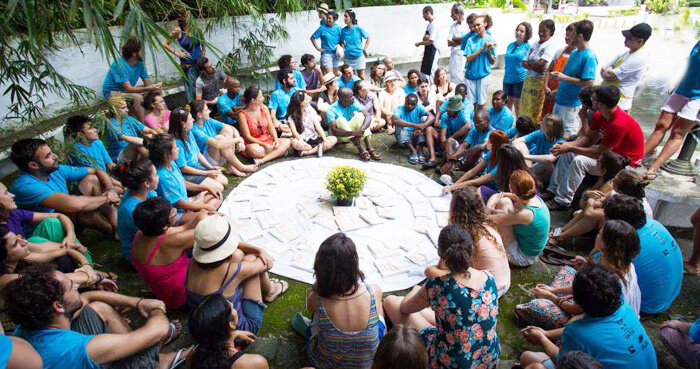 Playing as a Pathway to Realising Dreams

In Edgard’s view, the basic goal of any Oasis Game is to make a community dream come true. Not a trouble or a problem. “It has to be a dream. Because when we achieve a dream, we automatically solve many problems and issues. Just one dream solves a lot of issues together… So we address the dreams.”

The first step of an Oasis Game we call The Gaze. Basically you have two hours to find three manifestations of beauty and three manifestations of abundance. We train our eyes not to see what’s wrong, what’s broken, what’s ugly, but where is the beauty? It may be found in a quiet walled garden or a stack of seashells on a table. Simple things that mean something to people.

The second step is about Affection. After finding beauty, the next step is to discover the stories behind the beauty. To spend time with the person and to learn why is this beautiful garden here? Where did these shells come from? Who planted this tree? The person begins to share how her grandmother used to spend days in the garden and how the seeds have been shared between families and how the shells and treasures have been collected throughout her life. When you talk about something special and someone really listens, you want to share more and in this space you begin to shine.

There are six steps in an Oasis Game – The Gaze, Affect, Dream, Care, Miracle, Celebration and Re-evolution – each building upon the next, ultimately catalyzing hands on action, inspired by the people, in ways they would often otherwise never think to work together. The game may involve players from many different areas of society, local government, nearby businesses and the community itself. The game was conceived to be applied at no cost and in a fully cooperative way so that, together, all participants can accomplish a common goal. “The design of the Oasis Game strives to allow all players to be winners, without exception.”

We believe that every single human being is naturally a big flame and naturally should be burning brightly. But many of us have shrunken our light and we are just like a small flame. And many more of us are just an ember. And some of us are like coal. But there is always a point of light in the stone. What we do with Oasis is just go there and gently blow on the ember. The heat has to come from inside of you. We just blow the flame so it can ignite itself.

When you meet someone who is aflame they are able to light up all the people around them in any situation. Those people are so powerful. They change our lives. The things we build and create in the Oasis Games are really just an excuse. The real mission is to inflame humanity.

An Invitation to the Ultimate Game

Edgard and his team are now in the advanced piloting stage of a next-level game experience called Play The Call, with an aim of mobilizing two billion young people over the next four years to come together and play for the ultimate mission… “save the plant for real.” Watch this space for updates and your invitation to PLAY!

If we can bring people back – bring their flame back – they can solve their family and community challenges by themselves. When we do this on a global level, there is nothing we cannot solve or create together.