The Three Pillars for Transforming Our Society

If the world is to be healed through human efforts, I am convinced it will be by ordinary people, people whose love for this life is even greater than their fear. ~ Joanna Macy

It is too easy in today’s world with news headlines about global conflict and the depressing state of the environment, to fall into hopelessness and apathy about the possibility of anything ever being any different. The future can appear dastardly bleak, but is it really? Perhaps the state of the world is merely a call to arms; to passionate action to defend what we love and to fight with the heart of a sacred warrior for this beautiful place we call home. Maybe we just can make a difference, if we change our perception and discover our inner power.

Buddhist activist and scholar, Joanna Macy, has created a visionary model for helping us to move through this current time of great evolution, to a resilient, creative, and life-affirming way of living.

This model is a guiding tool for how we can achieve what Macy calls ‘The Great Turning’:

[the] transition from the ‘industrial growth’ society to the ‘life-sustaining’ model…Macy frames [this] as the third great revolution in history after the Agricultural and Industrial revolutions, and as one that will be occurring much more quickly than the previous two, with an active and conscious participation on the part of humanity as a whole. 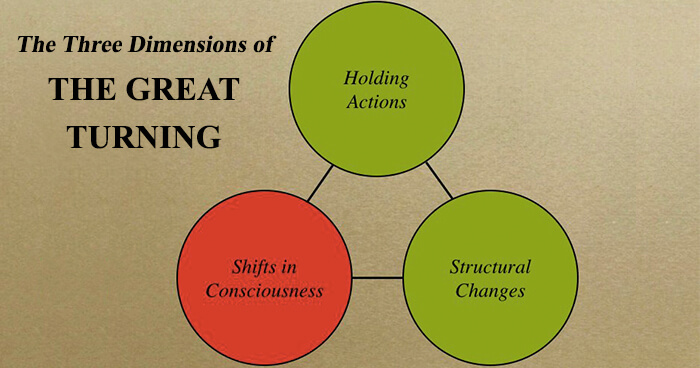 Joanna Macy’s model is a guiding tool for how we can achieve The Great Turning.

According to Macy, to accomplish this turning, work needs to be done in three distinct areas. They are as follows:

This is essentially what we normally call activism or direct action. It’s getting out there in the streets and saying a “Holy No!” to the destructive and unjust practices that are taking place on the planet right now. It’s putting bodies in the way of an out of control global system as it marches its sick juggernaut towards some form of deterioration or collapse. Macy says this could take the form of:

…blockades, boycotts, civil disobedience, and other forms of refusal…Work of this kind buys time. It saves some lives, and some ecosystems, species, and cultures, as well as some of the gene pool, for the sustainable society to come. But it is insufficient to bring that society about.

This is where we actively work to build new societal forms, new economies, new ways of being together and organizing etc. This is the realm of the famous Buckminster Fuller quote:

To change something, build a new model that makes the existing model obsolete.

In a similar vein, the German anarchist, Gustav Landaeur, once wrote:

[the state] is not something that one can smash in order to destroy…The state is a relationship between human beings; one destroys it by entering into other relationships.

Structural change is where we develop the forms of a new society right within the old one, eventually having what’s needed to shed our former skin. 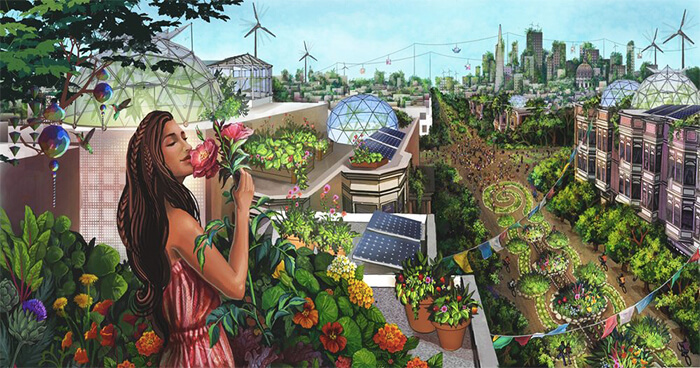 Change happens when we build new structures within the old, until it becomes redundant.

There are a lot of folks working on these sorts of projects today, ranging from permaculture to Transition Towns, resilient communities, food sovereignty and the local food movement, peer-to-peer production, gift economies and other alternative economic forms, open source culture, green technologies, eco-villages, education initiatives and the list goes on.

This is where we do the work of inner spiritual and psychological transformation, what Joseph Campbell called ‘the inward journey’. Here, we intentionally try and develop beyond our ‘skin encapsulated egos’ and open into wider spheres of identity with the earth, the cosmos, and the whole of humanity. This can happen through new forms of thought, understanding the Great Story of which we’re a part, and in particular, through the many spiritual traditions that have developed the methods for such transformation over the centuries.

For Macy, this is important because:

These structural alternatives cannot take root and survive without deeply ingrained values to sustain them. They must mirror what we want and how we relate to Earth and each other. They require, in other words, a profound shift in our perception of reality–and that shift is happening now, both as cognitive revolution and spiritual awakening.

Joanna Macy on The Great Turning.

So that’s Joanna Macy’s three-pronged model for achieving The Great Turning. I like this model because it helps to distinguish three distinct, yet equally important, areas necessary for achieving large scale societal transformation. This is helpful because individuals and communities often focus exclusively on one point of the triangle; furthermore, there’s often substantial debate as to which one is most important, and thus most worthy of our time. But as author and Insight Meditator, Darrin Drda, writes:

A successful transition to a more sustainable world will require substantial, simultaneous, and prolonged effort in all three areas…Like everything else in the universe, the three arenas of change are intimately interdependent.

When we discussed this model, Darrin made the point that each of us is going to be drawn to, and more effective at, one of these dimensions in particular. Some of us are full of courage and fire and are willing to risk body and more in an act of civil disobedience. Others will be more attracted to getting their hands in the dirt and creating new systems, while others will be fuelled by diving into the work of evolving consciousness. 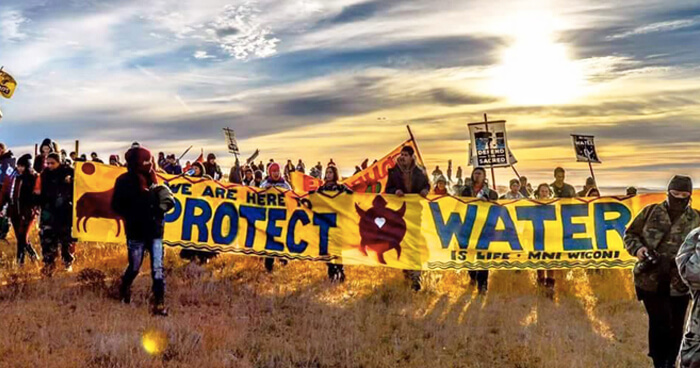 The potential for change increases if we try different aspects of the model.

While I think there’s an important truth to this, I’d still like to see more mixing of the three going forward. I’d love to see communities of spiritual seekers go out together at an Occupy protest or some other direct act of ‘refusal’, and I’d love it if more activists got out to retreats and developed a daily spiritual practice. And I’d like to see all of us out there supporting these new forms of community, culture and exchange, building the new flesh of the multitude as we act in common.

Joanna Macy’s model for this great turning is possible, and can happen if each one of us is willing to engage and cooperate, and make an evolved and positive future possible for us all. While the ship appears to be headed in a fatal direction; too close to the precipice to be turned around, if we hold onto hope and take the action needed to transform ourselves and our world, anything is possible. When we come together as a global family, something radiant and vibrant is created that will support all life on our beautiful planet.

With this turning, the truth of the coming to presence of Being will expressly turn in–turn homeward–into whatever is. ~ Martin Heidegger, The Turning (1954)