The Spirit of Standing Rock is Spreading

People from more than 300 tribes traveled to the North Dakota plains to pray and march in solidarity with the Standing Rock Sioux. Back home, each tribe faces its own version of the ‘black snake’ and a centuries-old struggle to survive.

Sometime last year, the Standing Rock Sioux Reservation in North Dakota became not just a physical location but an iconic challenge to the national conscience. Like the Selma Civil Rights Marches in 1965 or the Frank’s Landing Tribal fishing rights demonstrations in 1970, Standing Rock’s ‘Water Protectors’, as they call themselves, have transformed ideas of advocacy and resistance with nonviolent direct action and prayer. They have built coalitions across movements for tribal sovereignty, defense of natural resources, resistance to expanding energy infrastructure, and cultural survival. They have shown the world a culture grounded in stewardship and connection to Earth. 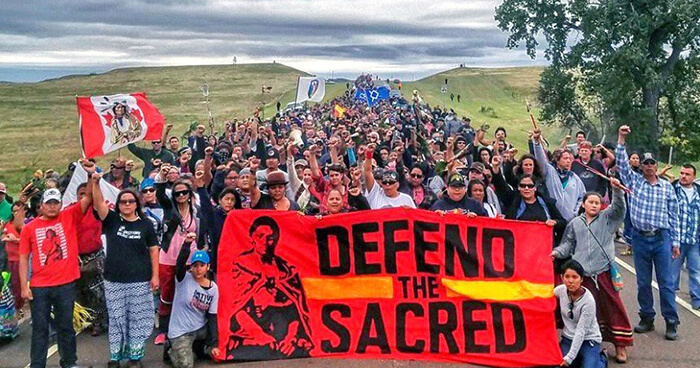 The Standing Rock model of resistance; its Native-led, youth-driven expertise is moving outward to help other communities protect their land and resources.

The resistance that persisted, even through the cold and dark of the North Dakota winter – with ongoing injuries and arrests – shows how difficult, dangerous, and uncertain it can be to speak truth to power.

Now the spirit of Standing Rock is on the move across the United States.

Its Native-led, youth-driven expertise is extending outward to help other communities protect their land and resources. In Texas, Frankie Orona, from the Borrado, Chumash, and Tongva people, is leading actions against the Trans-Pecos Pipeline, which will carry fracked gas across Texas and into Mexico, if completed. For months, he and others have danced, prayed, and sang on the path of the line. Recently, they were arrested after locking themselves to construction equipment. 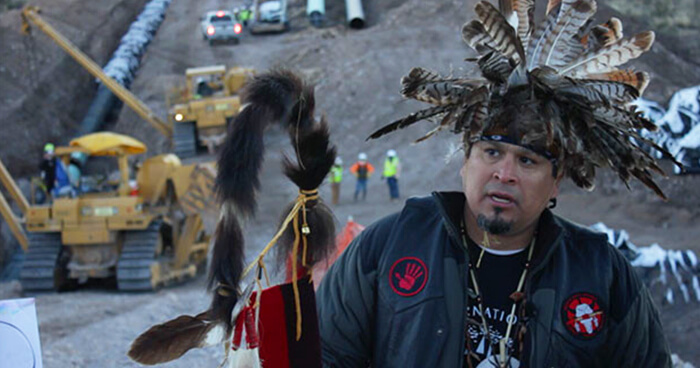 In December 2016, after consulting with the Indigenous Environmental Network, which was central to organizing the Standing Rock resistance, Orona’s group established a camp and built a Native/non-Native support system, similar to Standing Rock’s, with backing from local environmentalists and ranchers. One rancher is hosting the camp on her property.

The Standing Rock spirit has also been evoked in Florida and New Jersey, where Natives and non-Natives have united to object to the Sabal and Pilgrim pipelines, respectively. In Florida, four camps were recently established to protest the Sabal line, and on January 6, Dallas Goldtooth of the Indigenous Environmental Network went live on Facebook to urge Standing Rock water protectors to go support these other fights.

Elsewhere, Native people are standing up for mountains. In Hawai‘i, conflict rages over placing another telescope on the holy peak Mauna Kea. Prayer gatherings, blockades, arrests, declarations of Native self-determination, and a lawsuit have blocked the project so far. In Arizona, longtime protests have also sought to roll back desecration of Mount Graham, where a telescope mars the sacred summit. 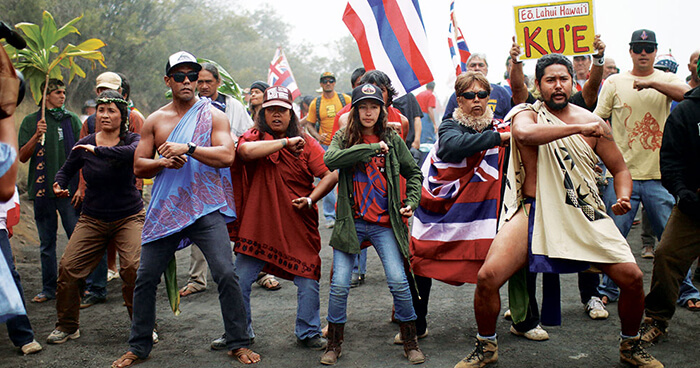 Certainly, the Standing Rock campaign has inspired wider interest in Native struggles, agrees Judith LeBlanc, director of the Native Organizers Alliance and a member of the Caddo Nation of Oklahoma. LeBlanc calls the awareness a “Flint moment” for Indian Country. She comments:

People everywhere are talking about Standing Rock, which has magnified the reality of other situations like it.

And she is optimistic. She notes that tribal struggles are ever more successful:

Stopping drilling in the Arctic and a giant coal export terminal in the Northwest, cancelling oil and gas leases in a Blackfeet cultural landscape—these successes have been Native-led.

Shoshone-Bannock professor and pundit, Mark Trahant has pointed out in YES! that the end of these stories is no longer “inevitable,” with Native communities always losing to outside interests. Tribal advocacy has helped protect more places in recent weeks.
[signupbanner]

In Colorado, the Piñon Pipeline will not go forward, the company that was planning to build it has announced. In the last weeks of President Obama’s term, he protected the ancient spiritual places and magnificent scenery in southern Nevada as the nearly-300,000-acre Gold Butte National Monument. He did the same for 1.35 million acres in southern Utah; now the Bear Ears National Monument. Notably, at Bear Ears, indigenous people will contribute to ongoing management decisions. Though state and congressional officials have said they will fight both monument designations, such actions are difficult to unwind. 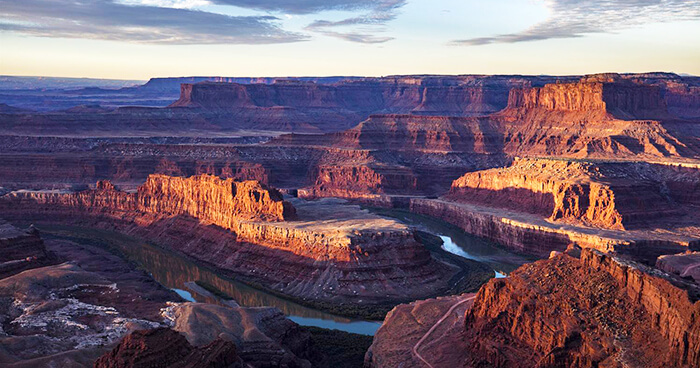 The United States needs us Native people…without us taking the lead on these issues, there would be chaos. As a country, we have to choose a better way of being.

Native-led campaigns take place in courtrooms, legislatures, and other government chambers. They also occur during face-offs on the prairie, desert, and tundra. “So far, we haven’t had to stand in front of bulldozers,” says Kimberly Williams, Curyung tribal member, and director of an Alaska Native group seeking to protect the massive Bristol Bay salmon fishery from a proposed mine. “But I’m ready to.”

What we learned at Standing Rock is the power of unity… hundreds of indigenous nations from all over the country and the globe stood together, along with supporters, and that endures.

By the end of November 2016, more than 300 tribes were represented at the Standing Rock camps. But back home, each tribe faces its own struggle against government and industry, with decades of destruction and injustice behind and years of fighting ahead. 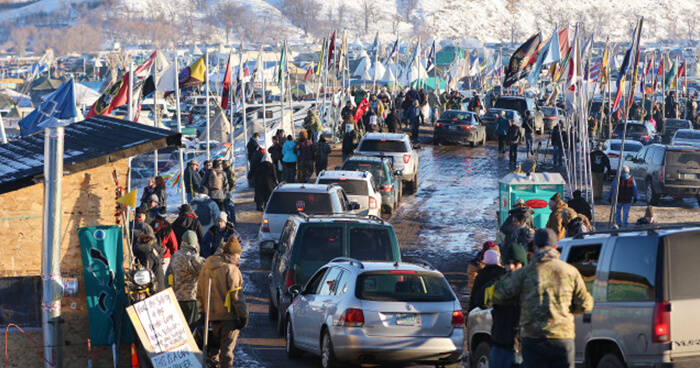 An astonishing 300 tribes were represented at the Standing Rock camps.

Across the United States, many more Native people are engaged in struggles to protect their sacred lands, rights and the environment. Galvanized by the outpouring of support at Standing Rock, action is happening in the northeast at the Great Lakes, where the Chippewa Indians in Michigan are raising awareness and demanding attention be given to two aging oil pipelines from the 1950’s on the base of the Great Lakes. Even a minor spill from the pipelines, which are corroding, would be disastrous for the environment.

Miles away in the northwest of America, the tribes of the Columbia River Gorge are coming forward to protect a spring that corporate giant, Nestle, is trying to draw off bottled water, for sale. This proposed action undermines native culture and threatens treaty-reserved rights, as well as the environment.

In Nevada, the Western Shoshone Nation is protecting a tribal sacred site, the Tosawihi Quarries, from destruction by gold mining, while further south in Utah, the Navajo Nation was hit with a polluted San Juan River in 2015, from mining operations upstream. The river which runs through the Navajo Reservation from the Rocky Mountains is still polluted, and their farming and economy were abruptly brought to a halt. The Navajo are suing the EPA and trying to ensure something similar doesn’t happen in the future. Further south in Oakflat, Arizona, the Apache are fighting to save their sacred lands from an impending copper mine that would leave an enormous crater. 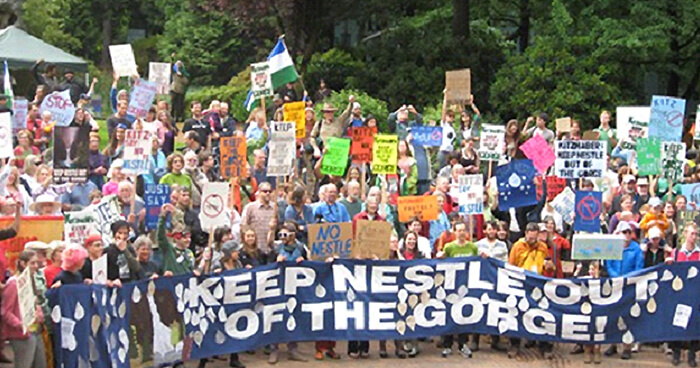 The tribes of the Colombian River Gorge stand against Nestle.

In the south, in Bristol Bay, Alaska, salmon and the lives and livelihood that depend on it, are at risk from the proposed Pebble Mine upstream; which would be one of the largest copper mines in North America. The local tribes have the full support of other Alaskan non-natives and are fighting together to put a stop to the mine. And in Thurston County, Nebraska, the Omaha Tribe; which was devastated by flooding after a US Army Corps of Engineers-induced dam release, is dealing with the aftermath which destroyed sacred sites, homes, and their livelihood.

You can read more details about the powerful action happening across America here.

And we are defending sacred land and the environment here in Western Australia. This is a global resistance. Stand strong all you water/tree/sea/land/cultural protectors! rethinkthelink.com.au