The Shamanic View of Christmas

BY Briony Dalton
Welcome to UPLIFT
Stories of Love
The Shamanic View of Christmas
Could Santa Actually be a Shaman?

Have you ever wondered where the tale of Santa Claus came from? When you think about it, the jolly old man in red and white, who travels on his sleigh pulled by flying reindeer to deliver gifts to children all over the world, is a pretty fantastical notion. So where did this eccentric, universal tale begin?

We’re told that he is based on Christian Saint Nicholas, who was known for his extensive generosity and good charity in the Fourth Century, in modern-day Turkey. A devout Christian, old Saint Nick represented love, charity, and good faith. It is said the Dutch adopted Saint Nicholas (for them, ‘Saint Nikolaas’ which soon morphed to, ‘Sinterklaas’) and brought his legacy to America in the 1700s.

But there’s another, lesser-known story; one that quite convincingly explains the bizarre traditions of our white-bearded, present-bearing, fur-clad, chimney-descending friend. This story begins in a land far, far away; a land in the North covered in snow, where reindeer freely roam. Alas, I’m not talking about the North Pole … This story begins with a Shaman. A Shaman who descended down smoke holes in snow-covered homes, carrying medicinal red and white mushrooms to give to the cold families that inhabited them, during the relentless winter solstice.

Shamans and their Practices

We’re in Siberia, pre-expansion of the Russian empire in the Seventeenth Century; a country that is known for its vast landscape, and harsh Northern winters. Several Indigenous tribes dwelled here and amongst them were ‘Shamans.’ (See comment below from Nihal Sarikaya)

Shamans can be described as conduits of spiritual energies. They were, and still are in some parts of the world, known for their abilities to reach altered states of consciousness in order to access the spiritual world and bring forth healing and wisdom. For this reason, they are highly regarded among their communities and are often respected advisors and representatives of the Great Spirits.

Shamans commonly use plants as medicine and to facilitate their connection with Spirit. They work with powerful, mind-altering, psychedelic plants such as Ayahuasca, Peyote, Washuma and more. Siberian Shamans typically used the fungus Amanita muscaria, known more commonly in the West as ‘magic mushrooms’ or ‘toadstools’.

Amanita muscaria is a native of Siberia, among other regions of the world. These bright red mushrooms with their cute white specks have long been associated with folk tales of fairies and other mystical creatures, but also make an annual appearance at Christmas time. Many of us have likely had the adapted versions; red and/or white baubles, currently hanging from the branches of our Christmas trees, which according to some Ethnographers, is no mere coincidence. 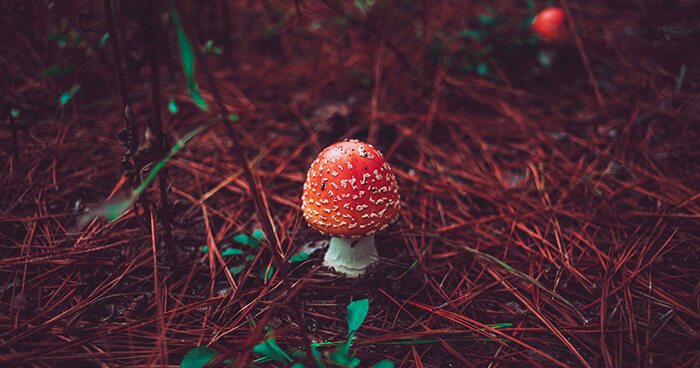 Amanita muscaria mushrooms grow under pine trees and were hung in the trees to dry. Image: Timothy Dykes

The forests of Siberia are predominantly made up of pine trees and Amanita muscaria are commonly found growing at the base of the majestic pines since the two have a symbiotic relationship. Sounds a lot like red-and-white wrapped gifts found at the base of a traditional pine Christmas tree. The Siberian Shamans would spend ample time collecting the precious fungi from the forest floor and then went about drying them, as eating them fresh was dangerous but dried and administered in low doses, the mushrooms produced a sensation of warmth and increased energy.

In the warmer months, this was done by positioning them amongst the branches of a central pine tree that received direct sunlight (hello Christmas baubles!). The other method was to place the fungi in a sock hung by the hearth. Fascinating, right?

The connections don’t end there. As the solstice drew nearer and the days grew shorter and colder, it is believed that Shamans would visit people’s homes to deliver and administer these medicinal dried mushrooms; these treasured gifts, to brighten the damp spirits of the families trapped in their cold homes. Due to the extreme winter conditions, the doorways to these dwellings would often be snowed in so the only access would be through a hole in the roof where the smoke from the fire would escape; AKA chimney. 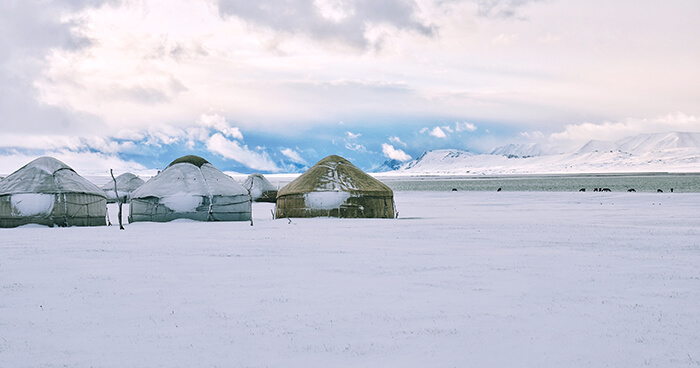 Shamans would descend through the roofs of people’s homes to bring them the mushroom goodies. Image: Wouter Naert

Presents under pine trees; pretty red-and-white decorations dangling from branches, an adored man descending through chimneys with his red-and-white gifts, and socks with more treasures hanging by hearty fires. The correlations are quite astonishing, but there’s still more – we haven’t yet addressed the unmistakable attire of our friend Santa or his trusty steeds.

An Image of Generosity

Almost every Westerner knows Father Christmas wears a red, velvety suit with woolen or fur trimmings to keep the chills at bay. Many believe it began with Coca-cola, who adopted Santa as their jolly red and white mascot in the 1920s. Prior to that, Santa’s ‘look’ was inconsistent, and not the kind, round, white-bearded man we all recognize now. He was often depicted in a variety of ways; Elf-like, or tall and gaunt, sometimes wearing a bishop’s robe or a Norse huntsman’s animal skin. The Bishop’s robe and tall, gaunt look were likely influenced by Saint Nicholas, as that is how early doctrines described him. As for the ‘huntsman’ look, Siberian Shamans would wear coats of caribou (reindeer) so it’s not unrealistic to speculate this image was birthed here and tales of these deer-coated men, with their unusual winter solstice practices, spread far across Europe, and later, the world.

Finally, we come to Santa’s reindeer friends. Siberia has a large population of reindeer, both wild and domesticated, and early Siberians depended on these animals for their survival. Aside from their meat and fur, they were used to pull sleds; an efficient and practical mode of transport in this snow-covered region of the world. It is thought that people who were hallucinating from the gifts of Amanita muscaria mistook the reindeer and Shaman to be flying off into the night. 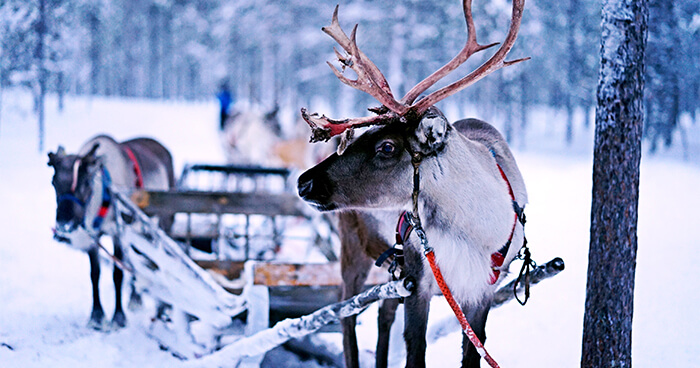 What Magic do You Choose to Believe?

So what does this all mean? For a start, it clears up many obscurities around Santa and Christmas. Upon researching, however, it became clear to me there are a number of stories regarding Santa Claus’ origins, and though we can speculate until the reindeer fly home, one can never know the absolute truth of this tale. The Siberian-Shaman-became-Santa theory appears to check out, but perhaps both sides of the story contributed to the evolution of modern-day Santa. Perhaps it doesn’t matter.

Whether this Shamanic twist of the tale is, in fact, responsible for Santa or not, my exploration of this festive topic has revealed to me two notable things:

Regardless of the origin of this jolly character, his essence is unwaveringly consistent, and to me, that’s what matters here. St Nicholas or Shaman – both are global beacons of kindness; both symbols of the spirit of coming together.

Secondly, the polarity of one origin having roots in spirituality and the other in religion just reminds me, no matter who you are, what you look like, what you believe, or where you come from, the story of human connection and community is what has stayed the distance. It’s strong. It’s global. It runs through us all. It is our shared essence. Even if we don’t subscribe to the beliefs it stems from, we can all relate to the moral of this story; the story of a shared humanity, of kindness and hope.

A very Merry Christmas and may the essence of Santa touch you this festive season and well into the coming year.

What are some ways that you keep the ‘essence’ of Santa alive throughout the year? Perhaps you already do, or maybe you feel inspired to start? Either way, we’d love to hear in the comments below!

Your shares inspire us and we always love to hear what you have to share.

Many happy and loving returns to you.

[…] No, I’m not talking about the North Pole. This story takes place in Siberia and begins with Shaman. During the relentless winter solstice, Shaman descended down smoke holes in snow-covered homes, […]

Hello. Nice article. Please inform the readers that the Siberian Shamans are a Turkic tribe. The Turkic people live between Korea to Finland, including the Sahka, Kazak, Uygur, Kyrgyz, Turkmen, Tatar, Turks, Huns, Gagauz, Azeri. The Mongols are a genetic cousin to the Turks. Also note that the Turkic people practice many types of religions: Tengri, Buddhism, Judaism, Christianity, and Islam. Thanks for sharing

This article was fantastic. I am armed with knowledge. Makes too much sense to not be true. Both are origins! Coca cola as well unfortunately.

There was a Chinese ?Buddhist saint way back when who just liked to see people happy – he didn’t preach but walked from village to village with a large sack distributing toys to the kids. I like that guy! Also he was quite fat and jolly, like Santa.

Love this story! I’ve always had a connection to the nomadic Mongols so I choose to believe they did start to Santa/shaman ball rolling. THANK YOU! LOVELY LOVELY LOVELY

That was beautifully written with so many interesting connections! Love the underlying message of people all celebrating in their own ways, beliefs & spiritual frequencies with the shared humanity of kindness and hope. Lovely❤️

Thank you for sharing your beautiful exploration. Our beliefs can be very personal and conditioned but our Story as One Humanity is our collective Reality. Christmas is the special time for healing the Heart, the Spirit, to end the illusion of separation and also to share the Joy of the renaissance of our spirits.

Did you know the deer ate the Amanita? And then the shaman would drink the deer’s urine afterwards? They fly home with the deer.
This Amanita was active three generations of urine. So people would drink the shaman’s urine to become high as well.
Red and white spickled.