The Seven Arts of Zen

What makes a zen art?

There are many practices such as yoga, chi kung and many others can involve embodiment of a meditative state while ‘chopping wood and carrying water’.  Many practices include the practice of cultivating ever deeper awareness of the present moment somewhere in the teaching, but a Zen art has this kind of awareness as the very foundation stone that all other practices are built on.

The zen arts can include disciplines ranging from architecture to butoh dance, which emerged as a form of trauma healing after World War II, however here is a glimpse of the zen arts through the lens of seven of the most classical practices.

In archery from all over the world there are generally two schools of thought: draw and release without thought and allow the body and the subconscious to find the target without our conscious mind. The more obvious method is to draw, hold, aim and fire – where the contraction and fatigue of our muscles holding in order to aim can arguably interfere with the advantage gained by taking conscious aim.

Kyudo (zen archery) in some ways is all encompassing of this dichotomy. It takes the approach of action without engaging the conscious, active, thinking mind – but when mastered it can be applied anywhere on the spectrum between slow, careful execution to fast and free flowing.  The key is in engaging the will to take action and at the same time, paradoxically being without thought and without expectation.

“Don’t think of what you have to do, don’t consider how to carry it out!” he exclaimed. “The shot will only go smoothly when it takes the archer himself by surprise.”
― Eugen Herrigel, Zen in the Art of Archery 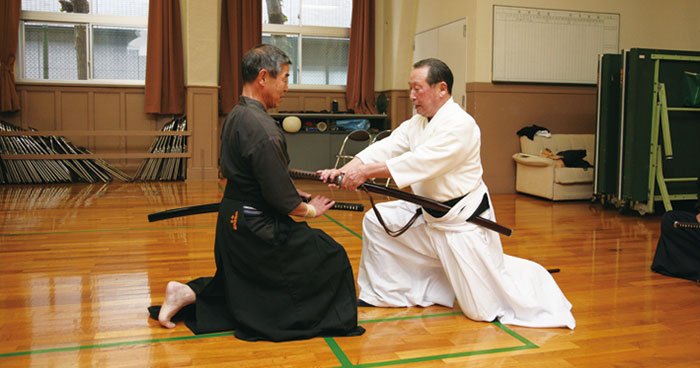 The zen saying ‘mushin no shin’, mind without mind (often shortened to ‘mushin’, no mind) is a fundamental basis of zen arts, but nowhere is it more critical than in budo.  One of the keys is in repetition of training so that the subconscious and the nervous system knows what to do before without the time delay required for the conscious mind to kick in and figure out what is happening.  Response becomes sensory reflex and conscious thought becomes afterthought.

The mind must always be in the state of ‘flowing,’ for when it stops anywhere that means the flow is interrupted and it is this interruption that is injurious to the well-being of the mind. In the case of the swordsman, it means death. When the swordsman stands against his opponent, he is not to think of the opponent, nor of himself, nor of his enemy’s sword movements. He just stands there with his sword which, forgetful of all technique, is ready only to follow the dictates of the subconscious. The man has effaced himself as the wielder of the sword. When he strikes, it is not the man but the sword in the hand of the man’s subconscious that strikes. – Takuan Sōhō, zen master. 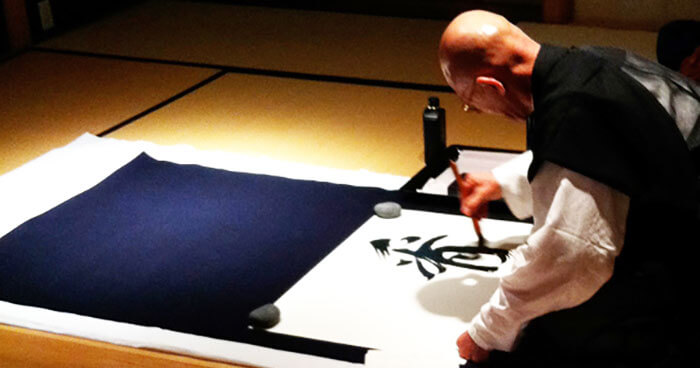 Zen calligraphy is very much about the perfect execution of a movement or series of movements, completed in an instant, preferably the instant before conscious mind engages and interferes with elegance and flow.

Perhaps the quintessence of zen calligraphy is the Enso – the practice of painting a perfect circle in a single brush stroke.  Like archery, Zen calligraphy is practiced when one is in a state where the mind has become still, which in other culture may even be referred to as trance, or an altered state of consciousness. A zen practitioner may refer to this state as the original state of awareness.

“The right art,” cried the Master, “is purposeless, aimless! The more obstinately you try to learn how to shoot the arrow for the sake of hitting the goal, the less you will succeed in the one and the further the other will recede. What stands in your way is that you have a much too wilful will. You think that what you do not do yourself does not happen.”
― Eugen Herrigel 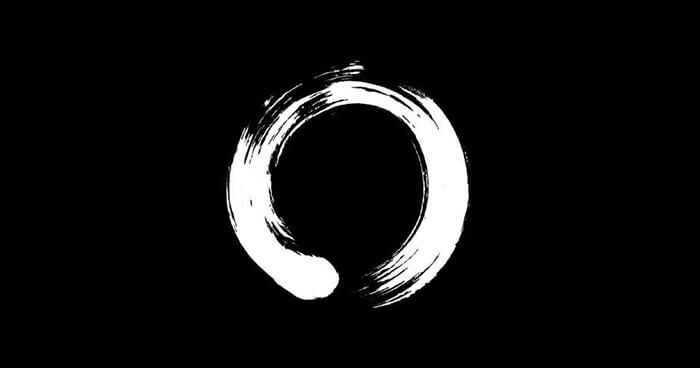 Haiku asks the question: how much can one convey and how accurately and effectively can one convey it using only five syllables then seven, then five? It is a form of poetry that provides a rigid container of limitation, designed to be a reminder of how much can be said and done with very little. A haiku explaining haiku:

Distilled to essence
Generations in one seed
An atom unlocked

One of the beautiful lessons of haiku is that limitation and challenge can be stimulating for creativity and that there is a reciprocal relationship between challenge and ingenuity.  A guitarist playing a guitar with a broken string may, while working around the limitation may stumble on undiscovered creative originality.  This idea is a reflection of the ancient Chinese concept that in crisis both danger and opportunity are present. 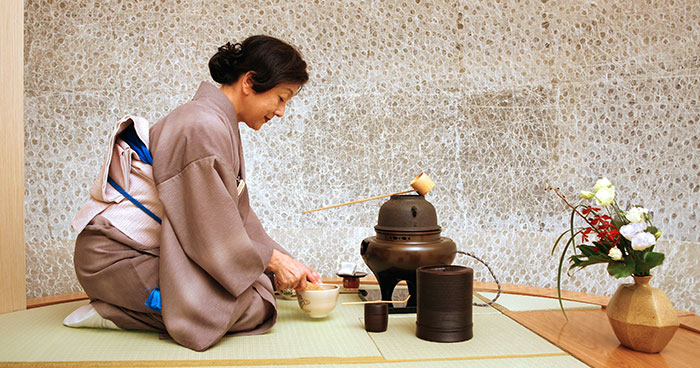 Like the practice of zen archery, Tea Ceremony is practiced as a slow, deliberate yet calm and flowing ritual.  It is an exercise in the grace and flow of the human body, with every moment executed with exactitude and precision.  This points to perhaps the original purpose of ritual itself, a tight set of parameters where one can observe whether they are completely calm, centred, relaxed, focused, balanced and grounded within themself – because if they are not something in the ritual will be out of place.

When a tea ceremony practitioner pours with perfect eleqence but spills a tiny drop or bumps something unintentionally, or in any other way falls outside the very tight parameters of action, it reveals a moment when there was distraction from full presence.  If someone wants to extend their ability to remain in full presence then a ritual such as this can be a powerful training ground.

When the doorway of immediacy is held open, life itself streams through. – Michael Maso Ellis, Zen arts practitioner 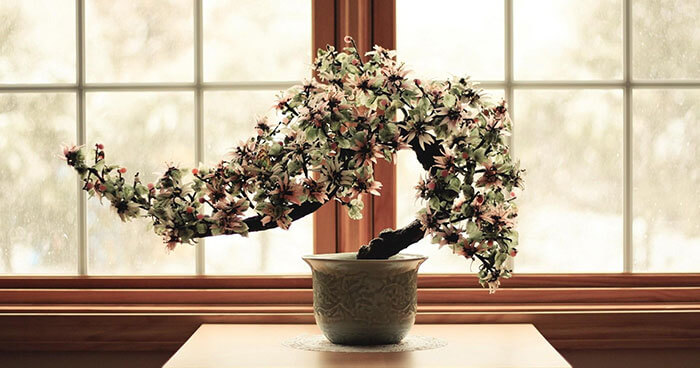 The gift of bonsai is a in that it requires patience on a scale that is hard to really grasp without doing it. Anyone can prune a tree in five minutes but bonsai is an art that involves comtemplating and imagining an artisitic design that one may not see for many years to come, and then ever so infrequently after deep contemplation pruning to make slight adjustments, perhaps only one or two cuts in a year.

The challenge is that unlike most sculptures this medium is alive and growing, it is responding… in slow motion. A trim here could produce a new shoot there.  The sculpture has changed and may require revision of earlier plans. From a zen perspective Bonsai brings many lessons, not least of which is the value of not wanting to make things happen faster than they need to as it becomes a daily reminder that not all of nature moves by the same cycles of time that we do. 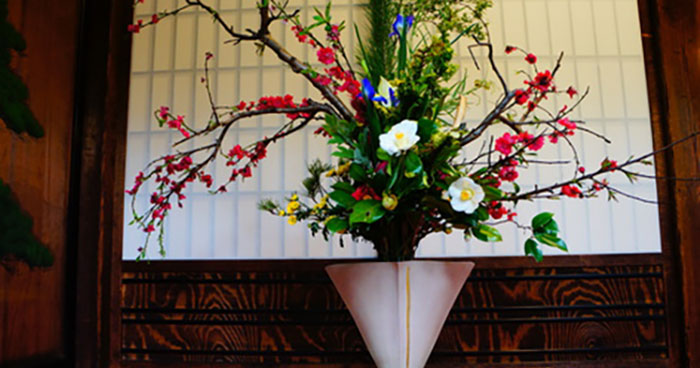 Ikebada or kado, the way of flowers is a zen art that is highly disciplined like the tea ceremony and in some ways like calligraphy with a focus on clean elegant lines.  As one would expect with a practice designed to cultivate deeper awareness of the present, it is perhaps more about the flow and execution of the arrangement than the outcome of the design itself.

A wide variety of schools exist with different styles as well as different limitations on materials that can be used, which often stretch widely into nature, well past the domain of flowers, stems and leaves.  It is both a creative art and a practice of silent contemplation rooted in the placement of flowers on buddhist shrines for deceased ancestors.

An excellent video on the origins and use of Haiku as a zen art.

Here’s a great video about the origins and purpose of the tea ceremony.

A very fascinating article about the spiritual and cultural aspects of Zen! There is so much beauty in Asian culture, what I would define as a gentle strength, that is appealing to me. I was wondering…I run an online magazine focusing largely on the liberal arts and culture called “The Fellowship of The King” (www.thefellowshipoftheking.net), and I wanted to inquire if it might be possible for me to republish this article there, with proper credits and a link back to this site. If so, please message me back either here, or via email: [email protected]

Zen is the beautiful flow of a river

That suddenly opens a door

Allowing a fish to strike ahh…