The Sacred Power of Yantra

Symbols, for as long as mankind has been around symbols have fascinated us, their architecture invoking inner archetypes. It’s no surprise that ancient India has authored the deepest symbology of all, a mapping of the human body through a sacred geometry called Yantra.

The word Yantra comes from the root word Yam, meaning to sustain. A Yantra is like a place holder, a fixed image which roots the divine into matter. The word Yantra also refers to an instrument or a device, something that can be used to perform an action more efficiently, like scissors or a knife. In the Bhagavad Gita Yantras were used on the battlefield and described as machines drawn by oxen or horses with doors facing all directions. 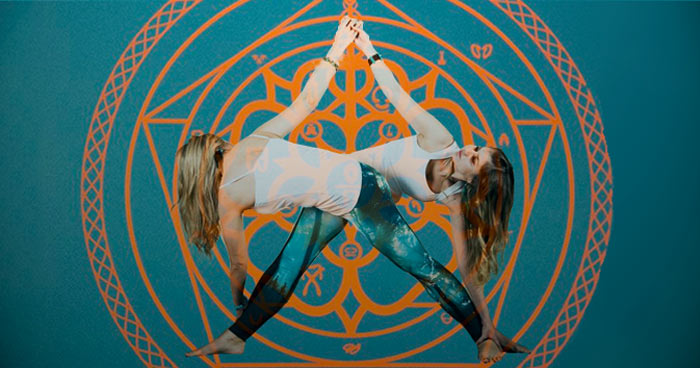 A Yantra is more commonly recognised as a sacred diagram, which like the spider’s web grows away from the centre in stages until its expansion or contraction is complete. The Yantra has around it several concentric shapes, like triangles, circles, petals and squares which continue to expand or contract as precisely as the spiders web.

The Body as Yantra

In the practice of Tantra, a philosophy which sees the body as an instrument for liberation, the human body is a Yantra, a device for moksha or freedom. Tantra works with both Mantra and Yantra. When it comes to personal practice; chanting a Mantra specific to a deity like Ganesh invokes the mind of the deity whereas drawing, painting or visualising the yantra invokes its body. 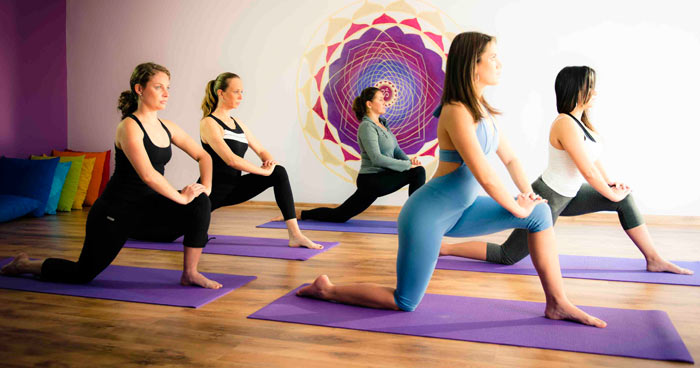 The human body is a Yantra

Yantra practices are quite complex and much more challenging then the practices of asana, pranayama, meditation and mantra. Holding the image of a Yantra in your mind requires focus, concentration and an ability to visualise easily.

The Healing power of Yantra

The Tantric texts describe Yantras as a means to actualise greater health and wellbeing. Science confirms that visualisation is a potent form of concentration due to the dominance of the visual cortex. When a visual pattern is introduced and reinforced it enables us to let go of our preoccupations with thoughts, in turn releasing stress and bringing the whole mind-body system back to balance. 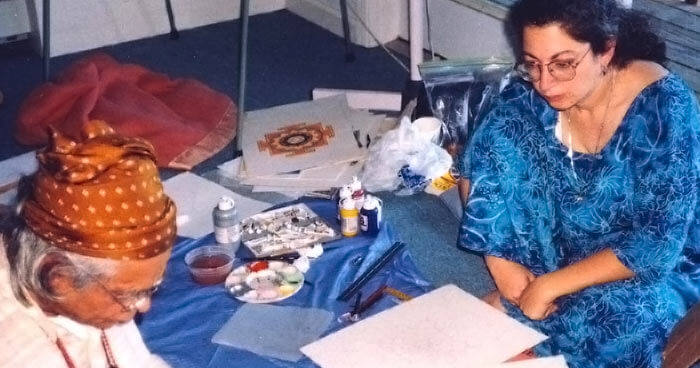 Mavis Gewant, an American sacred artist, mother, educator and doula, learned the ancient techniques of Yantra and deity painting from Tantric Master Harish Johari after meeting him in Amsterdam in 1979. She never planned to paint Yantras, but Johari recognised her gifts and inspired her to mentor with him and share her knowledge worldwide.

I believe that Yantras are a personal prescription for healing. Whether with a deity or a planet, it is an energetic entity you are working with to heal and create a connection in a very deep way. Personally I have experienced working with specific Goddesses and I have taken on those qualities to create change in my life. For example, The Goddess Kali, is one to invoke when you have a fear of death. As the Goddess of Transformation, she will get rid of things that are no longer necessary in your life, and I have experienced that firsthand. 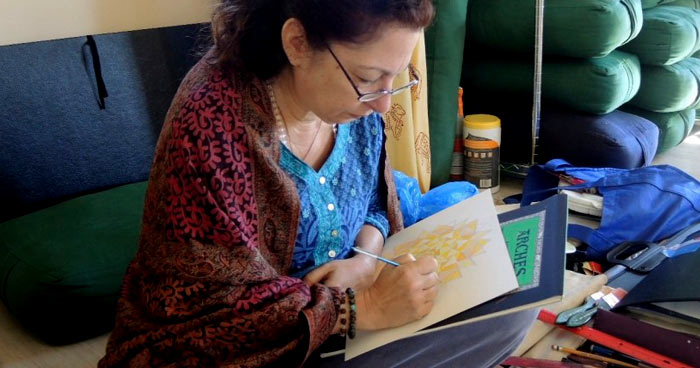 Yantras give a pattern to energy. Since all cultures have these kinds of shapes, they resonate in our DNA when we see them. By creating a Yantra, one sits for hours absorbed in the energy of the particular deity they are working with. When one chants the corresponding Mantra, both hemispheres of the brain are activated, eventually creating a state of one pointedness, healing and transformation.

From the visible to the invisible

In the Tantric tradition there are three important ways to invoke and work with specific aspects of creation, called Devas or Devis. We can invoke the deity through sound (mantra), visualisation (yantra) or by making offerings to an idol, which represents the deity. 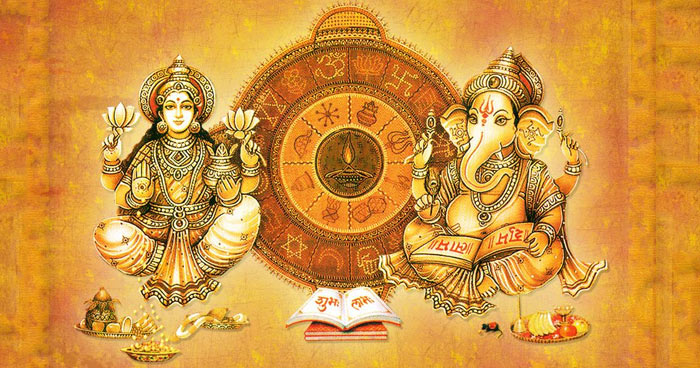 In our western culture we tend to work in the opposite direction, preferring an intellectual abstract concept over a fairytale. Ekabhumi Charles Ellik, another American yoga teacher, performance poet and sacred Yantra artist, who began teaching Yoga to enhance his coaching practice shares

In the process of studying Yoga, my priorities changed. After several years of serious yogic practice and study with a Jyotish (Vedic astrology) teacher, I concluded that an auspicious way to express my karmas in this life was through devotional poetry and art, not through producing events and coaching. As an artist, I was not particularly drawn to Yantras or Mandalas. My interest was in the figurative depictions of deities, but it had been years since I painted the human figure. So I decided to start with the Yantras because they appeared to be so simple. Little did I know the challenge of making a functional Yantra was much greater than just artistic technique! The “sacred” part of sacred geometry leapt into my awareness as soon as I began working with the basic ritual of creating one. They are alive. I thought yantras were the beginning, but quickly learned that they are the pinnacle of Tantric arts.

A Yantra is likened to a map to help you find your way. As you create the Yantra you inscribe your thoughts, emotions and feelings into the Yantra. The finished product becomes a potent tool for meditation and a symbolic reminder of a chosen deity, called your Ishta Devata. 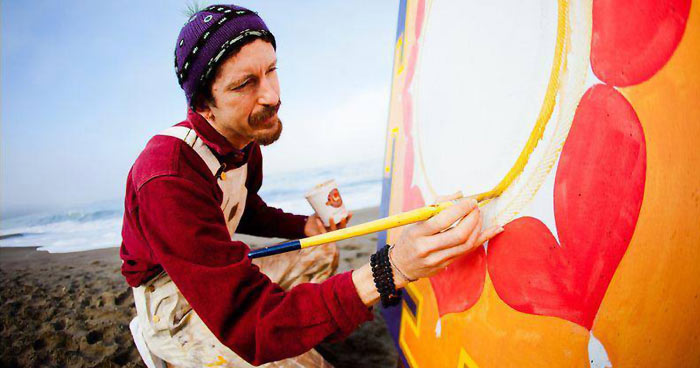 “People are deeply affected by the palpable sense of internal cohesion that comes with meditating upon them,” Ekhabumi shares, “ Making a Yantra for oneself, of course, is the most palpable and perhaps the most potent way of meditating upon it. When we work with enlightened deities, they act as caring guides for our transformation. The word ‘yantra’ means ‘device’, but it is not a machine like a chainsaw. It’s a material expression of a divine being filled with love. There is no question in my mind that Yantras are powerful. Working with one is like open-brain surgery on yourself!”

Creating Yantras is an age old practice yet something we can access readily today. Without even realising it we are always creating Yantras, drawing patterns in the sand, arranging flowers in a vase, placing items in our homes in a way that expresses harmony and balance. A Yantra is constructed in two different ways Either moving from the centre outwards or from the edges inwards. Moving from the centre we see the evolution of a seed to fruition, which emulates birth. Moving from the edges to the centre is a journey of dissolution and letting go. 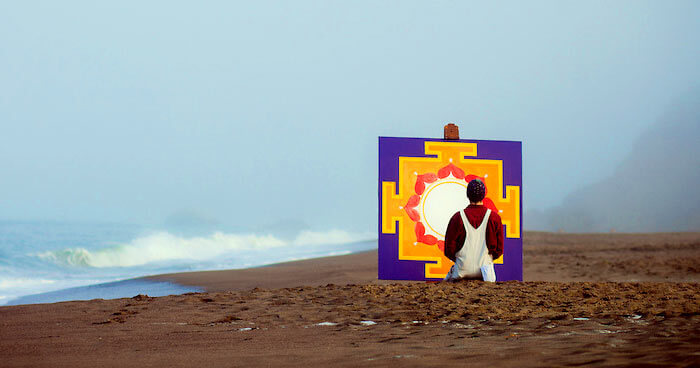 The colours and materials are  also important and something Ekhabumi encourages his students to explore:

A deity yantra is a confluence of many patterns of consciousness and energy. The tools we use, the material we draw upon, the time of day, the direction we face, our own disposition, these all contribute to the resulting yantra. Whatever materials we use, the point is to arrange them in a way that they become a vehicle for the energy we are invoking. It’s like arranging an old-fashioned antenna on a radio, you might have to move it around or stick some tinfoil or a coat hanger on it to get the channel you want to come through clearly. Consider this metaphor: you are creating a work of art as a gift to your beloved (the deity). You want her to visit more often, so it makes sense to consider her tastes, so she will be pleased. If you know she loves the colour yellow, why would you give her purple? 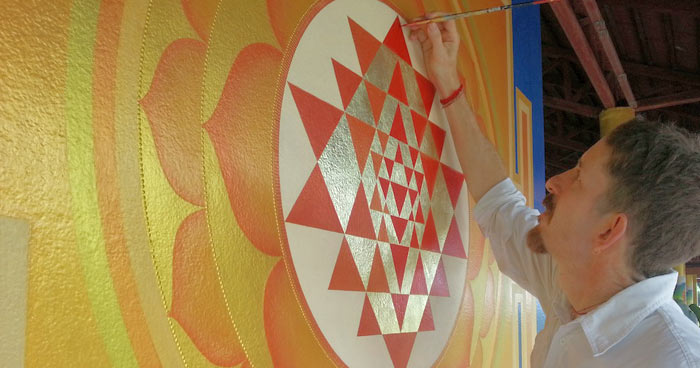 The sacred power of yantra

Creating Yantras in a traditional lineage requires a strict adherence to the rules. In some orthodox traditions an elaborate ritual called the Prana Pratishta is enacted to infuse the deity into the Yantra. Mantras, flowers, pranayama practices, incense and herbs are all brought to the yantra and offered as if the yantra were a living being. Once the ritual is complete the yantra is placed on an altar and used for healing, wealth or a device to enhance meditation.

Yantras used in non-traditional ways as a form of sacred art are healing and transformational. A collaborative Yantra constructed in silence without specific directions can result in a masterpiece of form and flow. Like walking a labyrinth, creating a Yantra speaks to an inner journey. It might seem pretty commonplace to colour in a design or fill in a shape with flowers but setting an intention, which speaks to the heart and then placing each flower or colour delicately into the shape evokes deep seated emotions. The whole experience should be pleasing, pleasing to the participants, which in turn naturally pleases the deity. 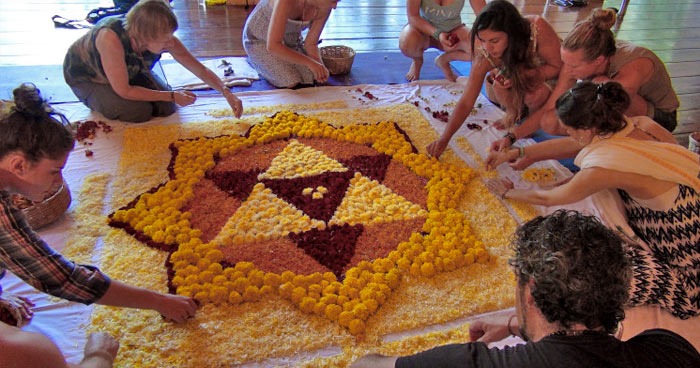 Steps to creating your own Yantra

In Hatha yoga a practice has many aspects. If you’d like to explore the practice of Yantra its easy to start. Especially if  you use a Yantra practice as a method for developing  your focus and concentration. One of the best Yantras to start with is the Ganesha Yantra. Ganesha is a benevolent deity which removes obstacles. Constructing the Yantra requires specific knowledge of geometry, so if that’s not your forte, the internet is a great resource for images of Yantras. 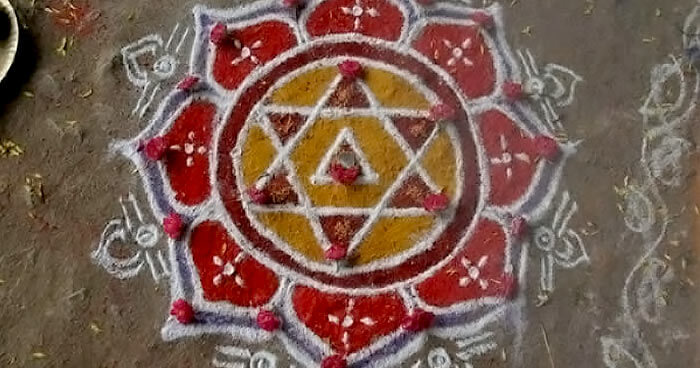 Once you have settled on a Yantra, you can draw it, paint it, build it with rice, coloured sand, candles, seeds, flowers, rocks, the options and materials are limitless.

As you construct the Yantra think about what’s important to you, what things you’d like to change, is their someone in your life that needs healing or support, are there feelings in you that need expression?

As an act of pure devotion pour your heart into the Yantra.

Once the Yantra is complete, take a walk around it, observing it from all angles. 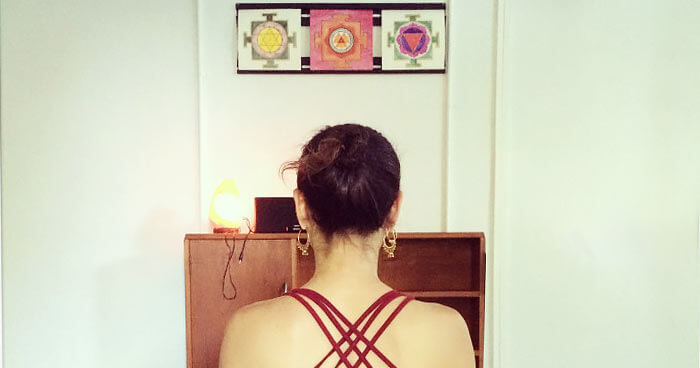 Sit and face the Yantra

Then sit and face the Yantra, gazing at it without blinking until your eyes water. Close your eyes and see the Yantra as a reverse image burned on the retina. Once the image fades open you eyes again and repeat the same steps. Eventually the mind will become calm and the senses will withdraw.

When you feel ready open your eyes and move back into your day. 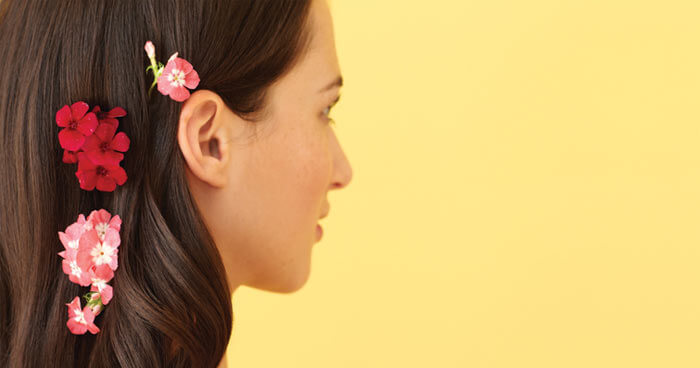 When you feel ready open your eyes

If you’ve painted the Yantra you can return to the Yantra anytime for contemplation and meditation. If you have constructed the Yantra with natural materials take it somewhere special, like a river, a lake or even a place in nature you love and give the Yantra back to creation.  Releasing the Yantra back to the elements symbolises our own willingness to let go of the thoughts and emotions associated with the creation of the Yantra.

Yantras are a potent tool to remind us of the stillness, beauty and peace that we already are. Unlike the more dynamic aspects of Yoga anyone of any age, belief system or background can work with Yantra and as Ekabhumi aptly shares,

I really do believe that any offering made with no desire for personal gain is accepted by an enlightened deity. The point is the giving, not the gift.

Awesome. Happiness. Love. Abundance and Health I deserve everything. Thank you

To whom may i bow and respect to.concept of yantra creates vibration.this is the momentum where energy created tru a patern.
Its vibrates from vision stored in mid brain then modified our yantra
Which we are unaware of our dna patern.the changes accepted as more frequent vision capture the patern and send to subconcious mind.” Subconcious mind believes it and accept it.the implementation send to unverse tru contact or cakera from visudh or throat cakra…..key word is vibration.yet another dicovery is soon to be release …follow up.