The Power of Sharing Stories

BY Liz Brazile
Welcome to UPLIFT
Stories of Love
The Power of Sharing Stories
Can Storytelling Improve Your Mental Health?

As Joe Clemons was growing up, he used to listen to family members share stories. Some stories were imaginative and rousing, while others were more monotonous. Nevertheless, hearing accounts of how his elders experienced life before him was a form of bonding and had a large part in shaping his selfhood—especially the stories his father told him about coming of age as a black man at the height of the civil rights movement.

“A lot of those stories are tied to my identity,” Clemons said. Though his father wasn’t particularly fiery in his delivery, his career as a preacher meant oral storytelling was a natural element of his parenting. Clemons now attributes his own career as a poet and spoken word artist, in part, to those moments.

Any story he told was to give you better context to understand the world you’re in, and that’s what I try to do when I’m writing.

Storytelling and Our Sense of Self

Exchanging stories with family members is not an inconsequential pastime. Research published in Emory University’s Journal of Family Life shows that a people’s knowledge of their family history correlates to higher self-esteem, lower anxiety, stronger familial cohesion, and a better sense of control over one’s life. Furthermore, internalized family narratives can influence one’s sense of individuality.

James Allen, an assistant professor of psychology at Trent University in Peterborough, Ontario, has studied narrative identity theory, the notion that an individual’s stories about one’s life should be regarded as an essential element of one’s personality.

There’s lots of evidence that the stories we hear growing up in our families and in our cultures play a major role in how we develop a sense of autobiographical memory, which then leads to a sense of identity. 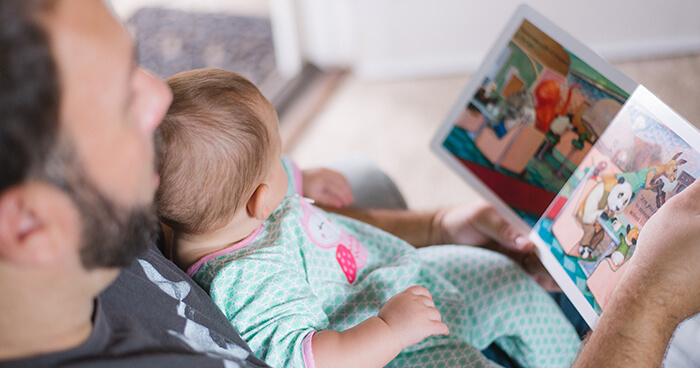 The stories we hear growing up help us develop our sense of identity. Image: Picsea

The Way You Tell a Story Matters

Narrative identity theory also maintains that the manner in which people tell stories about their lives may predict certain outcomes, such as their quality of life. In other words, people who tell happier stories about their lives tend to report higher instances of wellbeing, compared to those who share primarily negative stories. Telling stories with a mixture of qualities is associated with shifts in wellbeing over time.

Allen has also examined the relationship between oral storytelling and the socio-emotional development of elementary school-age children through a series of studies on their engagement with oral narratives. One characteristic he pays special attention to is the coherence with which children reproduce the stories they’ve been told.

Narrative coherence is a developmental skill that children learn, and it’s something that’s part of our sociocultural environment. When we’re young children, we tell a lot of stories with our families, with members of our cultures, and with our friends. Each of these experiences of listening to stories is giving us different kinds of resources we can use to build our own stories.

A recent study by researchers from Princeton and New York universities found that there is significant overlap between the parts of the brain activated by both speech production and speech comprehension. This includes parts of the brain associated with social cognition and the ability to discern the mental states of oneself and others.

Trisha Lee, a U.K. based educator, founded the non-profit theater and storytelling arts program MakeBelieve Arts in 2002. She travels to schools to train teachers in a form of storytelling known colloquially as ‘helicopter stories,’ in which children create a narrative out loud as a teacher writes it down. The children then act out the story.

Participation isn’t mandatory, but students often come around on their own terms, Lee said. She described scenarios in which she’s seen otherwise non-communicative children happily participate in the creation of helicopter stories.

How we make sense of ourselves is where we fit in the stories of our peers. That’s what we do in life—I understand your life because you tell me a story about yourself, and that’s what happens with the children. 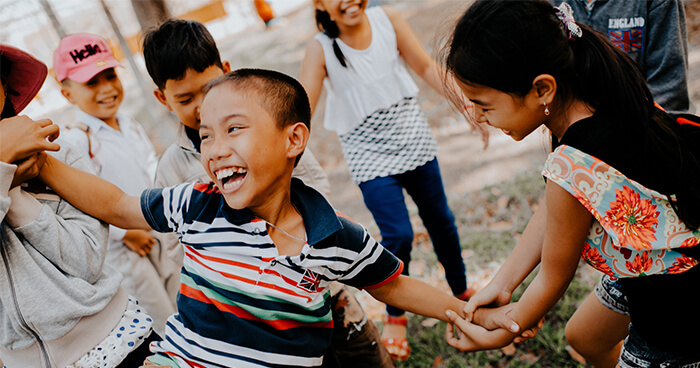 Stories help us understand and relate to others, which is important as children. Image: Mi Pham

According to narrative identity theory, stories often convey a sense of purpose—or perhaps a lack thereof—on behalf of the narrator, and the delivery of a person’s story can provide insight into the state of their mental or physical health. Symptoms of mental disorders such as schizophrenia, for example, might include disjointed narratives.

Storytelling at the Heart of Health Care

According to pediatrician Sayantani DasGupta, the ability of health care professionals to attentively listen to their patients’ stories is vital to successful treatment.

DasGupta teaches in Columbia University’s program in narrative medicine, an interdisciplinary approach to medicine that upholds that the humanities are as much a part of the health care profession as the hard sciences. The program is training the next generation of medical doctors in honoring the stories of their patients so as to produce better health outcomes. DasGupta said:

Storytelling isn’t new to health care. It’s actually always been at the heart of health care. Before physicians and nurses could provide antibiotics and life-saving surgeries, what we had was the ability to show up and bear witness to people’s stories.

While the advancement of medicine has improved society’s collective health, the quality of human interaction has diminished.

When that happens, you get dissatisfaction on both sides of the stethoscope. We see the problems that happen when people on two sides of a relationship don’t communicate.

The consequences of poor communication between doctor and patient can manifest in the form of overlooked symptoms, misdiagnoses, and a lack of trust. DasGupta teaches her students a concept she’s coined: ‘narrative humility.’ It’s the idea that a listener—usually a practitioner—respects that stories are not complete windows into a person’s experiences. Narrative humility, DasGupta said, was born in response to the misconception that cultural competency can be achieved by studying paradigms that pathologize the health behaviors of people from different socio-cultural backgrounds. 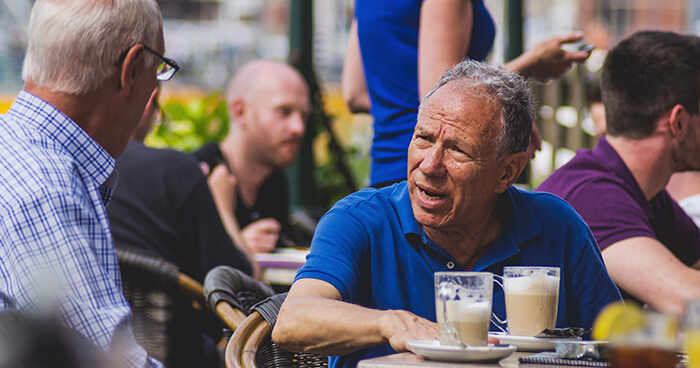 The humanities are as much a part of the health care profession as the hard sciences. Image: Shane Rounce

The Healing Power of Stories

With a similar ethos in mind, third-year Brown University medical student Anna Delamerced founded a storytelling program at an assisted living facility after bonding with an elderly resident she visited as part of her first-year curriculum. Research has shown that group reminiscence activities, or sessions during which people exchange stories about their lives, can help combat the ennui seniors experience upon being institutionalized and reduce health risk factors such as social isolation.

“I wanted to start this storytelling program as a way to bring people together, make connections for the residents, and sort of let their voices be heard,” Delamerced said. She meets with the residents of Ethan Place in the city of Warwick, Rhode Island, at least once each week and prepares story-exchanging activities for them. While the initiative is primarily intended to benefit the residents, Delamerced said it’s been mutually beneficial.

I’ve just been humbled and in awe of their life stories. It’s helped me I think become a better med student and informed me in how I want to practice as a medical doctor in the future.

For his part, Clemons has been brought closer, not only to the elders he’s exchanged stories with directly, but also feels he’s become closer to elders he mostly learned about through stories. He doesn’t remember much about his maternal grandfather, but his family narratives have fostered a sense of connectedness to him. One story he’s been told repeatedly is of how his grandfather successfully demanded his family be served at a whites-only restaurant during a family road trip from Arkansas to Ohio in 1962.

That’s a proud story. It could’ve went really bad—I could not be here potentially. But that story is in my blood. They compare me to him sometimes because he was willing to stand on a principle. If he didn’t feel like something was fair or equitable, he said something about it.

I find this most interesting, specially as I have turned 80 recently & have the privilege of living with my only daughter & two grandchildren. This has reminded me of so many incidents & experiences in my childhood which I can share with them and by doing so, will hopefully give them a more ‘rounded out’ knowledge of my life & childhood. My mind is suddenly brimming with stories I could tell them of things that happened & things I did as a child!

Wonderful . Ought to be compulsory learning for all Homes and children would fare well from positive family positive story times.
The research at Princeton and…New York Unis The connection with social understanding and understanding ones own and others mental state …and the overlap of brain areas that deal with comprehension and production of speech I find very interesting .