The Opposite of Fear: the Medicine of the Ocean

BY Chip Richards
Welcome to UPLIFT
Stories of Love
The Opposite of Fear: the Medicine of the Ocean
Lessons from the Ocean

We lived near a special beach a few years ago, where our daily rhythms were woven into the lives of a local pod of dolphins. Every day for about six months, they met us in the waves, and each day their behaviour seemed to reflect our thoughts and actions in profound ways, often revealing to us some deeper truth or lesson about life.

While at first it seemed like they were simply everywhere that we were, on further reflection, we started to see a pattern in their appearances – one that coincided with our own willingness to follow spontaneous impulses and sparks of intuition. That quiet voice that calls us up from the computer mid-sentence to run down to the beach, despite the pressure of impending deadlines … that shift in the breeze that makes us turn left on our beach walk when we normally turn right … that whisper that says to stay and surf just one more wave before going in … These quiet streams of inner promptings, which are so often drowned out by the rivers of our busy minds and daily to-do lists, seemed to be the realms in which the dolphins exist. The more we allowed ourselves to respond to that little whisper inside, and to move with the subtle waves of energy that prompt us into positive action (even when we didn’t know why), the more we found ourselves in the same place at the same time, doing the same thing as the dolphins and whales. They called that part in each of us … and each time we answered, they met us there with a gift or experience.

One day when I had something heavy weighing on my mind and was feeling fearful about a certain aspect of my life, I went out surfing to find some peace.  I caught a few waves and the dolphin pod arrived, so I followed them, paddling for about 20 minutes into the open ocean. At first, I felt much better (how could you not feel better, hanging out with these guys?) but eventually, my thoughts began circling back to fears about the problem I was having in my life … and the strangest thing happened. As if on cue, the very moment my thoughts shifted away from being present with the dolphins and back onto my fears, instantly the dolphins disappeared! Gone completely in a puff of smoke. 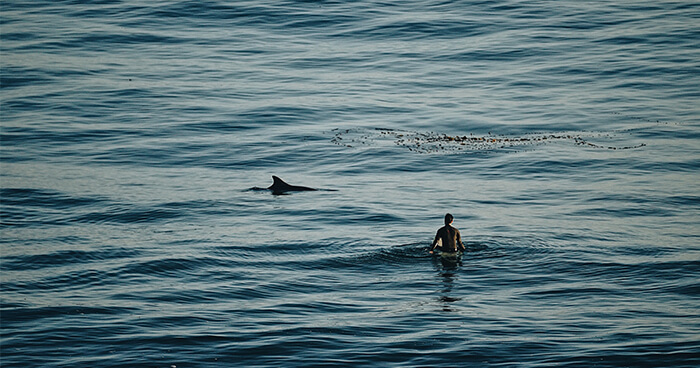 Children power along at every angle and degree to expand outward into the world. Image: Neil Ingham

Sitting up, I glanced back to shore, realising for the first time just how far out to sea my so-called dolphin friends had lead me… way out! The beach was a thin strip of white in the distance, and I was a tiny dot floating out in the big blue.

Then suddenly I noticed something else … A large, dark shadow hovering directly underneath my surfboard. I held my breath. This was way bigger than a dolphin and twice the size of my surfboard. To my knowledge, it could only mean one thing … my dolphin friends had brought me out here as an offering, to be eaten by a shark!

Every cell in my body recoiled. With toes in the air, I lay frozen on my board, waiting for the shadow beneath me to move. But strangely, it just stayed there, hovering hauntingly, reflecting my worst fear in magnified form. Finally, after what seemed like minutes, I lost patience waiting for death to find me and I stuck my head under the water to see what was going on.

There I saw an amazing thing … what I had perceived to be a large, hungry shark preparing to eat me, was actually a cluster of three dolphins gliding together, directly below. The water had magnified and distorted their image, melding my most treasured allies into the vision of my greatest fear. And what was most powerful to me was that the timing of this shift had coincided exactly with the moment that my mind had shifted from being with the dolphins to thinking of the fears and worries of my life. It was as though the dolphins’ external actions had simply reflected my own changing thoughts. And while it appeared that they had abandoned me to be eaten by the sharks, in truth they were simply waiting for me to look beyond the surface of my fabricated reality to the greater truth and their presence which was there all along ready to guide me back to shore. 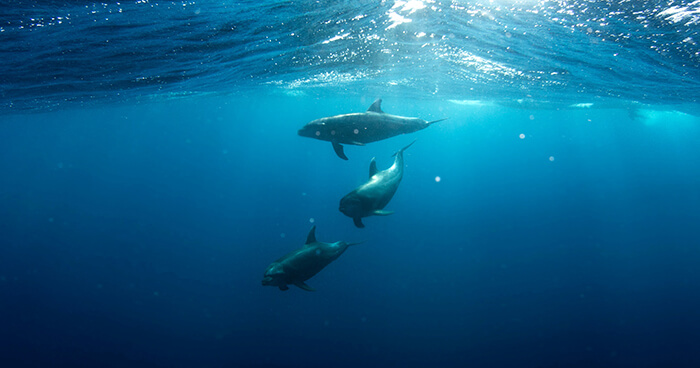 Children power along at every angle and degree to expand outward into the world. Image: Talia Cohen

What I discovered here in the water – and have found to be true in my life ever since – is that when we trust enough to look beyond the surface of even our greatest fears, the vast majority of the time, we discover that the opposite of our fear is true. And in our moments when we think we are all alone (even left to be eaten!), there are always allies and forces – seen and unseen – waiting to be recognized and guide our journey home.

When you consider your own life, and an aspect, situation or relationship in which you would most love to make a powerful shift, change or transformation. What are the fears or worries you currently have that may be holding you back, keeping you stuck, paralysed from full expression?

Take a moment to imagine how you would feel, how you would act, who you would allow yourself to BE right now if you knew that the OPPOSITE of your greatest fears were true?

What if you knew that surface worries of loss, rejection, failure, unworthiness – or whatever may be plaguing you – were masking a much greater force resting just below the surface, waiting to be fully embraced?

I will leave you with a familiar quote from A Return to Love, by Marianne Williamson, who speaks powerfully to the nature of fear itself.

Our deepest fear is not that we are inadequate. Our deepest fear is that we are powerful beyond measure. It is our light, not our darkness that most frightens us. We ask ourselves, Who am I to be brilliant, gorgeous, talented, fabulous? Actually, who are you not to be? You are a child of God. Your playing small does not serve the world. There is nothing enlightened about shrinking so that other people won’t feel insecure around you. We are all meant to shine, as children do. We were born to make manifest the glory of God that is within us. It’s not just in some of us; it’s in everyone. And as we let our own light shine, we unconsciously give other people permission to do the same. As we are liberated from our own fear, our presence automatically liberates others.

I love this. When I graduated HS in Hawaii, I helped train dolphins at the military base in Kaneohe Bay for one season. Many hours in the water with a dolphin named Sara… she laughed at me, I miss that. I think she thought my crude attempts at swimming were hilarious. It is hard to describe the feeling of total understanding and complete companionship she and I shared. Many many rides holding on for dear life while travelling at break neck speed through the water. Sara never left me alone out there beyond the reef, she’d swing around and see how I was doing and escort me home. One time she even actually bonked a shark with her snout when he came too close to me. That was really loud and he immediately turned tail and ran. Thank goodness.
I quit the job when I found out the true outcome for my friend when she did what I trained her to do. I felt shame knowing I had taught her to sacrifice herself as collateral damage on the mission they sent her on.
I remained a water baby doing scuba, snorkling and body surfing whenever I could and worked as a cook on a yacht where they called me “Dolphin Lady” cause whenever I laid at the bow the dolphins would come play racing and crossing right in front of us making everyone laugh out loud. They passed within inches, they are amazing and powerful swimmers with such accuracy! A lot of times dolphins show up to play with me when I am in the water and I always love it. But none visit up close, in touchable distance like Sara did. I now live on the mainland so am only able to see them when I play the tourist and go visit back there. But I always look forward to seeing any dolphin.
Again Thank You for telling this story.
Valerie

It’s perfect time to make a few plans for the future and it’s time to be happy. I’ve read this post and if I may I desire to suggest you some interesting things or advice. Maybe you could write subsequent articles relating to this article. I wish to learn even more things about it!