The Most Powerful Way to Help Someone through Emotional Pain

BY Tree Franklyn
Welcome to UPLIFT
Stories of Love
The Most Powerful Way to Help Someone through Emotional Pain
When Kind Advice Just Doesn't Cut it...

When you can’t look on the bright side, I will sit with you in the dark. – Unknown

I walked in for my monthly massage and immediately sensed something was off.

A layer of desolation hung in the air like an invisible mist, ominous and untouchable, yet so thick I felt as though I could reach out and grab a handful in my fist, like wet cement, oozing out between my fingers.

I’d been seeing the same masseuse once a month for three years, repeating the same routine each time. I wait in the hallway just outside her rented studio, a large walk-in closet-size room in a building filled with hundreds of similar rooms, each rented to private individuals running their small passion businesses. Across from her, a wax studio. Down the hall, a hair salon.

The building houses the manifested dreams of men and women who finally had enough of the daily nine-to-five grind, fired their bosses, and defiantly forged their way into their own businesses, renting space big enough for their hopes yet small enough for their start-up pockets.

The appointment started unlike any other. When her door’s closed, it means she’s with another client, so I sit in the hallway, in one of the two wobbly wooden chairs the building provides for each tenant, and wait.

When the door opens and the previous client leaves, we greet with hugs and smiles, expressing mutual joy in seeing each other again. As she closes the door, I take off my clothes and lie on the table face down, exchanging small talk about any happenings since we last saw one another.

Except this time, on this fateful day, the door opened and I was greeted by an overwhelming sense of sorrow spilling out of the room with a vengeance; as if it had been trapped for decades.

Standing in place of my masseuse friend was a lifeless, hollow shell of a person with empty, zombie eyes. I hardly recognized her. 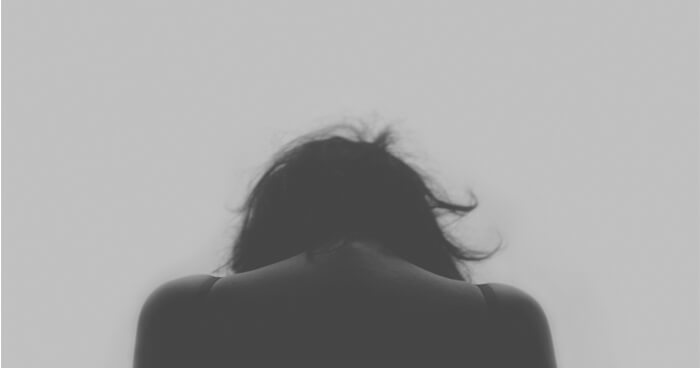 A layer of desolation hung in the air like an invisible mist, ominous and untouchable. Image: Volkan Olmez

Jen (not her real name) was clearly not her usual self.

I’ve seen her in several bad moods throughout the years but this was beyond moods, and bad was too kind a word.

Like me, Jen’s an introverted, sensitive soul, and neither of us has tolerance for inauthenticity or meaningless chit-chat. We had long established that she didn’t have to be ‘on’ around me, that she was allowed to take off her professional mask, and I my client mask, and we could simply be ourselves with each other; neither of us having to endure the torture of polite pleasantries if we didn’t feel like it.

One of my pet peeves is society’s constant pressure and expectation to put on a happy face and pretend everything’s okay, while inside things are desperately broken.

So I said “hi” and walked in, neither expecting a return “hi” nor receiving one. She closed the door behind me and tears suddenly welled in my eyes as I undressed, as if sorrow no longer had the means to escape through the open door and found another way out by hitchhiking with my tears.

I wanted to respect the present moment, even though I didn’t understand it, so I stayed silent and lay on the table, face down, as I’d always done.

Ten minutes in, between deep long strokes on my back, I heard a soft, almost inaudible, “I lost the girls.”

Jen had been pregnant with twin girls. I remember the day she told me. She could barely wait for me to get through the door before blurting out, “I’m pregnant!” She and her husband had been trying to get pregnant for a while and finally, she was not only pregnant, she was pregnant with twins!

And now, she wasn’t anymore. 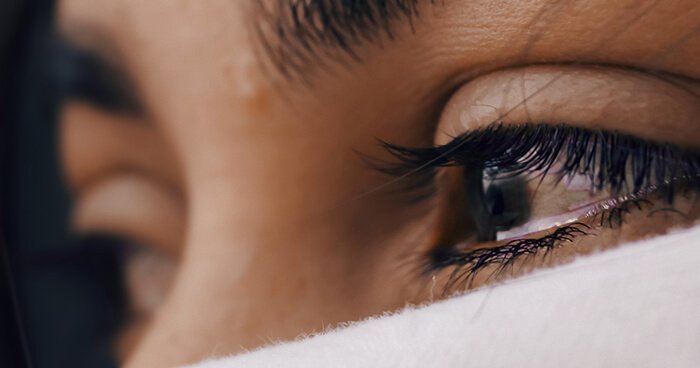 She closed the door behind me and tears suddenly welled in my eyes as I undressed. Image: Luis Galvez

I sunk into the massage table as the enormity of what she said dropped into me. And then, I started to get up and tell her that she didn’t have to massage me. We could talk if she wanted, or she could take the extra hour to herself, I’d still pay her. She gently nudged my shoulder back down and said she needed to work; it kept her mind from self-destructing.

She told me that her soul had been emptied along with her womb, and there was nothing left, let alone tears, inside her.

I had enough tears for both of us so I told her I’d cry, for her, her girls, and her loss. For the next forty-five minutes, as she released my knots, I released tears, wails, and guttural sobs. It came and went in waves and I became acutely aware of the rhythm of her breathing as it converged with mine and became one.

Between waves, there were moments of talking.

Like with me, she had met many of her clients with the exciting news that she was pregnant, and like with me, she also had to tell them she was no longer pregnant. Client after client, spread out over weeks, she had to repeat the same story, over and over, until every client who knew had been caught up.

It was a devastating loss for her, and one she had to retell to each client, all hearing it for the first time, all with similar questions and the same sympathetic side tilting heads in response.

She said her days have been filled with well-intentioned but stale advice like “everything happens for a reason,” and “they’re in a better place now,” and “you’ll get pregnant again.”

She told me each time she heard these statements, it felt like another jab in her weary stomach. She didn’t care about getting pregnant again, better places, or higher reasons. When a mother’s unborn babies have been ripped away from her, no reason could ever make it right.

She wasn’t in the headspace to feel better or think of a brighter future, she simply wanted to be acknowledged for the pain she was going through now, but no one had remained with her in the pain. They had all tried to make her feel better, which only made her feel worse.

In our own discomfort of feeling painful emotions, we try to help others not feel theirs. It’s difficult for us to see someone we love suffering, and naturally, our first impulse is to try to make it go away, whether it’s through reason, logic, distraction, faith or any other means. 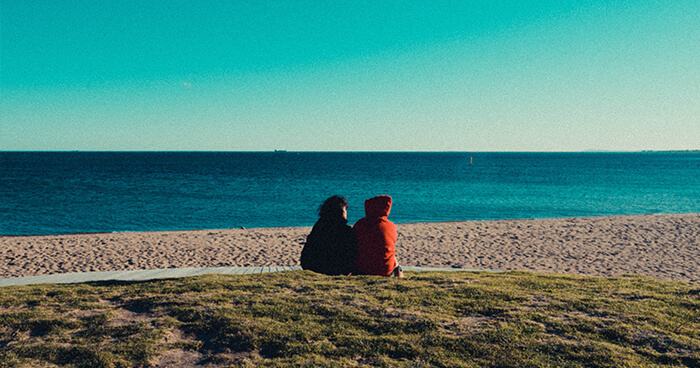 When you can’t look on the bright side, I will sit with you in the dark. ~ Unknown. Image: Kevin Laminto

We feel helpless, so we desperately reach for what we know, what we’ve been taught, and what others have done to us in our own moments of suffering. We offer trite words that deep down we know won’t help but we hold onto the hope that they will anyway because we don’t know what else to say or do.

The more powerful choice is to simply be with someone, accepting and embracing the painful moment as is, without trying to fix or make it better. It goes against our natural urge to want to help, but often, this present moment acceptance of the deep emotions flowing through a person is exactly what they need to help them move through it, in their own time.

As powerful as it is to shine a light for someone who’s ready to emerge, it is equally powerful to sit with them in the darkness until they’re ready.

After the session, Jen told me she felt relief for the first time since it happened, as if a weight had been lifted from her. She hadn’t realized it, but with each client, friend, and loved one who tried to make her feel better, she felt a mounting sense of pressure to feel better, as if there was something even more wrong with her for not being able to.

She hadn’t been conscious of the constant pressure until it was gone, in our session, when she was finally allowed to feel exactly as she’d been feeling and was fully accepted in her pain.

Stepping out into the hallway and turning back for a long melting hug, I sensed the profound shift in her energy, vastly different from when I had walked in an hour ago. She was still wounded but there was an element of acceptance in her pain, a faint glow of light within the darkness.

This sacred, healing light only comes as a result of fully embracing the darkness. It can’t be forced, manipulated, or pushed into existence.

This is the true power of accepting our own deep pain and sitting with someone in the dark as they feel theirs.

Empathy does come from being present, not deflecting. Your description of presence is very moving. Thank you.

Thank you so much this has helped me personally and am thankful that it will enable me to help others in the future, bless you.

Thanks for sharing your experience. This story brought home what I have been trying to understand when people say to be with someone in their grief.

Thanks for sharing this experience. Just being there to recognise the pain when people need support without judgement or the desire to fix the problem is a wonderful gift.
Learning to do so is part of “the Samaritans” training, in preparation for helping such individuals on a daily basis.

Very nice article, enjoyed the read.
That quote is not unknown though “when you cannot look on the bright side, I will sit with you in the dark” was said by the Mad Hatter in Alice in Wonderland

Beautiful thank you for sharing, a lesson many could stand to learn.

Beautifully written, I need this right now. thank u

Thank you. I am so glad that I found this site.

This was exactly what I needed to hear! Thank you! I have a question. As you sit with the pain of others, how do you release it from within yourself When you are no longer with that person? I am very empathic and that part is hard for me. Can you direct me to another article? I know as I get older, more and more people around me will be aging and suffering too so this is so important for me to learn. I want to help but i am prone towards depression and feeling overwhelmed.

I appreciated this article and enjoyed the photos too. I lost my 26 year old son two years ago and totally can relate to this. Thank you.

Very nicely written. This is the way everyone should act especialy with post traumatic injury survivors, the eldrerly. We are sooo isolated, feeling as if the whole world is abandoning us in our greatest time of need and vulnerability.

I wish you were with me, Tree, to validate me in such an authentic compassionate way. Bless you!

Such a gift for you to let yourself cry for and with her. ??

Absolutely beautiful – thank you!!! I find it often so difficult to sit with such great pains (one’s own and others’). Thank you for sharing how it can be done and what can happen when you do… so powerful!