What a piece of work is man! How noble in reason!
How infinite in faculty! In form and moving how express and admirable!
In action how like an angel! In apprehension how like a god!
The beauty of the world! The paragon of animals!
– William Shakespeare, Hamlet

The human species may not be the paragon of animals as Hamlet so eloquently described to us. There is another group of species on this Earth perhaps more deserving of such lofty praise.

It is ironic that science, in its pursuit of knowledge, may soon lead us to understand that we are not what we believe or desire ourselves to be, that we are not the most knowledgeable life-form on the planet. Biological science is provoking us to shatter our image of human superiority. Confronted with new realities, we may be forced to change our perceptions. For the first time in our history, a small group of scientists stands on the threshold of communicating with a non-human intelligence. Probing the oceans instead of deep space, they are searching for an alternative terrestrial intelligence. (ATI) 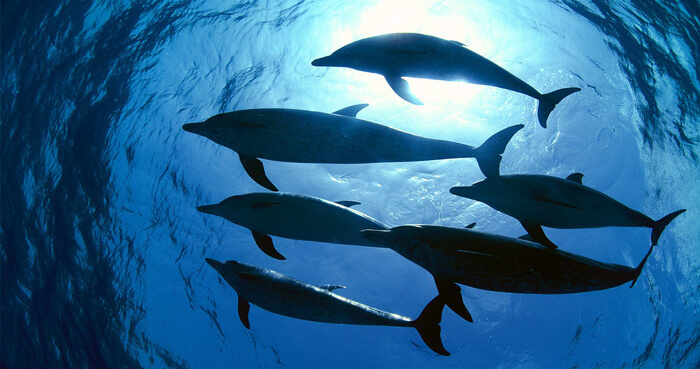 Evidence pointing to the profound intelligence of the cetacean brain

Astronomers devoted to SETI (Search for Extraterrestrial Intelligence) keep our collective inquisitive ears tuned for signs of sentience from space. At the same time, cetologists observe, document, and decipher evidence that points to a profound intelligence dwelling in the oceans. It is an intelligence that predates our own evolution as intelligent primates by millions of years. Furthermore, it is an intelligence that may prove to be far superior to us in terms of complex associative, linguistic, and survival abilities. Dr. John Ford’s patient monitoring of the speech of orcas off British Columbia has revealed distinctive dialects between orca populations, so distinctive that it is possible to link a captive animal of unknown origin with its long-lost family in the wild. In the cold waters off Patagonia, Dr. Roger Payne thrilled the world with his recordings of the songs of the humpback whale. Behind the aesthetic value of whale music, Payne’s research has revealed fascinating insights into the complex and highly sophisticated language of whales.

Limited by our own knowledge

In the realm of zoological study, no other family of species has had such a profound impact upon human researchers. A few brilliant researchers have even been accused of losing their scientific objectivity simply because their study of cetaceans revealed knowledge about themselves. “You see,” wrote Dr. John Lilly, “what I found after twelve years of work with dolphins is that the limits are not in them, the limits are in us. So I had to go away and find out, who am I? What’s this all about?” Dr. Paul Spong, who came to the study of cetology as a psychologist, found himself transformed into a devout advocate of dolphin freedom. “I came to the realization,” says Spong, “that at the same time I was manipulating their (orca) behavior, they were manipulating my behavior. At the same time I was studying them and performing experiments on them, they were studying me and performing experiments on me.” Both men have taken to heart an advice: eloquently expressed by novelist Edward Abbey that,

It’s not enough to understand the natural world, the point is to defend and preserve it.

Other scientists have told me that they understand this effect that cetaceans have on people and resist the tendency to become “involved” with their subjects only from fear of ridicule from other scientists. Knowing something is so does not mean that others will accept it or even be open-minded enough to ponder it. Some things are just not on the table for serious scientific debate, and the idea that humans are subordinate in intelligence to another species is one of them.

THIS IS AN EXCERPT FROM AN ESSAY BY CAPTAIN PAUL WATSON