The Art of Being Connected

Several years ago I was working on the screenplay of a large film project. During that time, I moved with my family to a small property in the rainforest to incubate the story and script. The project had raised a large chunk of development funding and galvanized an all-star team of storyboard artists, animators and visual effects specialists who were poised to suck up the story into their pre-production machine and take it to the next level. But in order to do this, we needed a story and script (my job). The project was behind schedule when I was brought in, and for me as a writer, the stakes were about as high as they get. My family and I rented a quiet little spot in the hills of northern New South Wales, Australia with the romantic notion of building a creative buffer from the daily pressures of the project in order to write in ‘peace’. But along with the near-deafening sound of cicadas pulsing from the rainforest, the project deadlines began mounting on a daily basis finding their way through my peace buffer into my mind and my writing.

After several months, as we approached a seemingly insurmountable production deadline, I found myself teetering dangerously on the edge of a total creative breakdown. I was hardly ever sleeping, I was absent from my life and I was beginning to feel trapped in this little cabin, like Jack Nicholson in the Shining. I had come into the project feeling inspired and on fire, committed to making a huge difference in the story and the world, but as we came to the eleventh hour of a critical draft I found myself completely locked up. The climax scene was yet to be written and I couldn’t find my way through. I wrote for days, looking for a stroke of genius, but each pass I made on the scene seemed to arrive at a dead end. Finally in the very early hours of my deadline day, out of utter frustration and exhaustion, I pushed myself back from my desk and walked outside.

My bare feet hit the grass and the pre-dawn dew sent a shiver through my body. I took a breath and stopped, surrendering every ounce of effort. In truth, there was nothing left in me to give, so it was an easy decision. I didn’t know what I would do next, but I also knew that what I had been doing wasn’t working; so there was no point in pressing on further. For a moment, I just completely let go and I stood there breathing, taking in the quiet pre-morning sounds of nature around me… feeling what it is like to be completely empty. 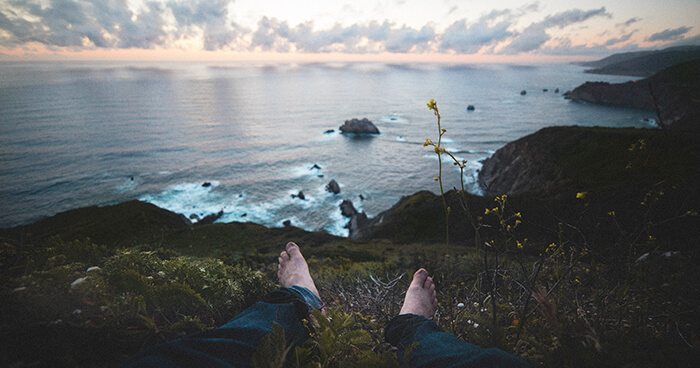 Connecting with nature to connect with self. Image: Kristopher Roller

I’m not sure how much time passed (maybe a couple of minutes, maybe a couple of days–just kidding!) but eventually something started to shift. I felt the grass around my feet growing warm and with it came an opening in my mind and body. I took another breath and the feeling started to grow into an energy that I could literally feel rising up through my body, releasing tension, giving way to a sense of calm. Another couple breaths, I am feeling quite good just standing there doing nothing… and suddenly, out of nowhere, the entire scene I had been working on (unsuccessfully) seemed to land in my mind in a completed form. Lines of dialogue began emerging and subtle twists of character that I had never even remotely conceived of began to crystallize and percolate into form. I stood there watching the scene unfold for as long as I could take it before bolting back into the house and scribbling it down into my journal. Twenty minutes later the scene, which I had literally been working on for weeks, was written in perfectly-drafted form, ready to send. And I, in the process had learned an incredibly powerful lesson about the gift of surrender. Stepping back when we reach a point in any journey where the road appears blocked, and the wall too high to permit our passage.

What Happens When We Stop and Reconnect?

Bharat Mitra and Amir Paiss share their experience of what becomes possible when we stop to connect and remember who we are.

During the 2014 UPLIFT festival, one of the most powerful elements for many participants (and speakers) were the panel discussions in which several individuals of different backgrounds and areas of expertise were brought together to discuss key themes, issues and planetary challenges in a way that would otherwise rarely happen.  One of the most popular sessions was one titled ‘Peaceful Co-existence,’ which featured a handful of our planet’s greatest ‘pilgrims’ of peace–Each person on the panel came with profound experience of overcoming deep personal and/or cultural challenges to walk a path in life that had transcended their apparent circumstance to create an offering or gift of great service for the planet.

Among them, were ORGANIC INDIA and UPLIFT founder, Bharat Mitra. Israeli musician Amir Paiss, Lakota Cultural Specialist Loretta Afraid-of-Bear Cook, former Jain monk, and long-time peace activist Satish Kumar and Choose Love founder Scarlett Lewis. At the climax of the session, a question was posed that has application not only to many cultures and systems of our planet at this time but also to each of us as individuals, walking our own path of purpose and discovery in life.

Asking the Question: “What do we do when we’ve reached our limit and we see no way forward?”

When the path in front of us seems impossible. When we know that doing more or better of what we have already done is not going to get us where we need to go. When we reach that endpoint where everything we know does not add up to the solution we want… what do we do then? Amir Paiss and Bharat Mitra were the first two to answer the question. Their responses (shared in the below video) powerfully articulated my own experience with writing, and describe in a personal and global sense a place we must each come on our own path of true connection and expression in whatever form in life. Watch the video below for their responses.

What do I do first? I stop. It doesn’t mean I stop the movement that I am in, but I stop the mode in which I am operating. I’m stopping, and I am remembering who I am. – Amir Paiss

Bharat Mitra and Amir Paiss: The Art of Being Connected

The only significant change happens when are acting from being connected. When we are available for consciousness itself to be present and to inform our action. Just from being present, the direct experience of every single one of us is of interconnectedness and Oneness. And from Oneness, our actions are in tune and in harmony.  It’s not a decision that we need, it’s not an agenda that we need to carry, it is the most effortless expression of who we are. – Bharat Mitra

0
Reply
View Replies (1)
PrevPreviousWhat is the Collective Field and Why Does it Matter?
NextHow an Apple Tree Transformed my LifeNext