The Ancient Yogic Secret to Happiness

BY Dr Mithu Storoni
Welcome to UPLIFT
The Ancient Yogic Secret to Happiness
Yoga Philosophy, Our Brains, and the Pursuit of Happiness.

Millenia ago, as ancient Vedic tribes roamed across India, paying their respects to Indra, Agni, Ushas and Asvins – the agents of Nature, delivering thunder and lightning, storm and fire, sunrise and sunset – scholars pondered the riddle of life and death and the peculiarity of pleasure and pain. They realised that happiness could never be permanently guaranteed in the general humdrum of civilized life. People become happy if they can escape a situation, or a set of circumstances, that make them unhappy, but there is no guarantee of never being in an unpleasant situation again. Happiness when reached, is temporary and fleeting. In order to detach from the miseries of everyday existence and reach a state of permanent ‘happiness,’ it may be necessary to rise above the daily drama of life. The scholars noted that the pursuit of knowledge seemed to be the only reliable path to ‘happiness’.

These ideas eventually formed part of Sāṅkhya, a school of Hindu philosophy that arose sometime during the 1st millennium BC.

Suffering the torment of (threefold) misery prompts the desire to know how it can be prevented. Visible remedies are unable to guarantee definite and everlasting relief. – Sāṅkhya Kārikā I

The Three Gunas of Yogic Psychology.

Through the careful observation of human psychology, perception and behaviour, the Hindu scholars decided that our ‘experience’ of life is largely the result of how it is expressed by the three ‘gunas’ of our material existence. Although difficult to translate from their Sanskrit meaning, gunas are the three ‘qualities’ of the material of our existence, ‘Prakriti’. 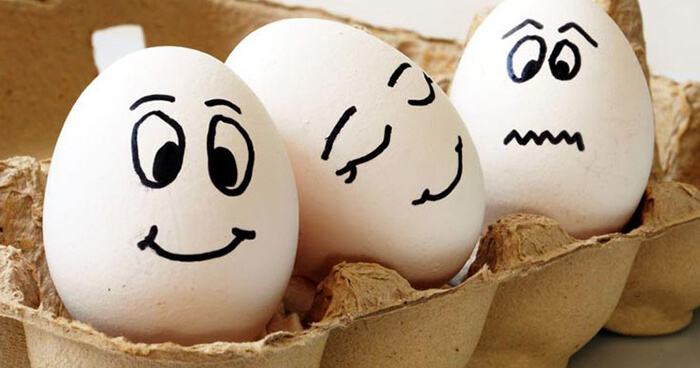 According to Sāṅkhya*, what we assume to be reality is, in fact, little more than an illusory representation of reality, through the behaviour of these three gunas and through effects on sensations, attention, perception, intellect and the ego. When we are miserable, it may be on account of all of these being unbalanced, and not necessarily because reality really is miserable. The actual reality of life lies somewhere in the abyss of imperceptibility; evading our powers of direct perception. We come closest to it when we train ourselves to bring everything into balance.

The three gunas are sattva or intelligence/steadiness, rajas or passion/action and tamas or darkness/destruction/chaos. Sāṅkhya implies that it is when the sattva state is strong, and in overall control of the two other states, that our awareness of reality is likely to lie as close as possible to true reality. Ignorance lies behind suffering and sadness. Recognizing that the material medium of existence (Prakriti) is a separate entity from the reality that is invisible (Purusha), through empowering the sattva state, frees us from unhappiness.

Three Departments of Our Brains.

We know today that our brains have, among others, three large ‘departments’ that enable us to navigate through life. These centre around the prefrontal cortex, the amygdala, and the reward pathways. The reward pathways help lead us toward an action, prefrontal cortical circuits enable focus, calmness and engagement within a task, and when our emotional circuits are activated in the amygdala, they can trigger negativity, fear and anger, and can distract our attention from the task. These three departments interact with each other and need to be in harmony in order for our minds to work well. 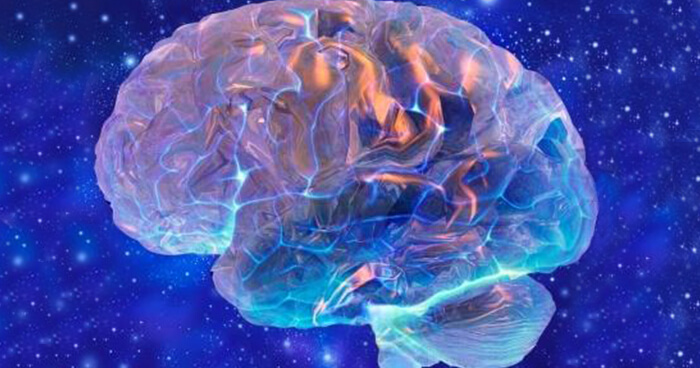 If all parts of our brain are harmonious, we experience more peace.

An imbalance can distort our experience of the world around us. We know that in stress, there may be an increase in activity within amygdala circuitry, triggering anxiety, fear and negative thoughts, distorting reality with a negative bias. In some cases of depression, there may be reduced activity within the reward pathways, numbing our enthusiasm and desire to do things and to live. We know that chess players, musicians, yogis, tightrope walkers, meditators and others who have perfect self-control have well-trained prefrontal cortices and are often in a state of tranquillity and ‘happiness’. The world can take on a completely different hue if we are in a state of intense emotional turmoil compared to when we are in pursuit of instant gratification or in a state of perfect focus and ‘flow’.

(Research shows that serotonin has a powerful effect on the brain, read more about this here)

The Link Between Our Brains and The Gunas.

Although what we know about the brain today was unknown in the 1st millennium BC, it is interesting that by some stretch of the imagination, the three gunas almost reflect the three departments within the brain. Sattva, the prefrontal cortex, responsible for focus, self-control, higher thought and logic. Rajas, the reward pathways responsible for motivation and action. And tamas, the emotional pathways (amygdala), responsible for negative emotions and chaos. Rajas and tamas may also refer to components of the emotional and reward pathways, respectively. 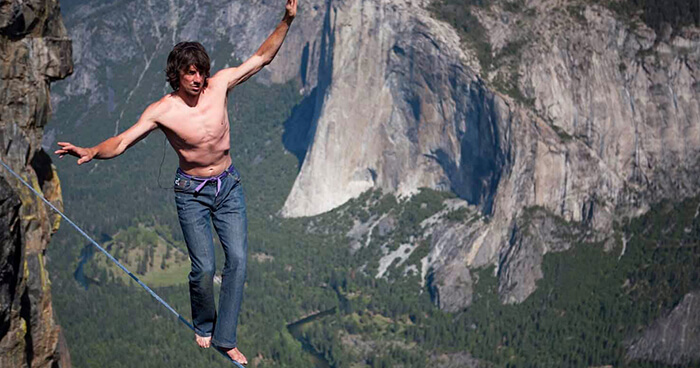 The ancient Hindu scholars devising the Sāṅkhya system did not just describe how an imbalance gives rise to flawed knowledge. They also invented a method for training oneself to restore balance, in order to prevent flawed knowledge. This method was yoga.

Original Yoga philosophy – before Patanjali’s Sutras – is thought to have been the dance partner to Sāṅkhya. Where Sāṅkhya was the theory, Yoga was the practice. Yoga philosophy was almost like an instruction manual for how to train the mind in order to keep the three gunas in balance and encourage the sattva state.
[signupbanner]
We know that focused attention meditation, and regulation of the breath, both central components of hatha yoga practice, improve imbalances in the autonomic nervous system; the system that instigates our stress response. There is brain scan evidence of focused attention meditation changing activity within the dorsolateral prefrontal cortex. The process of self-control, another key part of hatha yoga practice in stillness, relies on activity in the prefrontal cortex, and the modulation and suppression of emotional distractions and instant gratification, triggered by the emotional and reward brain pathways.

The Sāṅkhya system of philosophy was based on logic, and its rational approach insisted that knowledge is acquired from only three valid channels: perception, inference and testimony from a reliable source. In a way, some of the approaches to logic and reasoning in the Sāṅkhya system, would not appear vastly out of place in modern day scientific methodology, and Sāṅkhya principles formed the basis of much of the ‘science of the day’, such as Ayurveda. According to Sāṅkhya, freedom from misery, i.e., happiness, arises from acquiring knowledge and from strictly adhering to proven, rather than unproven, beliefs.

The gunas are only one thread in the complex tapestry of Sāṅkhya philosophy, which is filled with explorations of logic, proof, perception, ego, intellect, inference, existence and truth. 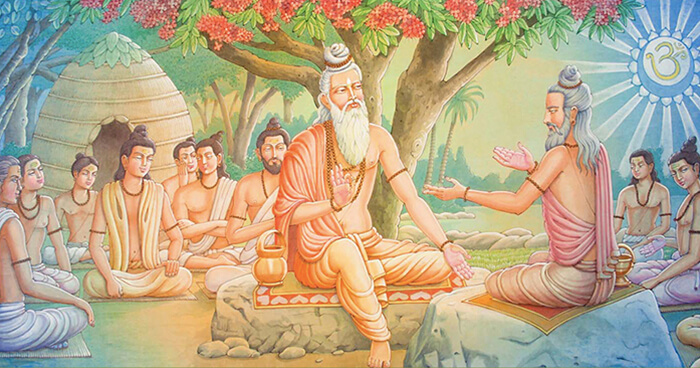 Sāṅkhya philosophy focused more on knowledge than ‘higher being’

Sāṅkhya and Yoga were two of the six systems of ancient Hindu philosophy that accepted the Vedas as a reliable source of knowledge (known as ‘Āstikā’). They were separate from the ‘Nāstika’ systems of Indian philosophy, such as Buddhism and Jainism. Sāṅkhya is thought to have been the dominant school of thought in Hinduism towards the end of the 1st millennium BC.

Unusually, perhaps because of its emphasis on knowledge rather than on the idea of a ‘higher being’, Sāṅkhya is regarded by some scholars as an atheist philosophy. Its ideas appeared in the Śvetāśvatara Upanishad and within the Mahabharata. When Patanjali later recorded the Yoga Sutras, there was an incorporation of the idea of a ‘higher being’, perhaps reflecting the belief systems that dominated India during his time.

The Pursuit of Happiness.

As we enter the year 2017 in our industrialized age, it is humbling to know that millennia ago, before technology, globalization and industrialization, our need for everlasting happiness was just as potent as it is today. The pursuit of happiness makes us human and binds all of humanity together; regardless of the passage of time and of divisions and differences we have brought upon ourselves. Over 2000 years ago, yoga was invented as a tool for acquiring knowledge as a means to become happier. As yoga continues to grow and evolve today, it may be worth remembering that yoga is no less powerful a tool for happiness today, as it was millennia ago. 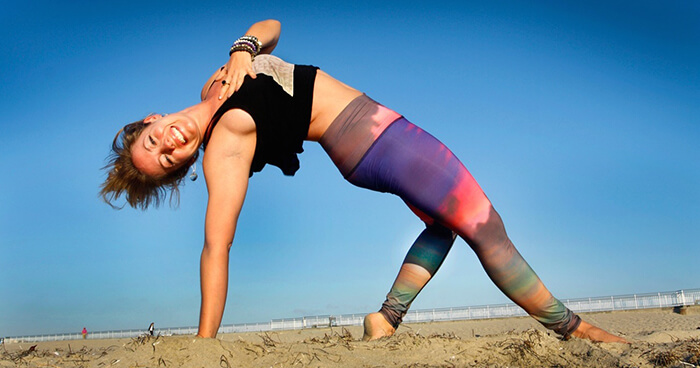 Still today, yoga – in all its forms – is a powerful tool for acheiving happiness.

*Please note a full exploration of Sāṅkhya lies beyond the scope of this article. This article presents only a handful of concepts of Sāṅkhya for the reader’s interest. Please note also that owing to its antiquity, interpretations of Sāṅkhya can sometimes differ from one source to another.

Dr. Mithu Storoni is an author, medical doctor, scientist and yoga teacher. Her book, ‘Stress-Proof’ published by Penguin Random House is out in August 2017.

Find our How to Release the Stress in Our Bodies here.

Great article. This knowledge should be part of any psychology and philosophy course to prevent such a biased ethnocentric approach. In my two Masters Degrees ( one in psychology) at well thought of British universities the scientific study of these disciplines started only with the usual psychologists and philosophers – because they were ‘scientific.’ Ancient cultures have studied these things and have so much to offer. Western based education perpetuates white supremacy.

Yaksha: Who is truly happy?
Yudhisthira: One who cooks his own food (is not dependant on anyone), is not a debtor (does not spend more than he can afford), does not have to leave home in order to earn his livelihood (does not over endeavor for material things) is truly happy. [MahaBharat]

An excellent, informative and enlightening read. Thank you for taking the time to share.

An excellent article touching upon a complex philosophy. The three Gunas really help provide a basis and foundation to explain the yogic way of life.