The Ancient Hopi Message about Water

Water sustains all life. Her songs begin in the tiniest of raindrops, transform to flowing rivers, travel to majestic oceans and thundering clouds and back to earth again. When water is threatened, all living things are threatened. – Indigenous Declaration on Water, 2001

The Hopi have kept their ancient instructions from Creator, they hold a great wisdom and connection with nature. They are innovators who grow many things in the Arizona desert and experts in ritual to call forth rain to water their crops. Their connection to water is very sacred and intimate.  So it is no surprise that in early 2006 Japanese scientist, Masaru Emoto visited the Hopi Mesas in Northern Arizona to make a presentation about his work.

Emoto has done ground-breaking research with water which imply that water is conscious and receptive to human energy/intention, that it has intelligence and wisdom. Since we humans are made primarily of water, our relationship with it is central to our relationship with our own selves. The Hopi believe that being in harmony with nature is vital to life itself and this is reflected by the symbols used in their dances, rituals, art and jewellry. Water may be symbolized as turtles, frogs, clouds, lightning, rain and waves.

The aquifiers breathe in rain and snow and breathe it out. The springs are the breathing holes. Humankind is a participant in water-life. Mankind’s thoughts influence whether the rain and snow comes. – Hopi Elder Vernon Masayesva 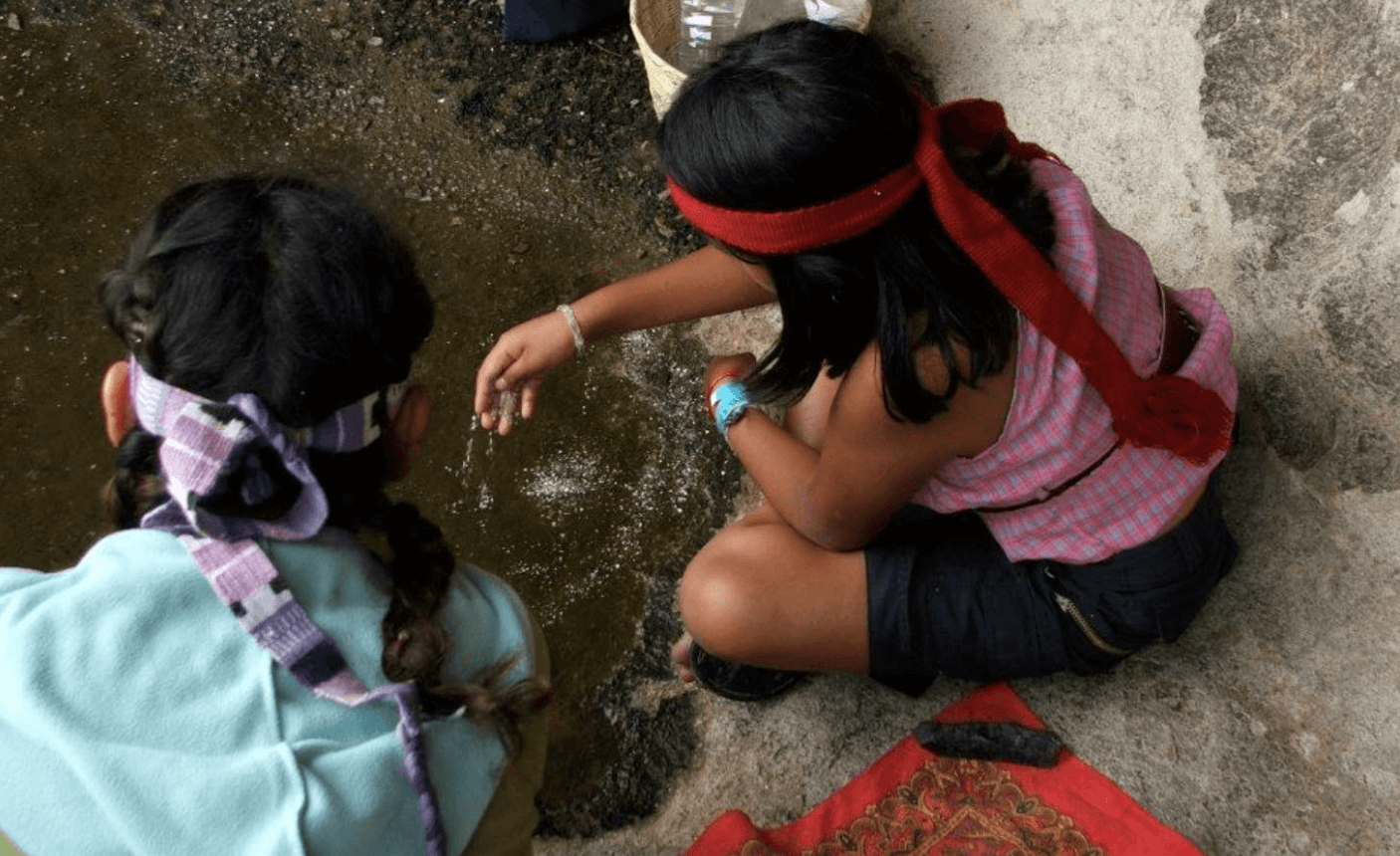 A Water Movement is Born

Hopi are one of the oldest remaining ancient cultures in North America, known by many as Tibet of the West. Living in the arid Painted Desert where rainfall is minimum, the Hopi have perfected the art of creating thriving gardens known as dry farming. Their rich cultural traditions, dances, and spiritual practices give them a very special relationship with the finite resource of water. Hopi believe that we are all related to the clouds (clouds are our relatives) and if no rains come it is because we are spiritually out of harmony.
[signupbanner]
Hopi celebrated Emoto and his wisdom. Many elders have said that they always knew science would one day validate and prove what Hopi have known regarding water. This beautiful coming together of individuals from different cultures and disciplines to reach the same understanding is significant on many levels. Some call it prophecy while others call it a much needed collaboration between ancient indigenous and modern wisdom.

You see that sun rising? Sing songs to it, make your prayers, be present and give thanks. If you do that every day you will be alive, you will have lived life and it won’t matter if the world ends tomorrow or what the prophecies have said because you will have lived today. -Morgan Saufkie, Hopi Elder

When word of this event spread across the world, an idea was born. A call was made to tribes and communities everywhere to send water from their local springs, rivers, wells to Hopi to combine the waters of the world. Hopi gathered this water and poured it into gourds which are traditionally used to carry water. A combining of the waters is a combining of the prayers for healing from people everywhere. 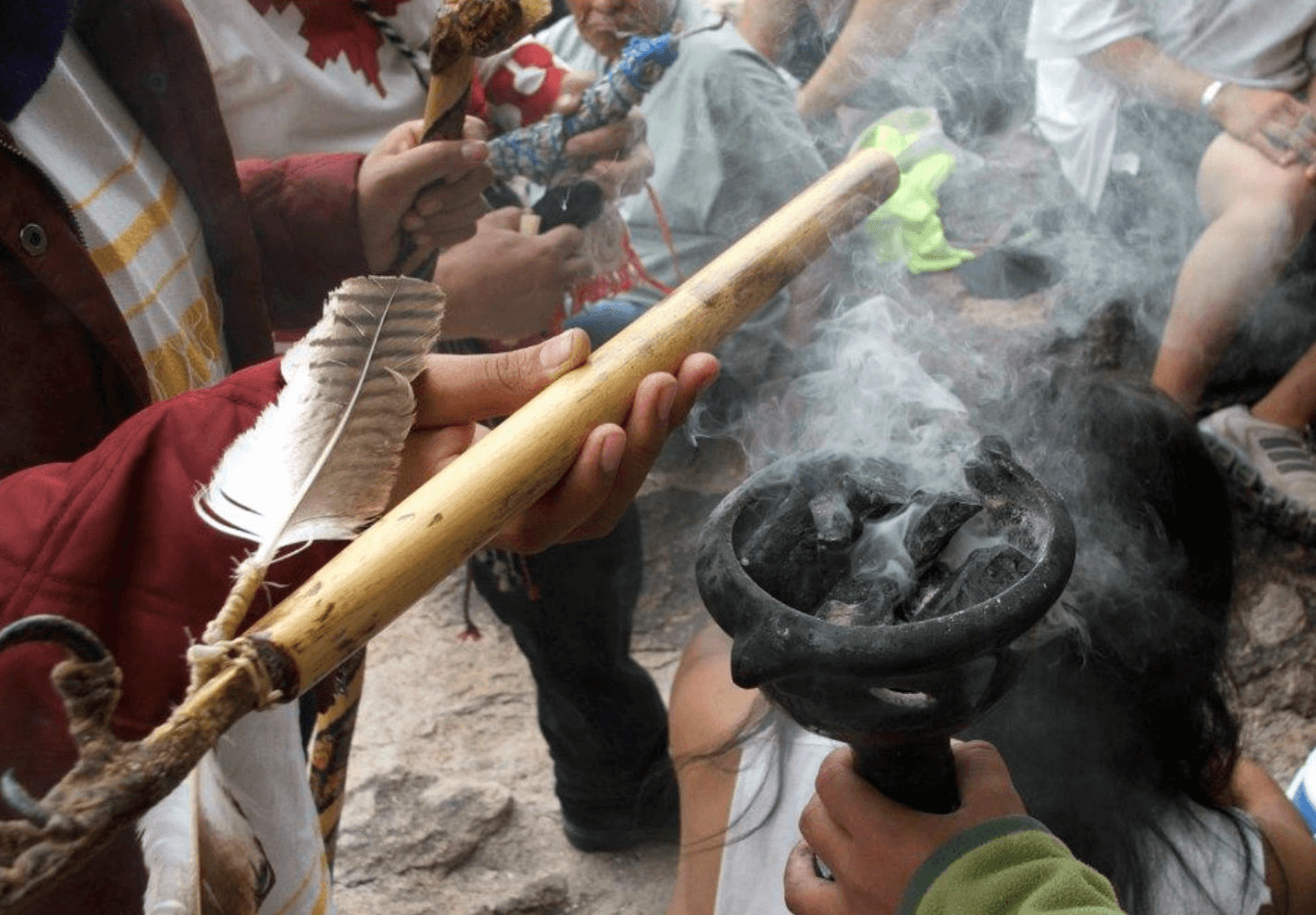 The Sacred Staff being Blessed in Ceremony

With the world waters in gourds, the Hopi began a historic run from Northern Arizona to Mexico City. Running is a traditional form of prayer for Hopi, who believe that the pounding of their feet on the ground sends prayers into the heart of Mother Earth. Mexico City was hosting the World Water Forum, but it was being sponsored by corporations that aimed to profit off of the privatization and sale of bottled water.

Hopi planned to bring a different message of indigenous people from all over the world. It is a simple message, that Water is Life. Their message was a warning that profiteering from water while many don’t even have access to clean water for drinking or hygiene will not be accepted. This message would be delivered in a beautiful way, with respect in a sacred manner and from representatives of the most ancient people on the planet.

Not surprisingly, the Hopi Runners were seen as activists and were turned away from the World Water Forum. Something unexpected happened though upon their arrival in Mexico City… Indigenous chiefs from across Mexico had assembled in full regalia to welcome them! Unbeknownst to the Hopi, all of the local tribes had kept stories and prophecies for generations that these runners with a message of water were fulfilling.

When the Eagle returns from the north and dances at The Pyramid of the Sun, the world will be ready for the medicine of healing that we have kept alive for centuries. -Local Prophecy

Beneath an ancient megalith of Tlaloc, The Aztec God of rain and water that has been moved to the centre of Mexico City from its original home at The Pyramid of The Sun, the tribes gathered in ceremony and prayer. On that day, The Hopi were invited to bring Eagle Dancers to the foot of The Pyramid of The Sun on Spring Equinox to fulfill a 500 year prophecy from the time of Montezuma. On Spring Equinox of 2006, the people of central America welcomed the ceremonial and symbolic return of The Eagle signifying the beginning of a great time of change, healing, purification, and ultimately peace for the whole world.

The Maya are known as The Keepers of The Ancient Flame, The Lords of Time (also known to Ancient Celts as The Vanir). This milestone also represented an aspect of healing of the 500 year-old wound since the arrival of Columbus, a time when native people would no longer need to hide their ancient knowledge from the world. Thus heralding a time when the world is ready to listen to the ancient wisdom of the original people of this land is upon us. That time is now.

Central to Hopi belief is that water is the chief of the elements. Perhaps its time we started to think with our hearts, and return to the natural way to ensure our survival.

The two videos above were directed by tribal elders and shot by youth media-creators. Every aspect of what is emerging combines the highest aspirations of many diverse cultures and individuals from all ages. Evolution is not a spectator sport. Get involved and participate, spread the word through your own social networks. Some stories are told, others are meant to be lived. Join us for a global campaign to heal the waters of the world at Bless the Water.

To learn more about this project, please visit here. Very Special thanks to Brian Hardin and Allison Fast for video footage.

Feature image: Final Panel, Journey of the Human Spirit by Michael Kabotie and Delbridge Honanie – “The Hopi Water Serpent returns to teach the brother/sister twins the responsible truths necessary to unify all humankind”

Register now for Bless The Water and watch the free online premiere on March 22 of the new UPLIFT film, The Voice of Water, featuring indigenous leaders, water experts and representatives from the international legal battle for the rights of water.

Great! In Hinduism the religion is cursed to be water!!

I am humbled and in awe and gratitude that these native people hold to their truth and I am truly grateful for their commitment and showing us the way. All things are connected and all is Sacred.

Especially after 2 trips to Standing Rock, this brought joy to my heart and tears to my eyes

We may not be able to change the current system as it doesn’t allow for such things. But why do we wait for it to change? By now it is obvious the world will burn rather than substantial change take place. But we who are for living in harmony with mother earth, must surely be drawn to “do out own thing” now? There are enough of us. What are we going to do – wait till the ones who did this will reform? Waiting is not an option. Neither is waiting for a savior. Waiting for a savior is admitting you still think yourself as a child and are waiting for someone whom you think is more powerful than you to rescue you. It’s a childish syndrome and time to snap out of it. We are all equal. Some may have less intelligence, some may look different and some make be highly genius – doesn’t matter – every one of us is here to experience our own story one that we are the authors of. If you don’t believe that then you are allowing others to write your story. Everything is a program. But we are the programmers at least of our own bodies. Our bodies are our spacecraft. Some connectors have been tampered with. We create our reality and w have been subjugated since the beginning of history to create a reality that suits those who you have abrogated authority to. These “authorities” are destroying the earth and its peoples. There are many simple solutions and that is stop buying things is number one. Actually getting healthy is number one because without that you’re nothing. Disengage from this system even though it may seem inconvenient at first. You’ll get the hang of it and you will learn many things. What you put your attention to grows. So stop worrying about this stupid system that we’ve got and put your attention and energy into building something new. Look around, there is much going on. And choose something or a few somethings. And let’s make our lives beautifully simple and exciting. What we have now is stagnation. We need inspiration to fuel us forward.

I just wish people would focus on what they are going to do today. It does not matter how long my ancestors have or have not been here. What is important is what actions I take to make this existance and this planet a better place for the future. I choose plants, caring for them on public property since the city is remiss….and picking up trash daily on my walks. I try to may my neighborhood a cleaner and safer place and I respect my multi-cultural neighbors. When I travel abroad, I try to be the best representative of my country, the USA, as possible. There are enough people who destroy, we need people to walk a walk no matter how small.

When I was young 1940s the old people of that era performed rituals with water and say karakia, especialy after important or negative happenings.all hapu had their own stream or creek. Maori of New Zealand use to have the same spiritual respect for water as our Native American brothers have. Today the NZ Govt allows 1080 to be used on papatuanuku [earth and water] the same govt produced and used Agent Orange? “Stand up for our Rights”

My people have been here since the early 1600s, actually driven from our native Celtic lands!
I think, now, however, we had best listen to the ancient ones, and start practicing things as the Indians do—
That should help our land heal as we remove all foreign matter!

My family has been in the US since the early 1700’s this great nation is the only home I know. These people have much wisdom to share with the world. It is a shame that a few people are so willing to take what is God given to all the children of Earth and now charge for what was given freely and is needed to sustain life. They do not have this right.

The Vanir are Nordic , not Celtic.