The Alchemy of Inner Peace

The Taoist appeal for the rediscovery of an unspoiled inner Self satisfies timeless human longings: shedding burdens, feeling whole, being connected.

Different from conventional Western anatomy, Eastern views of the human organism include an energetic metabolism, which sustains human vital functions on a subtle level. Depictions and names of energy ‘organs’ vary from tradition to tradition, but they share the vision that vital energy flows through centers and conduits in and around the human physical body.

Just like breathing happens automatically, we don’t need to do anything to make energy flow through us. However, we can choose to cultivate and optimize our energetic state, be it to improve our wellbeing or to evolve spiritually. Energy work can heal us, if we understand healing as becoming whole; becoming one with ourselves, and expressing this through our material lives. 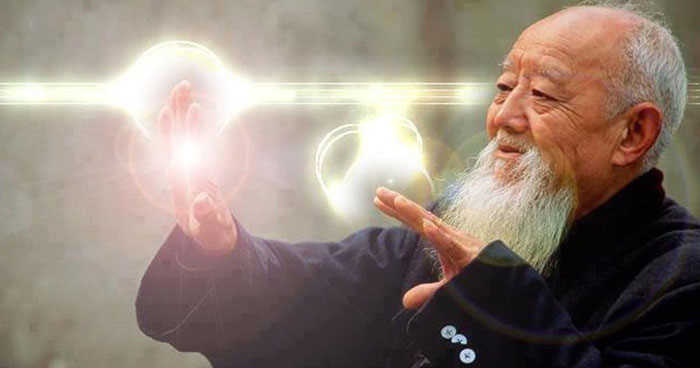 Energy flows through centers in and around the physical human body.

Everybody already owns the raw materials for wholeness. We are, inherently, whole. Trauma, conflict, and other hurtful experiences may have encrusted our naturally intact core, but we can recover it. Doing so is an alchemical process.

Alchemy is an ancient precursor of the natural sciences, standing with one foot in the realm of magic and mysticism, and touching on chemistry and physics with the other. One tenet of alchemy is that by combining and refining lesser elements, ever more precious substances can be distilled.

Healing and self-completion, too, are alchemy–we work with our inner resources until we uncover our true Self. Through energy work, we can transmute darkness into light, and corruption into purity. Virtually all techniques of self-transcendence, even if they don’t mention the concept of alchemy, are based on transforming distortions of the Self into connectedness and authenticity. 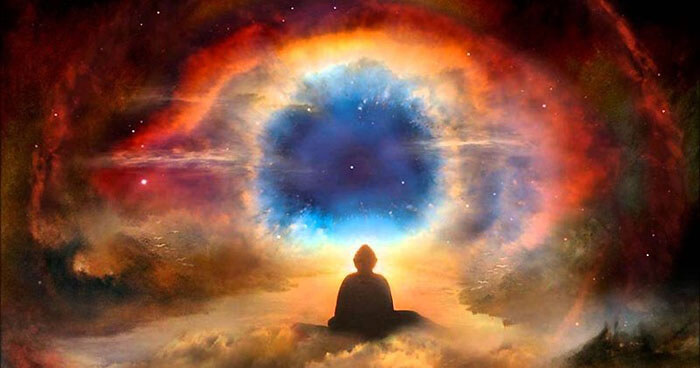 Alchemy is used in Taoism to uncover the true Self that lies within.

Taoist tradition calls internal alchemy neidan. Neidan aims to reunify the individual with the Tao (also Dao)–the immaterial substance facilitating the existence of all things. This union is the centerpiece of Taoist philosophy and religion. At their core, all beings and things are an aspect of the Tao. Self-completing means finding the Tao within and thereby aligning with the greater Tao.

Although it is incorruptible, the inner Tao becomes overlaid by the trappings of socialization, and by our general experience of material reality. Fulfillment comes when we free ourselves from these artifices and regain ziran (original naturalness).

Once we rediscover our simplest, purest Self, our operations within the material world become wuwei (effortless doing), because we harmonize with the Tao. That way, we also enact de (virtue, integrity), and spread Tao into the world through everything we do. 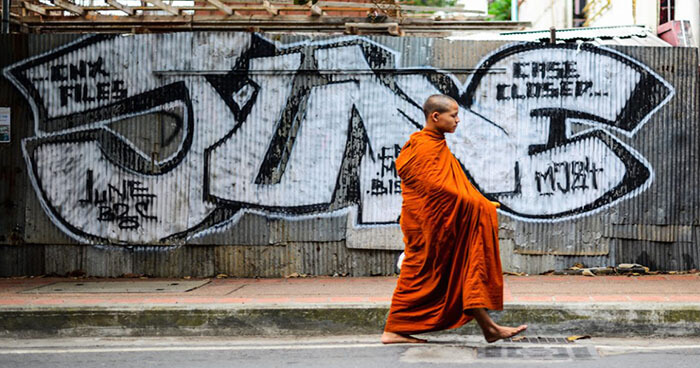 Internal alchemy reunifies the Self with the energy of all things.

Union with the Tao is not reserved for an elite of spiritual seekers. Renouncing worldly life and isolating ourselves on a mountaintop is unnecessary. According to Taoism, Self-completion lies right in front of our nose. The attitude with which we carry out profane activities of daily life can turn anything from serving tea to sweeping the yard, into an act of fulfillment. Recognizing the presence of Tao in everything, and operating in consciousness of this realization, is it. We are always as complete as our experience of the present moment.

Neidan is a meditation-based system meant to help a person unite with the Tao. Just like external alchemy (weidan), internal alchemy requires a firing process, which consists of moving qi (vital energy) through the human energetic metabolism. 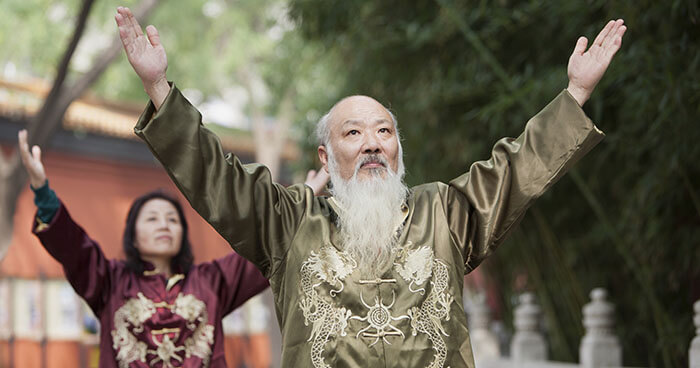 Neidan is a system based on meditation that unifies us with the Tao.

Taoist tradition often refers to anatomical features in metaphor, invoking images of inner landscapes, or likening the human body to the administrative makeup of a state. In Taoist eyes, we contain oceans, mountains, springs, palaces, gates, and so on. This wealth of imagery reflects the idea that microcosm and macrocosm correspond to one another.

“As within, so without” applies to everything, because everything is informed by the same underlying Truth. All things, live or inanimate, are condensed Tao.

Some branches of Taoism also sustain that human anatomical features are the dwellings of inner gods and spirits, whom we can contact through meditation and feed with qi. Given that qi is directed through the body mostly through visualization and breathing, combined breath work and meditation are the main tools of neidan. 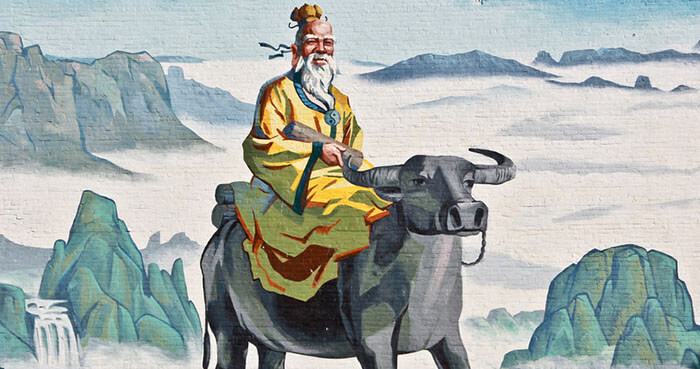 The main tools of neidan are breath work and visualization meditation.

In the 6th Century BCE, Lao Tzu identified breathing techniques as a way to stimulate qi energy. Over the years, two types of breathing exercises were developed: Buddha’s Breath and Daoist’s Breath.

These breathing practices infuse the body with qi and help focus the meditation of neidan. 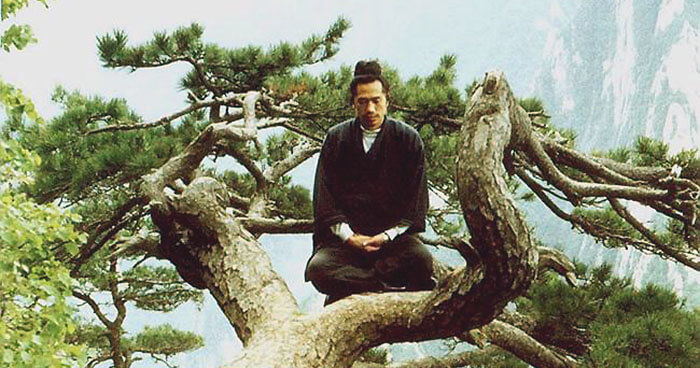 Breathing techniques infuse the body with qi and focus the meditation.

To explain neidan further, let me describe some basics of Taoist energetic anatomy. Humans have three main energy centers, called dantiens (cinnabar fields). The lower one is located in the lower abdomen, the middle one behind the sternum. The upper one, which also houses the third eye, lies behind the eyebrows. Other minor energy points are distributed across the rest of the body.

There are ‘gates’ under the soles of the feet, in the palms of the hands, and at the crown of the head. They serve to expel old qi, and absorb fresh qi into the body. Then, there are ‘vessels’. The three dantiens lie on a vertical energy channel that rises through the center of the body, from the perineum, all the way up to the crown.

Two more channels, the yin-conducting dumai (serving vessel) and the yang-conducting renmai (control vessel), connect perineum and crown as well, only they run over the front and the back of the body. They form an energetic circle called heche (river chariot). Dumai, renmai, and the central channel belong to the eight ‘extraordinary’ vessels. 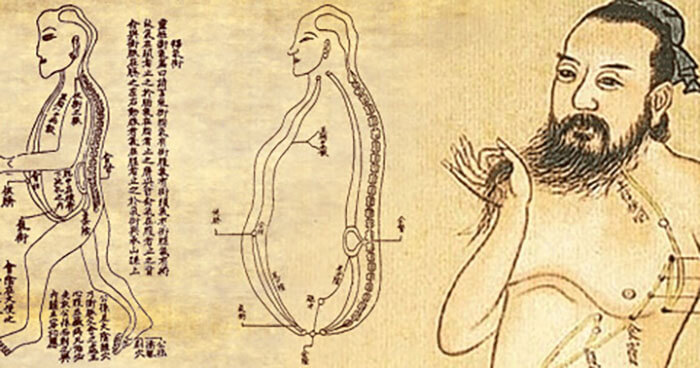 Energy centers create channels in the body where the qi moves through.

The twelve ‘ordinary’ channels are also known as meridians. They are six pairs of yin and yang conducting energy veins, which nourish specific physical organs and areas of the body. All organs, with their respective meridians, are associated to one of the five basic elements of nature: wood, fire, earth, metal, and water. A human being is healthy when qi runs fluidly through all energetic structures. Qi supplies the body and its organs with balanced yin and yang energies. It also ensures that all natural elements within the human being interact harmoniously, meaning none of them becomes deficient or overly dominant.

The Three Phases of Neidan 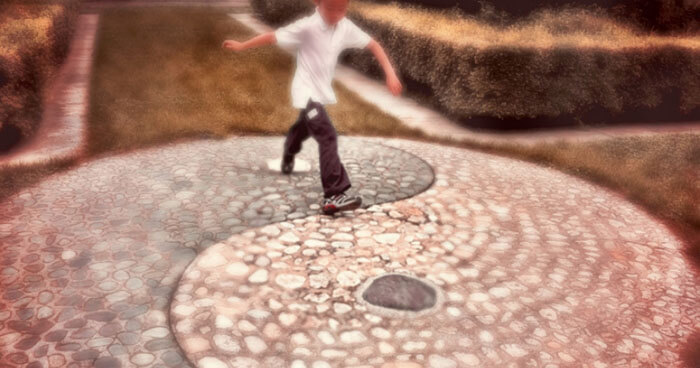 Qi supplies the body and its organs with balanced yin and yang energies.

During the preliminary phase of neidan, the practitioner replenishes their resources of energetic raw material. In other words, he or she gathers fuel for the alchemic firing process.

The practitioner realizes they are one with everything that exists, and with the source of all existence. There are no separations, and becoming aware of this brings enlightenment, bliss, and ease. 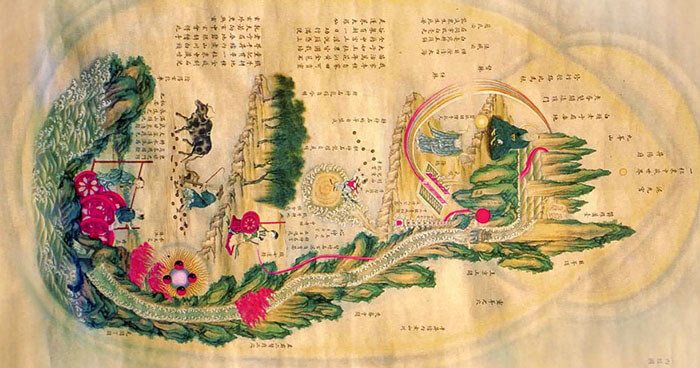 The ancient internal alchemy chart demonstrates how neidan works in the body.

The historic origins of neidan are unclear. In ancient China, the practice of weidan, or alchemy with actual physical elements, started over two thousand years ago. At one point, scholars began transferring some of its concepts to the investigation of human vital functions, and this way, neidan was born.

The oldest surviving text outlining neidan practices is the Cantong qi. Although it has been claimed the Cantong qi was written as early as the 2nd Century CE, no other sources mention its existence until the 7th Century. Hence, dating the Cantong qi exactly, or pinpointing the beginnings of neidan, is impossible.

Neidan is a product of Taoist cosmology, which has also engendered philosophical schools, inspired religious traditions, and defined Chinese medicine. However, the notion that energetic health is the foundation of physical, mental, emotional and spiritual wellbeing, likely predates Taoism. Early forms of energy-based exercises like today’s qi gong, for example, might be over four thousand years old. 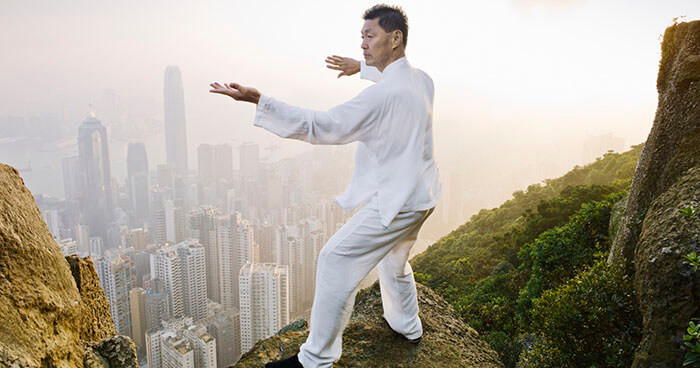 Modern practices such as qigong and tai chi continue the Taoist tradition.

They have branched out into a plethora of techniques combining breath, mental focus, meditation, and physical movement, and are still growing strong. Since the early 20th century, qi gong, tai chi, and other exercises have reached the West, where we can expect them to develop further.

Far from clashing hopelessly with mechanistic Western life sciences, they have opened a new chapter in the exploration of human existence. The Taoist appeal for the rediscovery of an unspoiled inner Self, satisfies timeless human longings: shedding burdens, feeling whole, being connected.

I am a licensed Acupuncturist. Reading this reminds me of the roots of the medicine. Even Acupuncture studies get disconnected from the lovely, powerful visionary Roots of the medicine. I am keeping this writing to use for my clients understanding. My school did not refer back enough to the Taoist Origins. A lot of acupuncture studies are post communism. This beauty and esoteric spiritual thought was scrubbed from the medicine. It is such a sad loss. We need to reconnect. I see this as an injury to modern acupuncture.

One of the best and most concise descriptions on this topic I’ve read.