The 16-year-old Suing the US Government

A small child stood up on stage at a rally and started speaking passionately about the environment. The six-year-old told the crowd: “I shouldn’t be standing up here. It should be the adults that are protecting the planet. But they’re not, so I’m up here.”

Fast forward to a decade later and the same Colorado boy, now a young teen, has launched an astounding lawsuit, where he is holding the US administration accountable for a reckless lack of action over climate change.

Xiuhtezcatl Martinez is one of 21 children and young adults who have joined with climate scientist James Hansen in launching legal action against the US government for failing to cease the use of fossil fuels. In a David and Goliath action, the youth activists have taken on the giants of the oil industry. 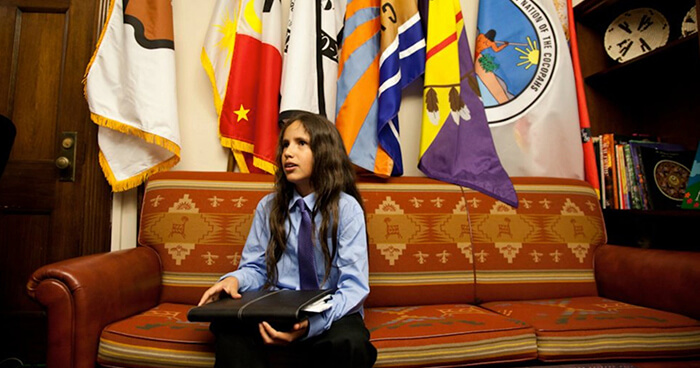 Xiuhtezcatl Martinez began his quest to speak up for our planet at just 6 years of age.

The lawsuit was filed in 2015, with the youth plaintiffs suing the Federal Government for violating their constitutional rights to life, liberty and property. In November, in a remarkable and historic ruling, despite pressure from the US government and the oil companies who attempted to quash the lawsuit, a court ruled that the legal challenge could be upheld. Judge Ann Aiken ruled that a stable climate is a fundamental human right. Her ruling has cleared the way for the case to head to trial and set an incredible precedent where youth can have a voice, and take on multi-billion dollar companies in the federal court.

I have no doubt that the right to a climate system capable of sustaining human life is fundamental to a free and ordered society. Just as marriage is the foundation of the family, a stable climate system is quite literally the foundation of society, without which there would be neither civilization nor progress. … To hold otherwise would be to say that the Constitution affords no protection against a government’s knowing decision to poison the air its citizens breathe or the water its citizens drink. – Judge Ann Aiken

In an interview with UPLIFT, Xiuhtezcatl said he is thrilled by the result. He says it’s inspiring, but they haven’t won yet and need to keep pushing the case forward. “We would like to be able to win in the lawsuit. If we won this lawsuit it would cause the federal courts to force the government to make massive reductions in carbon dioxide emissions. That’s what we’re asking for.” 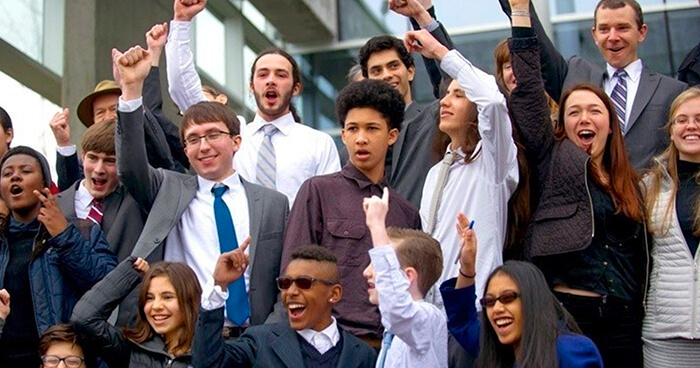 Martinez and the 21 plaintiffs are thrilled at the result so far, but the battle isn’t over yet.

Xiutezcatl outlined the legal process that is now giving these extraordinary young people who range in age from 9 to 20, the right to testify in court, and share the stories of environmental destruction in their own backyards that are negatively impacting each of their young lives and their communities.

“Our standing was written into the Constitution, as well as a legal document called the public trust doctrine. Which says that the resources are to be maintained for the present and future generations. We have a claim that the atmosphere is a very important resource that doesn’t belong to anyone, but it affects every human being on the planet. And our government has a very important responsibility to uphold our constitutional rights, as well as our right to have the atmosphere, which they are failing to do because of their action to create climate change, their inaction to regulate it, and to mitigate it.”

We live in amazing times, the world is changing fast and these millennials are showing up to be a talented, heartfelt and driven group of young people who will not accept the devastation of the environment around them, the unfair systems, and the prejudice of the flawed world we live in today. They are working with current systems to create wholly new paradigms for the future that will benefit us all.

This ruling shows the power the youth have. I think one of the biggest steps that need to be taken and shifts in consciousness, is understanding the power that the younger generation has; to use a voice that hasn’t always been heard in our world, and in a way has always been one of the most powerful voices in the world. We have some of the most intelligent minds amongst our generation.

[signupbanner]
The ruling by Judge Aiken not only validated climate change in a world of vehement climate change denialists, but it gave an extraordinary power to these remarkable young people who now have a fair chance to take on the US government, have their day in court, and hold the government accountable. The hearing will take place in May next year.

Our Children’s Trust Chief Legal Counsel, Julia Olson, who represents the youth plaintiffs, told CNN that president-elect Donald Trump will automatically become a defendant in the case when he assumes power in January 2017. We are up for interesting times, as the case is bound to stir the pot under Trump, who has notoriously referred to climate change as a ‘hoax’. Trump has also threatened to ditch many environmental gains made during Obama’s presidency, including the Paris agreement on climate change. 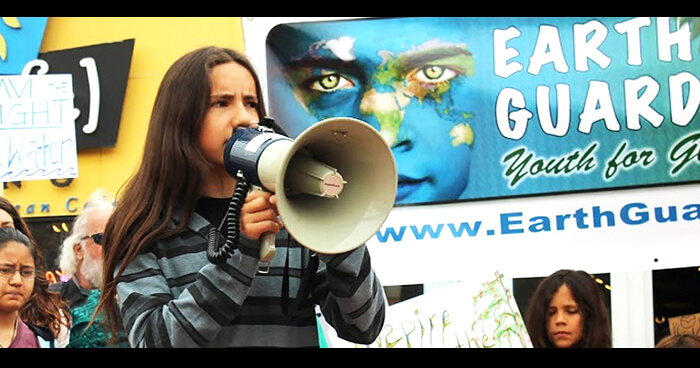 Martinez has passionately spoken at many climate change rallies around the world.

With climate change action in tatters, people are saying that Xiuhtezcatl is the planet’s best hope for our future. This is a lot of pressure and the expectations on the sophomore are enormous. Xiuhtezcatl said he is firmly committed to community action, as this is where global change happens, and that his mission is to empower young people to have a voice.

The indigenous hip-hop artist became a climate change activist at the tender age of six when he saw an environmental documentary. He asked his mother to find a way for him to speak at a rally, and that was it. He began speaking around the world at various environment summits and has addressed the UN assembly many times. His commitment to his mission came out of his great love for the natural world, but also from a very personal well of deep sadness. “I saw the beauty of nature, of different species and different ecosystems thriving. And then I saw that disappearing because of our crimes against the earth … I wanted to pass on a beautiful planet and protect what I loved.”

Today he is the Youth Director of Earth Guardians, an organization of activists, artists and musicians from around the globe, and he gives presentations on fracking and climate change at schools and conferences across America and he uses his musical talent and creativity to deliver his message. “I’m fighting to protect the things that I love by doing what I love.” 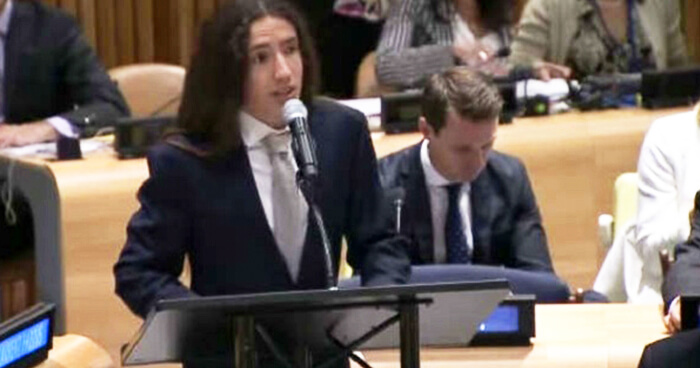 Martinez is an inspiration, courageously addressing the UN at just 15 years of age.

Xiuhtezcatl is a wonderful blend of his father’s Aztec heritage, and his mother’s activism. He is steeped in indigenous teachings and has a rich heritage which began when he was just 6 weeks old when he took part in his first ceremony on the sacred lands of the Black Hills of South Dakota to receive his name. Xiutezcatl says his identity is strongly shaped by the cultural and sacred traditions of his people, and their sacred connection to the earth.

He has always felt that as a human being, it is his responsibility to preserve the Earth for future generations, and this fuels his fire to keep the world safe from corporate greed and wanton destruction. He wants his younger siblings and other children to enjoy the wilds of nature, just like he did. 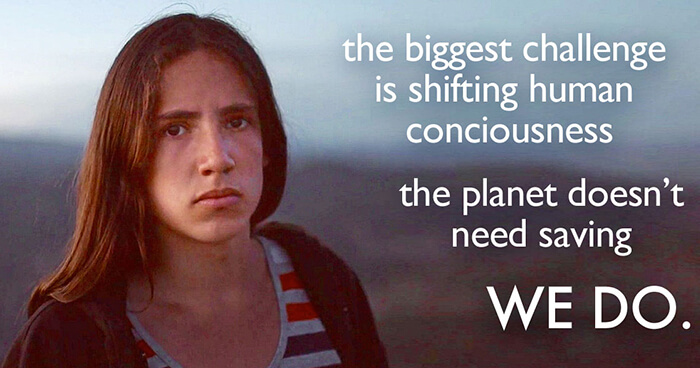 Martinez is an inspiring example of becoming the change we wish to see in the world.

I want to live in a world where people feel empowered to use their voices and speak up for what they believe in. Where people are not treated unfairly for who they are, and where there is more justice and more opportunities for young people to shape their lives, and their destinies, with the paths that they want. A place where we have a healthy education system, a healthy planet, a government that represents the people. Where people are prepared to fight for what they believe in. And a planet where people are empowered to use their voice. – Xiuhtezcatl Martinez

The passionate teen is deeply wise and humble. His most important mission is to encourage other youth to stand up and speak out, and he most certainly does not want to be seen as unique or special. “I want there to be more people in my generation who are fighting to be leaders, and to be those shaping the world who are taking action into their own hands. I do not want to be the only one.”

Politicians have failed to fix the climate crisis, so the youth activists now want the courts to force change. He says it’s up to our generation to save the world.

As the youngest generation, we have the most to lose, therefore, we are at the front lines of this war, fighting for our survival and that of future generations. This resurgence has hit hard, and a youth-led revolution is emerging from the shadow of the ﬁrst environmental movement.

Real change will come from the people, not leaders, or politicians, or governors. It is time that we all join this wave of change for the survival of future generations. We, the youth, are the dominant force on this planet. We are leading the resurgence. – Xiuhtezcatl Martinez

The interesting thing about activists who actually do something, regardless of their source of inspiration, is they have a unique capability to disturb the rest of us who do nothing. This usually results in one of two primary reactions: inspired empathy or unmitigated cynicism. Either way, they have already achieved their objective, they have rattled our cages!

You may have a point but does the tone of you posting have to be so unpleasantly aggressive?

As it is prophesied, the seventh generation will arise and save the land and the people (paraphrased). My prayers are with you as you undertake your historic journey, young man.

No, those nasty fossil fueled electrical power outlets will be powered by clean, renewable wind, solar, geothermal and water. Your nastiness is not appreciated.

What an awesome kid. He’s not alone, there are many people in older generations willing to support and help people like this. Check out http://myweb.digital for example…..

Where can I send my $50 to help this wonderful group of people?