Tales of Wisdom to Guide Our Souls

Have you ever heard a story that touched you deeply? Ever thought about what is being ‘touched’? The heart? The mind? The soul? Most of us have read, watched or been told tales that have had a lasting impression on us, yet we rarely consider the important role they play in our cultural and societal narrative. And as we are caught up in the entertainment value, we probably never think about the soul narrative. How we are being shaped and navigating our soul journey through the art of storytelling and story-listening. Our very beings are vigilant curators of our life’s journey and our soul’s journey. They are, of course, one and the same.

Recently on a trip to Ireland, encounters with two strangers made me reflect on the art of storytelling and just how important it is for both connection and legacy.

I was staring out the window at shades of emerald greenery whooshing passed as the bus I was on delved deeper into the Irish countryside. The bus stopped. A woman entered, muttered something unintelligible to the driver, and took the empty seat next to me.

Though it was an unusually warm day, she wore a large grey trench coat, the hood half pulled over her matching mop of hair. From the collar and sleeves, the trims of at least three more layers poked through. “My, it is hot today, isn’t it?”

Continuing to mutter about the heat, she pulled a can of warm soda out of her bag and insisted I drink. She smelled as though she hadn’t showered in days, yet her jolly nature quickly washed away my distaste. “I’ll surely be at the gates of heaven soon enough and aren’t I annoyed about it. So ye must listen to what I have to say. I must tell ye. I must tell all of ye youngins … but right now, I’ll just tell ye.” 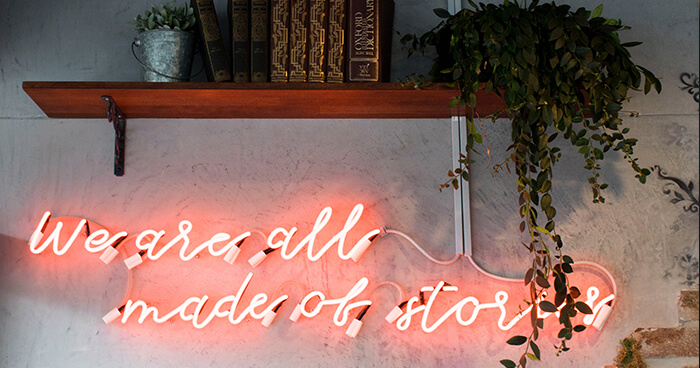 There was no refusing her, and though her thick accent was hard to decipher, her expressive tone and robust gestures made up for the language barrier. She told me tales of love and of despair, of hope and renewal, of war and the peacemaking that followed. And throughout all of it, her humour melted gracefully into tides of tenderness, before gearing up again.

I was completely wrapped in her words and felt a deep connection to people in her stories whom I had never met, some who had been dead years before my birth. I felt their pain and their joy. And I saw myself in her tales. I was the mother who held her dead child yet later found peace in caring for other people’s children. I was the starving farmer whose fears for the future were put to rest after the town’s prayers for the growth of crops were answered. I was a guest celebrating the union of two star-crossed lovers. The landscape out the window stopped just being pretty, it became enriched with history and the consciousness of generations past.

You may tell a tale that takes up residence in someone’s soul, becomes their blood and self and purpose. That tale will move them and drive them and who knows what they might do because of it, because of your words. That is your role, your gift. ― Erin Morgenstern,The Night Circus

This type of oral storytelling is one which traditionally has been at the core of Celtic cultures, along with many others around the world, yet over the years Western society has forgotten the significance of the humble story or the epic tale. As we move through the modern, fast-paced world, many of us no longer have time to sit and listen to the tales of our contemporaries, let alone our elders. As storytelling evolves into new technological platforms it would perhaps be wise to remember the sanctity and purpose of the oral traditions. Our odysseys are moving from analogue to digital mediums but the vitality and cruciality of the message remains the same. 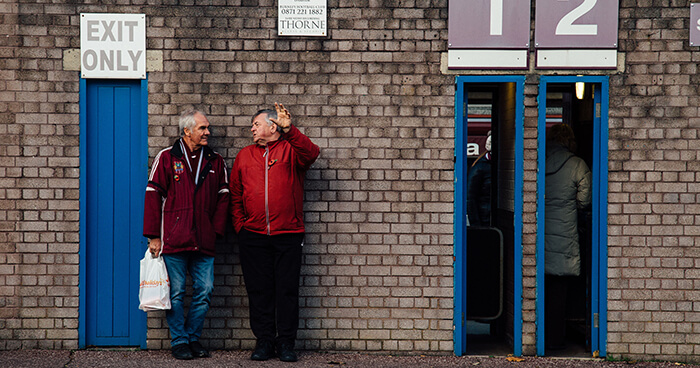 Stories impart us with insight and wisdom. Image: Nathan Rogers.

As the older generations pass on, so do many stories that have important insights and wisdom, which range from staying true to ourselves, to respecting the Earth around us, to keeping peace within the world. Stories provide us with something vital that connects us and inspires empathy for those whose position we have never actually been in. Something that unites us with polar opposites and shows us the greater possibilities for humanity. Our shared human-condition binds us and helps us evolve. Stories help raise the temperature of human awareness and consciousness. It matters that we talk and it matters more that we listen.

After nourishment, shelter and companionship, stories are the thing we need most in the world. – Philip Pullman

In a time when love and understanding are needed more than ever, stories can help build a bridge. After all, change often comes from creating unity and bridges between opposites.

During my time in Ireland, I too listened and shared stories. A fellow traveller told me about a news story from a few years back. It is one which has been largely forgotten and is remembered by only a few. The story began after a British soldier was tragically killed in the UK by two Islamic Extremists. In the wake of the murder, protesters roared in outrage outside a mosque. That was until they were invited in for tea and biscuits – a small offering of peace.

Once inside, the Muslims told their side of the story to the angry mob, they showed that the extremists were not reflective of them, and it wasn’t long before both parties realised they ultimately wanted the same thing: Peace. The protestors saw their shared humanity with the Muslim community, they saw themselves in their story. They realised they were all One. The day, of course, being in England, ended in an impromptu game of football.

The traveller telling this tale had been incredibly moved when he heard the story and proclaimed a near miracle happened in himself. He suddenly saw his own actions with startling clarity. In a time of heightened mistrust, his view of those in different religions shifted, he began reaching out to people he would have otherwise avoided. And as a result, he gained deep, connected friendships. He helped raise the temperature of consciousness. 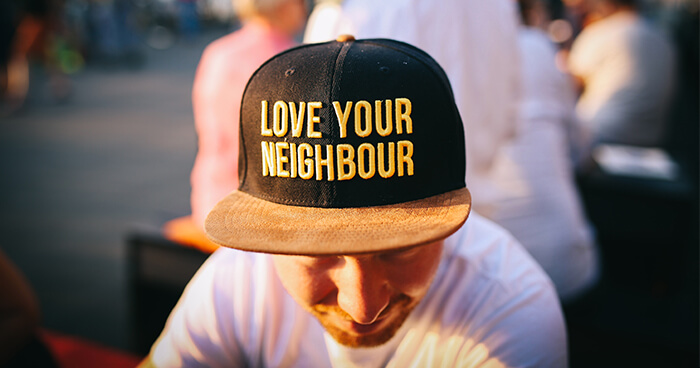 He began reaching out to people he would have otherwise avoided. Image: Nina Strehl.

I am inspired by the personal and collective transformational impact of such stories. What could happen if they were spread more during moments of hardship, anger and hurt? I can only imagine the lives that could be saved, the harmony that could be built: the Unity, Peace, and Love that would be bigger than anything in its way.

A similar theme ran through the stories told to me by the old woman on the bus. She wanted the message of love and peace to live on even when she had left her Earthly body. While many of the tales seemed outrageous, some more myth than truth, there was a depth to them that could not be denied. Some of the tales were passed down to her from previous generations, they had played an important role in the way she conducted her life, and she wanted others to have the same insight. She was sharing her story-tapestry for good. It certainly left a heart-warming impression on me.

As she got off  the bus, she paused and looked back at me curiously, “Does ye believe me?” She asked before disappearing through the doors.

The bus groaned diesel and continued. I craned my head out of the window in search of her somewhere in the distance. She was nowhere to be seen.

‘Did I believe her? Were her stories indeed true?’ I asked myself during the rest of the journey into a land that now held new meaning. I sat with my altered consciousness and knew it did not matter. I was changed, inspired and ready to share my own stories. The words of that old storyteller and philosopher Socrates came to me like a gentle breeze:

I want to know not about this, but about myself. Am I, indeed, a wonder more complicated and swollen with passion than the serpent Typho, or a creature of gentler and simpler sort, to whom nature has given a diviner and lowlier destiny?

And there I was, an Australian woman, surging through the Irish story-filled countryside, swollen with a revitalised passion for self-inquiry. In that moment … I knew I had been blessed with the luck of the Irish.

Share your story-tapestry with us in the comments below…

Love and joy to you all,

As a child, my family moved from Wisconsin to Texas. My dad’s family was there, and us kids got to know them. My grandpa was usually quiet, and would sit outside for hours in the 100 degree Texas heat. I was curious and went outside to sit with him. When I joined him, he would tell stories. I only remember the details of one. Kids used to steal watermelons from a man’s garden. The man got tired of it, and put up a sign that said “one watermelon in this garden has been poisoned.” The next morning, the sign had been changed to say “two watermelons in this garden have been poisoned!” His version had a lot more details, and looking back, I’m not sure if it was true or a joke. What Grandpa left me from his stories were not so much the memory of the details of those stories, but that he opened up and shared who he was as a storyteller and something of a comedian and also memories of a lanky eleven-year-old getting to know her grandpa.

Thank you for sharing your story!

The leap of faith in sharing a drink out of the one grubby can opens doors – risky but rewarding. Thank you for a great story. Yevie.

I watched a video clip today about a worldwide movement called Urban Confessional which promotes people standing in busy streets holding placards with the words “Free Listening” written on them. Many people stop to share their thoughts with these friendly strangers. It’s important for humans to listen to each other. Your story highlights the wisdom and insight that listening to the stories of others can give. Thank you for a timely reminder to us all.

Dear Ashleigh, wonderful story about stories in the more real world of the imagination.

Lovely reminder, thank you!! So true.

Beautiful. thank you for sharing. I agree wholeheartedly.