Stepping into My Meaningful Life

In my early life I made two very important discoveries. In the first place I discovered that making money was easy. And in the second place I discovered that making money and spending it foolishly was completely meaningless. I knew that this was not what I was here for, but at that time (this was many years ago), I didn’t know exactly what I was here for.

It was out of a very deep seeking for a meaningful way of life, and after having walked all one night through the woods, that I came to what I now know to be a very important psychological hump. I felt a complete willingness, without any reservations, to give my life, to dedicate my life to service. I tell you, it’s a point of no return. After that, you can never go back to completely self-centered living. And so I went into the second phase of my life. I began to live to give what I could, instead of to get to what I could, and I entered a new and wonderful world.

My life began to become meaningful. I attained the great blessing of good health; I haven’t had a cold or headache since. (Most illness is psychologically induced.) From that time on, I have known that my life-work would be work for peace; that it would cover the whole peace picture—peace among nations, peace among groups, peace among individuals, and the very, very important inner peace. However, there’s a great deal of difference between being willing to give your life, and actually giving your life, and for me, 15 years of preparation and of inner seeking lay between.

From Farm Girl to Peace Prophet

It was only at this time, in 1953, that I felt guided or called or motivated to begin my pilgrimage for peace in the world—a journey undertaken traditionally. The tradition of pilgrimage is a journey undertaken on foot and on faith, prayerfully as an opportunity to contact people. I wear a lettered tunic in order to contact people. It says ‘PEACE PILGRIM’ on the front. I feel that’s my name now—it emphasizes my mission instead of me. And on the back it says ‘25,000 MILES ON FOOT FOR PEACE.’ The purpose of the tunic is merely to make contacts for me. 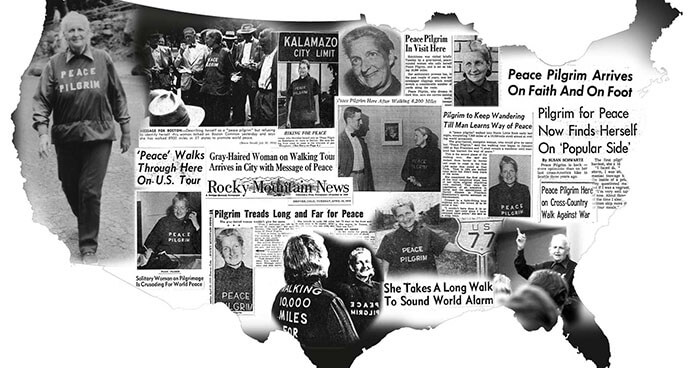 The tradition of pilgrimage is a journey undertaken on foot and on faith.

Constantly as I walk along the highways and through the cities, people approach me and I have a chance to talk with them about peace. I have walked 25,000 miles as a penniless pilgrim. I own only what I wear and what I carry in my small pockets. I belong to no organization. I have said that I will walk until given shelter and fast until given food, remaining a wanderer until mankind has learned the way of peace. And I can truthfully tell you that, without ever asking, I have been supplied with everything needed for my journey, which shows you how good people really are.

With me I carry always my peace message: This is the way of peace: Overcome evil with good, falsehood with truth, and hatred with love. There is nothing new about this message, except the practice of it. And the practice of it is required not only in the international situation but also in the personal situation. I believe that the situation in the world is a reflection of our own immaturity. If we were mature, harmonious people, war would be no problem whatever—it would be impossible. All of us can work for peace. We can work right where we are, right within ourselves, because the more peace we have within our own lives, the more we can reflect into the outer situation.

In fact, I believe that the wish to survive will push us into some kind of uneasy world peace which will then need to be supported by a great inner awakening if it is to endure. I believe we entered a new age when we discovered nuclear energy, and that this new age calls for a new renaissance to lift us to a higher level of understanding so that we will be able to cope with the problems of this new age. So, primarily my subject is peace within ourselves as a step toward peace in our world. 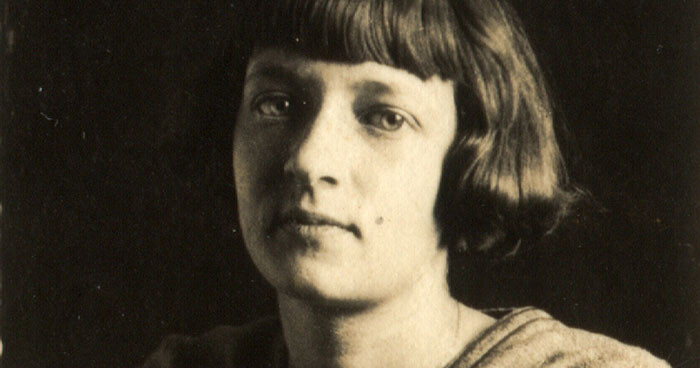 Mildred Norman at 16, before she devoted herself to walking for peace.

Step by Step Towards Inner Peace

Now, when I talk about the steps toward inner peace, I talk about them in a framework, but there’s nothing arbitrary about the number of steps. They can be expanded; they can be contracted. This is just a way of talking about the subject, but this is important: the steps toward inner peace are not taken in any certain order. The first step for one may be the last step for another. So, just take whatever steps seem easiest for you, and as you take a few steps, it will become easier for you to take a few more. In this area we really can share. None of you may feel guided to walk a pilgrimage, but in the field of finding harmony in our own lives, we can share. And I suspect that when you hear me give some of the steps toward inner peace, you will recognize them as steps that you also have taken. In the first place I would like to mention some preparations that were required of me.

The first preparation is the right attitude toward life. This means—stop being an escapist!

But there is also a third preparation that has to do with something which is unique for every human life because every one of us has a special place in the Life Pattern. If you do not yet know clearly where you fit, I suggest that you try seeking it in receptive silence. You begin to do your part in the Life Pattern by doing all the good things you feel motivated toward, even though they are just little good things at first. You give these priority in your life over all the superficial things that customarily clutter human lives.

There is also a fourth preparation, and it is the simplification of life to bring inner and outer wellbeing—psychological and material wellbeing—into harmony in your life. Just after I dedicated my life to service, I felt that I could no longer accept more than I needed while others in the world have less than they need. This moved me to bring my life down to need-level. I thought it would be difficult. I thought it would entail a great many hardships, but I was quite wrong. Now that I own only what I wear and what I carry in my pockets, I don’t feel deprived of anything. For me, what I want and what I need are exactly the same, and you couldn’t give me anything I don’t need. 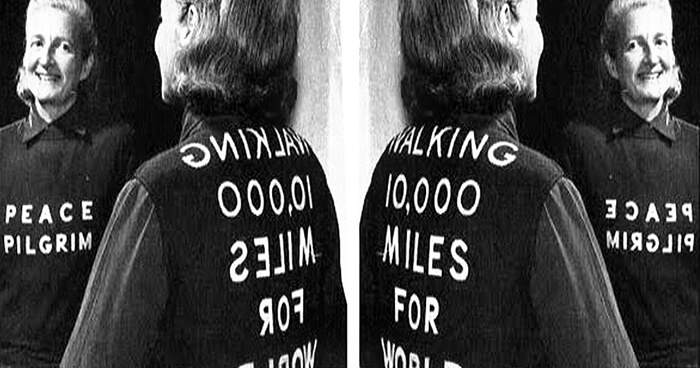 Peace Pilgrim carried only a pen, a comb, a toothbrush, and a map.

Then I discovered that there were some purifications required of me. The first one is such a simple thing: it is purification of the body. This has to do with your physical living habits. Do you eat sensibly, eating to live? I actually know people who live to eat. And do you know when to stop eating? That is a very important thing to know. Do you have sensible sleeping habits? I try to get to bed early and have plenty of hours of sleep. Do you get plenty of fresh air, sunshine, exercise, and contact with nature?

The second purification I cannot stress too much because it is purification of thought. If you realized how powerful your thoughts are you would never think a negative thought.

Now, the last part. These are the relinquishments. Once you’ve made the first relinquishment, you have found inner peace because it’s the relinquishment of self-will. You can work on this by refraining from doing any not-good thing you may be motivated toward, but you never suppress it! 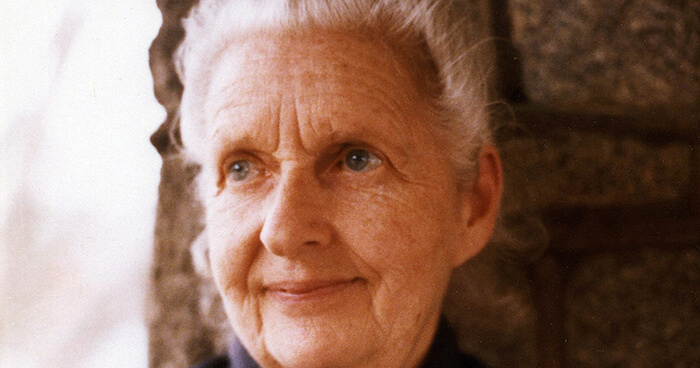 Peace Pilgrim continues to inspire many to be of service.

The second relinquishment is the relinquishment of the feeling of separateness. We begin feeling very separate and judging everything as it relates to us, as though we were the center of the universe. Even after we know better intellectually, we still judge things that way. In reality, of course, we are all cells in the body of humanity. We are not separate from our fellow humans. The whole thing is a totality. It’s only from that higher viewpoint that you can know what it is to love your neighbor as yourself.

Then there is the third relinquishment, and that is the relinquishment of all attachments. Material things must be put into their proper place. They are there for use. It’s all right to use them; that’s what they’re there for. But when they’ve outlived their usefulness be ready to relinquish them and perhaps pass them on to someone who does need them.

Now the last: the relinquishment of all negative feelings. I want to mention just one negative feeling which even the nicest people still experience, and that negative feeling is worry. Worry is not concern which would motivate you to do everything possible in a situation. Worry is a useless mulling over of things we cannot change. Let me mention just one technique. Seldom do you worry about the present moment; it’s usually all right. If you worry, you agonize over the past which you should have forgotten long ago, or you’re apprehensive over the future which hasn’t even come yet. We tend to skim right over the present time. Since this is the only moment that one can live, if you don’t live it you never really get around to living at all. If you do live this present moment, you tend not to worry. For me, every moment is a new opportunity to be of service.

Peace Pilgrim began her second pilgrimage on January 1, 1955. Over the next few years, she walked 100 miles in each of the then 48 states and also in Mexico and Canada, ending each segment in the state capital. This short clip is a newsreel shot in Ames, Iowa in November of 1955. Peace Pilgrim was killed in a traffic collision in 1981. She had crossed the United States seven times in her 28 years of walking for peace.