Snippets of Inspiration from Maya Angelou

If there has ever been a woman who could be described as phenomenal, it would be Dr. Maya Angelou. Despite leaving her physical body on May 28, 2014, at the age of 86, her legacy lives on through her inspiring words which continue to lift hearts all over the world.

Maya Angelou was a powerhouse who gave us the gift of words so powerful that I often hold my breath when I read them. A prolific writer, she was the author of over 30 books and the recipient of more than 50 honorary degrees. Her first book, I Know Why the Caged Bird Sings, a powerful memoir of her experience of sexual trauma, was released in 1969, long before #MeToo and #TimesUp. Her mother’s boyfriend raped her as a child and was later beaten to death, causing Angelou to stop talking for a time, in fear of the power of her own voice.

She rediscovered the power of words at the age of 40 when she started putting pen to paper. One of her most inspiring poems, ‘Still I Rise’, gives me goosebumps every time I hear it. This was a woman who was deeply connected to her roots and knew her own worth. This was a woman who was not afraid to fight for what she believed in, and who, despite all of the hardships in her life, believed in the good in the world, and above all, in the transformative power of love.

Maya Angelou is not what she has done or written or spoken, it’s how she did it all. She moved through the world with unshakeable calm, confidence, and a fiery, fierce grace and abounding love. 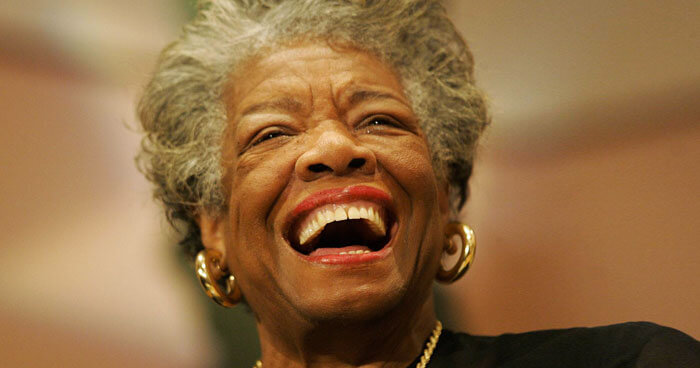 Dr Maya Angelou was an embodiment of love.

The literary legend led a rich and extraordinary life. She was a cook, sex-worker, dancer, actor, playwright, and opera actor before she became a writer. All of these experiences helped to shape her writing, her ability to touch the pulse of life, and bring us all to our knees.

Born in St. Louis in 1928, Maya Angelou had an unmistakable rhythm to her soul, a deep strength that held her up and the ability to make words dance. Just like a phoenix, she faced adversity in her life, and rose, again and again, from the ashes.

Having lived her life to the fullest against all odds, Maya Angelou fought to show the world the truth of what she believed– that every life counts and “it takes each of us to make a difference for all of us.” Today, we’re sharing inspiration from the great woman herself, so that we can all rise together.

Inspiration from a Poet that Will Make Your Heart Sing

On life:
My mission in life is not merely to survive, but to thrive; and to do so with some passion, some compassion, some humor, and some style.

On the power of perspective:
If you don’t like something, change it. If you can’t change it, change your attitude.

On the power of forgiveness:
It’s one of the greatest gifts you can give yourself, to forgive. Forgive everybody.

On having your own back:
I learned a long time ago the wisest thing I can do is be on my own side, be an advocate for myself. 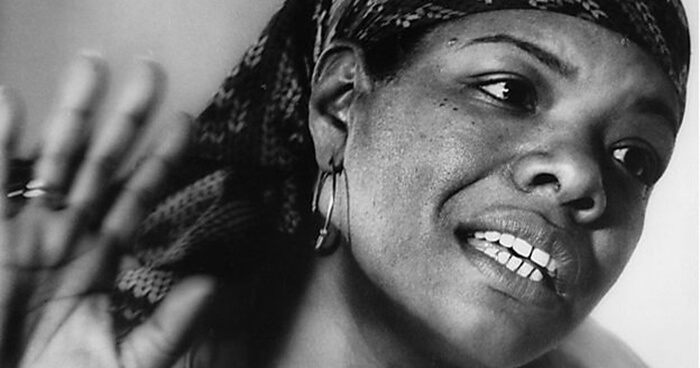 On finding the balance:
A wise woman wishes to be no one’s enemy; a wise woman refuses to be anyone’s victim.

On the importance of courage:
One isn’t necessarily born with courage, but one is born with potential. Without courage, we cannot practice any other virtue with consistency. We can’t be kind, true, merciful, generous, or honest.

On the value of each and every action:
I’m convinced of this: Good done anywhere is good done everywhere. For a change, start by speaking to people rather than walking by them like they’re stones that don’t matter. As long as you’re breathing, it’s never too late to do some good.

On aging your own way:
The most important thing I can tell you about aging is this: If you really feel that you want to have an off-the-shoulder blouse and some big beads and thong sandals and a dirndl skirt and a magnolia in your hair, do it. Even if you’re wrinkled.

And finally, on herself:
I would like to be known as an intelligent woman, a courageous woman, a loving woman, a woman who teaches by being.

Thank you for lovely homage to a wonderful and valuable woman. I have successfully introduced a course devoted to her literary treasures in my high school. I’m starting in September, and I am honored to introduce my students to her inspiring world of words.

Please listen to her on a tape called
“Making Magic in the World
,,,,interviewed I think by a guy called Thoms( he wisely let her talk and talk and talk – it was Magic )
She speaks of her grandmother, who was fierce and sometimes harsh but a woman who stood with Maya and believed she could one day be a Preacher( this was during her non verbal phase when her body was in shock ).
Magic magic magic,,,
We all need someone to believe in us and sing our song until we find our voice.

Through all her hardships and pain, she rose as a bright light in our world! I love her strength and wisdom, her great example to us all. Her poems are so inspiring, you can actually feel pain or triump in them.

I met Maya Angelou once when she came to give a lecture at the university I was attending. Exeter, England. She came in like the biggest light I had ever witnessed in a person. She literally radiated. About 20 of us went to hear her speak to our year. She went round the room asking us for our full names. She spoke about honesty. Being honest with your life, your truth, yourself. She said honesty was the hardest thing. Later I raised my hand to ask a question and she said “Yes Miss Green?”. She had remembered my name.
Truly one of the most incredible, inspirational women I have ever had the honour to come across. I shall never, ever forget her.

I read Still I Rise and loved and admited her from that moment on. She ispires me tobgrow and bring love, peace and wisdom too.

She was a gift to us all!

That is very effective articall and really very motivative…. Sometime we need a force for pushing us to do something… And that articals help us to think critically

I was unaware that you had pAssed over. You have been an inspirational to me for many years. I just wanted to say thank you for your wisdom that you Continue to share and bless us with. You will be missed

…to love is to inspire others, she’s done it all her life…what a great woman, what a magnificent human being !

Sometimes you just need a Maya Angelou in your life to keep you grounded and moving in the right direction all at the same time. Her words are freeing and uplifting, always timely and inspirational! Just what I needed today!!! Thanks, UPLIFT!