Seeds of Trust: Co-Creating a Culture of Peace in the Middle East

BY Amir Paiss
Welcome to UPLIFT
Stories of Love
Seeds of Trust: Co-Creating a Culture of Peace in the Middle East
Two friends are sitting in their homes, 60 kilometres apart, one in Tel Aviv and the other one in Gaza...

They can hear the rockets being launched and the bombs being dropped, the cries of their frightened children and their own racing hearts. Their surroundings are fearful and judgemental and loud with chaotic noise that is threatening to drown the music they both love to listen to and know how to play. It is a challenge to remember their basic Human-ness in the midst of all this violence around them, and not to be swallowed by the waves of demonisation and alienation of the other.

They are not angry… they are simply sad.

They grieve the loss of lives on both sides, and it is in this deep sadness that a spark of new inspiration begins to rise, a memory that helps them begin to change the cacophony of war to the possible harmony they know exists…

They recall their mutual love for music and how their meeting in a festival years before in Europe connected them immediately despite their different backgrounds:

…that spontaneous jam session around the fire, where their two instruments came together without rehearsals and discovered how they complemented one another…

…how together they were able to co-create a new song… a greater song than the one either could have played on his own.

They are praying for the madness of war to end; they know that violence is so limited. From where they stand it is hard to see, but they know in their heart that only Peace is limitless. They need no proof, in fact they realize on a small scale they are already living proof through the kinship and friendship they feel, through the music they co-create, and the compassion they feel for one another.

And so they make a vow to begin to co-create a culture of Peace within themselves, within their families, within those in their communities who are also ready. They refuse to be enemies and they recommit to educate and create a vision for a new future with their children. It is a promise that they made years ago without knowing it, when their instruments first wove them together in song. And now is the time to fulfill this promise on all levels.

After the clouds of dust settle, the sounds of sirens fade out, and the echoes of explosions turn to heart beats, we are left with the exhausting pain and the shocking rubble that is a testimony of the destructive force of war.

Sages have known since time immemorial that our perception determines our reality. It is said that beauty is found in the eyes of the beholder when beauty is what we are looking for. So too is violence and hatred found through a world view that we are separate from each other and that peace results from fighting. In some way we have all been conditioned to perceive a world of separation. And if our identity is based on such a perception, we are bound to see ourselves as different from our fellow beings and fearful of our environment.

This is our human predicament and, some will say, our evolutionary challenge: an opportunity to see beyond our conditioning and awaken to new possibilities, free from the shackles of fear, free from a history hurt, anger, and misunderstanding.

What is Beyond Our Conditioning?

The truth is: We are not separate.

We are not separate from our environment nor from each other. Science now shows us what the great Sages and Mystics have always known, embodied, and shared: We are One, interconnected and interrelated: with each other, with our planet, with the creative forces of the Universe.

The Middle East has been a war zone for far too long and has real issues to be addressed. In the insightful words of Ali Abu Awad:

One thing that is becoming increasingly clear to a great many people is that the violence that has dictated the course of events over the past many centuries is not a sustainable path to life for anyone or any country. It is clear that the freedom, safety, and security of both Israel and Palestine are interwoven with each other and a new pathway is required.

In some ways this feels like the darkest hour, but this hour has called forth an unprecedented level of passion, commitment, and the light of many to forge and discover a new way. Bold new pathways of collaboration and co-creation are already happening, in motion, sprouting up all over the planet, from within the hearts of people. In the midst of the war, a call to action is being heard: people are gathering and cultivating an alternative.

Where do We Begin?

Peace concerts, global gatherings, and peer to peer initiatives such as the Vision Camp of ‘We Refuse to be Enemies’, are powerful examples for real actions that are already rippling and reverberating throughout the world. We can all contribute to this wave of change, no matter where we come from, simply by expanding the way we relate to ourselves and to each other. It is not only the war ‘out-there’, it is also the war within the hearts and minds of each and everyone of us. We’ll never thrive as long as our neighbours cannot, wherever we live, whatever our nationality.

This is how we begin to embody the change we want to see in the world:

By recognizing that we are all so much more the same than different, regardless of our nationality, our opinion, our proposed solutions, our emotions and thoughts. 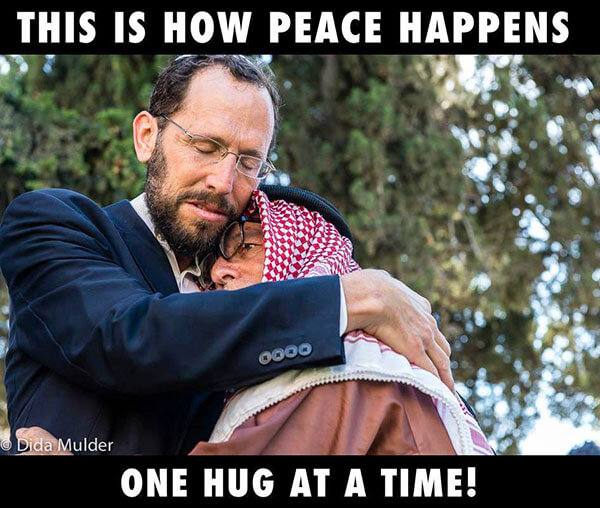 We are ALL ONE

And the only way to create peace in the world is to walk a path that is peaceful.

No missile can deny this. No war can destroy this. No fear can disguise it.

The path to peace is being peace.

In this spirit we are all being called to UPLIFT one another and help build a culture and language of Peace, and together to write a new chapter in our living story: one where World Peace begins with each of us.

We’d love to hear in the comments below, on Facebook, or wherever you feel called to share:

What is one thing you can do today to bring more peace into your life and the world around you?

this is way funny ! LOOOL

What’s up, the whole thing is going fine here and ofcourse every one is sharing facts,
that’s really fine, keep up writing.

Simply want to say your article is as surprising.
The clearness in your post is just nice and that i could assume you are a professional on this subject.
Fine with your permission let me to seize your feed to keep updated with approaching post.
Thank you a million and please keep up the gratifying work.