Scientists Discover Trees Have a Heartbeat

Until now, scientists thought water moved through trees by osmosis, in a somewhat continuous manner.

Now they’ve discovered the trunks and branches of trees are actually contracting and expanding to ‘pump’ water up from the roots to the leaves, similar to the way our hearts pump blood through our bodies.

The only difference between our pulse and a tree’s is a tree’s is much slower, ‘beating’ once every two hours or so, and instead of regulating blood pressure, the heartbeat of a tree regulates water pressure. András Zlinszky, of Aarhus University in the Netherlands told New Scientist:

In his 2017 study, Zlinszky and his colleague Anders Barfod used terrestrial laser scanning to monitor 22 tree species to see how the shape of their canopies changed.

The measurements were taken in greenhouses at night to rule out sun and wind as factors in the trees’ movements.

In several of the trees, branches moved up and down by about a centimeter or so every couple of hours.

After studying the nocturnal tree activity, the researchers came up with a theory about what the movement means. They believe the motion is an indication that trees are pumping water up from their roots. It is, in essence, a type of ‘heartbeat.’ 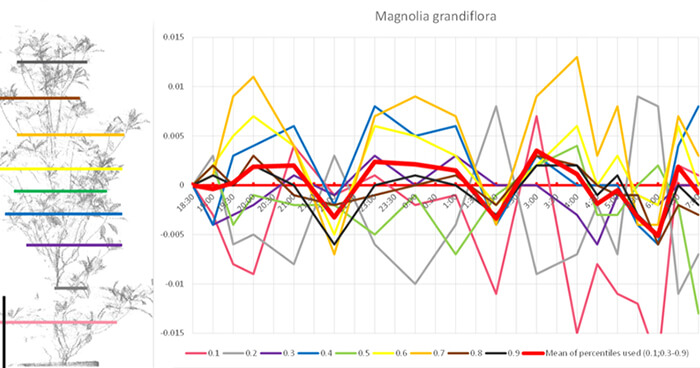 Here’s the change of movement charted in a magnolia tree. Image: András Zlinszky/Twitter

Zlinszky and Barfod explain their theory in their newest study in the journal Plant Signaling and Behavior. Zlinszky told New Scientist:

In classical plant physiology, most transport processes are explained as constant flows with negligible fluctuation in time. No fluctuations with periods shorter than 24 hours are assumed or explained by current models.

But the researchers still don’t fully understand how the ‘pumping’ motion works. They suggest maybe the trunk gently squeezes the water, pushing it upwards through the xylem, a system of tissue in the trunk whose main job is to transport water and nutrients from roots to shoots and leaves.

Trees ‘Go to Sleep’ at Night

In 2016, Zlinszky and his team released another study demonstrating that birch trees ‘go to sleep’ at night.

The researchers believe the dropping of birch branches before dawn is caused by a decrease in the tree’s internal water pressure. With no photosynthesis at night to drive the conversion of sunlight into simple sugars, trees are likely conserve energy by relaxing branches that would otherwise be angled towards the sun.

These birch movements are circadian, following the day-night cycle.

Their new discovery is something entirely different, they say, because the movements happen at much shorter intervals.

My charity ‘Right from the Start’ has been gifted a device to support one of the books in the Helping Parents Shine series called ‘Children and the Natural World. The wonder that inspires the human heart.’
It picks up the pulsing energy of a growing plant and translates it into different musical sounds:the strength and volume of which depend upon close-by human care. (Not just sun and rain!) I urgently need to find an exceptionally sensitive electro-engineer to simplify and make the device child- friendly so that it can be mass-produced easily and cheaply and purchase costs minimised. Please contact me through Website: http://www.right-from-the-start.org.

Aarhus is in Denmark!