Located at the outskirts of Rajaji National Park, Maharishi Mahesh Yogi’s ashram in Rishikesh gained global fame in the late ’60s after a visit from The Beatles. George Harrison, John Lennon, Paul McCartney and Ringo Starr, along with an entourage of wives, girlfriends, managers and reporters, went on an 8-week-long pilgrimage to learn Transcendental Meditation from Maharishi Mahesh Yogi–a pilgrimage which had a tremendous affect on the way that Eastern philosophy and spirituality was looked upon and practiced in the West.

Having been abandoned for numerous years and overrun with trees and shrubbery, the Ashram was reopened to visitors recently and Beatles fans who often made trips to the spot, many leaving behind devotional graffiti as tribute to the celebrated rock band.

Watch: Murals at The Beatles Ashram

When street artist Pan Trinity Das visited Rishikesh back in 2012, he left behind what is called The Beatles Cathedral Gallery, a community art project, of sorts, which is “dedicated to the re-activation of the Satsang Hall in the abandoned Maharishi Mahesh Yogi Ashram.” It is said that The Beatles wrote close 40 songs during their stay in Rishikesh, which went on to feature on the ‘White Album’ and ‘Abbey Road,’ including Blackbird, Back in the U.S.S.R., Revolution, Dear Prudence and Sexy Sadie, which Lennon is said to have written about the Maharishi himself.

The project was shut down initially upon the intervention of the forest guards but was revived and carried on by volunteers and artists from all over the world. Miles Toland was among four artists who were invited to revive this abandoned Ashram with a history of its own. In February 2016, Toland visited the Ashram in Rishikesh transforming the once dilapidated and cracking walls into beautiful pieces of art. A globe-trotting artist, Toland’s no stranger to India, having visited and even lived here on a number of occasions, and it was his wall murals in Pune that really caught the attention of Indian audiences. 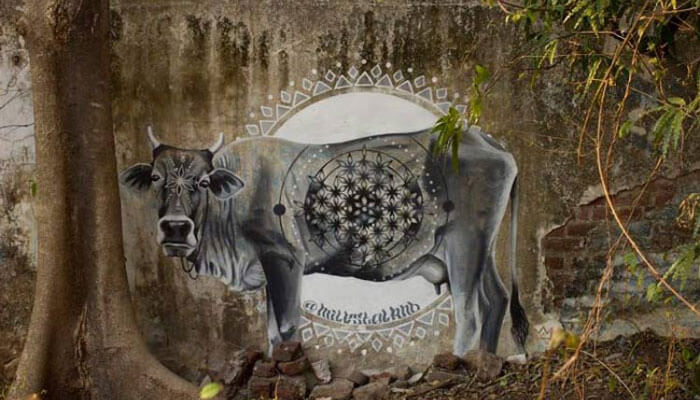 We got a chance to catch up with Toland who spoke to us about his experiences in Rishikesh, his artistic style and how he got involved with the Beatles Ashram Mural Project.

Could you tell us about this artists’ collaboration to rejuvenate the Beatles Ashram.

“Like most good things that happen for me in India, the seeds were planted at the Vaayu Vision Collective Art Residency program in Goa. I met the two lovebird masterminds behind the Beatles Ashram Mural Project, Pan Trinity Das and Kyrie Maezumi, when I was helping produce an event at Vaayu. They had already been painting and going on pilgrimages to the Ashram for several years starting out with guard bribes and eventually getting groupie-level guard respect due to major media hype and public interest. 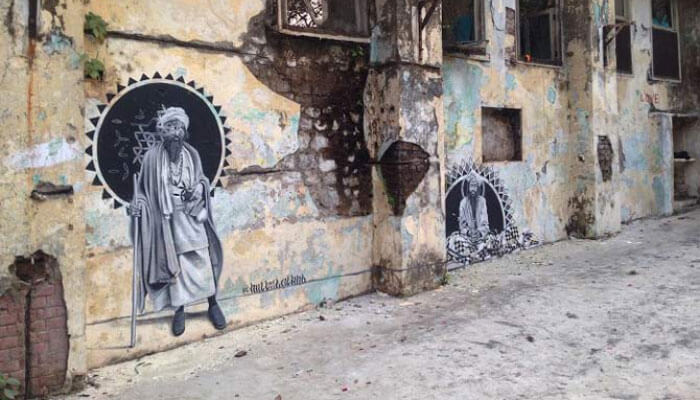 This year was the first time Pan and Kyrie (also known together as ‘You.Only.Always’) reached out to different visual artists to help expand the scope and interest of the project. Anyone who has visited the Ashram immediately senses its unique energy, lingering history, and the striking reclamation of nature decomposing the complex. But it took You.Only.Always to recognise and act upon the potential energy for murals in this complex.”

What was your first reaction when asked to paint murals at this Ashram?

“Painting the Beatles Ashram is a wet dream for any street artist. My first reaction was awe and amazement mixed with a bit of, ‘is this too good to be true?’  The name and history has strong magnetism let alone the raw beauty of the weathered walls! But I have a tendency to get tangled in fantasies, especially in India, so I tried not to expect too much and let the realism of the situation unfold once I was physically there. Nevertheless, I arrived in Rishikesh for my first time in February and was immediately welcomed with kindness, synchronicity, and a refreshingly clean Ganges that filled me with manic inspiration and good vibes.” 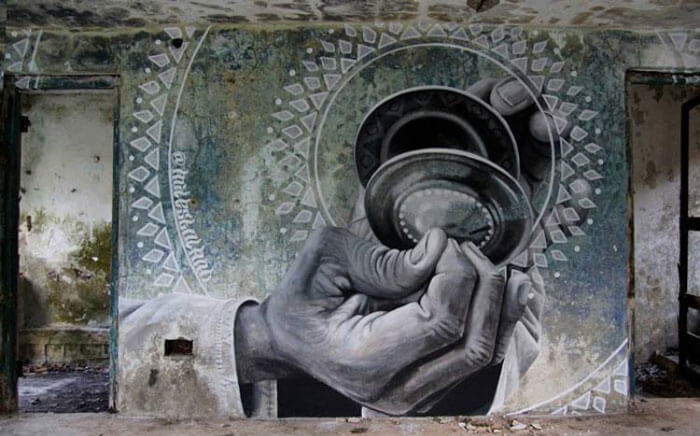 Tell us about your creative process and the murals you made at the Beatles Ashram.

“My creative process was a feedback loop between the street culture of Rishikesh and the beauty of the Ashram. I would wake up in Ram Jhula, go out into the streets for chai, breakfast, a dip in the Ganga, and interacting with locals. During this morning ritual I would capture Sadhus, musicians, vendors, and animals with my camera phone, print out a picture of the most exciting photograph, walk to the Ashram with my painting briefcase, and create a mural on one of the many beautiful walls in the complex until sundown, when the tigers and elephants were rumored to lurk about and eat street artists.

I gave myself a personal challenge to create a mural a day for one week as a way of exploring a lot of content without striving for perfectionism or stumbling through my tendency to overthink. This was most definitely a challenge but with huge rewards. The project has modified my methodology and trust in my practice. I decided to paint three more murals after my week long challenge totaling 10 murals in 12 days–I was temporarily possessed by something fierce.” 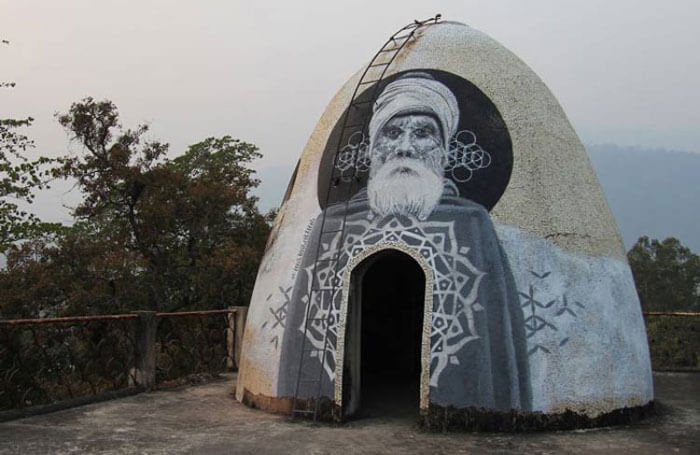 Could you explain the use of Mandalas and geometric patterns in some of the murals.

“Mandalas and geometric patterns represent for me the underlying harmonic order of life, which I believe is consciousness. Reality naturally organizes and propagates itself with the aid of mathematical patterns. I am personally drawn to the sacred geometry known as the flower of life because of its cross cultural usage, vast meaning, and its practicality when painting street art efficiently. All I need to make the complex pattern is a pin and a shoestring, or something circular like a CD or trashcan lid that I can usually discover on site.

I am fascinated by the Rishikesh Sadhus that I have adorned with these mandalas and geometries because of their intentional lifestyle choices.

To me, spirituality comes down to the way you live and not the information you preach. I befriended a few outstanding Sadhus that may have been homeless beggars to the unobservant but were actually reverent and kingly beings that taught me about generosity, trust, and the power of positivity. The Sadhus I painted are dissolving into geometry because the act of begging, the experience of meditation, and the renunciation of material, can all be seen as the process of losing your ego and trusting that the universe will provide what you really need; harmony and consciousness.” 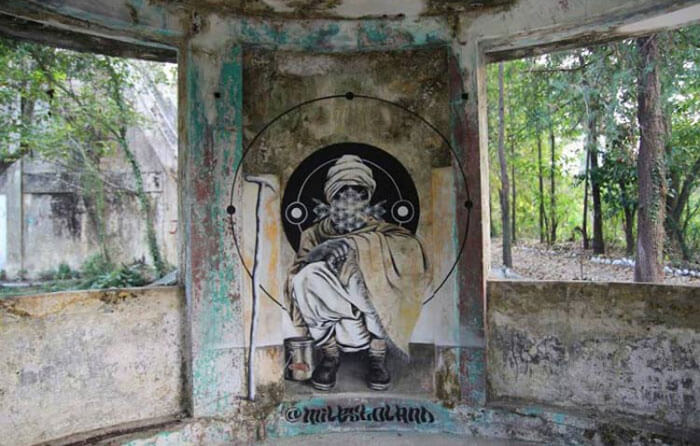 And we just have to ask, which is your favourite Beatles song?

“I Am The Walrus has always fascinated me with its poetic absurdity. There are so many obscure references and cryptic autobiographical allegories that the meaning may only have been fully understood by Lennon himself. But for me, the whole ‘I am the eggman, I am the eggman, I am the walrus, goo goo g’ joob’ chorus became much more personal as I was painting a Sadhu on a massive meditation egg at the Ashram. I even felt that the Sadhu’s moustache and beard could represent the low hanging tusks of a walrus.” 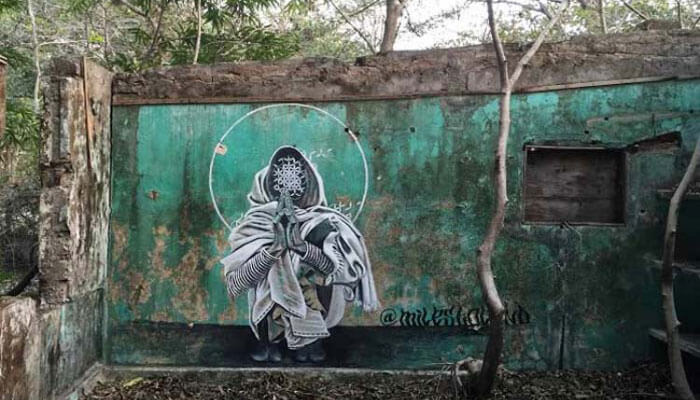 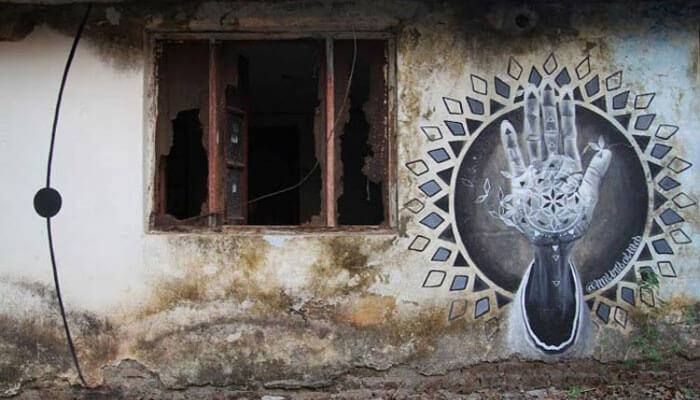 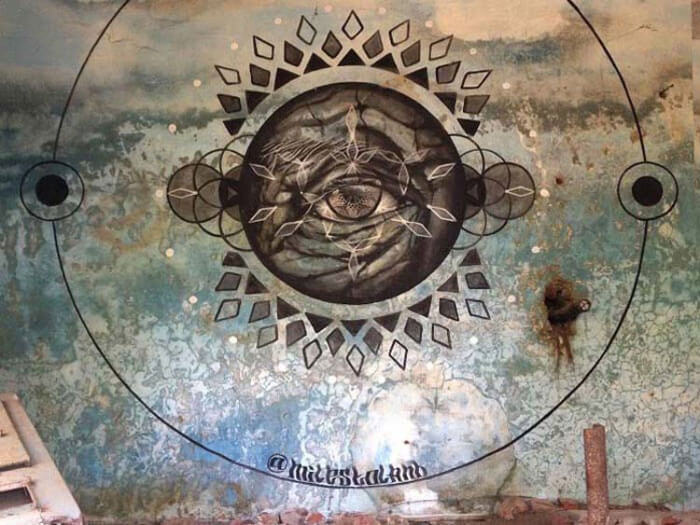