BY Mark Heley
Welcome to UPLIFT
Stories of Love
Restoring the Natural Rights of Mother Earth
Representatives of different indigenous traditions came together at Uluru to deliver an urgent message to the World; we need to Restore Mother Earth

Having people visit here, like these elders – they don’t do this sort of trip for nothing. They get their directions straight from the Mother.
– Jarmbi, Githabul/Ngarakwal tribe

In late 2014, representatives of the original people of La Sierra Nevada de Santa Marta came down from their sacred mountain in Columbia to deliver an urgent message and sacred invitation to Humanity on behalf of Mother Earth. The following shares a glimpse into the origin of their mission and the vital essence of their journey to bring us back into alignment with Life Originating Principles.

When the Spanish first arrived in Colombia in the 16th century, they found an advanced civilization practicing sustainable farming and producing extraordinary gold and pottery work. When these people were driven into the mountain by conquistadors in the 16th century, they chose to stay there in isolation in order to protect their culture and maintain the ecological and spiritual equilibrium of the mountain.

Living by a deeply ecological philosophy (which they call the ‘Law of Origin’) that guides their relationship to nature, animals and the movements of the planets and stars, the original people of La Sierra Nevada de Santa Marta have continued to live much in the way they have always lived from the very beginning. Through daily meditations, sacred ritual and spiritual discipline, they maintain a deep connection to Mother Earth and a commitment to preserving and restoring her vitality in the region and the world.

Known to many as Guardians of the Earth, the four tribes of the region believe that La Sierra Nevada de Santa Marta is a barometer for the rest of the planet… If rivers run dry or animal species disappear in La Sierra Nevada de Santa Marta, so too will rivers run dry and animals disappear in the rest of the world. In recent decades, the encroachment of modern civilization – including land development, deforestation, mining, drug crop cultivation and civil war (to name a few) – has called the people to come back into the World with an urgent message. 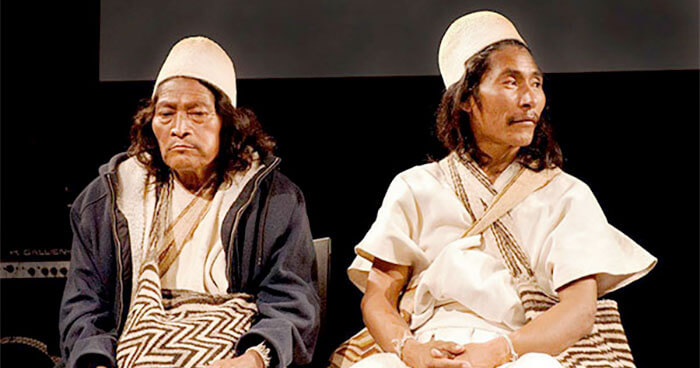 Late in 2014, Elders of Munvwameke and Numaka, Nabusimake sent representatives (including spiritual leader or ‘Mamo’ Miguel Arroyo – Iku and leader of the Iku Nation, Ñankwa Chaparro) to join with elders and wisdom keepers of other tribes and lands to initiate a ‘Unification Process for the awareness in collective consciousness of Life Originating Principles’. They came with the focus of activating healing in key sacred sites and to call forth humanity to realize that it is time to reclaim our connection to the Original Constitution of Mother Earth. The Earth is calling for our help and it is time for us all to answer.

Many of us are working for human rights and the rights of nature within legal frameworks locally and nationally. Yet even before any of these legal frameworks were created, Mother Earth was birthed with her rights to her natural constitution… Just like when the human being is born we are born with rites… So the mission statement would be to return the original rites of mother earth back to her natural constitution. Understanding too that we are part of this natural constitution of Mother Earth.
– Nelson Caraballo, in function of the Mother as well as the Spiritual Authority of Munvwameke.

Joined by representatives from the Otomi and Mexica in Central America and Diné from North America, the Mamos journeyed to sacred sites in Durango, Colorado in the US; Mt. Fuji, Japan; and Uluru, Australia. There were two fundamental aims: to bring healing and activation to these key energetic centers of the planet and to raise human consciousness toward the need for unification; calling forth humanity to join them in a deep personal commitment to heal and restore Mother Earth. 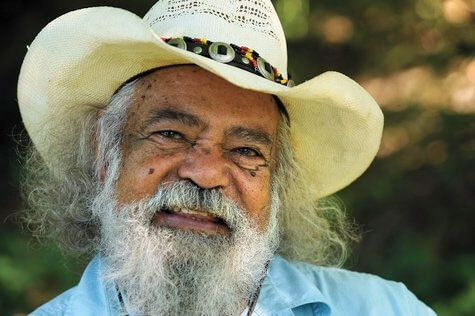 The whole aim of both our cultures is to let the world see that they too belong to the same family and to start caring for the land, for the environment, for the waterways, the mountains, trees and every other living thing on the land as their brothers and sisters and other family members… That’s the way our people teach us when we are growing up. You are not owners of anything. Mother Earth owns you and you look after her just the same way that you would look after your mother here.
– Uncle Bob Randall, Yankunytjatjara Elder and a traditional caretaker of Uluru

During their time in Uluru, the group (including representatives of the original peoples of La Sierra Nevada de Santa Marta in conjunction with representatives of the Otomi and Mexica from Central America and Diné from North America) together wrote a formal invocation to humanity which has been titled The Declaration to Restore Mother Earth.

From Uluru, the group journeyed to the easterly most point of Australia in Byron Bay, where they were greeted by members of local and regional indigenous tribes and welcomed to UPLIFT 2014. On Sunday the 14th of December, the festival participants and webcast audience around the world paused in profound silence, joining hands in a great circle as The Declaration to Restore Mother Earth was read aloud. Each person was invited to listen deeply to their own unique calling and to recognize the critical role we each play in bringing about the healing and restoration of our planet. 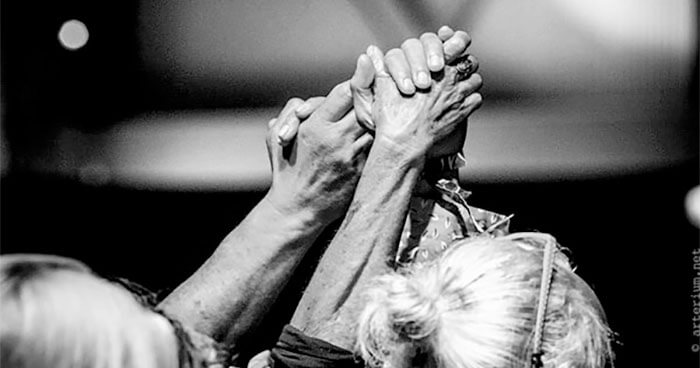 Joining hands during The Declaration to Restore Mother Earth at UPLIFT

As a first step, the representatives of the people of the Earth of La Sierra Nevada de Santa Marta invite us to join them in signing the Declaration to Restore Mother Earth. As a second vital step, we must each be willing to examine our own relationship to Mother Earth and discover the simple yet profound steps we can each take to contribute to the healing and vitality of our planet on a daily basis.

If you knew that that your thoughts and actions, energy and intentions played a critical role in the vitality of our planet, what simple action could you take today to honor your relationship and the sacred rites of Mother Earth?

Always a large fan of linking to bloggers that I enjoy but really don’t get a lot of link love from.

Very thoughtful article, and much to learn from.

How many comments do we really want to show here? It seems like there is enough already…. And they really are actually pretty lame comments

I liked the article anyway. These guys are on a mission from god!

“Columbia?” “…born with rites?” “…easterly most?” If something is woth saying, it’s worth spelling correctly. Form affects function. When you publish an article with so many errors, you undermine the message.

0
Reply
View Replies (1)
PrevPreviousIntegral Dreaming, Collective Awakening
NextListening with the Heart to those Who Cannot SpeakNext