Out of the Box Peacemaking

BY Amir Paiss
Welcome to UPLIFT
Stories of Love
Out of the Box Peacemaking
Why the Best ‘Revenge’ is Love.

Eliyahu McLean is the director of the Jerusalem Peacemakers, a network of religious leaders and grassroots peace-builders intending to build cultural bridges and co-create communities of Peacemakers through cross-border and dual-narrative events that initiated, amongst other projects, the annual ‘Jerusalem Hug’, an event that brings together Israelis, Palestinians and internationals to pray for peace around the walls of the Old City of Jerusalem.

Born to a lineage of priests from his father’s side and to a lineage of Rabbis from his mother’s side, while both of his parents were disciples of an Indian Guru, his upbringing was filled with universal values and interfaith understanding. The yearning for Spirit and Purpose took him places: From Hawaii to Israel, then back to the U.S and Middle Eastern studies in UC Berkeley, connecting with Islam and Sufism while travelling in Egypt, via Reb Shlomo Carlebach’s and Jerry Garcia & The Grateful Dead’s music, through the teachings of Hasidic Judaism, including an encounter with the Lubavitcher Rebbe in Brooklyn, until he found himself back in Jerusalem, inspired and dedicated to Peace-making and spiritual healing between the children of Abraham. Eliyahu was initiated as a ‘Rodef Shalom’ (Peace Pursuer) by the late Reb Zalman Schachter-Shalomi. 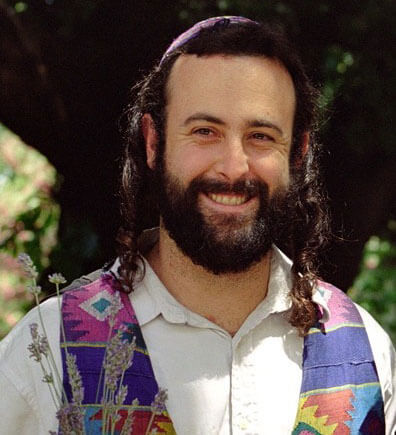 I asked Eliyahu to share some insights regarding Peacemaking in the Middle East through the choice of Love. This is what he shared:

“I’ll give you an example. Right before the Gaza war, after the three Israeli teenagers Naftali Fraenkel, Gilad Shaer and Eyal Yifrah were kidnapped and murdered and after Muhammad Abu Khdeir was kidnapped and murdered in revenge, there were riots all over Israel. I was coming back with my wife and our two little children from the Galilee to Jerusalem, in a bus full of Hasidic Jews when, at around 2 am, our bus stopped at a stop light and we were attacked by angry Arab men, throwing Molotov cocktails and rocks onto and into the bus… People scream in terror, windows shatter…

Miraculously we managed to escape without severe physical harm. The next morning I was told by many – ‘Now you experienced first hand the hate, and now you know that the right response is revenge!’ ‘Yes’ I replied, ‘you’re right, we have to have revenge!’

That morning I had already been planning to meet with Haj Ibrahim Abu El Hawa and Raed Hashima who is the East Jerusalem coordinator for Jerusalem Peacemakers and the Abrahamic Reunion. I was very shaken up, but we met anyway and worked hard to prepare an interfaith gathering to be held two weeks later in Nazareth, at the home of Sufi Sheikh, Ghassan Manasra.

Sure enough, we had a very powerful event, with Jews, Christians, and Muslims, Israelis, and Palestinians, praying side by side and supporting one another. We then had a walk of love, holding hands and walking through the streets that witnessed a riot a day earlier. At the end of the evening I shared my experience with everyone, and how some of my friends told me that my best response has to be revenge… well, this powerful gathering, when we come together in connection and harmony, demonstrating what can be, in the midst of war and violence, is the best revenge. The revenge of Love!

It is the revenge against seeing Muslims and Palestinians as the enemy or seeing Israelis and Jews as the enemy. Fear and hate and ignorance, that’s the real enemy, and we are gathered here for Love, which is the most powerful and effective tool for resolving any conflict. One of the highest teachings in Judaism is to get to the place of Not Knowing. The orthodox Rabbi David Hartman said that the Middle East is under the tyranny of certitude. Everybody is so certain about their positions, opinions, and narrative. What we are working toward is building a feeling of a family, of humanity, of connection and the honouring of each other’s culture and tradition regardless of any political views.

We are choosing love, not for an outcome but for the actual creation of a different reality, where cynicism cannot overshadow the real connection of Love. The norm is fear and separation, but Love is the greater reality. I don’t have to judge those who fear, I can feel compassion for them. There are wounded and traumatized people that continue to wound and traumatize others, as revenge. We don’t ignore the trauma or judge it. We find ways to heal through the revenge of Love.

This could be a fable, but it is all real: The Lubavitcher Rebbe, Jerry Garcia & The Grateful Dead, Kabbalah and Sufism, all meet in the heart of one passionate Peacemaker.

Stellar work there everyone. I’ll keep on reading.

Learning happens thourgh exposure such a pertinent point. But fear keeps so many people from allowing themselves to know something personally. We’d rather watch it on TV and say we know it. Such a false knowledge. A knowing/understanding does happen around a table of shared food! Love that point too. Hard for picky-eaters, but true nonetheless.

0
Reply
PrevPreviousSatish Kumar: My Life is Guided by Friendship
NextAutobiography in Five Chapters – A PoemNext